The National Farmers’ Union has elected Minette Batters as the first female president in the organisation’s 110-year history.

Ms Batters, a Wiltshire beef, sheep and arable farmer who has also diversified her business into weddings and catering, was previously the NFU’s deputy president.

She becomes the first woman to hold the top job at the organisation, which represents more than 50,000 farmers and growers in England and Wales, since it was founded in 1908.

The NFU announced the result from the organisation’s annual meeting in Birmingham.

Ms Batters has been elected for a two-year term alongside Guy Smith as deputy president and Stuart Roberts as vice president.

She takes over the helm from outgoing president Meurig Raymond as farmers watch anxiously to see how agriculture will fare post-Brexit – particularly on the issues of trade, standards, labour and the future of farming subsidies.

The election followed the annual conference at which farming leaders urged the Government to ensure tariff-free trade with the European Union and that they will not be undercut by cheaper imports with lower environmental and welfare standards after the UK leaves the bloc.

Ms Batters said: ‘I am delighted to have been elected as President of the NFU and I am grateful to all the members who have given me the opportunity to lead our industry through Brexit and beyond.

‘At the heart of the NFU is its members and I would like the organisation to aim even higher on their behalf.

‘British farming is in the spotlight like never before and this is a great opportunity to reposition the sector in the eyes of the nation.

‘Together as a new officeholder team, we will hit the ground running and I look forward to sharing our new vision for farming at the earliest opportunity.’ 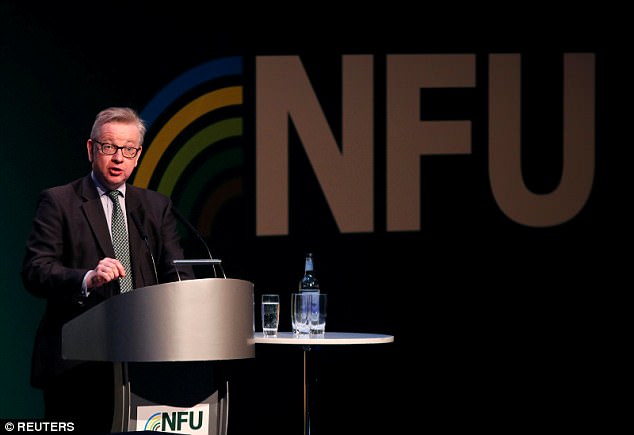 Ms Batters takes over the helm from outgoing president Meurig Raymond as farmers watch anxiously to see how agriculture will fare post-Brexit – particularly on the issues of trade, standards, labour and the future of farming subsidies. Michael Gove (pictured) is the Secretary of State for Environment, Food and Rural Affairs

Mr Smith said: ‘To serve as the deputy to Minette is a great honour.

‘Having worked with Minette for the past four years, I am looking forward to working with her and Stuart as a close team in what will be a pivotal two years for British agriculture.’

Ahead of her election, Ms Batters promised to increase the NFU’s membership and support farmers, work to support farming campaigners and build alliances that ‘reposition where food and farming sits in the eyes of the nation’.