The dazzling destinations you MUST visit in 2020 revealed by National Geographic, with ‘legend-filled’ Wales and ‘classic’ Philadelphia on the shortlist

Struggling to pick a location for your 2020 holiday?

Don’t fret, because the experts at National Geographic Traveler have served up a big dollop of inspiration – 25 dazzling destinations singled out as must-visit places for next year.

They form the publication’s Best Trips 2020 list, which is organised into four categories – culture, city, nature and adventure.

Making the cut this year is ‘legend-filled’ Wales, the ‘classic American’ city of Philadelphia and Mostar in the south of Bosnia and Herzegovina, which is celebrating 25 years of peace in 2020.

Also included is the ‘frozen world’ of the Magdalen Islands in Canada, El Hierro in the Canary Islands with its ‘lunar-like terrain’ and the Mexican city of Puebla, which ‘teems with ornate 17th and 18th-century buildings’.

Wales Way: This consists of three new, fully mapped national touring routes in Wales that National Geographic Traveler says ‘showcase the best of this legend-filled land’. It suggests following ‘far-reaching routes’ if you really want to ‘get the blood pumping’. Pictured is the Twr Mawr Lighthouse in Anglesey on the North Wales Way route 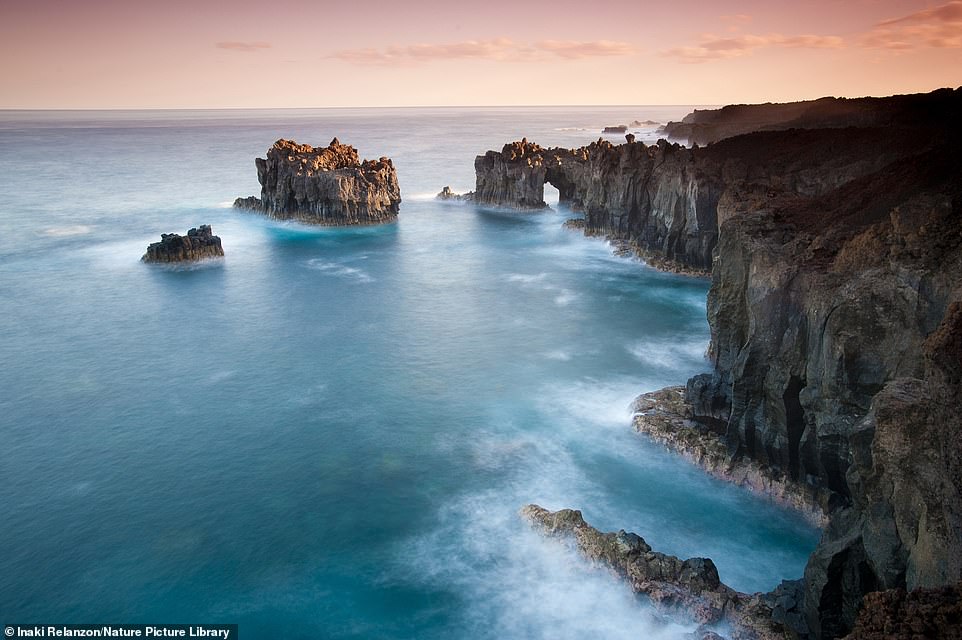 El Hierro, Canary Islands: This is the smallest of Spain’s Canary Islands, pictured, and is described as ‘a world apart from the rest of Spain’s main Canary Islands, which are more often famed for sun-and-sand resorts’. National Geographic Traveler explained: ‘Dramatic thrills extend to the astounding diversity of ecosystems, from lush meadows to rugged coastal cliffs and lunar-like terrain. Walking trails crisscross the island, some leading to spectacular Atlantic Ocean viewpoints’ 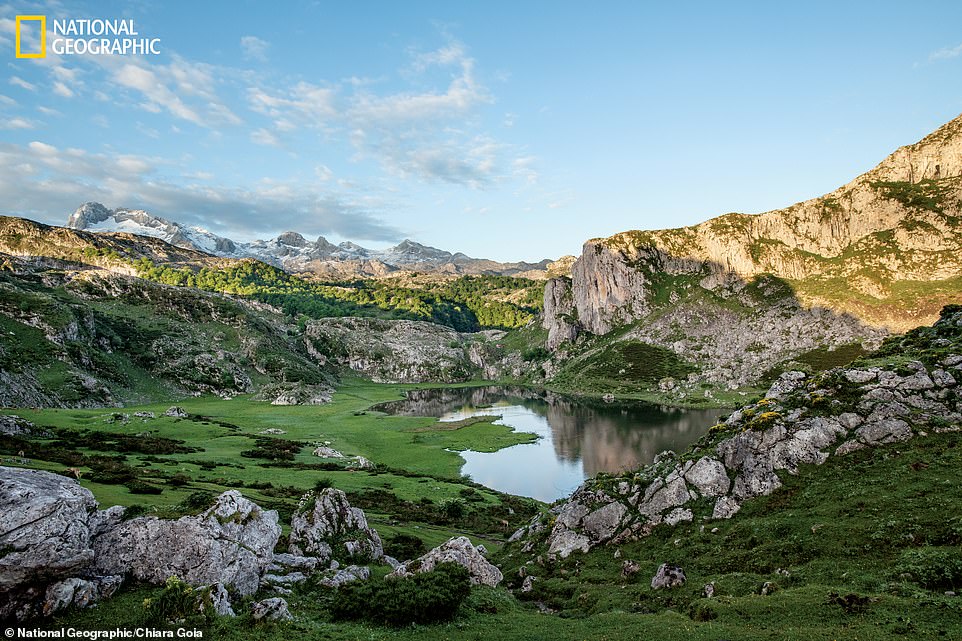 Asturias, Spain: This is an autonomous region of northern Spain that is ‘dense with trees that run up hillsides, dotted by wild marshland, and scalloped with tidy beaches’. The Asturian capital is Oviedo and the region is also home to Picos de Europa, Spain’s first national park. Pictured is Lago Ercina, one of two glacial lakes in Picos de Europa 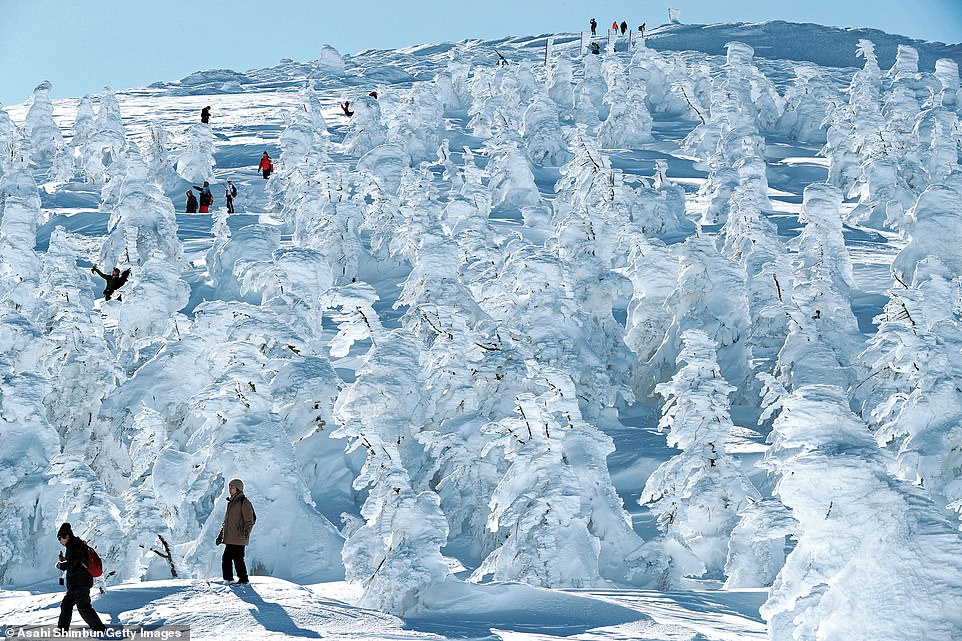 Tohoku, Japan: This region is known for its mountainous terrain and skiing options and as it is just three hours from Tokyo, National Geographic Traveler says it is the best place to ‘escape the Olympic crowds naturally’. It adds: ‘Comprising the six northernmost prefectures on Japan’s main island of Honshu, this region features pristine forests, gorges and crater lakes, thousand-year-old temples and shrines, and venerable local festivals’ 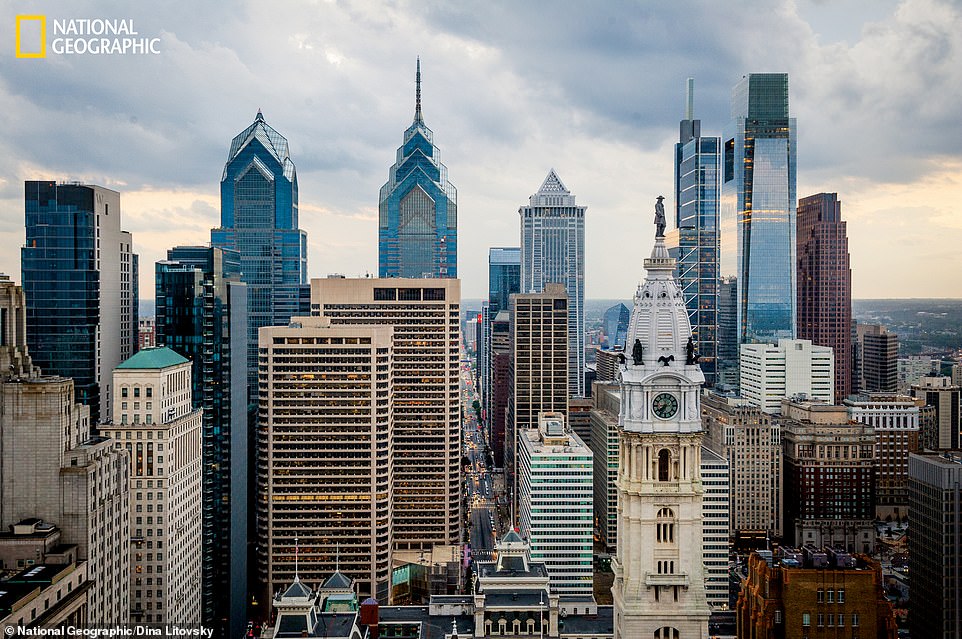 Philadelphia: National Geographic Traveler says 2020 is the perfect time to ‘rediscover an American classic’. It adds: ‘It’s a scrappy underdog with a heart of gold and — who can resist the Rocky reference? — the eye of the tiger. Slowly but steadily Philly has changed from a city of industrial might in the first half of the past century to a city of ingenious makers’ 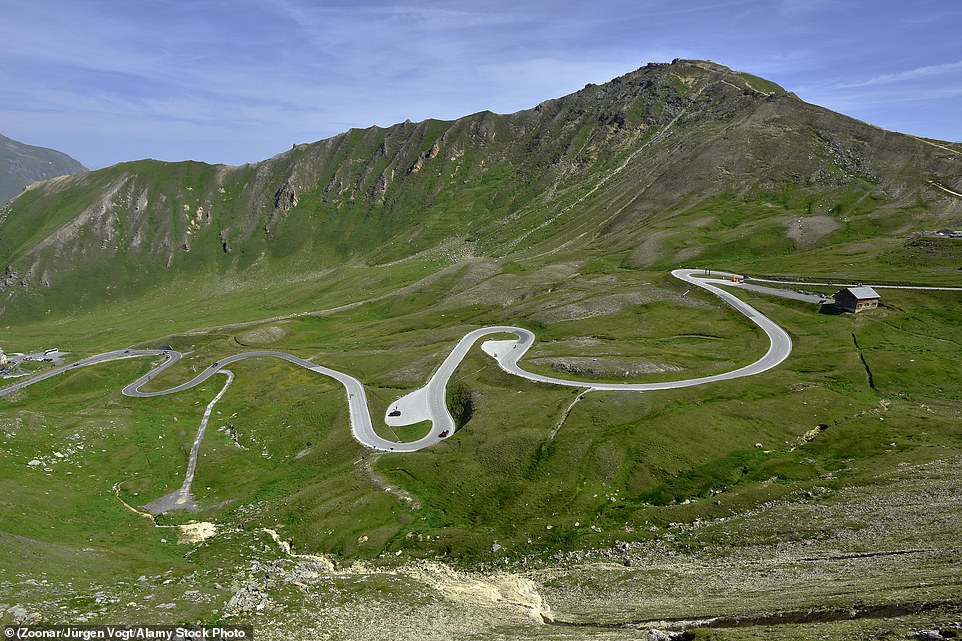 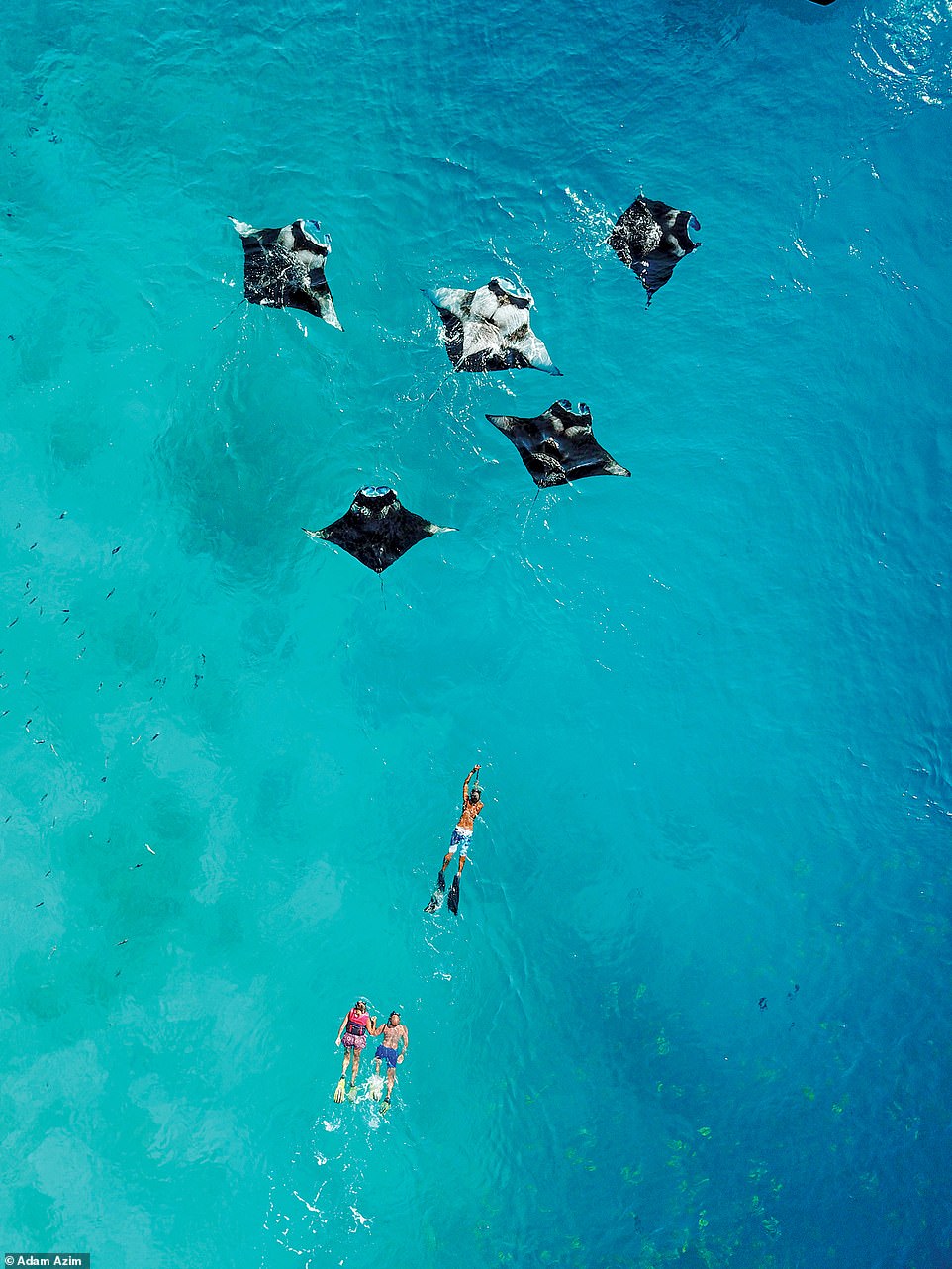 Maldives: National Geographic Traveler describes the archipelago as ‘forward-thinking islands on the front lines of climate change’. It adds: ‘The first nation to champion the need to address climate change in the United Nations General Assembly, in 1987, the Maldives is an environmental protection trailblazer.’ Pictured are reef mantas in the Maldives 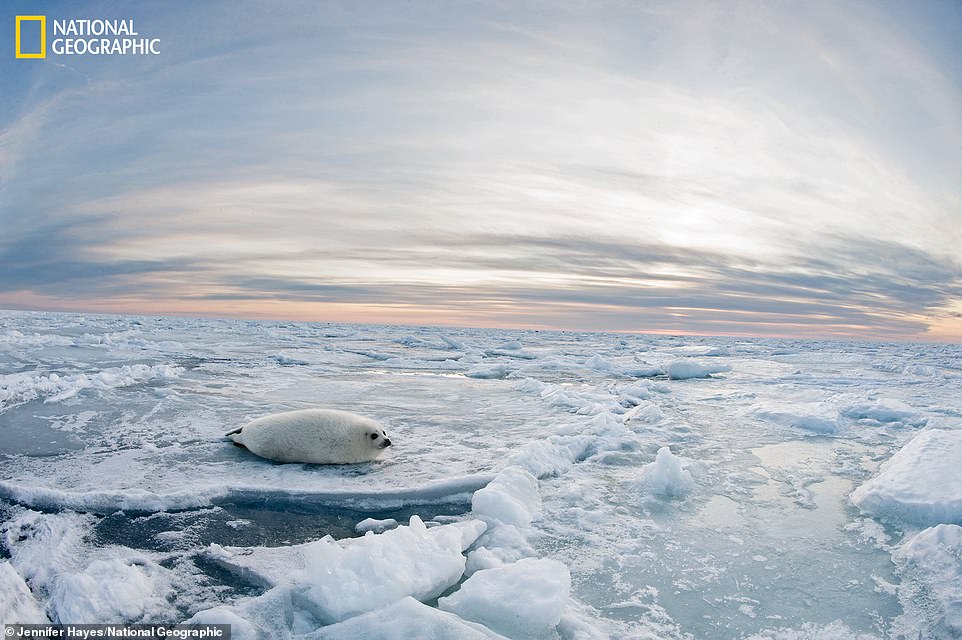 Magdalen Islands, Quebec, Canada: These islands lie in the Gulf of St Lawrence and are one of two Northwest Atlantic harp seal birthing grounds. National Geographic Traveler says: ‘This frozen world is stripped down to essentials: impossibly blue sky, bright sun bouncing off a blanket of fresh snow, wind that vibrates like a cello and whiteness all around’ 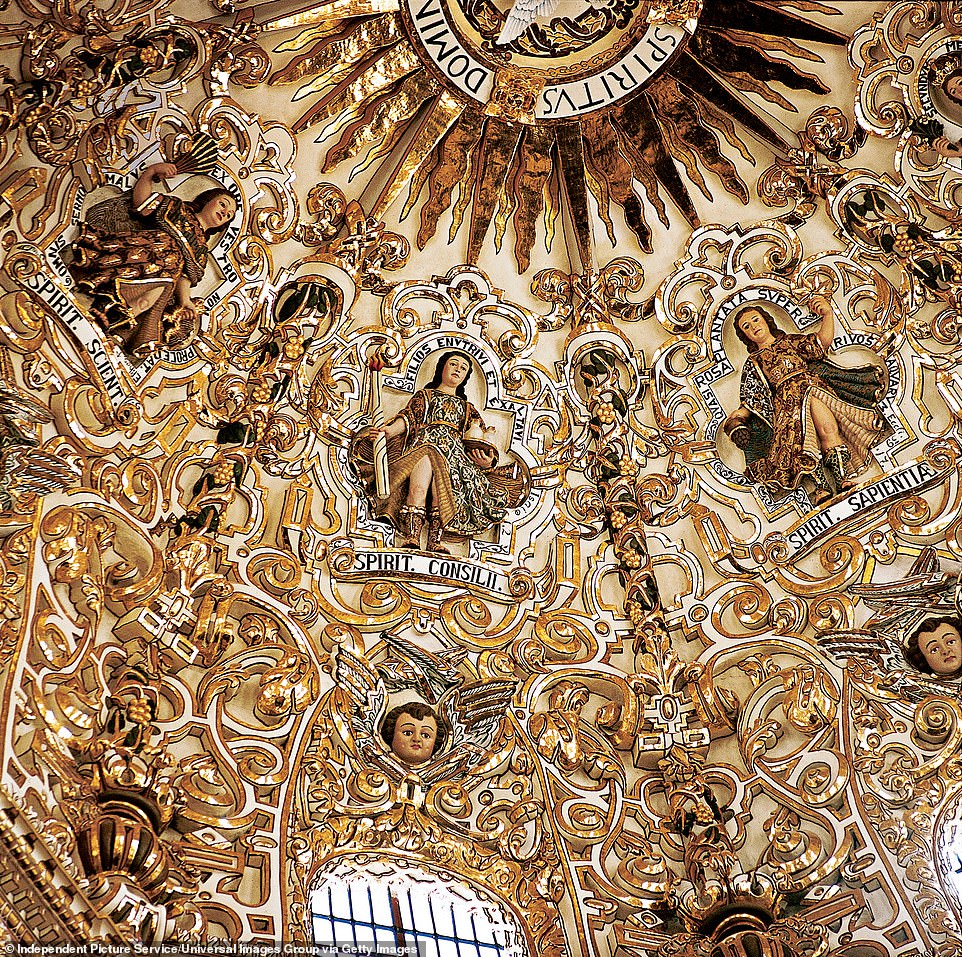 Puebla, Mexico: Built by the Spanish in 1531, Puebla is now the fourth-largest city in Mexico. The historic center of Puebla is a Unesco World Heritage Site and ‘teems with ornate 17th and 18th-century buildings’. Pictured is Puebla’s 17th-century Chapel of the Rosary, which is covered in 23-karat gold leaf 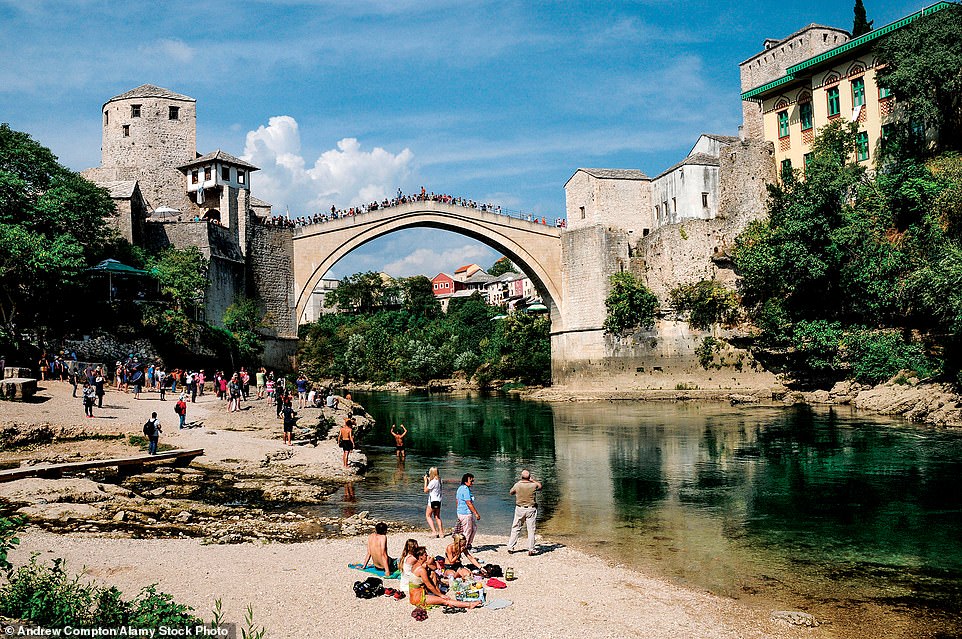 Mostar, Bosnia and Herzegovina: Mostar, a major city in the south of Bosnia and Herzegovina, was partially destroyed in the Bosnian War between 1992 and 1995. And National Geographic Traveler says next year is the best time to go as it marks 25 years of peace. It says: ‘Numerous buildings in the Old City, developed as a 15th-century Ottoman frontier town, have been rebuilt or restored in the 25 years since the Dayton Peace Accords established relative calm in the western Balkans. Wander around and you’ll pass newly renovated apartments next to buildings riddled with bullet holes.’ Pictured is a replica of the 16th-century Stari Most (Old Bridge) that spans the Neretva River in Mostar