A Native American man claims he was kicked out of a store where he was trying on clothes and then arrested because of his race.

Robert Robedeaux, from Oklahoma, was shopping at Hibbett Sports in Owasso where he was allegedly profiled after he asked an employee to take a photo of the outfit he tried on to send to his wife.

The store worker then called the police, leading three officers to escort the man off the premises for trespassing.

Robert Robedeaux filmed the moment he claims he was racially profiled at a Hibbett Sports store in Owasso, Oklahoma and posted it on Facebook on April 19, post pictured above 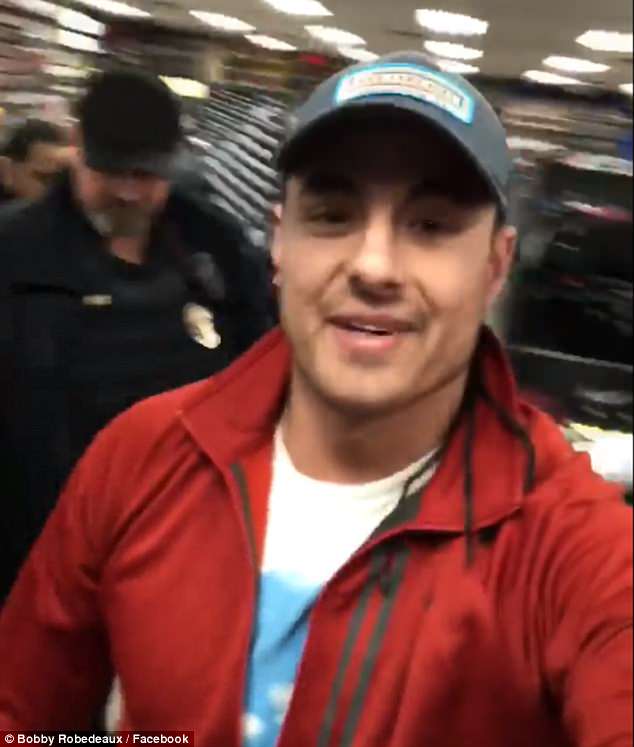 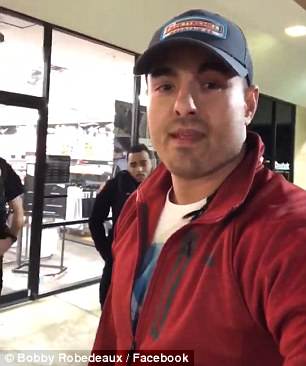 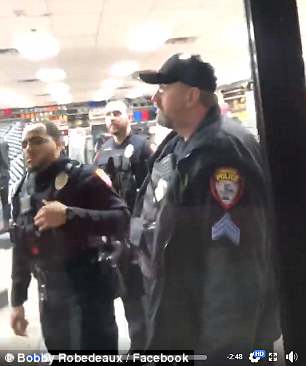 Outraged: He filmed as he was escorted out and said ‘All I did was try on clothes’

Infuriated, Robedeaux recorded himself in the store surrounded by the officers as he was escorted out saying ‘I didn’t do anything wrong’.

He posted the video on Facebook on Thursday April 19 where it has more than 18,000 views.

The incident took place on February 17.

Robedeaux said he’s sharing his video over a month later to demand justice, adding that he’s been calling the store ever since to complain about his treatment.

Robedeaux is a member of the Pawnee Nation and said he was judged on his appearance as his hair is braided the style of his tribe, according to Owasso Reporter.

’50 Shades of Profiling…. Please Share and Tag. If you know me, believe in my character, you know that I am about Love, Equality, and Respect for all of humanity.. I try to joke with everyone I cross paths with in hopes of catching a smile. I very rarely crossed paths with people who don’t end up becoming my #soulfamily .. I’ve had this video since February.. I’ve called steadily every week since. Because my heart was hurt, my spirit almost compromised by this…’ he wrote on Facebook.

‘I was trying on clothes at HIBBETT SPORTS, in Owasso Oklahoma, and the Mgr called the police on me. Why?! Because I was PROFILED as a threat, not because I was a threat, or being a threatening person, but because of my race and someone passed a judgement… As soon as I got out of the dressing room to buy the shoes, there were 3 cops waiting and asked me for my ID. I wasn’t doing anything suspicious, I even asked the store manager to take my picture so that I could send the picture to Sarah Robedeaux to see what she thought of my clothes. 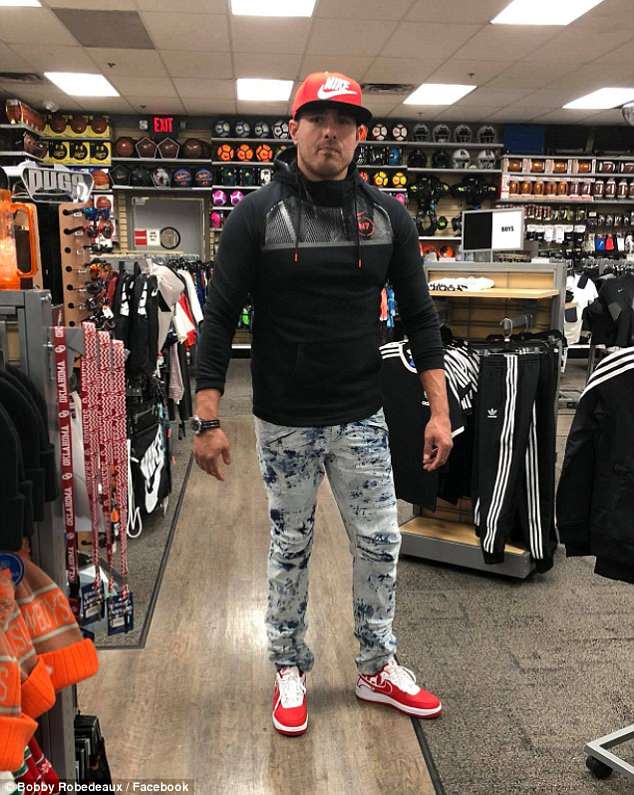 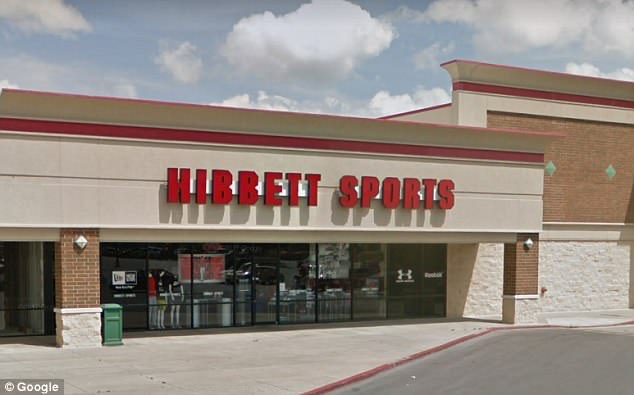 The store in Owasso, Oklahoma is yet to comment on the incident. The female employee who phoned the cops said that Robedeaux asked her if they were ‘all alone’

‘The manager has since changed her story multiple times as to why she called the cops. Please call and ask Hibbett yourself what happened, I attached their number! I have nothing to hide and there is no explanation for this violation! Keep in mind, profiling comes in many shades.. Not just black. #fiftyshadesofprofiling,’ he added.

A female employee at the store phoned police around 7:20 pm saying Robedeaux asked if ‘she was all alone’.

Feeling uncomfortable she asked for an officer to come to the store for a security check, according to the police report.

When Robedeaux exited the changing room he became ‘agitated’ seeing the officers, according to the Owasso Reporter.

After they told him they were conducting a security check, the Oklahoma man vehemently insisted that he had done nothing wrong.

In the video Robedeaux holds the camera and smiles as he shows the three officers ushering him out.

‘Look at this. One, two, three for doing nothing except trying on those clothes that I sent you a picture of to see what you thought. Three cops telling me to leave and asking me for my identification when I did nothing illegal. Three cops, asking me for my ID. I was trying on clothes and there are three officers right here walking me out because I tried on a set of clothes,’ he said.

An officer came out to explain that it is the business’ right to kick the man out for trespassing.

‘This is insane,’ he said as he gave his driver’s license up.

‘What did I do? I tried on clothes. I did not cause a scene,’ he added.

Then they ran his name for warrants.

‘Discrimination. I guess they didn’t think I had money to buy the clothes,’ he says to the camera.

Robedeaux was arrested for an outstanding warrant for a parking offense from December 2016. He was later released on bond.

Owasso Police Deputy Chief Jason Woodruff said that such security checks as the above incident are common.

‘Officers routinely stop by businesses, especially after dark, to check on employees’ wellbeing. When resources allow, they are encouraged to patrol in high retail theft areas as a deterrent to potential lawbreakers,’ he said.

Robedeaux’s lawyer is comparing his client’s incident to the infamous arrest of two black men in a Philadelphia Starbucks after a white employee called the police accusing the pair of trespassing.

‘It’s very similar to the Starbucks matter where you have an employee that’s just stereotypically calling the police to remove a patron that she doesn’t want there – a patron of color, and his hair was in the tradition native American style of his tribe,’ his lawyer Brett Chapman said to the Owasso Reporter. 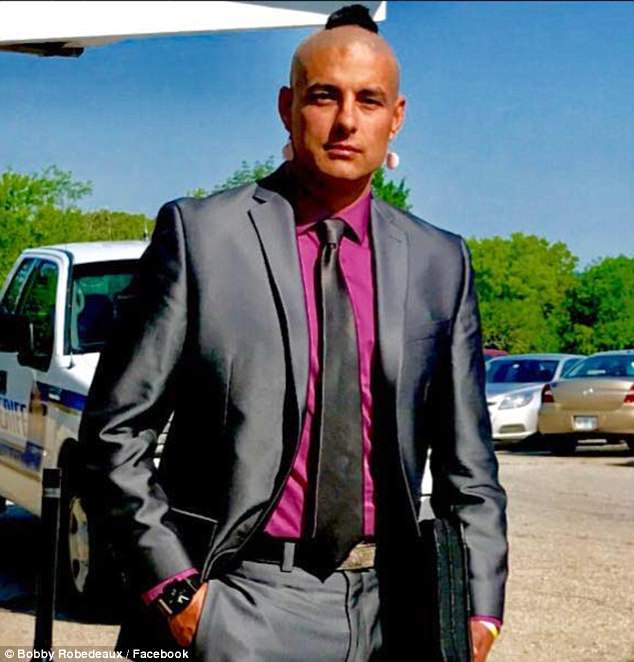 Robedeaux, who is a member of Pawnee Nation in Owasso, Oklahoma, believes he was judged for his native hair style 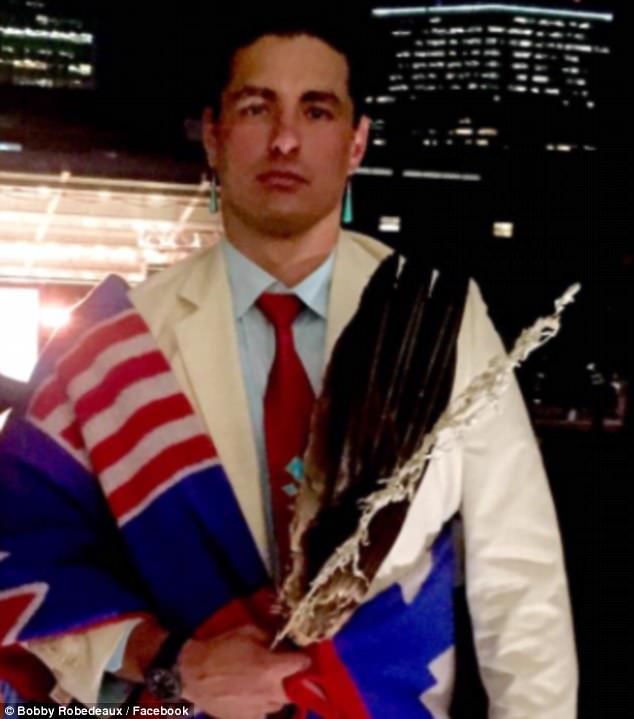 On Facebook he wrote: ‘I was PROFILED as a threat, not because I was a threat, or being a threatening person, but because of my race and someone passed a judgement’ 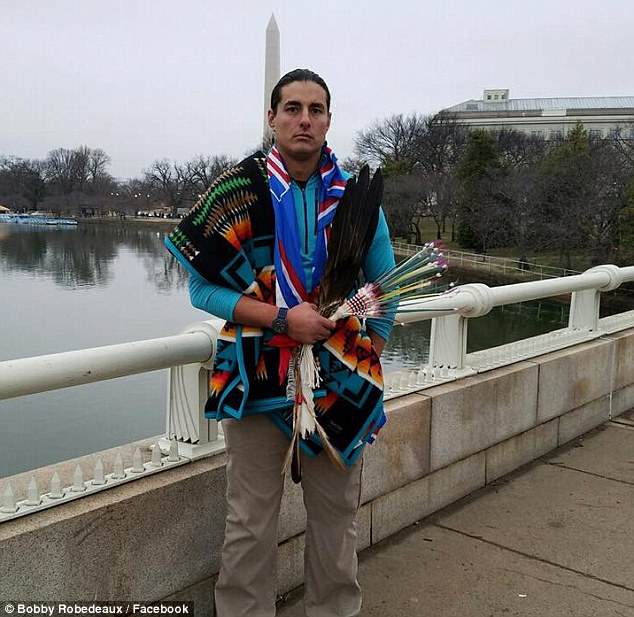 He claimed that Robedeaux never asked the employee if she was ‘all alone’. Instead he asked her to take a picture of him in the outfit he was trying on, to send to his wife.

‘That’s not the actions consistent with somebody that’s creepy going in there asking those kind of things. This allegation that he made this statement… I don’t know where that comes from because… the report that I have from the officers there does not mention that,’ he said.

Chapman did not elaborate on how his client’s incident was a racially-motivated incident.

‘Any patron that’s going there to try on clothes, under those circumstances, feels that way when you walk out and cops are there. There’s no rhyme or reason for it … he intricately knew, and that’s why he gets his phone out,’ he said.

Robedeaux’s wife says he was profiled based on his hairstyle.

‘Racial Profiling comes in many shades. This incident occurred at Hibbett Sports in Owasso, Ok. My husband was asked to leave for the mere fact that he was Native and had long, braided hair in the traditional Pawnee style!’ Sara Robedeaux wrote on Twitter.

Hibbett Sports is yet to comment on the incident and has not responded to Dailymail.com’s request for comment.

Regional vice president of Hibbett Sports David Kuensel said he was not at liberty to comment on the incident when approached by the Owasso Reporter.

However the athletics company fired its area district manager Jason Lock after the video went viral.

It is not clear why he was fired as he was not present during the February incident.

‘The conversation revolved loosely around the video escalating and not letting this (grow) into another Starbucks incident. My feelings are that Hibbett Sports handled this situation very poorly. After 15 years of dedicated service to them, I feel they sacrificed me to avoid a PR nightmare,’ he said.