Nature: Chlamydia vaccine is being trialled in koalas in Australia

Chlamydia vaccine is being trialled in koalas in Australia, as research reveals the STI affects more than 50 per cent of the population in some areas

Hundreds of koalas in Australia are due to be vaccinated against chlamydia, an infection which for the marsupials can lead to blindness, infertility and even death.

Experts have reported that in some areas — including South East Queensland and New South Wales — the disease affects more than 50 percent of koala populations.

However, researchers led from the University of the Sunshine Coast (USC) hope that their vaccination program will play a key role in the long-term survival of the animals.

Like humans, koalas can catch chlamydia via sexual intercourse, but the infection can also be passed from mothers to their young via pap, a type of nutritional faeces.

Hundreds of koalas in Australia are due to be vaccinated against chlamydia , an infection which for the marsupials can lead to blindness, infertility and even death. Pictured: a koala

WHAT IS PUTTING KOALAS AT RISK OF EXTINCTION?

Koala populations along Australia’s east coast have been declining due to a culmination of various factors.

Habitat loss from deforestation, diseases such as chlamydia, attacks from predators, fire and road collisions are all contributing to their decline.

It was previously thought they only got hydration from leaves but a revolutionary new study has found they are actually able, and willing, to drink from standing water.

Koalas can’t simply eat more leaves to compensate for reduced water content in their favourite food because they are limited by how much they can devour by leaf toxins.

They are listed as ‘vulnerable’ on the IUCN Red list which tracks at-risk animals.

‘The vaccine has now passed Phase 1 and Phase 2 testing that has established that it is completely safe and produces a good immune response and a good level of protection,’ said USC microbiologist Peter Timms.

‘The vaccine has been evaluated in more than 200 koalas in eight smaller trials so far, both in captive and wild koalas entering wildlife hospitals and in koala populations in the wild.

‘We are now at the exciting stage of being ready to roll out the vaccine as part of large Phase 3 trials,’ he added.

One venue for the vaccinations beginning today is the Australia Zoo Wildlife Hospital in Beerwah, Queensland, where some 400 koalas are scheduled to be treated. The hospital has been involved in the vaccine’s development for some years.

Koalas, Professor Timms explained, will receive the single-dose injection after undergoing routine hospital care but before they are released back into the wild.

‘While this vaccination will directly benefit each of the animals, the trial will also have a focus on the protection provided by vaccination,’ he said.

‘All koalas will be microchipped and the hospital will record any animals that return for any reason over the following 12 months.’

Other trials in Queensland are being planned at the Moggill Koala Rehabilitation Centre and the RSPCA Wildlife Hospital in Wacol — as well as in several wild koala populations, including those in the Moreton Bay area.

According to Australia Zoo Wildlife Hospital Wildlife veterinarian Amber Gillett, chlamydia represents one of the most significant threats to koala populations — and one of the most common reasons the animals are admitted to the facility.

‘It is a cruel disease that causes debilitating conjunctivitis, bladder infections and at times, infertility,’ she explained.

‘Although many koalas with chlamydia can be treated using traditional antibiotics, some animals cannot be saved due to the severity of their infection.’

‘Having a vaccine that can help prevent both infection and the severity of the disease is a critical element in the species’ conservation management.’ 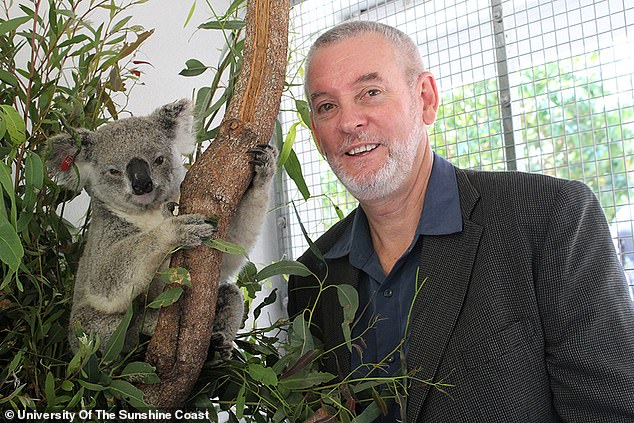 ‘The vaccine has now passed Phase 1 and Phase 2 testing that has established that it is completely safe and produces a good immune response and a good level of protection,’ said USC microbiologist Peter Timms, pictured here with a koala

Professor Timms added that — in parallel with the rollout of the trails — the vaccine is also progressing through an official registration process with the Australian Pesticides and Veterinary Medicines Authority (APVMA).

However, he added, the procedure is long, complex, highly regulated and expensive.

‘The vaccine team based at USC is already well advanced with this stage, including a pre-application with the APVMA, conversion of the research vaccine into a highly quality-controlled version and partnering with a vaccine manufacturer,’ he said.

‘Efforts are also now focussed on raising the funds to support this critical stage.’

More information on the effort — including on how to donate to the vaccination programme — can be found on the USC website.

WHAT IS CHLAMYDIA AND WHAT ARE THE SYMPTOMS?

Chlamydia is a sexually-transmitted disease.

Other animal species can suffer from chlamydia, with koalas the common example.

Some populations of koala in Australia have been devastated by the disease, with reports of up to 100 per cent infection.

What are the symptoms in humans?

The majority of people do not feel symptoms of chlamydia. Doctors recommend getting regular STD tests (urine test or swab) to detect it.

However, some do experience some side effects.

The infection is easily treated with antibiotics.