Underwater scenes viewed through an immersive VR headset were the most effective at boosting positive feelings and happiness, meanwhile.

Experiencing nature in VR could have even larger benefits than simply watching on TV, such as boosting positive feelings and increasing people’s connection to the natural world.

The new study could have important implications for populations facing extended periods at home, including lockdowns as part of a second wave of Covid-19 infections.

A still from Blue Planet II, which participants watched on TV. The show minimised negative feelings such as sadness, as well as significantly reducing boredom, but scenes were even more effective when viewed through a VR headset

‘Our results show that simply watching nature on TV can help to lift people’s mood and combat boredom,’ said study author Nicky Yeo at the University of Exeter.

‘With people around the world facing limited access to outdoor environments because of Covid-19 quarantines, this study suggests that nature programmes might offer an accessible way for populations to benefit from a dose of digital nature.’

Under laboratory conditions, researchers induced feelings of boredom in 96 participants by asking them to watch a video in which a person describes their work at an office supply company.

All three conditions were designed to present participants with a ‘dynamic underwater scene’ complete with colourful fish, corals and a turtle. 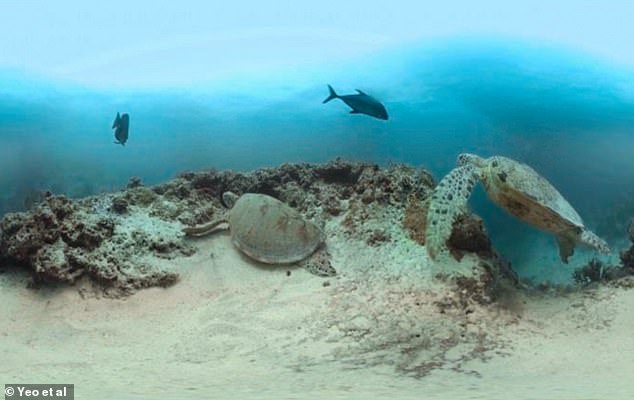 Aquaria and tropical fish are good at promoting positive emotions and are regularly used in a range of health-care settings and retirement homes, previous research has found.

The first two conditions used footage from the BBC Blue Planet II series, some of which has never been publicly broadcast.

This programme places the participant on an underwater ledge among corals, anemones and small colourful reef fish.

Also in the third condition, the participants interacted with the virtual computer-generated fish and corals using HTC Vive handheld controllers, to bolster feelings of immersion along with the headset. 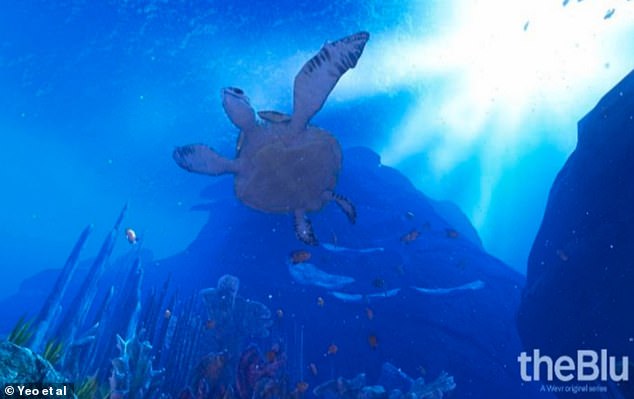 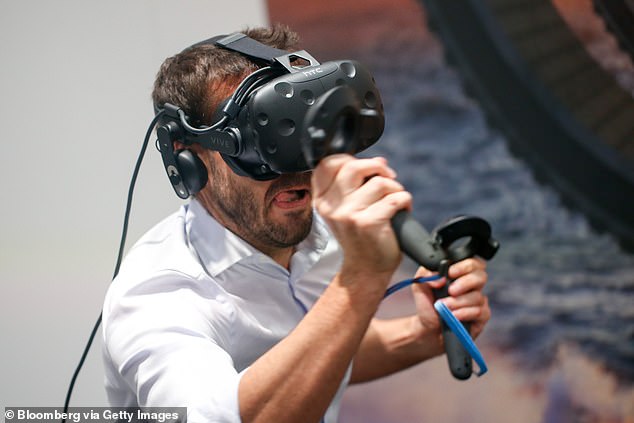 A man wearing a Vive VR headset, manufactured by HTC. Interactive VR experiences that use the controllers as well as the headset increases positive feelings, the study suggests

The researchers found that all viewing methods minimised negative feelings such as sadness, as well as significantly reducing boredom.

However, only the third ‘interactive’ VR experience led to increases in positive feelings, such as happiness, and strengthened how connected people felt to nature.

The findings support initiatives seeking to bring the therapeutic potential of nature to people at home, such as BBC Four’s recent Mindful Escapes series.

‘Virtual reality could help us to boost the wellbeing of people who can’t readily access the natural world, such as those in hospital or in long-term care.

‘But it might also help to encourage a deeper connection to nature in healthy populations, a mechanism which can foster more pro-environmental behaviours and prompt people to protect and preserve nature in the real world.’

The study has been published in the Journal of Environmental Psychology.

Virtual reality is the term used to describe A three-dimensional, computer generated environment which can be explored and interacted with by a person.

That person becomes part of this virtual world or is immersed within this environment and whilst there, is able to manipulate objects or perform a series of actions.

How is virtual reality achieved?

Virtual reality is usually implemented using computer technology. There are a range of systems that are used for this purpose, such as headsets, omni-directional treadmills and special gloves.

These are used to actually stimulate our senses together in order to create the illusion of reality.