King Kongs get along: Gorillas are good neighbours and welcome long lost friends — as long as they don’t invade their ‘core’ territory

Mountain gorillas will gladly greet other groups of the great apes and welcome long-lost friends — providing they don’t encroach on their core territory, a study found.

Researchers from Exeter tracked the movement and interactions of groups of mountain gorillas in Rwanda over a 16-year-period.

They found that gorillas would would welcome familiar groups — even if they hadn’t seen them for a decade — as long as they stayed on the outskirts of their territory.

Gorillas only reacted with real aggression if they did not recognise another group — or if a familiar group strayed too far into their habitat.

Humans have an unrivalled capacity for cooperation based on wide friendships — a tendency experts think evolved to allow shared access to space and resources.

The findings of the new study suggest that the same applies to gorillas, who benefit from maintaining friendships beyond their close circle.

Mountain gorillas will gladly greet other groups of the great apes and welcome long-lost friends — providing they don’t encroach on their core territory, a study found

Mountain gorillas — which spend most of their time in tight-knit communities, foraging, resting and sleeping — divide their territory between a core ‘home range’ and a wider ‘peripheral range’

Groups can sometimes split up, however — and closely related gorillas which may have lived together for years can end up separated and in different groups.

‘Meetings of groups are fairly rare, and at first both groups are usually cautious,’ said paper author and gorilla expert Robin Morrison of the University of Exeter.

‘They often beat their chests and show off their strength, but the interaction can then either become aggressive, with fighting and screaming — or “affiliative”.’

‘They may rest together, and younger gorillas will often play with youngsters from the other group.’

In their study, Dr Morrison and colleagues analysed the movement and interactions of 17 mountain gorilla groups in Rwanda’s Volcanoes National Park over 16 years.

Gorillas were four times more likely to be friendly if they were familiar with the intruding individuals — even if they had not seen each other for more than ten years, the researchers found.

They only became aggressive if the familiar group strayed into their core territory, but were happy to share the periphery. 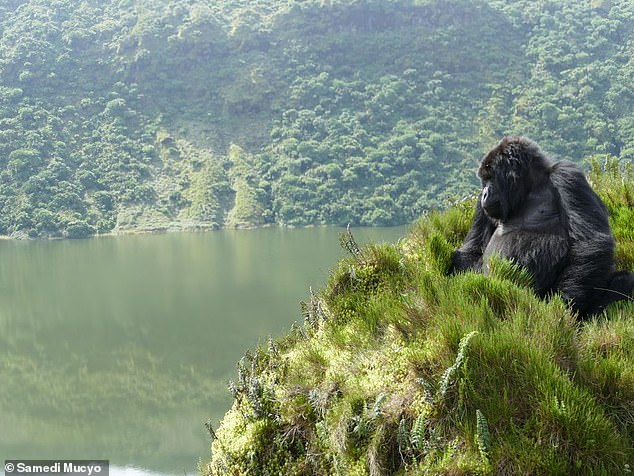 In their study, Dr Morrison and colleagues analysed the movement and interactions of 17 mountain gorilla groups in Rwanda’s Volcanoes National Park over 16 years

‘The pattern we found mirrors what we see in humans,’ said Dr Morrison.

‘We also have concepts of public spaces outside our “range” where we tolerate anyone — spaces like our homes where we tolerate certain individuals and private spaces within those homes reserved for close family or just ourselves.’

In the periphery, heightened aggression was only shown towards less familiar gorilla groups, the researchers found.

A better understanding of these behavioural patterns could aid conservation efforts to preserve the endangered apes.

‘As a result of extreme conservation efforts, the population has been growing over the last 30 years, while their habitat has not.’

‘Understanding how groups interact and share their limited space is important for estimating future population dynamics and trends in this endangered species.’

The full findings of the study were published in the journal Animal Ecology. 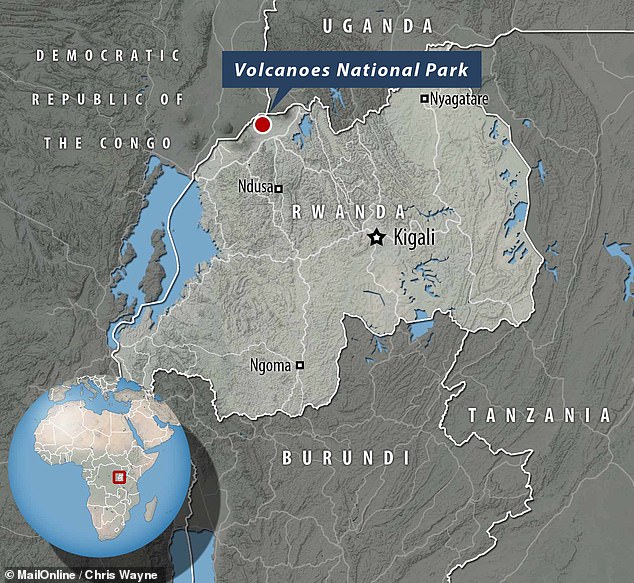 In their study, Dr Morrison and colleagues analysed the movement and interactions of 17 mountain gorilla groups in Rwanda’s Volcanoes National Park over 16 years