Nazanin Zaghari-Ratcliffe’s husband has pleaded with Boris Johnson to deliver a ‘Christmas miracle’ and get his wife freed from prison in Iran and revealed their five-year-old daughter ‘cries for her mummy.’

Richard Ratcliffe wrote a letter to the PM two weeks ago about his wife – who has been held by Tehran since 2016 after false accusations she was working as a spy – but is yet to receive a response.

In his letter he asked Mr Johnson for a ‘Christmas miracle,’ and to get his wife out of the notorious Evin prison in which she currently resides.

After not getting a response, Mr Ratcliffe feels his only option is to go public and demand Mr Johnson keep the promise he made when he was Foreign Secretary to ‘leave no stone unturned’ to free the British mother, as reported by The Daily Mirror.

Richard Ratcliffe, husband of British-Iranian aid worker Nazanin Zaghari-Ratcliffe jailed in Tehran since 2016, holds his daughter Gabriella during a news conference in London, in October this year

In one particular instance, Mr Johnson was forced to apologise in 2017 after wrongly claiming she had been arrested during a trip to train journalists.

Mr Ratcliffe believes this error proved costly for his wife and ‘cemented’ her imprisonment. He also revealed his five-year-old daughter Gabriella ‘cries for her mummy.’

He said: ‘Enough is enough. How can this be allowed to happen without the PM explaining what he is doing about it?

‘If he is not taking responsibility here then heaven help us elsewhere.’

In the letter Mr Ratcliffe goes into detail about the desperation his wife is feeling, and  that she has considered an overdose. 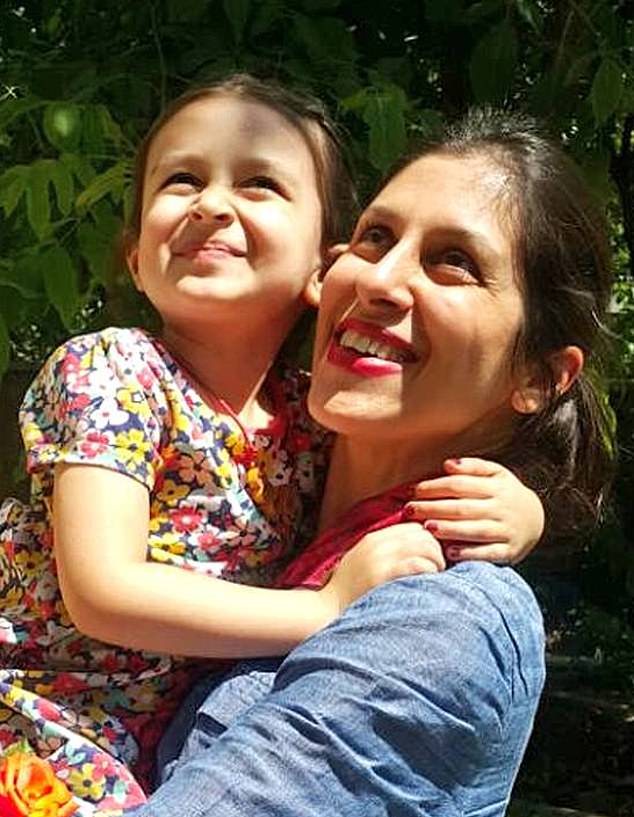 Gabriella Zaghari-Ratcliffe, five, (pictured with her mother) often cries for her mother, Mr Ratcliffe has revealed

He says: ‘Does she have to attempt something extreme before your pro­­mise is kept?’

The British-Iranian mother-of-one is serving a five-year sentence but there are concerns she is being used as a bargaining chip in a decades-old row over a £400 million arms debt owed by the British Government.

The debt has not been paid, and in the letter Mr Ratcliffe says this has created dire consequences for his wife and other people imprisoned in Iran.

He added:  ‘There are people in prison now who would not be there if you had not made such promises and failed to keep them.’

He tells Johnson: ‘She says how she no longer wants to live through what they are doing to her.’

A Tory spokesman told the Daily Mirror: ‘We continue to raise cases at the most senior level and urge Iran to let them be reunited.’