Nazanin Zaghari-Ratcliffe has had her visiting hours cut and can now only see her daughter Gabriella, pictured together, once a month

The British mother jailed in Iran on false spying charges feels she could ‘suffocate’ after her visiting hours were cut.

Nazanin Zaghari-Ratcliffe, the British-Iranian charity worker, is now only able to see her five-year-old daughter, Gabriella, once a month.

She was previously allowed to see her twice a week in what her husband called a ‘lifeline’.

Mrs Zaghari-Ratcliffe, 40, is also barred from making international calls, leaving her unable to speak to her husband Richard, who is in the UK.

Gabriella is living with her grandparents in Iran and the campaign group Free Nazanin said Mrs Zaghari-Ratcliffe told her family the restrictions are ‘cruel’ and ‘unjust’.

Nazanin said: ‘I am so upset. I feel like I could suffocate. I can’t even think what to do. I haven’t cried so loud for ages.’

Mr Ratcliffe criticised Boris Johnson for not meeting the family since entering Downing Street, and said he has not been invited to meet Dominic Raab, the new Foreign Secretary.

He said: ‘We understand where we fit in the pecking order. It feels like we are in holding pattern because other issues are more important.’ Mrs Zaghari-Ratcliffe, 40, pictured, was sentenced in 2016 after being convicted of spying in Iran. Her husband said ‘to play games like this just has a really negative effect’

Nazanin has written to prison authorities to protest the change in her conditions which came about when a new head of the prison was appointed.

Mr Ratcliffe warned this his wife, who was sentenced in 2016 after being convicted of spying, was coping with ‘tremendous suffering’ and ‘won’t go on much longer’.

He told Sky News: ‘She’s really desperate. She’s really on her last legs. To play games like this just has a really negative effect.’

He said their daughter’s visits were ‘really quite a lifeline to be able to see each other and feel human still’.

While campaigning for the Conservative leadership, Mr Johnson said he felt ‘a deep sense of anguish’ over Mrs Zaghari-Ratcliffe’s case.

The PM was accused of helping to keep her in jail during his tenure as Foreign Secretary because he incorrectly said she was teaching journalism in Iran. 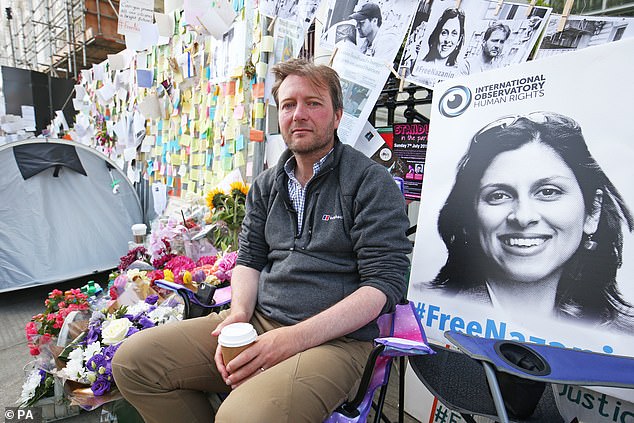 Mr Ratcliffe, pictured outside the Iranian embassy in London in June, criticised Boris Johnson for not meeting the family since entering Downing Street

His comments were seized upon by Iranian prosecutors who brought them up in court as evidence against the charity worker.

It emerged last month she had been chained to a bed in a Tehran psychiatric ward after she went on hunger strike for 15 days in protest at her imprisonment.

She was eventually returned to Evin prison, where she is being held alongside Aras Amiri, an Iranian woman who worked at the British council.

Ms Amiri was arrested last year and has been sentenced to 10 years in prison on spying charges. She strongly denies the allegations.