Jayson Tatum had 51 points, including seven triples, and the Boston Celtics beat the Charlotte Hornets for the second time in three days, 130-118 for their seventh straight victory.

Derrick White added 19 points and eight assists and Malcolm Brogdon scored 16 on Monday for the Celtics, who improved to 33-12 on the season — maintaining the best record in the Eastern Conference.

‘He makes me look like a better coach,’ Celtics coach Joe Mazzulla said. 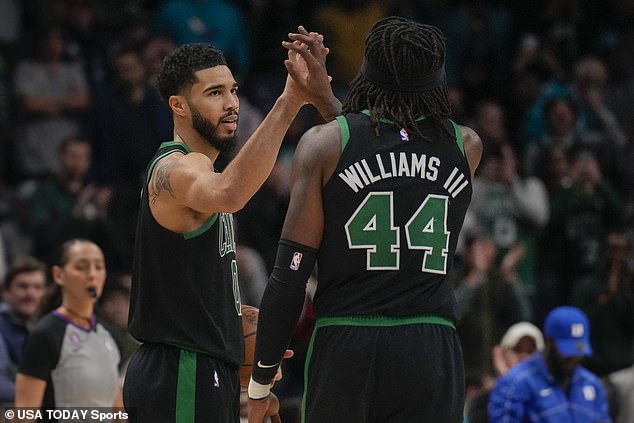 Jalen McDaniels led the Hornets with a career-high 26 points on 5-of-7 shooting from three-point range. LaMelo Ball finished with 25 points on 8-of-23 shooting. Mason Plumlee had perhaps his best all-around game of the season, with 19 points, 12 rebounds and seven assists for the Hornets (11-34), who’ve lost eight of their last nine games.

Charlotte cut the lead to 100-98 early in the fourth quarter, but White was fouled by Dennis Smith Jr. on a three-point attempt and made all three free throws.

Tatum took over in the final period with 17 points.

He drilled a step-back three from the top of the key to push the lead to 10 and put away the game with a long triple with 1:02 left. Then, at the crowd’s urging for him to get to 50 points, Tatum canned a three from left wing with 38 seconds left and the crowd erupted into chants of ‘MVP! MVP!’

‘I hear them and just being in North Carolina, it all feels a little more special, having gone to school two hours away,’ Tatum, who spent one season at Duke before entering the NBA draft, said.

‘Coming here feels like I’m back home a little bit.’ 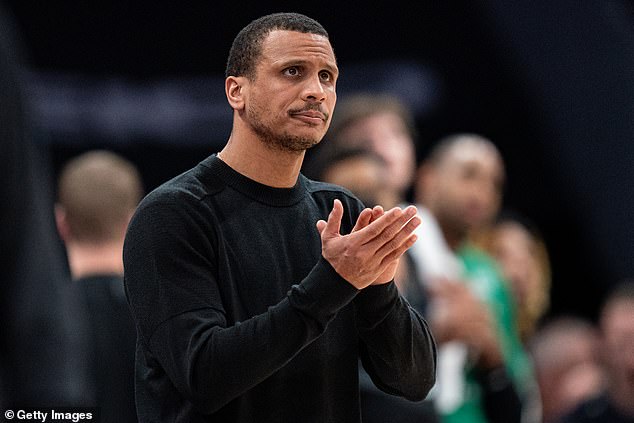 Steph Curry scored 41 points and Jordan Poole added 32 points to help the wobbling Golden State Warriors to a 127-118 win over the Washington Wizards on Monday.

Golden State had lost four of five coming into the game. Draymond Green had 17 points, 10 assists and six rebounds.

Kristaps Porzingis led Washington with 32 points. Kyle Kuzma added 16 points, 11 rebounds and five assists, but struggled from the field, where he was only 5 for 20. 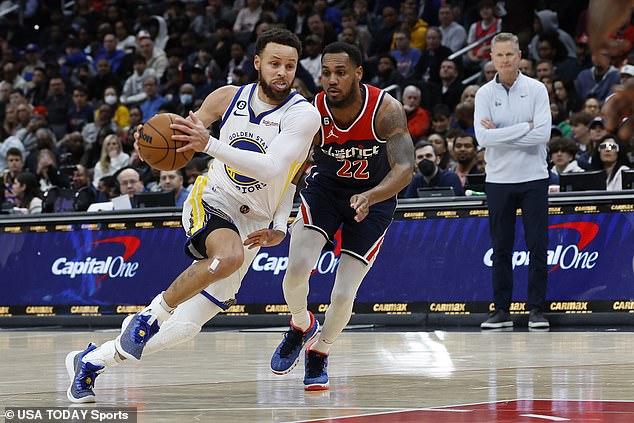 The Wizards reached their biggest lead of the night 89-80, following a Deni Avdija layup with 4:33 to play in the third quarter. But the Warriors quickly closed back to within two points at 93-91 on a Curry 3-pointer, then tied the game on an Anthony Lamb layup. Neither team maintained a lead for more than a spurt through the first three quarters, which had 12 ties, 12 lead changes, and finished tied, 93-93.

Washington led by six at one point, Golden State by seven, before the first half ended with the Warriors ahead, 69-64. 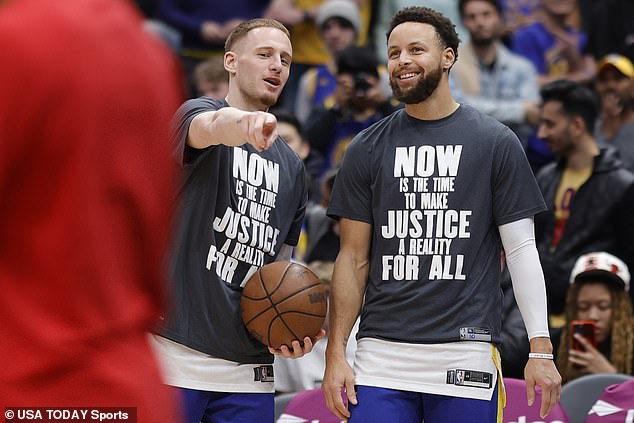 Before the game, the players honored Martin Luther King Day at the Capital One Arena

Fred VanVleet scored 33 points, Scottie Barnes had 26 points and the Toronto Raptors recovered in overtime after RJ Barrett’s tying slam with 0.6 seconds left in regulation to beat the New York Knicks 123-121 on Monday.

Pascal Siakam had 20 points, nine assists and eight rebounds for the Raptors, but he was on the bench after fouling out when Toronto had to wait out Jalen Brunson’s missed 3-pointer in the final second before emerging with the victory.

O.G. Anunoby hit two 3-pointers in overtime as Toronto built a six-point lead, but New York nearly erased that in the final minute.

Barrett, who is from Toronto, scored 32 points and Brunson had 26 for the Knicks, who had their three-game winning streak snapped. Julius Randle finished with 21 points, 15 rebounds and eight assists. 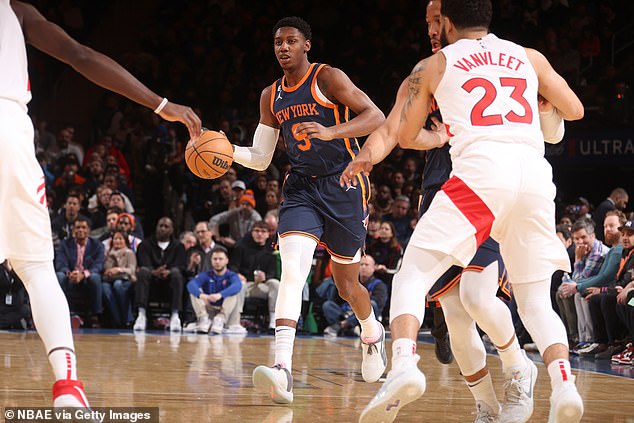 RJ Barrett tied the game with a slam with 0.6 seconds left but the Knicks lost in overtime

Barnes hit two free throws for a 109-108 lead with 12 seconds left, but when he hit only one with 6.6 seconds to go, Barrett went all the way up the middle of the floor and no Raptors stepped in to stop him before his dunk made it 110-all.

Anunoby hit a couple 3s early in the extra period before Siakam, who scored a career-high 52 points in Toronto’s victory here last month, converted a three-point play that made it 121-115 with 1:23 remaining.

Jrue Holiday scored 35 points and dished out 11 assists, Bobby Portis went for 21 points and 11 rebounds and the Milwaukee Bucks rallied from an 11-point halftime deficit to beat the visiting Indiana Pacers 132-119 on Monday.

The Bucks, playing without two-time MVP and 31-point-per-game scorer Giannis Antetokounmpo for a third consecutive game due to knee soreness, used a dominant fourth quarter to avoid a three-game losing streak.

Milwaukee outscored Indiana 39-21 in the final period thanks to a 14-of-18 shooting effort over the final 12 minutes.

Holiday scored 11 points of his game-high total in the fourth quarter, while Grayson Allen knocked down a pair of 3-pointers early in the period en route to eight of his 17 points during the stanza. 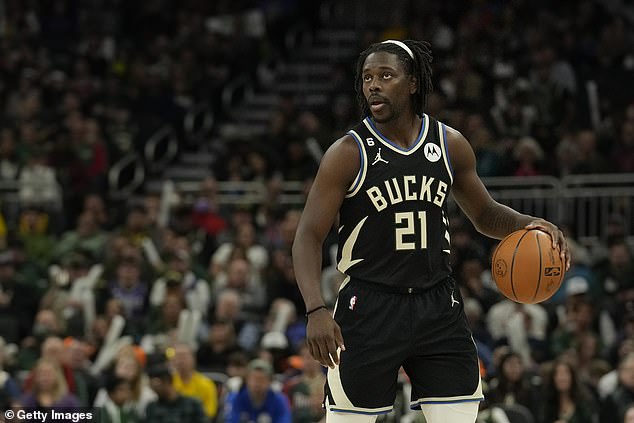 Allen’s performance, which also included five rebounds, four assists and two steals, was part of an all-around balanced effort for Milwaukee. Five Bucks scored in double figures, with Brook Lopez adding 19 points and Jordan Nwora coming off the bench to shoot 4 of 4 from 3-point range and finish with 14 points.

George Hill returned for his first appearance since Jan. 6 and shot 4-for-6 from the floor for nine points. Hill also distributed six assists, with 32 of Milwaukee’s 48 made field goals coming off assists.

The Bucks shot 48 of 91 from the field overall, including 23 of 46 from beyond the arc. Holiday, who went 5-for-8 from deep, led seven Milwaukee shooters connecting on at least two treys. Allen, Lopez and Portis each made three 3-point attempts.

Myles Turner returned to the lineup after a three-game hiatus due to back issues and scored a team-high 30 points. He also matched Bennedict Mathurin’s team high with eight rebounds and blocked a game-high four shots.

T.J. McConnell came off the bench to score a career-high 29 points on 11-of-16 shooting from the floor while going 4-for-4 from 3-point range. Buddy Hield shot 5 of 10 from deep en route to 18 points. 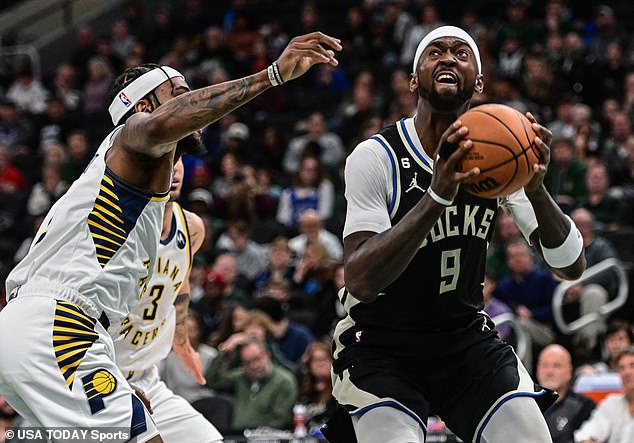 Darius Garland scored 30 points, Jarrett Allen added 24 and the Cleveland Cavaliers rallied in the fourth quarter with star Donovan Mitchell injured on the bench to beat the road-weary New Orleans Pelicans 113-103 on Monday.

Mitchell scored 11 points in 22 minutes before sitting out the fourth with a strained left groin.

The Cavs were down 81-78 entering the final 12 minutes before Garland made a 3-pointer and fed Allen for a dunk as Cleveland blitzed New Orleans 16-2 to start the period and open an 11-point lead.

The Pelicans were still within striking distance when Garland dropped a pair of 3s in the final two minutes to put them away. Garland scored 25 and added eight of his 11 assists in the second half.

Evan Mobley added 19 points as Cleveland improved to 19-4 at home. 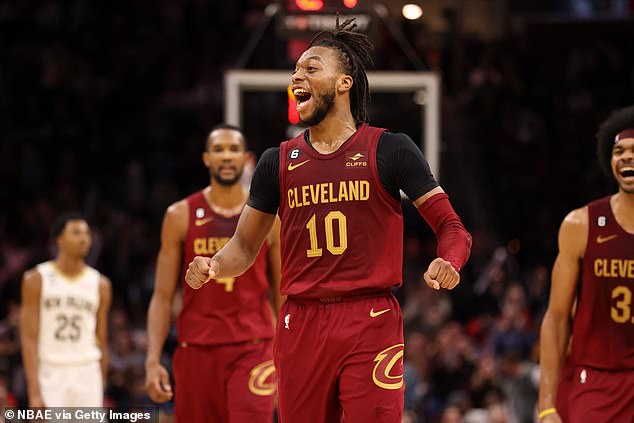 The Pelicans were once again without stars Zion Williamson (strained hamstring) and Brandon Ingram (bruised toe) due to injuries. New Orleans has managed to stay competitive despite missing 46 points per game from those two.

McCollum has had to carry the scoring load with Williamson and Ingram out. He only had four points at half before scoring 14 in the third quarter to help the Pelicans carry a lead into the fourth.

That’s when the Cavs buckled down on defense and Garland went to work.

Mitchell started slowly before asserting himself late in the first half, scoring nine points and making a 3-pointer in the final second to pull the Cavs within 50-47 at the break. 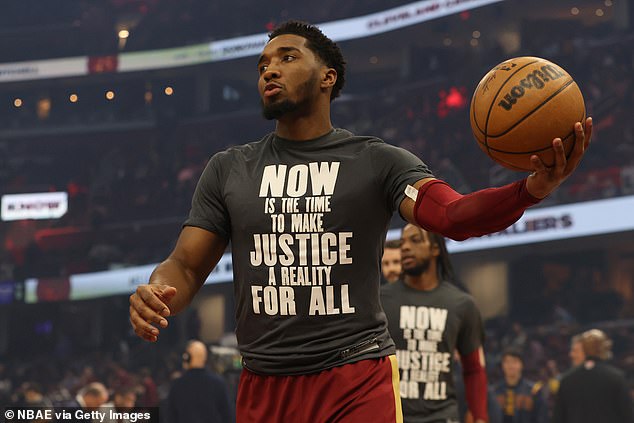 Dejounte Murray scored 12 of his 28 points in the final period as Atlanta held off Miami´s comeback attempt.

Trae Young added 24 points as the Hawks, who never trailed, moved back to .500 with the win. 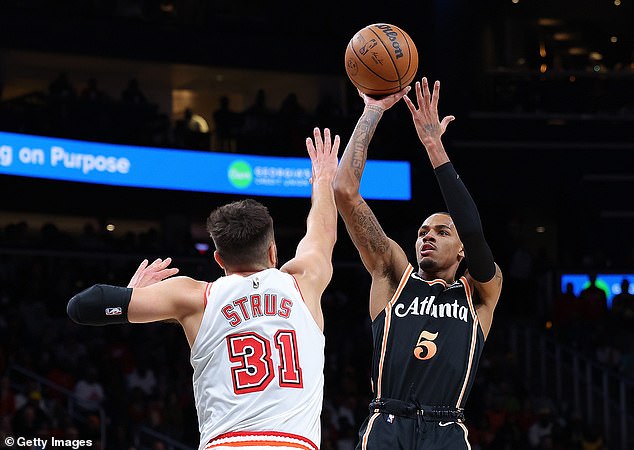