Kyrie Irving and Kevin Durant each scored 32 points and the Nets extended their longest winning streak since moving to Brooklyn to nine games with a 125-117 victory over the Cleveland Cavaliers on Monday night.

The Nets withstood a sensational 46-point performance by Darius Garland, who single-handedly kept the Cavs close in the fourth.

Brooklyn has won 13 of 14 and is beginning to look like an NBA title contender after so much needless drama.

T.J. Warren added a season-high 23 points for the Nets, who handled one of the teams they’re chasing in the Eastern Conference standings after beating Milwaukee by 18 on Dec. 23.

Durant moved past Tim Duncan (26,496) into 15th place on the career scoring list when he dropped a 20-foot jumper in the second quarter. Next up for Durant is Dominique Wilkins (26,668).

Irving made a season-high seven 3-pointers — and two key free throws with 41.1 seconds left — while being booed nearly every time he touched the ball by fans who cheered him during six seasons with Cleveland. 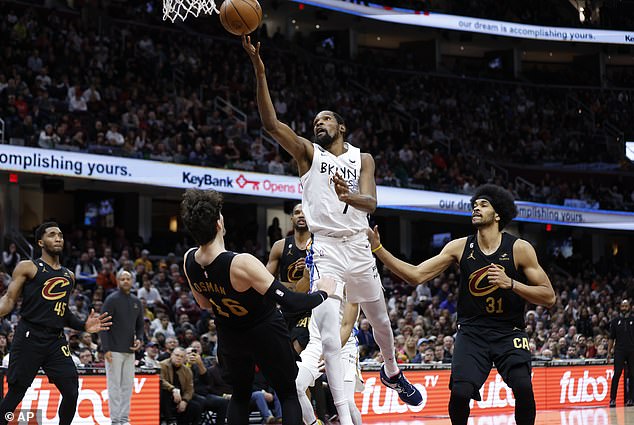 Garland finished 14 of 20 from the field and added eight assists with just one turnover in 40 minutes to lead the Cavs, who dropped their second straight at home and dropped to 16-4 at Rocket Mortgage FieldHouse.

Donovan Mitchell added just 15 points — 13 below his average — on 5 of 16 shooting while being guarded primarily by Brooklyn’s Ben Simmons.

The Cavs were only down 12 entering the fourth before Irving scored eight quick points, the last on a long 3-pointer from way beyond the top of the key to give Brooklyn its biggest lead at 102-83.

However, Garland wasn’t done (he scored 18 in the fourth) and pulled the Cavs within 121-117 moments after Durant fouled out. With a chance to make it tighter, Garland’s runner in the lane was blocked by Nic Claxton and the Nets survived. 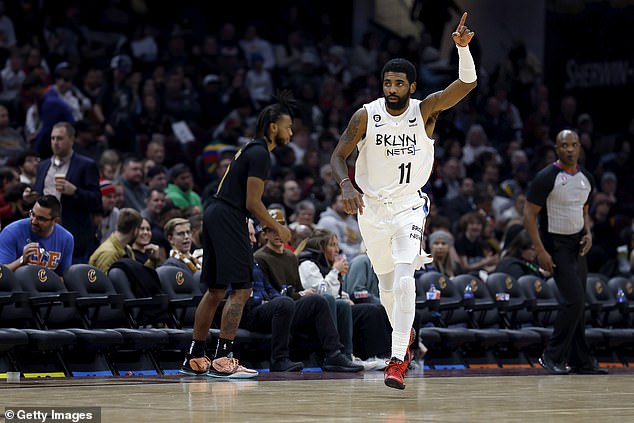 Max Strus scored 19 points, Kyle Lowry added 18 points and nine assists, and the Miami Heat got back to .500 by holding off the Minnesota Timberwolves 113-110 on Monday night.

Orlando Robinson scored 15 points and Tyler Herro had 14 for the Heat (17-17), who were without Jimmy Butler (ankle) and Bam Adebayo (illness).

Anthony Edwards led all scorers with 29 points for Minnesota (16-18). Naz Reid had 21 points and 10 rebounds for the Timberwolves, who got 16 points from Jaden McDaniels, 13 from DeAngelo Russell, and 10 apiece from Austin Rivers and Rudy Gobert. 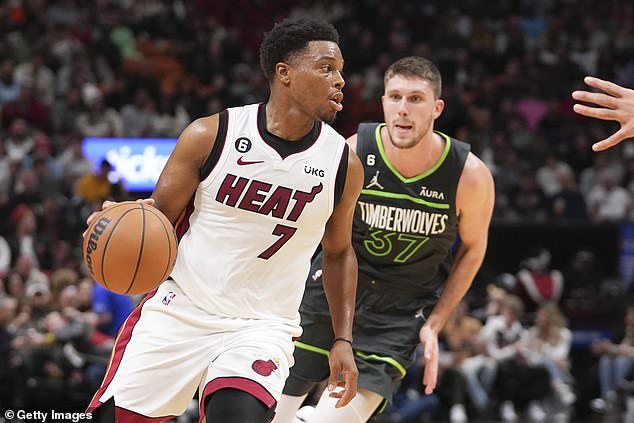 Paul George scored 32 points and the Los Angeles Clippers overcame a 14-point deficit in the final 3:34 of regulation to beat the Detroit Pistons 142-131 in overtime on Monday night.

Terance Mann hit a tying jumper with 5 seconds left in regulation to cap a closing 16-2 run for the Clippers, who trailed 126-112 with 3:34 remaining. Los Angeles then outscored Detroit 14-3 in the extra period. 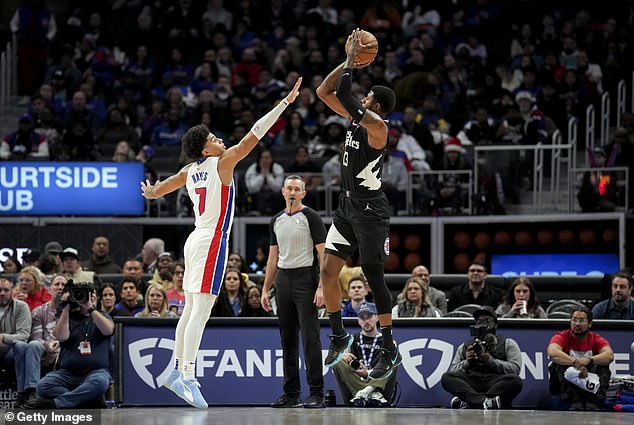 Rookie Bennedict Mathurin led the Pacers with 15 points in 22 minutes off the bench. Myles Turner scored 14 points for Indiana. 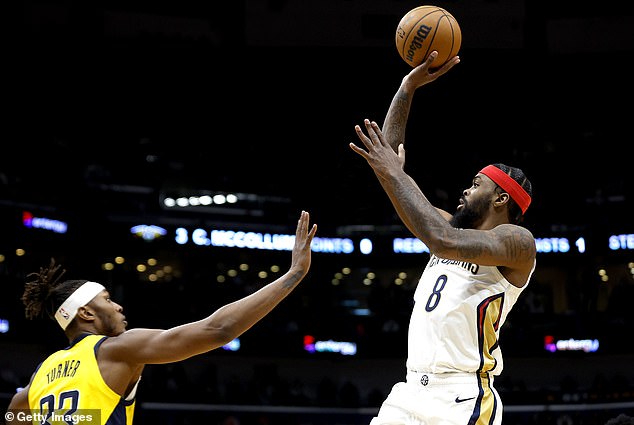 Kevin Porter Jr. scored a season-high 36 points, and the Houston Rockets used a 17-1 run in the third quarter to beat the Chicago Bulls 133-118 on Monday night, snapping a five-game losing streak.

Alperan Sengun added 25 points and Jalen Green had 24 for Houston, which scored the first 10 points of the game but blew an 18-point lead before its third-quarter spurt.

DeMar DeRozan scored 31 for the Bulls, who won their previous three games. DeRozan passed George Gervin for 44th place on the career scoring list with 20,727 points. 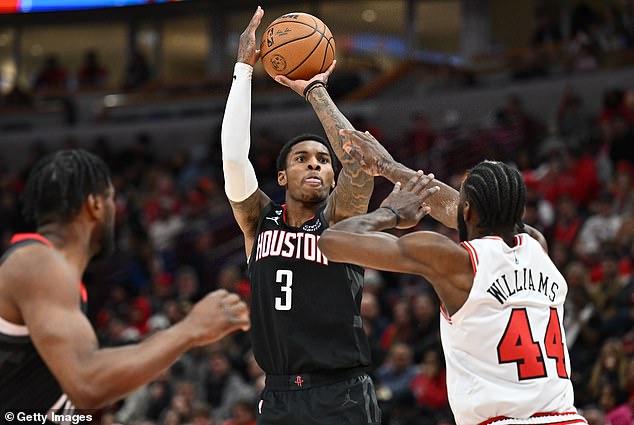 Kevin Porter Jr. #3 of the Houston Rockets shoots over Patrick Williams #44 of the Chicago Bulls

The Spurs led 121-110 with 2 1/2 minutes remaining. The Jazz scored seven points in 33 seconds, but could not complete the comeback.

Lauri Markkanen had 32 points and Jordan Clarkson added 25 for Utah.

Jones had 11 points and Jakob Poeltl scored 16 for San Antonio. 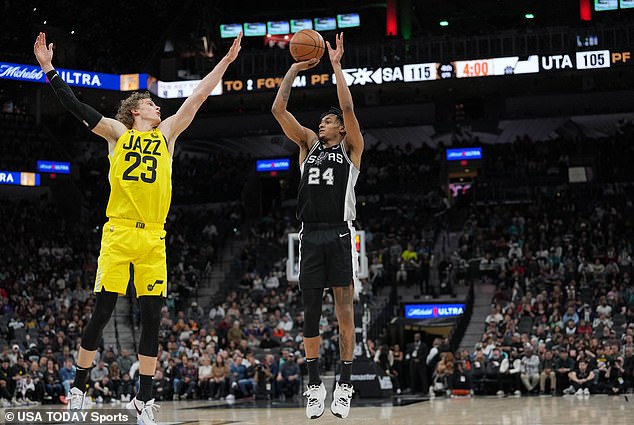 Jerami Grant record a 32-point double-double in Portland’s win over Carolina, he also had 10.

Jusef Nurkic and Josh Hart also had a double-doubles in the win, recording 28 points and 15 rebounds, and 11 points and 13 rebounds respectively.

LaMelo Ball continued his string of strong performances since returning from injury after leading the Hornets with 27 points. He also recorded 7 assists, and 7 rebounds.