Megyn Kelly is reportedly getting some support from NBC as she tries to navigate her way through what has been a tumultuous premiere week for her new morning show.

Page Six reports that Debra Messing was told to stop speaking ill of Megyn and her new show after launching a surprise attack on the embattled host just 24 hours after she appeared on the premiere episode.

‘Debra was told to cut it out by someone high up in the NBC Entertainment division run by Bob Greenblatt, via her agent or publicist,’ said an unnamed executive.

The ‘Will & Grace’ star made waves on Tuesday when she voiced her annoyance over having appeared on the show as well as her concern for Megyn’s behavior during their interview.

NBC cannot be all that mad at Messing either, as it was revealed earlier this week that she will be receiving a star on the Hollywood Walk of Fame. 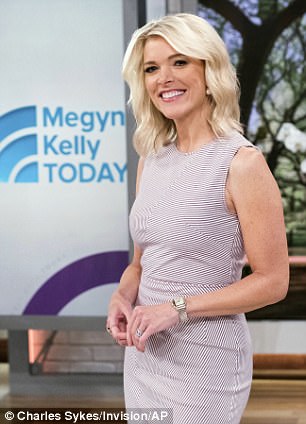 Must see TV: Debra Messing (left) has found herself in trouble with NBC for criticizing Megyn Kelly (right) and saying that she regretted appearing on her morning show 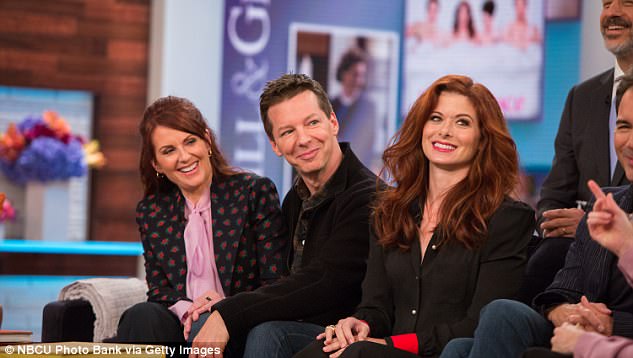 Side-eye surprise: ‘Debra was told to cut it out by someone high up in the NBC Entertainment division run by Bob Greenblatt, via her agent or publicist,’ claims one NBC exec (l to r: Megan Mullally, Sean Hayes, Debra Messing)

‘Honestly I didn’t know it was MK until that morning. The itinerary just said Today Show appearance,’ write Messing in a comment on her Instagram page.

‘Regret going on. Dismayed by her comments.’

Messing’s claim that she did not know about the appearance seemed to be confirmed on Thursday when the ‘Will & Grace’ cast appeared on ‘Today’ in a pre-taped segment with Matt Lauer and Savannah Guthrie that was filmed on Monday.

Megyn’s questions to the cast of ‘Will & Grace’ on Monday were shockingly banal and had all been asked and answered by the actors countless times before in the 10 months since they reunited to film a short video in support of Hillary Clinton ahead of the election last year.

That segment then ended on an incredibly awkward note after a gay superfan, Russell Turner, briefly joined the group on stage for some hugs with the cast and a minute-log interview with Megyn.

The brief interview with Turner began with Megyn asking if it was true that he became both a lawyer and gay because of the show and its leading man, played by actor Eric McCormack.

Turner jokingly affirmed that was in fact the case, while also kindly providing a bit of color and humor to the polar question by adding that Will had the perfect ‘trifecta’ in that he was gay, a lawyer and had the ‘best apartment in New York City.’

He was then tossed back into the audience after his one question, with Megyn sending him off by stating: ‘I don’t know about the lawyer thing. But I think the ‘Will & Grace’ thing and the gay thing will work out great.’ 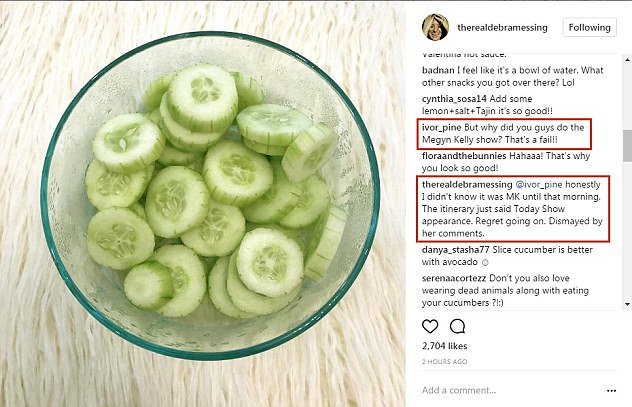 TV’s newest drama: ‘Honestly I didn’t know it was MK until that morning. The itinerary just said Today Show appearance,’ wrote Messing (above) 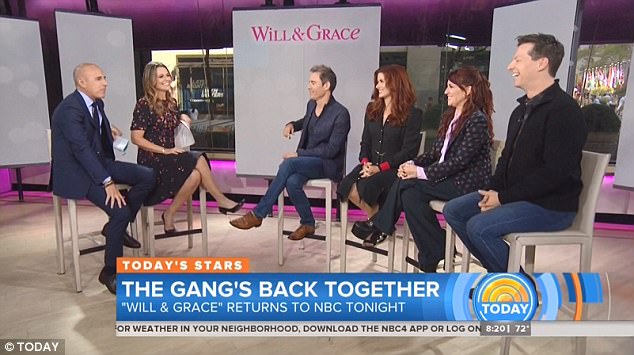 That other ‘Today’: Messing also said that she was never told that she was going to appear on Megyn’s show, and believed she was appearing on the earlier block of ‘Today’ (l to r: Matt lauer, Savannah Guthrie, Eric McCormack, Messing, Megan Mullally amd Sean Hayes)

Megyn has also a made a number of controversial comments in the past about the LGBT community.

On one episode of ‘The Kelly File’ she told Family Research Council head Tony Perkins: ‘Gay rights are more and more protected in this country, Christian beliefs and Christian rights, not so much.’ 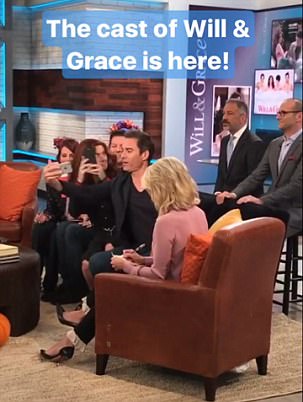 Doing their own thing: The cast was seen in an Instagram post shared by the show ignoring the host during a commercial break

That clip was highlighted on Sunday when it appeared in a clip package that aired on ‘Last Week Tonight.’

Megyn provided Perkins with a platform to spread his anti-gay message on her Fox News show throughout the years, as he appeared over 30 times to speak with the anchor.

The one openly-gay actor in the ‘Will & Grace’ cast, Sean Hayes, seemed to have no problem with Megyn however as he posted a photo on Twitter Monday saying he was ‘having fun’ at the show.

And a source who was at the show said the Megyn’s comment to the superfan was nothing more than a bit of humor.

‘She was obviously making a joke, that was clear to the superfan – who was ecstatic, and the audience,’ said the source.

‘It became even clearer when she spent much of the interview asking the show’s creators how proud they were of the positive social impact of Will & Grace and the progress it brought about for gay rights.’