One hundred years ago a third of the global population — some 500 million people — became infected with ‘Spanish flu’.  Up to 50 million of them died in the 1918 pandemic.

Ever since, scientists have been alert to the possibility of another super-virulent influenza virus.

Today, with more than seven billion people on the planet, numerous densely-populated mega-cities, and the ease of modern air travel, the death toll from such a virus could be unimaginably higher. 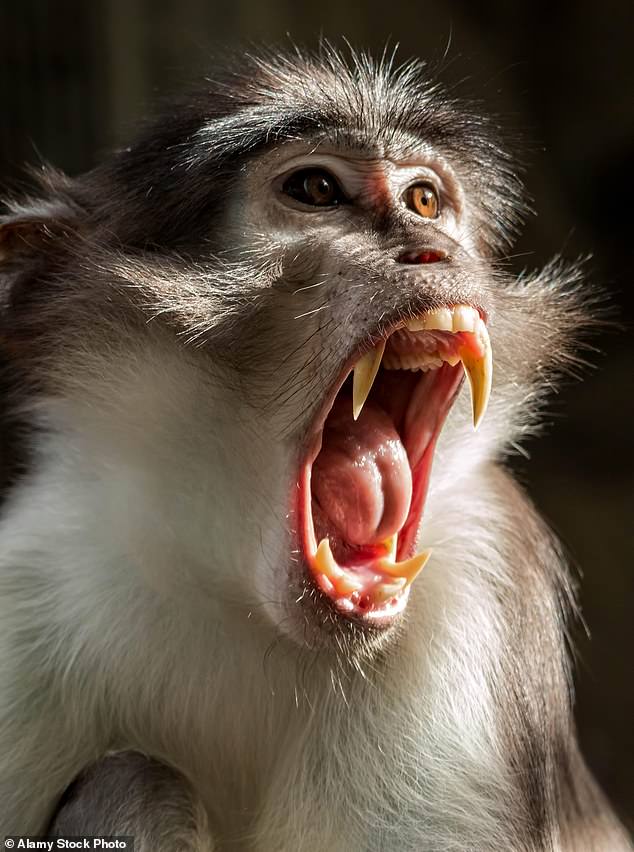 A 40-year-old woman was rushed to hospital on Tuesday by staff wearing biohazard gear. The disease started from animals in Africa 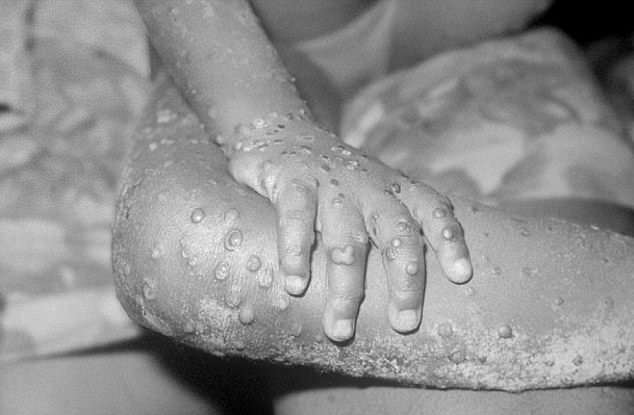 Now, the emergence of a disease called monkeypox in Britain, has raised another scenario in which the next killer pandemic isn’t the flu virus at all. Instead, it is a highly infectious agent that has jumped the species barrier, spreading from wild animals in Africa to humans.

Initially, it would infect people locally, but while spreading and evolving, intermingling its genetic material with other human viruses and even human DNA, it would become ever more contagious until it could be transmitted merely by a cough or a sneeze. 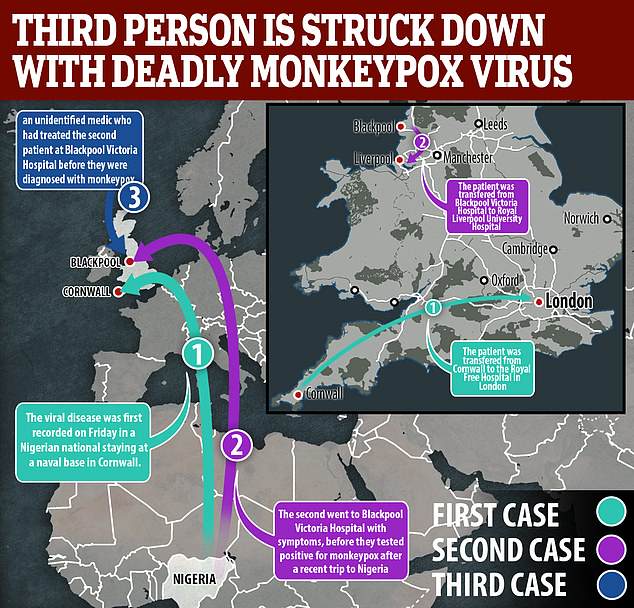 Infectious disease experts have long warned of the possibility. Yesterday, the third confirmed case of monkeypox, in a female hospital healthcare assistant, heightened such fears.

The 40-year-old woman was rushed to hospital on Tuesday by staff wearing biohazard gear. She is being treated in isolation at the Royal Victoria Infirmary in Newcastle, 150 miles from her home in Fleetwood, Lancashire.

Family members and colleagues of the hospital worker are reportedly waiting to be vaccinated, while public health officials are tracing anyone she may have had contact with in the 24 hours before she fell ill.

So how worried should we be?

Monkeypox is caused by a close relative of the smallpox virus, but is less infectious and usually causes a mild illness, with a fever, headache and a rash that turns into chickenpox-like blisters. However, in some West African outbreaks ten per cent of cases — an alarmingly high number for an infectious disease — have proved fatal.

Smallpox was eradicated in 1980 following a global immunisation campaign led by the World Health Organisation (WHO), but some scientists are now suggesting that monkeypox virus may be mutating to fill the lethal vacancy. 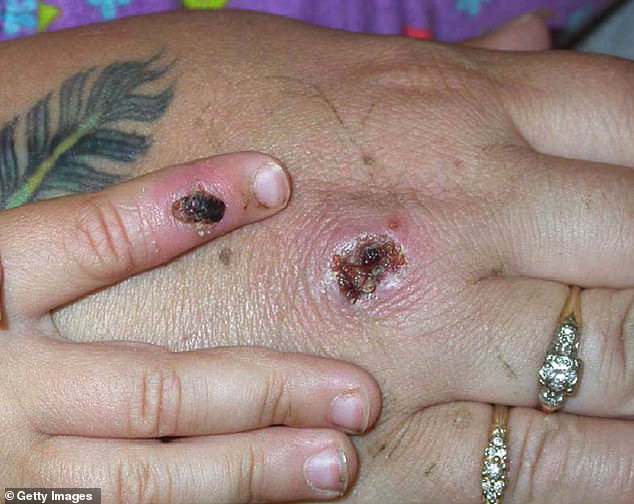 The first two British cases, one in Cornwall and another in Blackpool, were diagnosed in people believed to have become infected in Nigeria where a large outbreak started last year — the first cases in the country for 40 years. It is the third case that has triggered questions about the virus’s contagious power.

The healthcare worker at Blackpool Victoria Hospital is not believed to have had any direct contact with the infected traveller from Nigeria, but may have become infected while changing the patient’s bedding. She has said she was wearing gloves that were too short to cover the skin on her arms.

According to the WHO, monkeypox is spread only by close contact with an infected person’s spit, blood or pus. But has a mutation in the virus rendered that guidance perilously out of date? Could it have already evolved into a strain that can spread more easily between humans.

Scientists at Public Health England are urgently analysing samples of the virus to determine its genetic makeup. They will then compare it with samples collected in Central and West Africa, where cases of the disease have risen 20-fold since the 1980s. Monkeypox is believed to have originated in sooty mangabey monkeys and rope squirrels, and first infected humans who consumed them as ‘bushmeat’ more than 50 years ago.

Viruses that can ‘jump’ from animals to humans are called zoonoses. The Black Death, AIDS/HIV and Spanish flu — the world’s three biggest known pandemics — are all zoonoses.

Ebola which first struck in Zaire in 1976 and killed as many as 90 per cent of those infected in the 2014 epidemic, is another zoonotic disease, carried by bats in central Africa. Could monkeypox be the next one?

Our first inkling of monkeypox’s existence came in the 1950s, when doctors in Africa noticed the emergence of a viral infection in their patients that seemed similar to smallpox but was less contagious. Since then, the virus has become steadily more infectious.

Nigeria is currently experiencing the largest documented epidemic of human monkeypox — with 152 cases reported and seven deaths so far confirmed. Certainly, the WHO is taking it seriously. They are warning that ‘the emergence of monkeypox cases is a concern for global health security’.

A leading British authority on epidemics, John Oxford, emeritus professor of virology at Queen Mary, University of London, believes that the world is currently due a very large animal-originated pandemic. 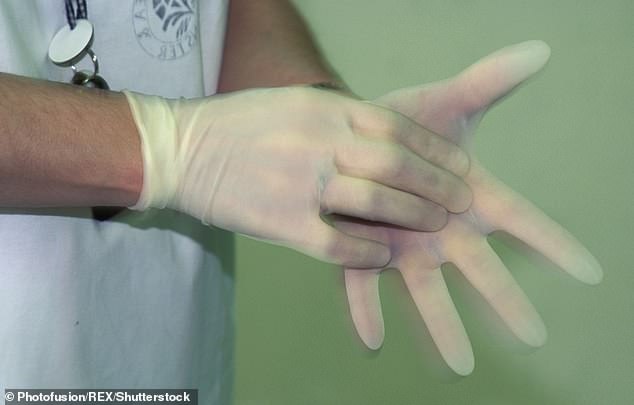 However, he’s playing down fears that monkeypox could be the one. He explains that this is because monkeypox is a DNA virus — its genetic material is made up of a chemical known as deoxyribonucleic acid. ‘These viruses don’t mutate rapidly, they are stable . . . ’ he says.

By contrast RNA viruses, which have ribonucleic acid as their genetic material, are far less stable and can mutate into more dangerous forms very quickly.

Often they do this by ‘co-opting genes’ from other human viruses present in the infected individual. This gene-swapping effectively enables viruses to ‘learn new ways to be contagious. RNA viruses include Ebola, SARS, rabies, the common cold and influenza.

That’s not to say monkeypox may not prove to be an alarming exception to this rule. One leading scientist who has studied monkeypox in Africa for 15 years disagrees with Professor Oxford.

Professor Anne Rimoin, an epidemiologist at the University of California, Los Angeles, warns that despite being ‘stable’ DNA virus, monkeypox is mutating into more contagious versions.

Chillingly, an investigation she co-authored in the journal Emerging Infectious Diseases warns that monkeypox ‘is adapting for efficient replication in a novel ecological niche — humans’. ‘The global effects of the emergence of monkeypox strains that are highly adapted to humans could be devastating,’ the report adds.

Because of ‘the apparent rapid evolution of this virus, health authorities in presently unaffected areas should become vigilant and actively prepare to take immediate action’, it concludes.

So what defensive action could we take if a mutant monkeypox virus is unleashed in Britain? Well, it seems we are at least well prepared and have Tony Blair to thank. After 9/11, the former Prime Minister ordered £80 million worth of the vaccination for use in a ‘smallpox plan’, to protect the population in the event of a terrorist attack that used the virus as a germ-warfare weapon.

At the time, the initiative was condemned as a waste of money, not least because one of Blair’s chief political donors — Lord Drayson — owned the company that manufactured the inoculations. 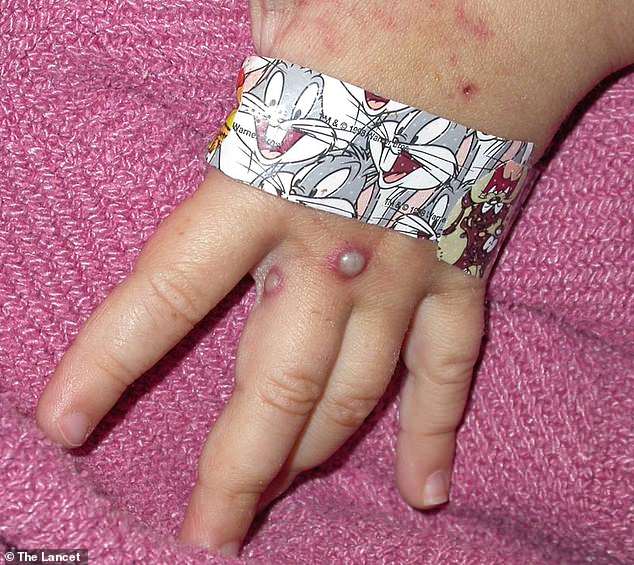 Monkeypox, thought to have been spread by prairie dogs, was detected in the US in 2003

Now however Blair’s controversial move may prove an unwitting masterstroke of forward planning, because all the available evidence shows the smallpox vaccine may effectively protect people against infection from monkeypox, too.

Indeed, it the smallpox vaccine that will be given to contacts of the healthcare worker in Blackpool. Furthermore, the majority of Britons aged over 50 could well already be protected, as they were already vaccinated in childhood against smallpox.

By sheer chance, we appear to be well-positioned to deal with any monkeypox ‘apoxcalypse’. But it’s only a matter of time before the next virus emerges.

In his book Spillover, the award-winning American natural-history writer David Quammen warns that the human race faces a viral ‘doomsday’ if deadly infections learn the contagious trick that flu and cold microbes employ — spreading in coughs and sneezes.

We have been warned.