More than half of Americans wants to see the US ditch paper currency and move to cashless payment systems, as survey reveals.

The research found 58 percent of participants plan to make the shift once the coronavirus pandemic is over, but one in three said they no longer use physical money due to health concerns.

Along with limiting the spread of the virus, an overwhelming 77 percent noted they simply prefer to pay with a credit or debit card over cash – and 55 percent said they used one of the payments for their most recent purchase.

The findings seem to be a result of an individual’s generation, as only 40 percent of millenials carry bills, while 59 percent of baby boomers carry the physical money.

A new survey by Travis Credit Union found that consumers are more than twice as likely to make a purchase with a credit card, debit card or digital payment than with paper money. Some 58 percent said they’d like to move to a cash-free system

The study, conducted by Travis Credit Union (TCU), polled more than 2,000 Americans to see how many people are carrying cash and why others opt for plastic.

Of those who preferred cash, more than half said they liked the privacy and security it afforded.

Just 14 percent said they liked money because it kept them more on budget.

When Americans do have cash on hand, according to TCU, they’re carrying an average of $46. 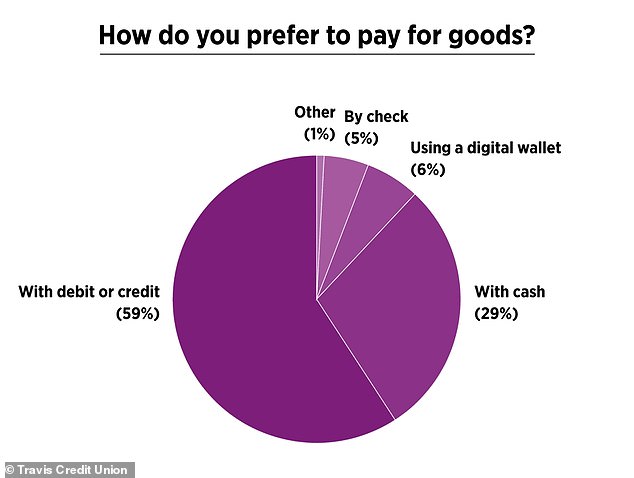 An overwhelming 71 percent of respondents in Travis Credit Union’s survey preferred to pay with something other than cash.  Of those who preferred cash, more than half said they liked the privacy and security it afforded them

While convenience and safety have fueled the shift overall, more recently the coronavirus has led many to re-evaluate using bills and coins.

Half of the people TCU spoke with are using less cash than they were prior to the pandemic, and 60 percent do not think they will go back to using it regularly when it ends.

Some stores have also pressed pause on cash during the pandemic but businesses like Dig Inn and Sweetgreen were rejecting paper money in many locations even before COVID-19.

Starbucks in Seattle stopped accepting paper currency at the start of 2018 and Drybar, a nationwide chain of blow-dry salons, has also turned its back on cash. 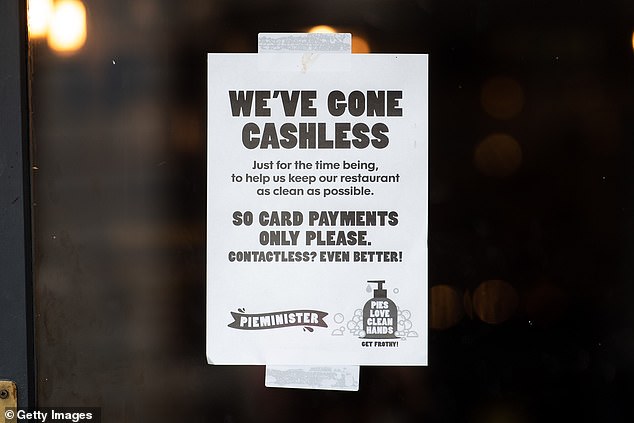 A sign in the window of a Pieminister restaurant in Cardiff, Wales, informing customers the store has gone cashless as a COVID-19 measure on March 17, 2020. Half of the people TCU spoke with are using less cash than they were prior to the pandemic, and 60 percent don’t think they’ll go back to using it regularly when it ends

Some British pubs have taken the same approach.

‘The benefits of going cashless are huge,’ said Mike Keen, whose bar, the Boot, only takes card or phone.

‘Cash has always been a pain. You’ve got problems with theft. The banks charge a fortune for you to pay cash in, they take a cut of everything you pay in,’ he said.

‘You have to organize change, go into town, park, queue up which is another security risk or pay a firm like Securicor to pick it up. The bottom line is so hard we have to take advantage where we can.’

While processing credit card payments cost him up to 1.5 percent per transaction, Keen said his insurance rates have dropped since there’s no cash on the premises.

Whole Foods may ditch cashiers altogether, using cameras and sensors to track customers as they shop and letting them walk out without ever stopping at a register.

Jeff Wilke, Amazon’s Chief of Consumer, reportedly wants to bring the technology to Whole Foods before he retires in early 2021.

Going cashless adds convenience, but it’s not without its detractors.

Seventy percent of the people in TCU’s survey worried about having their privacy breached when using non-cash methods.

In January 2020, New York City banned restaurants and other businesses from going cashless, claiming it discriminated against less affluent consumers who didn’t have credit, debit or digital payment systems.

‘Whatever your reasons, consumers should have the power to choose their preferred method of payment,’ city councilman Ritchie Torres said at the time.

Several other cities and states, including New Jersey, Massachusetts and San Francisco, have similar bans.

In Sweden, half the nation’s retailers are expected to go totally cashless by 2025.

Bills and coins represent just 1 percent of the country’s economy, compared with 10 percent in the rest of Europe and 8 percent in the United States,

A study conducted by Ikea found that, while less than one percent of all sales were in cash, employees were spending 15 percent of their time taking, counting and handling physical money.

Swedish financial authorities are lobbying for the continued minting of notes and coins, at least until the government fully understands the ramifications of going cash-free.

‘We need to pause and think about whether this is good or bad, and not just sit back and let it happen,’ said Mats Dillén, the head of a Swedish Parliament committee studying the matter.

‘If cash disappears, that would be a big change, with major implications for society and the economy.’