A hero neighbour stopped a potential explosion by pulling a can of burning petrol from underneath a car after arsonists planted it there.

CCTV footage shows two hooded men pouring fluid onto the back of a Range Rover Sport parked on a driveway in Hardwick, Stockton.

The thugs then set a petrol can alight beneath the vehicle and run off as it bursts into flames.

The petrol can burns for more than three minutes before a neighbour spots the fire.

Two hooded men pour fluid onto a Range Rover parked on a driveway in Hardwick, Stockton 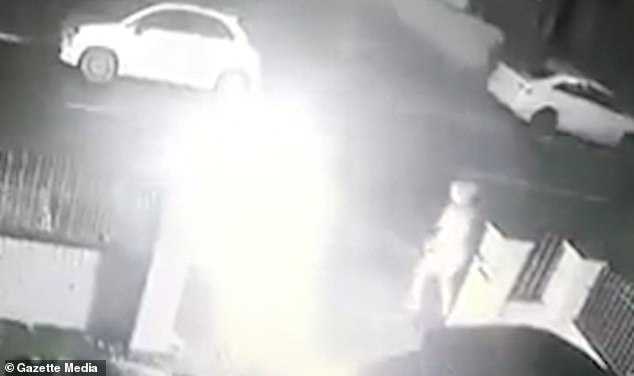 Emily Davey can be seen running across the road with a bowl of water which she pours over the flames.

However this does not extinguish the fire so Ms Davey pulls the burning petrol can out from under the car and onto the pavement a safe distance away.

The Range Rover’s owner Jodie Dyball has praised her neighbour’s heroic actions and said she ‘saved lives’ for stopping a potential explosion.

Speaking of the incident, which happened just after 11.20pm on Tuesday, Jodie said: ‘I can’t think about what could have happened. 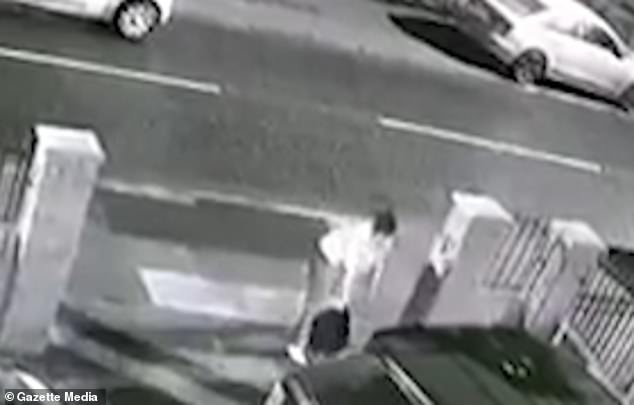 ‘If the fire had ignited the fuel tank in the car, it would have exploded and then who knows what.

‘Emily said she thought it was a candle or something at first, but wasn’t really thinking and just pulled it out.

‘She said her face was a bit warm, like it might have burned a bit, but she isn’t injured.

‘There’s oxygen bottles all over next door’s house – they would have went up too.

‘She’s saved the lives of eight adults and four kids, and all our pets. My dogs were in the passage not far from where the car is parked.’

Miss Dyball was at home with girlfriend Lauren Aithwaite, 24, when the blaze was started.

She said she was made aware when Emily rang her: ‘I looked out and saw the flames straight away, and then panic starts.

‘Everyone was in shock. We’ve obviously caught the lads on camera, since it happened I’ve had new cameras fitted.’

Miss Dyball said she had a vehicle targeted last year by vandals but said on this occasion things could have been much worse.

A Cleveland Police spokeswoman said the force has received a report of the incident and is investigating.