Colette Donaghey, 50, pictured, was convicted of racially abusing her neighbour and calling him ‘pushti’, Turkish slang for homosexual

A woman who told her Turkish neighbour to ‘go back to your own country’ and hurled gay insults against him has been found guilty of racial abuse.

Colette Donaghey, 50, taunted Ediz Enver over her garden fence and called him a ‘pushti’, which is Turkish slang for homosexual.

The trial at Chelmsford Crown Court heard she also told him ‘Why don’t you go back to your own country?’, ‘It was so nice around here and then you get scum coming in’ and referred to him as the ‘d***head next door’.

Donaghey, of Nazeing, near Waltham Abbey, claimed she was talking on the phone to a 90-year-old friend who once had a Turkish boyfriend.

She claimed that Mr Enver, who told the court she did not even have a phone in her hand at the time, was listening in to that conversation.

She admitted she used the word ‘pushti’, but said she was repeating something her friend had said and claimed she did not know what it meant.

Donaghey also admitted she used the phrase ‘thick lowlife scum’, but denied saying that Mr Enver should return to his own country.

She then claimed she was the one who was racially abused by Mr Enver and accused him of calling her a ‘filthy Irish tramp’ before telling her to ‘mow her lawn’.

But in court Mr Enver denied making any such comment towards her.

Prosecutor Sheilagh Davies told the jury: ‘There’s a background here where previous issues have arisen. We say whatever went on before, it appears to culminate in this incident on 17 June.’

Giving evidence, Mr Enver, in his 30s, who lives with his family at the adjoining semi-detached bungalow, said he was mowing his lawn while Donaghey was ‘tracking him’ as he moved around his 200ft back garden.

He said she was pretending to make a phone call but had no phone in her hand.

Mr Enver told the court: ‘It sounded as if she was speaking to a third person but there was no phone in her hand.

‘She was not having a conversation with anyone unless there’s an imaginary person.’

He added: ‘She said ‘pushti’ which means f****t in Turkish. She repeated it over and

over. That’s what prompted me to get the recorder on.’

Mr Enver made a four minute iPhone recording of Donaghey, which caught her saying ‘pushti’ as well as calling him ‘scum’ and a ‘d***head’.

Mr Enver said the whole incident lasted about 35 minutes and he made the audio recording because he wanted to gather evidence.

He added the comments ‘just spoilt everything completely’ and he and his partner no longer used their garden much. 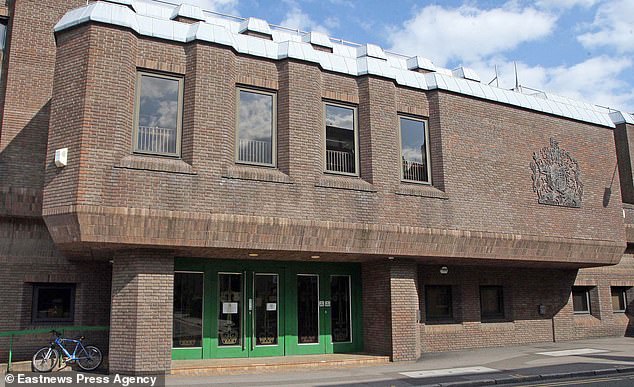 Mr Enver said: ‘Nazeing is lovely, the house is lovely, the views. The garden is what it’s all about and we have just lost that. We are not comfortable any more.

‘I don’t feel comfortable when at home or when away because of this sort of thing.’

Donaghey rang 999 that afternoon to complain to police that she had been racially abused by the person she called ‘the Turkish one’.

She told the court she used that term to differentiate between her Asian neighbours, Ramesh and Deborah Rampersad, on the other side.

She claimed : ‘I heard Mr Enver say “You filthy Irish tramp go and mow your lawn”. I was very upset.’

She denied deliberately go out into the garden because he was there and claimed the recording was ‘a set up by Mr Enver to try and aggravate me to say a lot more than I actually did.’

‘I have never been racist. I am a daughter of Irish immigrants myself and I have been subjected to racism,’ she said.

Donaghey was given bail and will be sentenced in December.