Mother-of-six Madeleine West has revealed she accidentally turned up to a meeting still wearing her fluffy bunny slippers.

The busy actress thought she had ‘nailed’ her morning routine the day she had scheduled two big meetings after the school drop off, but when she turned up to the office she was quickly made aware of her ’embarrassing parenting fail’.

The former Neighbours star shared the gaffe in a post to Instagram, where she is often humorously open about her struggles to stay organised while raising six children.

‘Today I thought I’d NAILED IT. Scheduled like a pro! Set up two big meetings directly after school drop off!’ Madeleine wrote in the post.

‘I took the risk of wearing WHITE. Winning…’

It was only as Madeleine stepped out of the lifts to go to her meetings that she realised she was sporting her pink fluffy bunny slippers rather than office ‘appropriate footwear’. 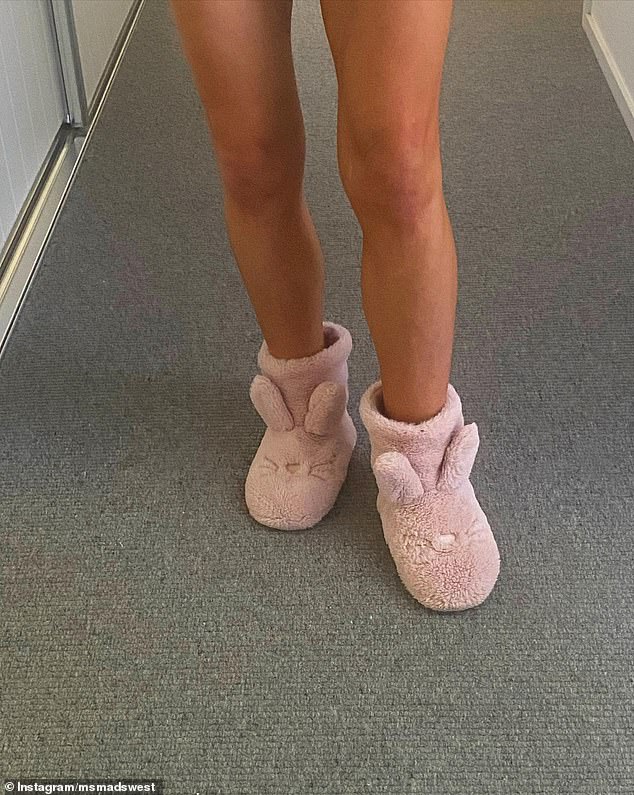 ‘But, with only two options available: retreat or go into battle with no apologies, I chose to strut into those meetings rocking my fluffy bunny slippers like they were precisely the look I was going for: strong, and a little quirky,’ she said.

‘Sums me up pretty darn well.’

The actress, who keeps her kids’ identities private, said the awkward incident was a lesson in not sweating the small stuff and wished her younger self could see her now.

‘The moral is: GO HARD NOT HOME. If you stuff up in the process why not just pretend that’s entirely what you intended to do, then go forth and learn from it,’ she said. 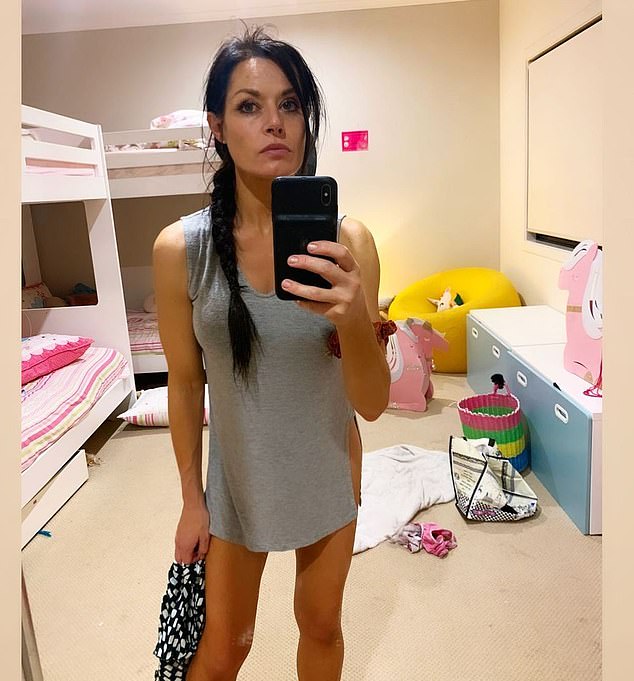 ‘The difference between a fashion faux pas and ‘FAAABULOUS DAAARLING!’ is simply how you wear it… a bit like life.’

Her ‘epic’ footwear fail had many of Madeleine’s 92,000 followers in stitches in the comments.

‘This is the absolute BEST!!!!’ one fan said while a second wrote: ‘I will have to take this advice on board’.

‘Younger you would be so proud of yourself,’ a third added.

‘You sure would have impressed with those fluffy bunnies!! Keeping it real!,’ another replied. 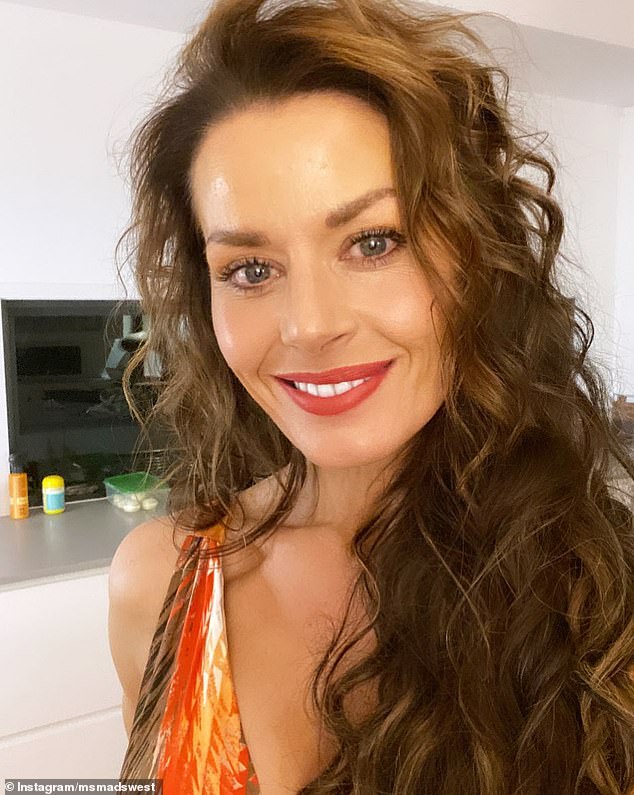 ‘The moral is: GO HARD NOT HOME. If you stuff up in the process why not just pretend that’s entirely what you intended to do, then go forth and learn from it,’ she wrote on Instagram

Previously, the mum was slammed for saying she sometimes puts her children to bed in their clothes for the next day.

Madeleine hit back at trolls for criticising her alternative parenting methods on Today Extra explaining that she was happy her statement was ‘starting a conversation about parenthood’.

However, she was concerned that people were using social media as a battleground rather than as somewhere for friendly, useful support.

‘Social media forums for me are sort of like the village that we had in the olden days. It takes a village to bring up a child,’ Madeleine explained.

‘People go there for support and advice and if we’re tearing each other down on social media, then people who really do need help and a shoulder to cry on aren’t going to reach out for fear of being judged.’ 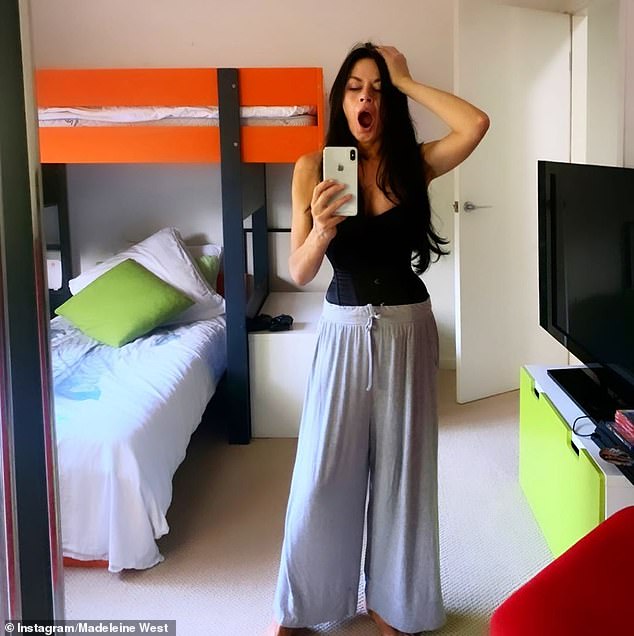 In 2016, Madeleine released a book, Six Under Eight, detailing her experience of having six children under the age of eight.

Throughout it, she offers a frank account of coping with so many children, explaining that she dresses the kids in their outfits for the next day for bedtime.

The author said she finds herself holding a glass of wine during bath time – even if she doesn’t drink it – and keeps two versions of every child’s lunchbox and drink bottle at home in case of an emergency.

The tireless mum also told of how she keeps multiple to-do lists, which she runs over at 5 o’clock in the morning, photographs her children’s favourite lunches in case she isn’t around to make them, and collapses into bed once the final bedtime shift is complete. 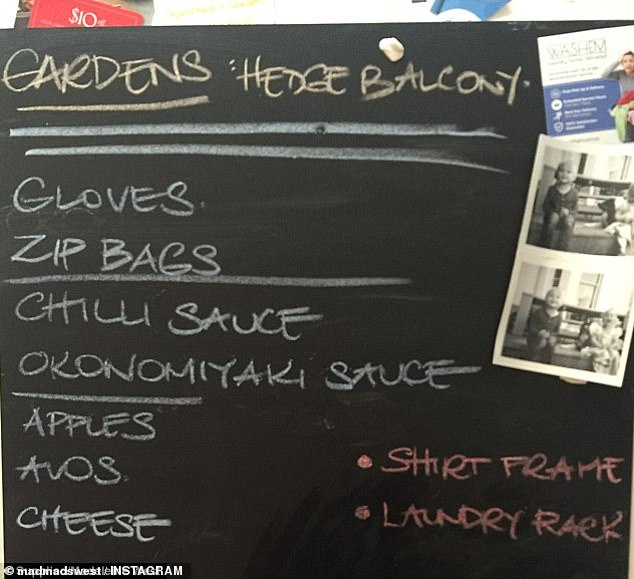 The tireless mum also told of how she keeps multiple to-do lists, which she runs over at 5 o’clock in the morning

‘For anyone with multiple children, it’s all about the lists. I keep hundreds of post-it notes all over the house,’ Madeleine told Daily Mail Australia after the book was published.

‘To-do lists, appointments, long-term goals, the kids’ schedules on blackboards around the house – you name it! There’s nothing more satisfying than ticking something off a list.’

Her self-described ‘anti-parenting manual’ drew criticism thanks to Madeleine’s aforementioned motherhood shortcuts, but according to Madeleine, in spite of the vitriol: ‘After having six kids, nothing shocks me.’

She advised mothers to ‘parent instinctively’, rather than by numbers, colours or various rules they might have read about in the past.

‘Every kid is different,’ she added.