Neil Lennon has dismissed the suggestion that Celtic would compromise on European progression in the pursuit of nine in a row.

Speaking from Austria, where his squad are preparing for their opening qualifier against FK Sarajevo on Tuesday week, the Parkhead boss insists he is energised by the prospect of savouring Champions League nights again.

He said: ‘Europe is a priority for me. The league is the top priority, Champions League qualification is the next one.

‘I wouldn’t subscribe to the theory it’s worth sacrificing Europe for nine, absolutely not. Because when you qualify, the whole season opens up.

‘Players develop, the whole club is rewarded and, from a personal point of view, it develops you as a coach and a manager.

‘It brings the best out in players. Physically and mentally, it’s demanding but it keeps you right at it for the league games too when they come round.

‘It’s fantastic, so the carrot is there in front of us. It’s up to us to go and take it.’ Last night witnessed the second match of Celtic’s pre-season trip to Austria and the squad now moves on to Switzerland, where they will face St Gallen on Tuesday.

After that, it will be homeward-bound and full focus on the flight to Bosnia.

‘We have not had a good look at Sarajevo yet but we are hoping they are maybe not of the quality of some of the teams we have come across,’ continued Lennon. ‘But having said that, we know how difficult these games are to negotiate.

‘The guys here have a decent record – they qualified for two in a row under Brendan (Rodgers) and then last year they fell short.

‘That’s the other thing – you can draw a quality side. In the end, Athens proved to be a plum draw – it was a tough one.

‘I’ve been there myself a couple of times. You can draw a team from Scandinavia that is maybe 10 or 12 games into their season – you know that’s what you can come up against.

‘But our priority, first and foremost, is to try to qualify, just get through the eight games as best we can.

‘It’s just a case of being patient and then the week between the two legs will be really important. 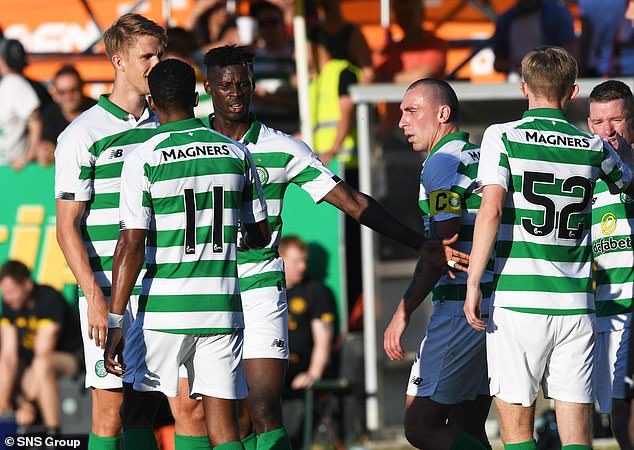 ‘That gives them another week to get up to speed, get the training into them and, by that time, they should be a lot better for it.

‘But the first game is always dicey. Always.’ Lennon hopes to involve his new £7million centre-half Christopher Jullien on Tuesday but there will be no Kieran Tierney as the full-back has returned home to step up his rehab after a double hernia operation.

‘We are going to have a bounce game on Tuesday afternoon against St Gallen’s development team, which will help give match time to those who need some more football,’ added Lennon.

‘We are working them hard at the minute, getting metres into their legs and getting the heart and lungs going as quickly as possible.

‘We are going to need that as we go along.’ Meanwhile, Lennon last night confirmed that midfielder Youssouf Mulumbu has left Celtic.

The Congolese international had been expected to return to Parkhead after the completion of his loan spell at Kilmarnock in the latter part of last season.

However, Celtic have activated a break clause in the two-year deal announced by the club when they signed the player in August of last year.

Mulumbu is currently in Egypt representing his country at the Africa Cup of Nations. However, Lennon admits the 32-year-old will not be back at Celtic Park.

‘Mulumbu is a free,’ said the manager. ‘He is away, so there is not a future here for him.’ Brendan Rodgers had captured Mulumbu as a free agent following a successful spell at Kilmarnock under his former West Brom boss Steve Clarke. However, he made only three appearances before being loaned back to the Ayrshire side for the second half of last season.

Meanwhile, Lennon insists he is oblivious to any transfer interest in winger Scott Sinclair.

Sheffield United were linked with a £2million move for the former Manchester City man in midweek, but Lennon insists Celtic have no plans to sell the 30-year-old, who has spent three trophy-laden seasons in Glasgow.

Lennon handed Sinclair the captain’s armband for the club’s opening pre-season friendly against Pinkafeld on Wednesday and insists he remains firmly in his thoughts for the new campaign.

‘There’s nothing in that one that I’m aware of,’ said Lennon of the Premier League newcomers’ reported interest.

‘Scott had another decent year in terms of his goal return and he has looked after himself really well over the summer and come back in really good condition.

‘We are not looking to sell but there might be interest in him. It just hasn’t manifested himself.

‘I think Scott is happy here. The family is settled and he has had a great time of it at Celtic. The club has won nine trophies in three years and he has been a big part of that.

‘He has come back in even better condition than he was at the end of last season and he has had the bit between the teeth in training.’ Lennon also confirmed that he intends to recruit another striker before the transfer window closes.

Despite having both Leigh Griffiths and Vakoun Issouf Bayo returning to fitness to complement Odsonne Edouard, Lennon wants another attacking option.

‘We have three at the minute but we always like to go with four,’ he added.