NeNe Leakes captivated the crowd on Saturday at the 2022 Revolt Summit in Atlanta, Georgia where the former RHOA star held court on stage with Amber Rose and Ray J.

Dressed in a peach-colored catsuit that hugged her fabulous curves, the 55-year-old reality TV star contributed to a panel discussion about the future of cancel culture.

Leakes was a commanding presence as she dazzled the crowd with her massive 15.2-carat diamond ring from her late husband Gregg Leakes who passed away a year ago.

Pretty in peach: NeNe Leakes wore a peach catsuit when she attended the 2022 Revolt Summit at 787 Windsor in Atlanta, Georgia last week

Her peach look provided a much-needed pop of color to the panel as Amber Rose and Ray J were clad in black.

Charming the crowd through her long honey-colored extensions, the former Housewife flashed her flawless white smile and declared that she can’t be canceled simply because she is ‘the NeNe Leakes.’ 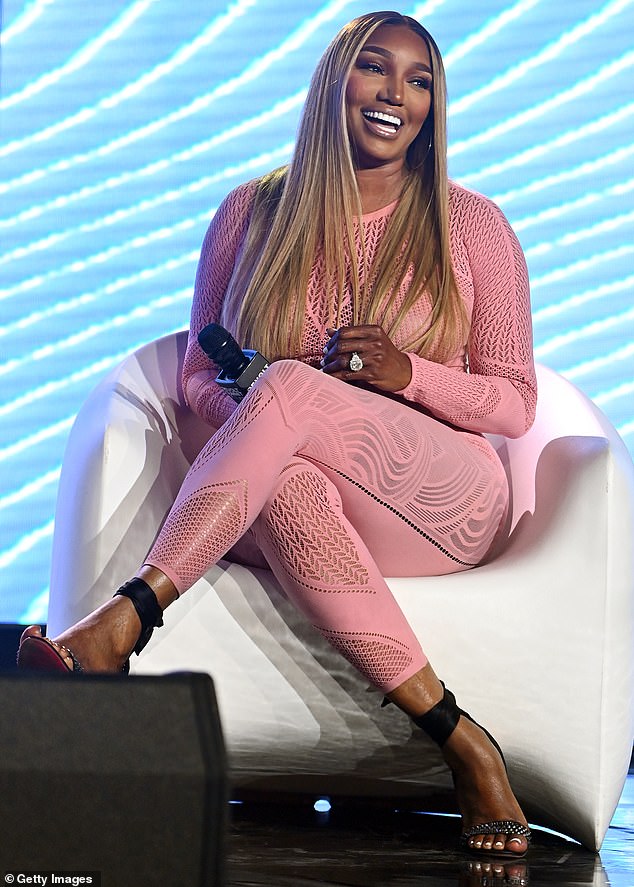 This declaration comes after a tumultuous year that saw the RHOA founding cast member pursue legal action against her former network and bosses.

Originally filed in April of this year, Nene’s lawsuit alleged that she was subjected to a hostile and racist environment on the show that made her a star.

She accused the show’s producers of fostering ‘…a corporate and workplace culture in which racially-insensitive and inappropriate behavior is tolerated—if not, encouraged.’

Leakes has further claimed that she was blackballed from the industry during her tumultuous legal battle with Bravo, which ended in August when Leakes dismissed her lawsuit without prejudice. 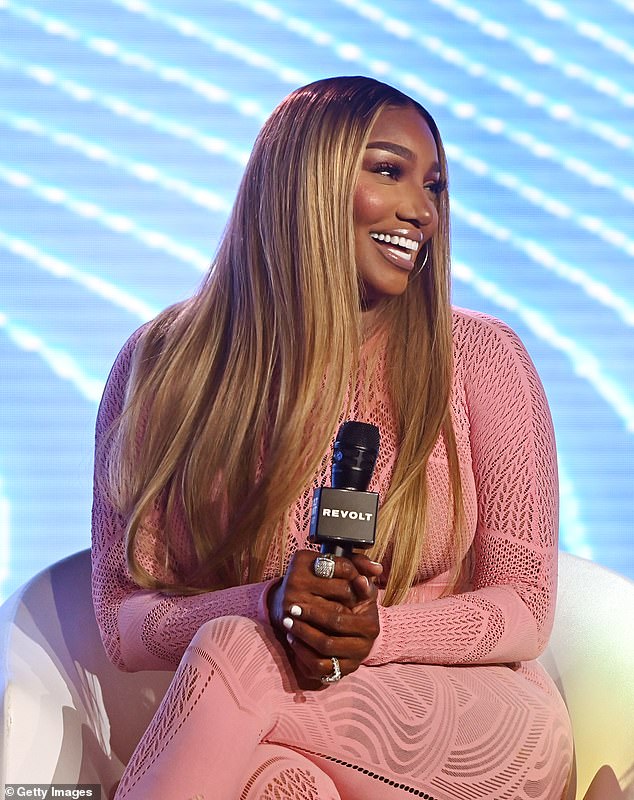 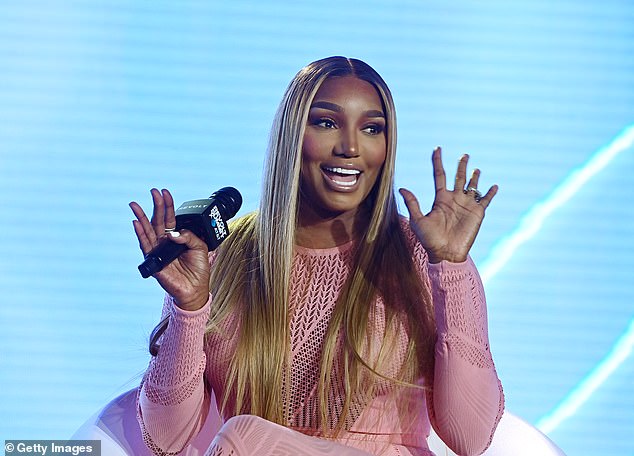 A stunner: Her makeup was flawless with nicely filled in eyebrows

The star has since proven herself to be resilient by branching out into other businesses.

Born Linnethia Monique Leakes, she has been heavily promoting her namesake restaurant and bar in her hometown of Duluth, Georgia.

The Linnethia Lounge opened in 2021 and features live entertainment along with an ‘over-the-top’ Sunday brunch. Nene posted a video on Instagram over the weekend of her candlelit nightclub packed with dancing patrons. ‘WE IN HERE TONIGHT’ she captioned the post in all caps along with three fire emojis. The entrepreneur appeared to be enjoying a hookah at her own private table overlooking the fun

This hotspot is the star’s latest business venture since losing husband Gregg to colon cancer last year at the age of 66. After grieving the loss of that 25-year relationship, the mother of two has recently found love again with boyfriend Nyonisela Sioh. 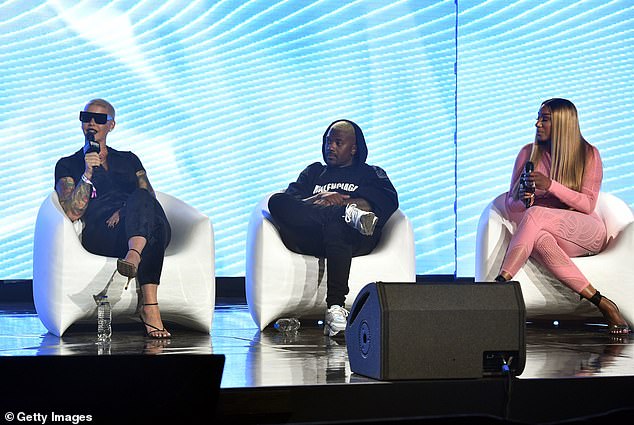 With friends: Leakes added a pop of color to the panel while onstage with her pals Ray J, seated next to Nene in the middle, and Amber Rose, pictured on the far left

The occasional actress and Celebrity Apprentice alum started dating her new man after the two were introduced by their mutual friend Peter Thomas. Thomas is the ex-husband of former RHOA star Cynthia Bailey. A fashion designer based in Charlotte, North Carolina, Nyonisela owns a menswear brand called Nyoni Couture and sells a wide variety of custom suits, shirts, tuxedos, shoes and accessories.

The fashionable pair appear to be going strong as Leakes posted a loving tribute to the dapper Nyonisela on Instagram last month. She captioned her montage of cute pictures with a heart eyes emoji and the shoutout: ‘I just wanna smile #Neyoni.’

Born in Liberia, the fashion designer gave an interview back in 2020 to a Ghanian news outlet, DailyGuide Network, explaining that his fashion influences are inspired by his ‘African heritage fused with Western styles.’ He went on to describe himself as a ‘…very passionate individual.’ 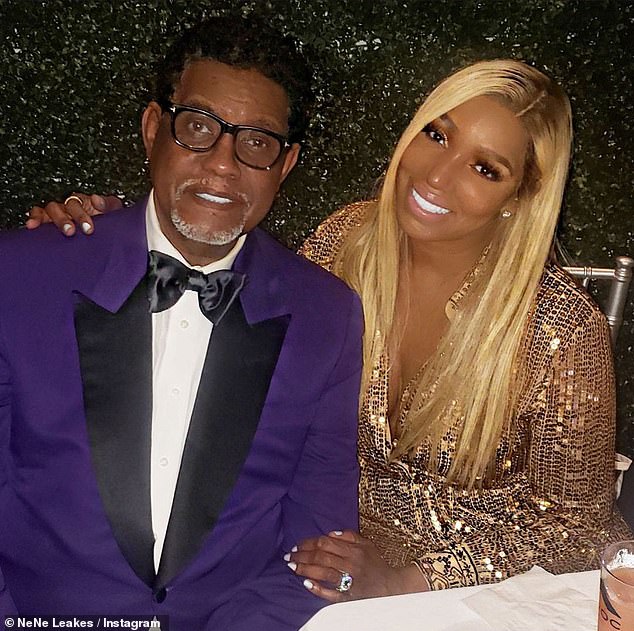 Her late husband: Here she had the ring on when she was seen with her late husband Gregg; he died in 2021 at the age of 66 from cancer

The father of three has been married once before, with his estranged wife suing Leakes over the summer. Malomine Tehmeh-Sioh filed a lawsuit against Nene alleging that she broke up their marriage by being intimate with Neyoni while he was still in a relationship with Malomine.

In the documents, Tehmeh-Sioh accuses Leakes of causing her emotional distress by posting numerous pictures of Sioh on social media. Malomine is seeking over $100,000 in damages for the destruction of her marriage.

This past year has been a dramatic and emotional time for the former peach holder, but Nene proved that things were looking up with her vibrant appearance on the Revolt Summit’s stage at 787 Windsor. ‘@NeNeLeakes IS THE QUEEN OF REALITY TV’ she recently trumpeted on Twitter. Perhaps this next year will be the ultimate test to see if Nene can hold on to her crown.