Christopher Lythgoe, 31, is accused of inciting others to kill Rosie Cooper, who has represented West Lancashire since 2005

The alleged leader of right-wing terror group National Action has appeared in court accused of giving the green light for the machete murder of Labour MP Rosie Cooper.

Warehouse worker Christopher Lythgoe, 31, is charged with granting a fellow member of the banned group permission to carry out the attack on July 1 this year.

A 22-year-old man from Lancashire, who cannot be named for legal reasons, is charged with intending to commit acts of terrorism contrary to Section 5 of the Terrorism Act 2006.

The charge states that he bought a ‘Gladius Machete’ for the purpose of murdering West Lancashire MP Ms Cooper between June 5 and July 3 this year.

He is also accused of making threats to kill a female police officer on July 1.

Lythgoe, of Warrington, Cheshire, is charged with encouraging the 22-year-old to commit murder and both men are also charged with being members of National Action.

They appeared in the dock at Westminster Magistrates’ Court in London on Friday alongside four other alleged members of the banned group.

The six men are accused of continuing to be members of National Action after the group was banned under UK law on December 16 last year until their arrest on September 27 this year.

They spoke to confirm their names, dates of birth and ages.

During the hearing, Helm asked: ‘Am I allowed to speak?’ before he was approached by his lawyer.

Chief Magistrate Emma Arbuthnot remanded them in custody before a pre-trial hearing at the Old Bailey on Friday November 3. 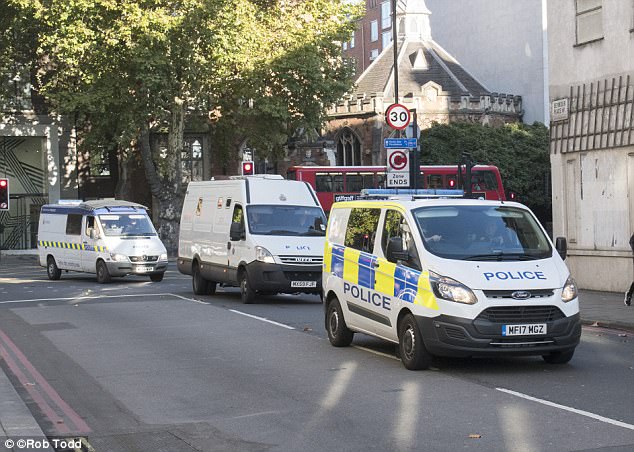 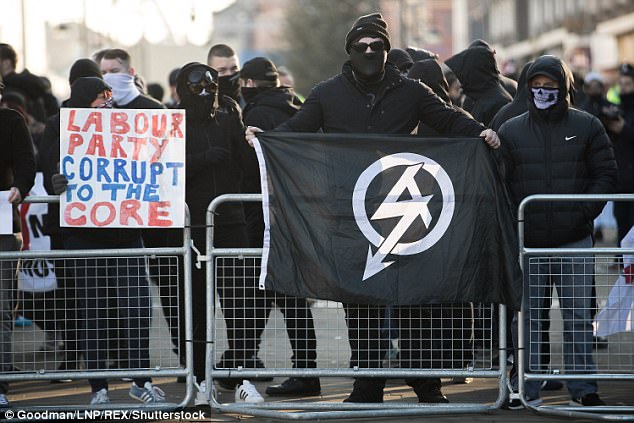 A leader of the banned neo-Nazi terror group National Action has been charged with encouragement to commit murder (file photo of National Action’s demonstration in Bolton on November 26, 2016)

Miss Cooper, 67, was born in Liverpool to deaf parents.

She is a former Lord Mayor of the city, where she was a Liberal Democrat councillor for more than 25 years.

She switched to Labour in 2000 and was elected to the Commons 12 years ago. She is a member of the Health Select Committee.

In a statement, she said: ‘I would like to thank everyone involved in this case, especially the counter-terrorism police, for keeping me, my staff and the public safe.’

A spokeswoman for Greater Manchester Police said: ‘A group of men have been charged as part of a national investigation into the group National Action.

‘On Wednesday September 27, as part of co-ordinated activity, officers from Counter Terrorism Policing North East and North West, supported by Wales Extremism and Counter Terrorism Unit and Wiltshire Police, executed a number of warrants and searched properties across England and Wales.’

National Action, which glorified the murder of Labour MP Jo Cox last year, has been described by the Home Office as ‘virulently racist, anti-Semitic and homophobic’.

It became the first far-Right group to be banned under terrorism laws in December 2016.

The British neo-Nazi organisation was proscribed under powers outlawing the glorification of terrorism – meaning it is a crime, punishable by a maximum of ten years in prison, to be a member or supporter of the group.

Its supporters applauded the murder of 41-year-old Mrs Cox in June last year.

The group has previously hosted a ‘Miss Hitler’ contest and posted pictures online of supporters performing Nazi salutes at the Buchenwald concentration camp in Germany, where 50,000 prisoners perished during the Second World War.

In February, three months after National Action was banned, anti-extremist campaign group Hope Not Hate reported that it was continuing to operate ‘in all but name and poses a serious terrorist threat’.

The charity said National Action was actively recruiting and training from a converted warehouse it had rented in Warrington, Cheshire.

WHO ARE NATIONAL ACTION?

National Action was the first far-Right group to be banned by the Government under a crackdown on extremists in December 2016.

National Action championed Thomas Mair, 54, the white supremacist who received a whole-life sentence for the murder of Labour MP Jo Cox in June 2016.

Mair shouted ‘Britain first’ as he shot and stabbed the mother of two many times outside her constituency surgery in Birstall, West Yorkshire.

After the killing, National Action posted vile messages including, ‘Our thoughts go out to Thomas Mair’ and ‘Don’t let this man’s sacrifice go in vain. Jo Cox would have filled Yorkshire with more sub-humans.’ Another read: ‘Only 649 MPs to go.’

Speaking at the time, Miss Rudd said: ‘National Action stirs up hatred, glorifies violence and promotes a vile ideology, and I will not stand for it.

‘It has absolutely no place in a Britain that works for everyone.’

An entry for National Action in the official list of proscribed groups says it is a ‘racist neo-Nazi group’ that was established in 2013 and has branches across the UK which ‘conduct provocative street demonstrations and stunts aimed at intimidating local communities’.

The document adds that the group is ‘virulently racist, anti-Semitic and homophobic’ and promotes the idea that Britain will ‘inevitably see a violent race war’.

The organisation ‘seeks to divide society by implicitly endorsing violence against ethnic minorities and race traitors’. Its website also carried images celebrating the terrorist attack on a gay nightclub in Orlando in which 49 revellers were murdered and another depicting a policeman’s throat being slit.

The Home Office said: ‘The images can reasonably be taken as inferring that these acts should be emulated and therefore amount to the unlawful glorification of terrorism.’