Netflix drama linked to rise in searches about suicide

Charities have accused the makers of 13 Reasons Why, which charts the suicide of teen Hannah Baker, of ‘romanticising’ the act

The Netflix teen drama 13 Reasons Why has been linked it to a jump in Google searches about suicide.

The series centred on a 17-year-old girl who kills herself, and leaves a series of cassette tapes addressed to her classmates telling them about the part they played in her decision.

Charities have already accused Netflix of ‘romanticising’ suicide, and warned that the US video streaming service could end up with blood on its hands because of the programme.

And now mental health scientists have uncovered new evidence that will only reinforce those fears.

Dr Thomas Niederkrotenthaler, at the Medical University of Vienna, Austria, said that Google searches for suicide rose after 13 Reasons Why was released – a potential indication that more people were thinking about killing themselves.

He said it was impossible to say whether the people searching for suicide went on to harm themselves, but drew parallels with a German television programme which aired in the 1980s.

That show, Death of a Student, showed a 19-year-old man taking his own life on a railway. Some 62 young men and boys killed themselves in the same way in the 70 days after the series aired – nearly double the usual rate.

‘Although we cannot infer causality from this study, the identified associations are consistent with a potential Werther effect, which describes media-induced self-harm,’ Mr Niederkrotenthaler said.

Writing in the British Medical Journal, he and his colleagues have now called for a crackdown on the way that film and television companies show suicide on screen.

Production companies should undergo training about how to deal with suicide, and try and include more discussion about prevention in their storylines, he said.

Programmes should also be reviewed and tested by independent experts before being released, and must be rigorously monitored by agencies, he added.

The 13-part series, released in March, was rated 18 by the British Board of Film Classification. However, younger viewers are easily able to access the series by ticking a box confirming that they are old enough. 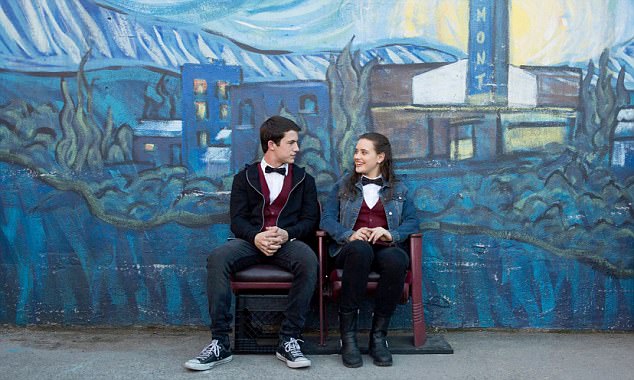 Dr Thomas Niederkrotenthaler, at the Medical University of Vienna, Austria, warned the show has caused a spike in Google searches for suicide and could prompt needless deaths

What is more, the high school setting of 13 Reasons Why makes it feel like other teen dramas targeted at children. Critics have compared it to Gossip Girl, 90’s-classic My So Called Life and Pretty Little Liars.

Even Netflix admits in its blurb: ‘After a teenage girl’s perplexing suicide, a classmate receives a series of tapes that unravel the mystery of her tragic choice.’

The teenager at the heart of the drama, Hannah Baker, sets her reasons for suicide out piece by piece, giving the drama the feel of a whodunit.

Over the course of tapes she offers a litany of ordinary teenage problems, such as feeling left out, falling out with friends, being objectified by boys in her class, and branded a ‘slut’ for getting physically involved with the wrong person.

Critics of the series have been unsparing in their condemnation.

Stephen Habgood, chairman of youth suicide charity Papyrus, said when the show was first released: ‘It is irresponsible of Netflix to put this out.

‘Those who are vulnerable will be attracted to [suicide] if you glamourise it and make it seem like it will get you attention.

‘The problem is, if suicide is portrayed in this kind of way, I think it will attract attention from young girls who are vulnerable.’

Reed Hastings, chief executive of the video streaming company, has admitted that the series is ‘incredibly controversial’ but said in February that he was ‘willing to pay that price’ for a show that would change the way people think.

The streaming giant has now commissioned a second series, following the programme’s success.

Yesterday, Netflix defended its decision to air the programme and insisted that it has had a positive impact.

A spokesman said: ‘We’ve heard from our members that 13 Reasons Why has opened up a dialogue among parents, teens, schools and mental health advocates around the intense themes and difficult topics depicted in the show.

‘We knew the material covered sensitive topics, as the book did when it was published in 2007, and we worked with mental health experts to show how these issues impact teens in real and dramatic ways.’

It added that Netflix subscribers can use parental controls to restrict access to certain programmes, and that it offers an ‘after show’, ‘Beyond the Reasons’ that examines some of the controversial topics in more detail.