Life AFTER the crown: signed, never-before-seen images of recently abdicated King Edward VIII and his wife Wallis Simpson enjoying a luxury 1938 cruise along the French Riviera are up for auction for $2,000

Never-before-seen photos of King Edward VIII and his wife, Wallis Simpson, enjoying a luxurious Mediterranean cruise in the wake of the abdication crisis have come to light. 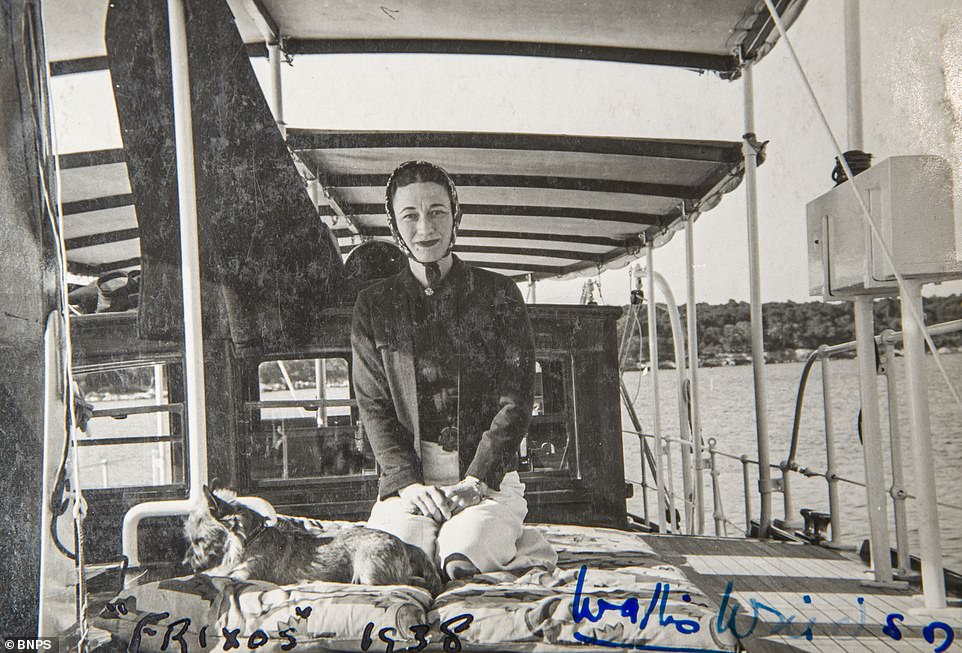 The Duke and Duchess of Windsor were guests on board a yacht belonging to Greek millionaire Nicholas Zographos, a professional gambler who made his money in the casinos of the South of France. Pictured: A signed photograph of Wallis Simpson on the yacht. 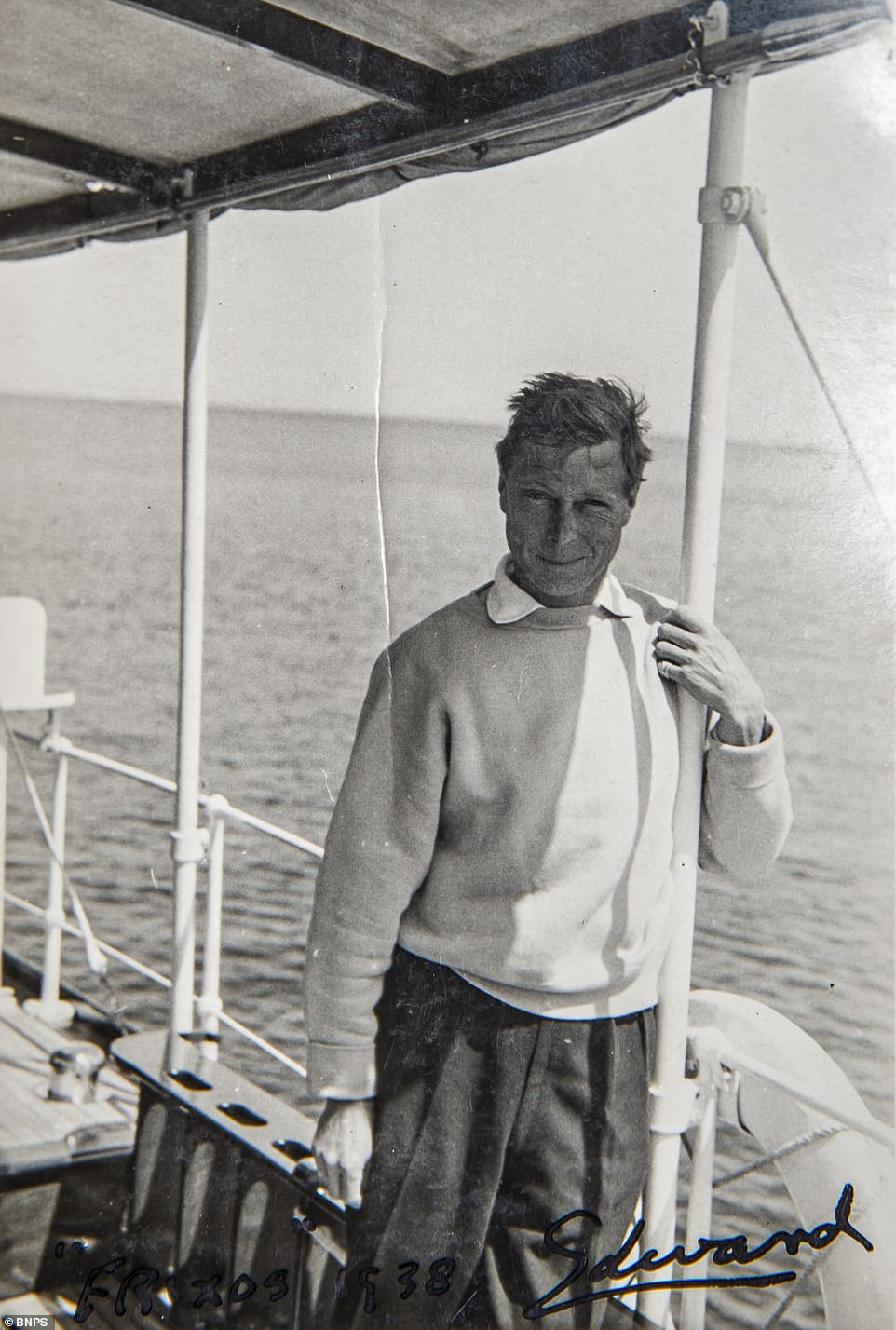 The ship’s log, which has emerged along with the black-and-white photos, charts the life of luxury the controversial couple enjoyed. It was compiled by skipper Joseph Barden, and it covered the period between February 1, 1934, to June 18, 1940. Pictured: A signed photograph of King Edward VIII on the yacht. 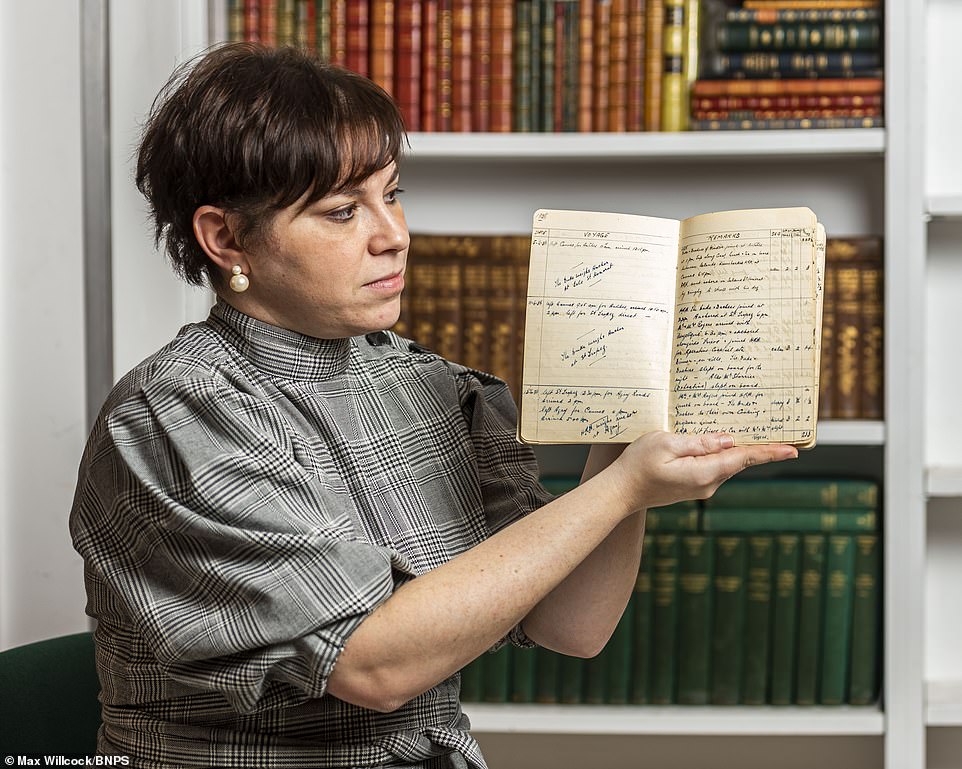 The log book has now emerged along with the pictures from Mr Barden’s granddaughter, who is selling the archive with Chiswick Auctions, west London in April. It has a pre-sale estimate of $2,000 (£1,500). Pictured: Chiswick Auctions’ Valentina Borghi with the logbook. 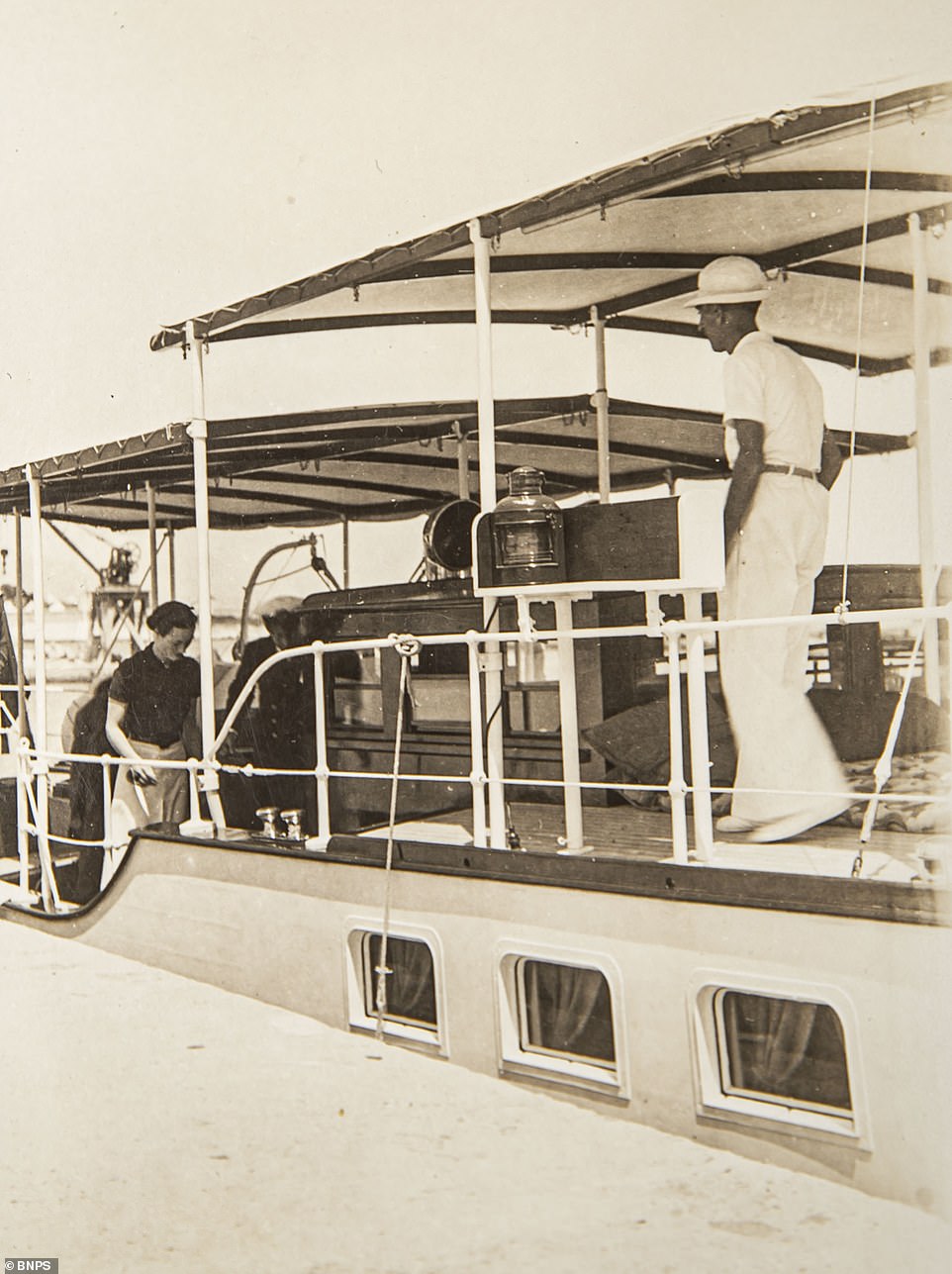 The log book details how the couple spent their days sailing around the French Riviera, often anchoring at exclusive places like Cannes, St Tropez, Monte Carlo, Antibes and the island of Sainte-Marguerite. They also welcomed friends on board the vessel, such as Herman and Katherine Rogers. Pictured: Wallis Simpson onboard Frixos. 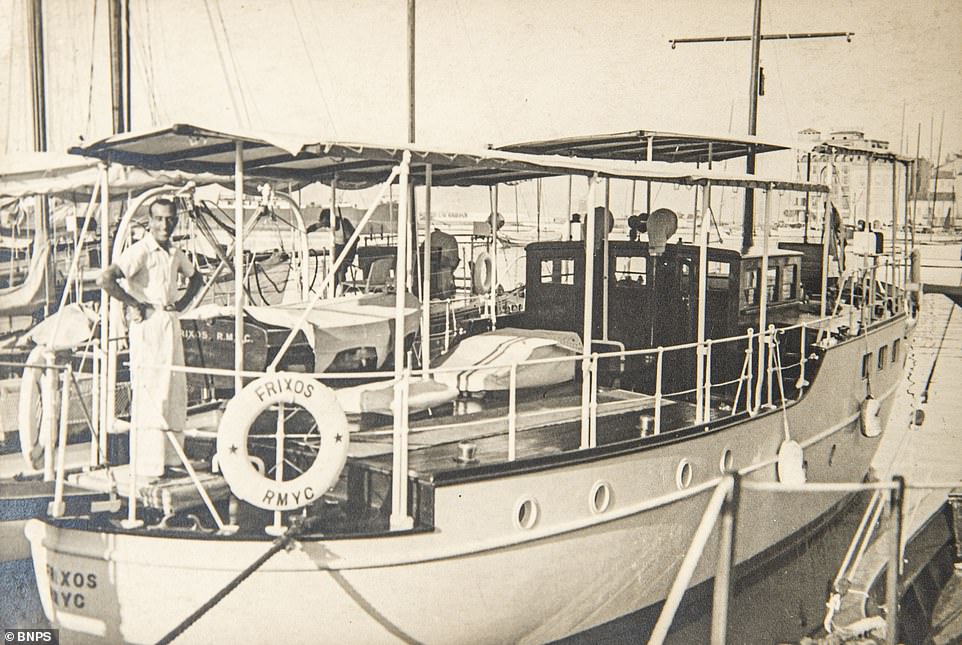 The couple owned a villa in Cannes, which is where Wallis took shelter during the abdication crisis in 1936. Pictured: Frixos yacht. 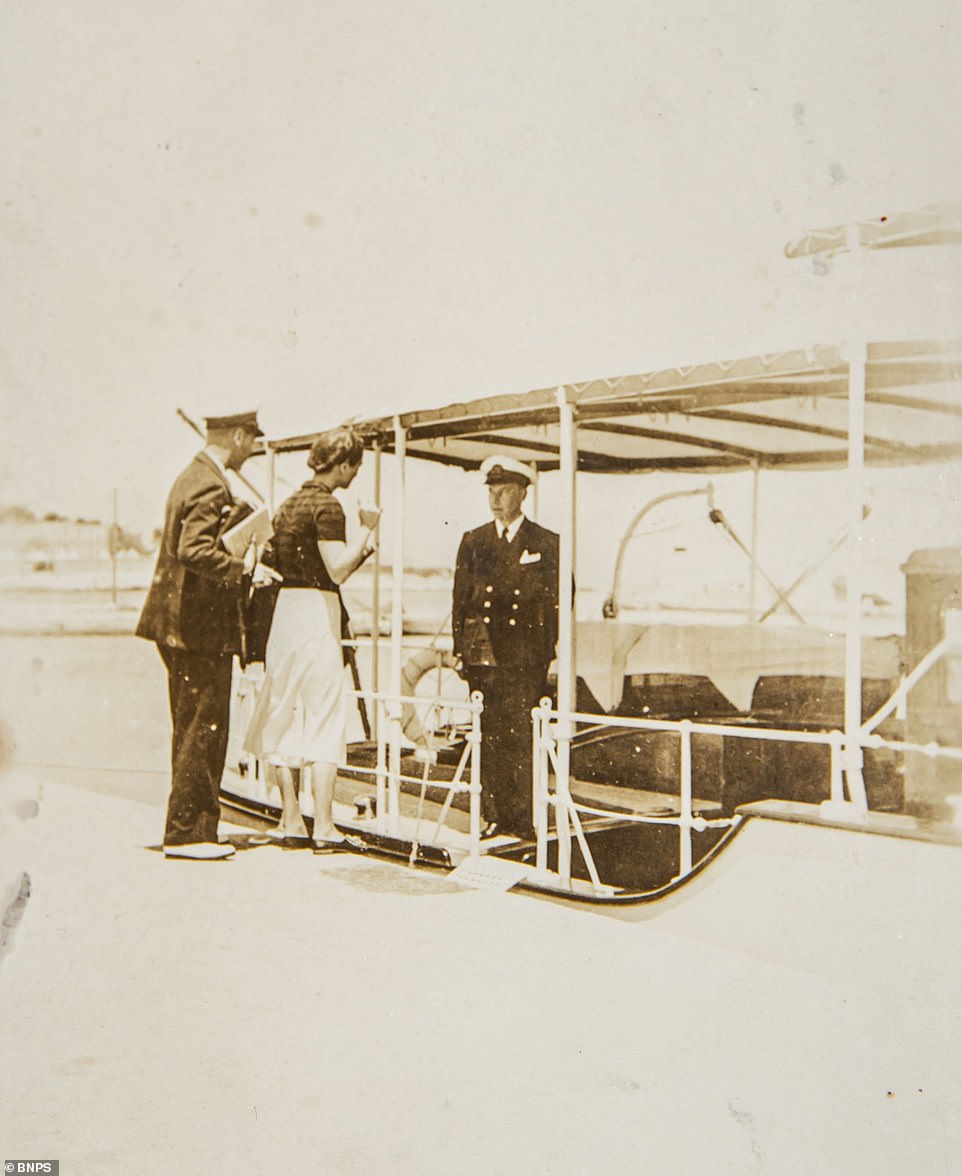 The ship’s log documents how Edward, known as David, and Wallis made lunch on board for their guests and sipped aperitifs and cocktails with them. At night, they were dropped off at Cannes to enjoy dinner and drinks in posh waterfront restaurants. Pictured: Wallis Simpson boarding Frixos. 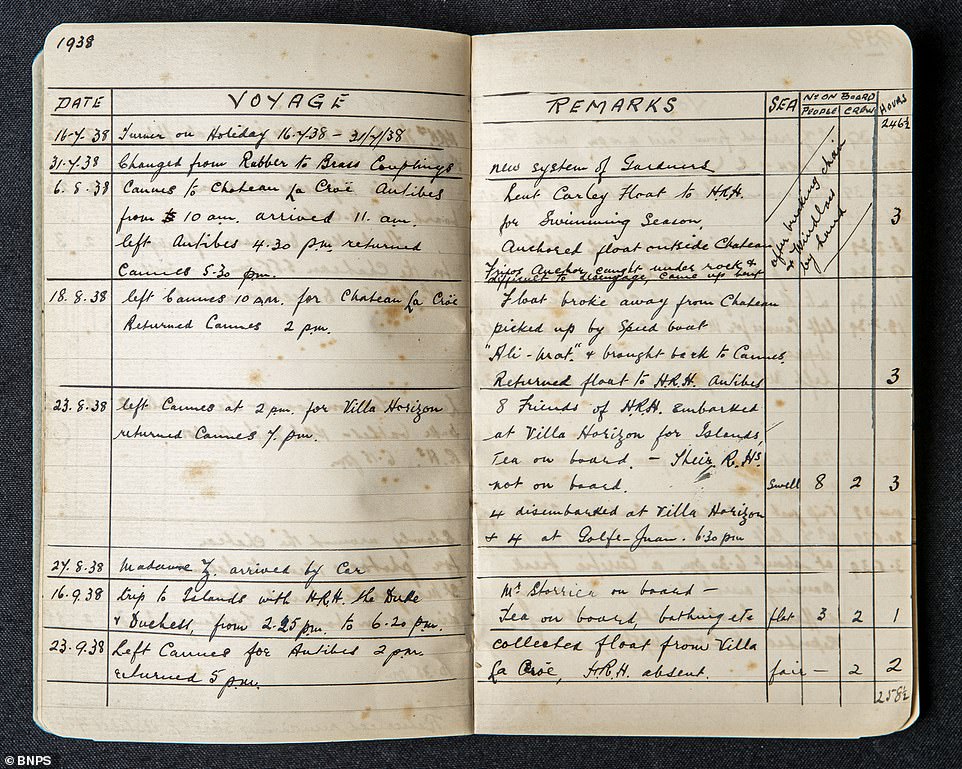 The former King also liked to walk his dog on the local sun-kissed beaches. At the same time Edward was sunning himself, his brother, King George VI, was leading his country as war with Germany loomed ever closer. Pictured: Pages from the logbook. 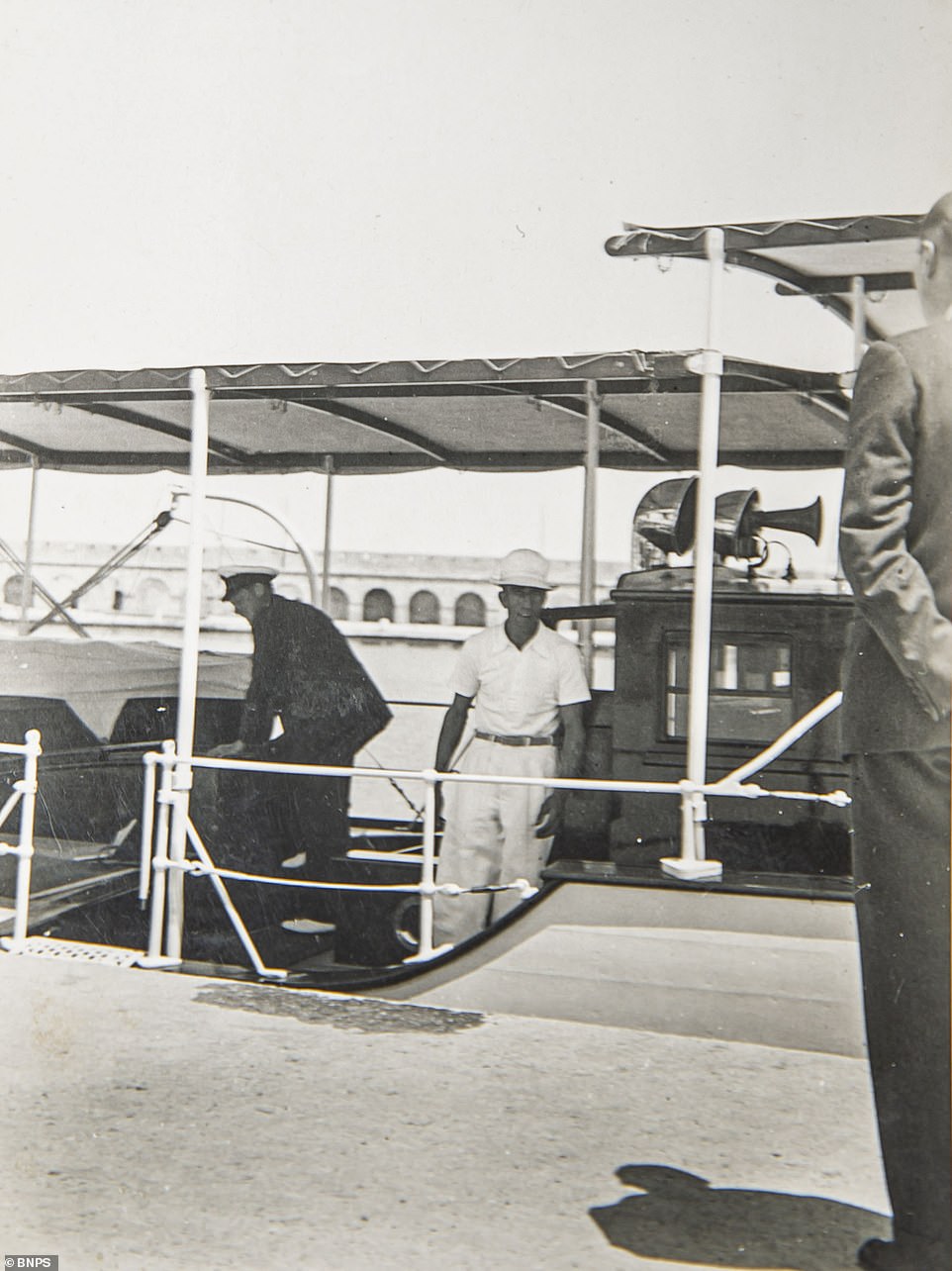 According to the log, Edward and Wallis returned for another cruise on the Frixos the following year, but it had to be cut short when he was summoned to London on the eve of war. Pictured: Crew onboard Frixos.

Valentina Borghi, of Chiswick Auctions, said: ‘The owner of the yacht was quite close to the Duke and Duchess of Windsor, and, in the summer of 1938, they boarded the yacht for a cruise around the French Riviera.’ Pictured: A logbook entry from June 12, 1938, with remarks about how ‘the Duke and Duchess do their own cooking and prepare lunch’. 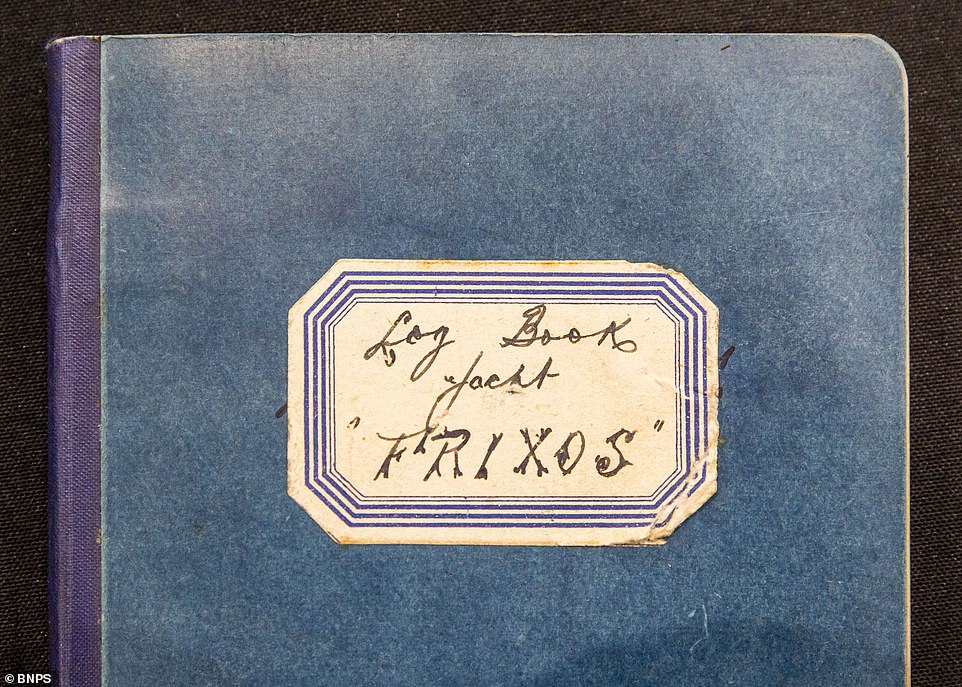 ‘The log book entries paint a picture of a very sophisticated lifestyle they enjoyed and offer a real glimpse into another era,’ Borghi added. ‘The photographs of Edward and Wallis are candid and have never been seen before. This is a unique and very exciting lot.’ Pictured: The front page the logbook. 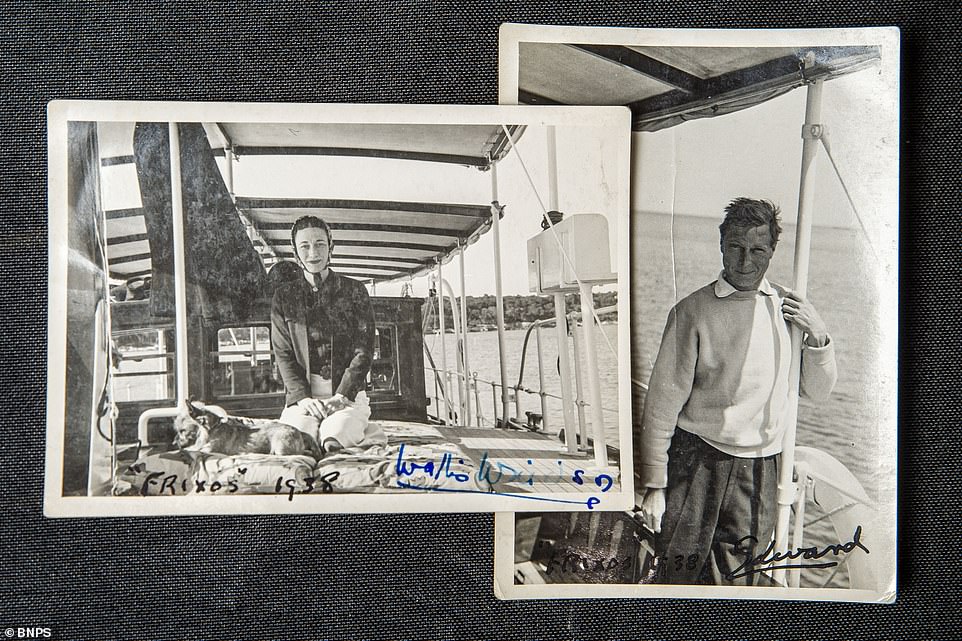 Edward and Wallis enjoyed their 44th and 42nd birthdays during the voyage on the Frixos in the summer of 1938 – just two years after the former had abdicated the throne and was succeeded by his younger brother, George VI. Pictured: Signed photographs of Wallis Simpson and King Edward VIII.