New BBC drama Press will be making its own headlines

Read all about it! New BBC drama Press showcases a ferocious battle between rival journalists that will be making its own headlines

If Doctor Foster had you gripped – and if it didn’t, were we watching the same show? – then prepare to be put through the wringer once again. Press is the new drama from writer Mike Bartlett and though he’s switched focus from medicine to journalism, Press is already looking like this autumn’s most gripping story.

Seven years ago, before Bartlett had even thought of a doctor named Foster, he wanted to write a show about newspapers.

‘I took my idea to broadcasters,’ he says. ‘And everyone said, “We’re not interested. No one cares about journalists.” ’

Ben Chaplin (left) plays Duncan Allen, the smarmy editor of The Post who’ll do whatever it takes to land that story, while David Suchet (right) plays The Post’s wealthy proprietor 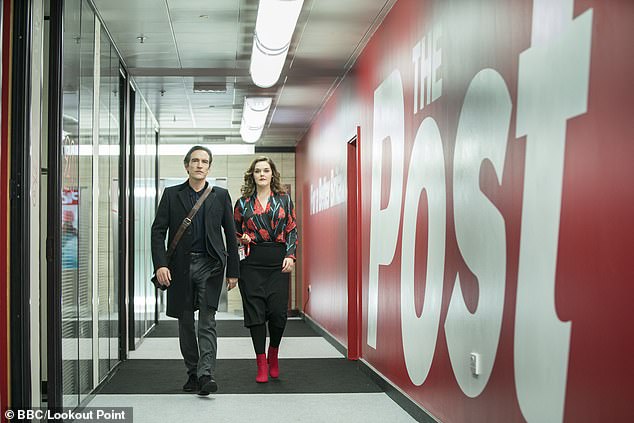 The Post is The Sun in disguise, a brash mass-market red-top. The Herald is Guardian-esque, a left-leaning broadsheet that looks down on The Post but envies its financial resources

But a lot has changed in those seven years. Bartlett has gone from an admired but little-known playwright to one of TV’s most in-demand writers, and journalism has become a hot topic. Donald Trump has introduced us to so-called fake news. Britain has had phone-hacking, the Leveson inquiry and the closure of the News Of The World. Journalism itself has become front-page news – and that’s where Press takes up the story.

It’s a tale of two newspapers. The Post is The Sun in disguise, a brash mass-market red-top. The Herald is Guardian-esque, a left-leaning broadsheet that looks down on The Post but envies its financial resources and readership figures.

Press follows journalists from both camps as they sniff for scoops, do ‘death knocks’ (trying to get the first interview from a family who’ve suffered a bereavement), pull 20-hour shifts and watch their personal lives suffer as a result. Think This Life meets State Of Play (but without the preachiness of Spielberg’s recent The Post).

Ben Chaplin (Apple Tree Yard) plays Duncan Allen, the smarmy editor of The Post who’ll do whatever it takes to land that story. ‘He’s vain and he’s got shaky principles,’ says Chaplin. ‘But it’s the number one selling paper in the country and he has huge power.’ David Suchet plays The Post’s wealthy proprietor.

Charlotte Riley (Peaky Blinders) is Holly Evans, the dour-but-dedicated news editor on The Herald. ‘She’s not immediately likeable, quite inaccessible,’ says Riley. ‘One journalist I spoke to said you do find that in quite a lot of news editors! But [my character] is brilliant at her job.’

Riley, the wife of actor Tom Hardy, says she has had experience of tabloid news-gathering tactics, but that making Press has given her greater respect for journalists.

‘It changes your perspective,’ she says. And that’s writer Mike Bartlett’s signature – remember how it was never quite certain in Doctor Foster who you were supposed to be rooting for, and that was what made it so fiendishly addictive? After all, there are always two sides to every story.