Customers are getting a shot of cannabidiol in their coffee instead of caramel at a new coffee shop with a twist.

Bogarts CBD Coffee House on a busy high street in Swansea, Wales, is one of a growing number of businesses selling the completely legal products.

CBD is a non-psychoactive cannabis plant extract which many believe can help with a variety of conditions from anxiety and depression to arthritis and fibromyalgia.

The cafe adds shots to favourites such as pumpkin spice latte, hot chocolate and camomile tea for £1 extra.

Whilst the Class B drug itself has not been recognised as having any benefits, and is still illegal to possess, government advisers at the Medicines and Healthcare Products Regulatory Agency for High-Street sale (MHRA) made it legal to buy cannabidiol (CBD) oil in 2016.

‘The coffee wakes me up but the CBD oil helps to chill me out’: Coffee shop owner, Mr Lang, is selling shots of CBD in his hot drinks

This was after they admitted that it has a ‘restoring, correcting or modifying’ effect on humans.

But The Welsh Government and the Royal Pharmaceutical Society (RPS) disagrees with evidence, and say there is no proven medical benefit.

A Welsh Government spokesperson said: ‘There is little robust evidence of any health benefits of CBD.’

‘Normally with my anxiety it’s about having quite bad repetitive thoughts, but this just slows that down. Every day before work I come in here.

‘The coffee wakes me up but the CBD oil helps to chill me out. It says to me “it’s ok, you’ve got this”. 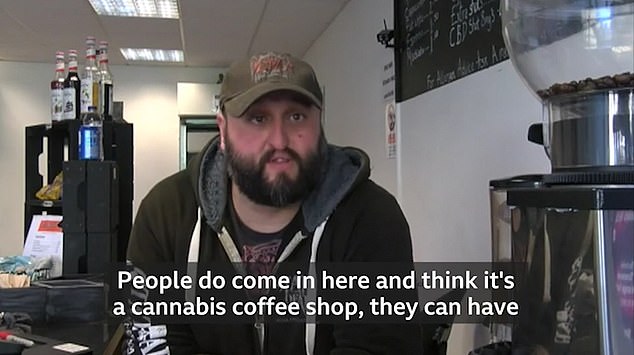 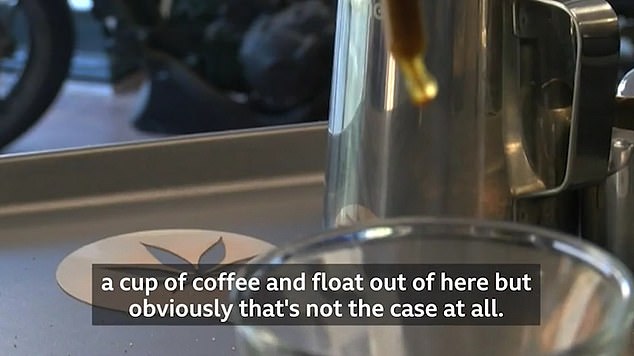 Jeff Lang, owner of Bogarts CBD Coffee House, says people think ‘they’re going to have a cup of coffee and float out of here, but obviously that’s not the case at all’. He says

‘People do come in here thinking it’s an actual cannabis coffee shop, thinking they’re going to have a cup of coffee and float out of here, but obviously that’s not the case at all,’ explained Mr Lang.

He said his customers range in age from 18 up to 80 years old, with younger customers tending to use CBD for anxiety, while older people find it helps with painful conditions affecting their mobility such as arthritis and fibromyalgia.

WHERE TO GET YOUR CBD FIX

Its having a sophisticated rebrand, as shifting attitudes started in the US.

Here, the FDA is yet to give its full approval.

But certain states, such as New York, have opened it’s first CBD cocktail bar, Adriaen Block, priced up to $15.

The Green Goddess Cafe, in Vermont, says their most popular specialty drinks is the Jamaican Me Shake, a CBD smoothie with tropical fruit, spinach, avocado, organic apple juice and whipped cream.

Young American, Chicago, which will sell CBD-infused drinks by the end of the year, aims to reflect youngsters who are  ‘brimming with energy and creativity’.

In the UK, the concept is beginning to slowly sweep the nation.

As well as coffee at Bogarts CBD Coffee House, The Brain Box Shop, in Swansea, sells hemp flowers and tea that can be used in baking, sold for around £7 to £11 a gram.

London fitness studio Frame offers the greenest smoothie out there to its clientel, claiming its anti-inflammatory properties

by. CHLOE, a trendy vegan cafe, is has created a legal ‘weed brownie’ using CBD oil its London branch.

CBD gummies, skincare, perfume and even water are available to buy online at a hefty cost.

‘I wouldn’t say it’s a meeting place for people with disorders, but people do talk about it,’ Mr Lang added.

London has also seen an increase in the cannabis-based products.

Suppliers in England and Wales have to obtain a licence to sell it as a medicine, following the decision in October two years ago.

Manufacturers are able to avoid the strict regulation by selling it as a food supplement – ignoring the lengthy process of gaining a medicinal licence.

Typically, it’s sold in the form of oils and capsules, but businesses are thriving on the idea of mixing it with food and drink.

Fitness studio Frame is offering clients cannabis-spiked smoothies after classes, and the latest offering at Behind This Wall, a bar on Mare Street, contains CBD in it’s alcohol-free mocktail alongside ginger and kombucha.

‘Personally, I feel like CBD has a relaxant effect on the body,’ founder Alex Harris, told Stylist. ‘And a lot of the time, when people crave alcohol, that’s the feeling they’re chasing. It’s a glass of red wine after work to mellow out.’

Behind This Wall’s Harris first came across mixologists experimenting with cannabis compounds while living and working in LA in 2015.

In the US, the FDA is yet to approve any CBD products apart from an epilepsy drug called Epidiolex.

However, state laws vary. New York City’s first and only CBD cocktail bar has just opened, whereas the California Department of Public Health stopped the sale of CBD additives in food and drink until it receives full FDA approval.

This year, Canada became the second country in the world to legalise the recreational use of cannabis.

Behind The Wall, a bar in London, is now selling a alcohol-free cannabis infused cocktail, telling followers on Instagram to ‘let that seep in’

In the UK, medicinal cannabis oil, which is slightly different to CBD oil, will be available on prescription in November.

From November 1, UK laws will change to allow cannabis-based products for medicinal use to be prescribed in England, Scotland and Wales, according to a written statement from the Home Secretary, Sajid Javid.

A recent opinion poll found that almost half of people support legalising the sale of cannabis through licensed shops.

Polling company ORB, which surveyed 2,000 people, found that men (53 per cent) are more likely to back licensed sales of cannabis than women (41 per cent).

WHAT IS CBD OIL AND IS IT LEGAL IN THE UK?

Government advisers made it legal to buy CBD supplements in 2016

Government advisers at the MHRA made it legal to buy cannabidiol (CBD) oil in 2016 after they admitted that it has a ‘restoring, correcting or modifying’ effect on humans.

Suppliers in England and Wales have to obtain a licence to sell it as a medicine, following the decision in October two years ago.

Manufacturers are able to avoid the strict regulation by selling it as a food supplement – ignoring the lengthy process of gaining a medicinal licence.

CBD products comes in many forms, the most popular being an oil – which users spray under their tongue – or gel tablets which melt slowly in the mouth.

Cannabis oil, which is different to CBD oil because it contains THC – the compound that gives users a ‘high’ – is illegal under UK laws.

Billy Caldwell, from Castlederg, Northern Ireland, made headlines last April when he became the first Briton to be prescribed it on the NHS.