A new batch of coronavirus patients in China are reacting differently to the coronavirus – suggesting that the pathogen may be changing.

Patients in Jilin and Heilongjiang have been carrying the virus for longer and taking more time to recover than their predecessors in Wuhan, a leading doctor said.

Qiu Haibo, who is part of a National Health Commission expert group, said the new patients were rarely showing signs of fever and were suffering damage to their lungs rather than to multiple organs.

China has discovered a new cluster of virus cases in the two north-eastern provinces in recent weeks, raising fears of a second wave.

Health workers in the province of Heilongjiang, where China has found a new cluster of virus cases, spray disinfectant over a market earlier this month

Speaking to state-run broadcaster CCTV, Haibo said the incubation period of patients in the north-east was longer than that of virus sufferers in Wuhan.

The incubation period is the time it takes for the first symptoms to appear after someone is infected with the virus.

Haibo, an expert in critical care medicine, said that the longer incubation period ’causes a problem’ because there is more time for people to pass on the virus.

‘When they gather with their families they don’t care about this issue and we see family cluster infections,’ the medic said.

Patients in the north-east also rarely exhibited fever and tended to suffer damage to the lungs rather than across multiple organs, he said.

The doctor said the virus found in Jilin and Heilongjiang was probably imported from abroad, which could explain the different symptoms.

He did not say where he thought they might have come from but both Jilin and Heilongjiang border Russia.

Researchers in the United States have found as many as 14 mutations in the crown-like spikes which give the coronavirus its name.

Scientists at the Los Alamos National Laboratory said that one of those mutations could make the virus even more infectious.

Another study by scientists at Britain’s Glasgow University looked at mutations but found they were not a sign of different virus strains.

Jonathan Stoye, head of virology at Britain’s Francis Crick Institute, has warned that the virus is a ‘moving target’.

‘The virus is evolving and is changing. And we don’t yet know what the consequences of those changes are,’ he said.

Four of the new cases were local transmissions and one was imported by a traveller coming from abroad, the health commission said in a statement.

‘The epidemic situation is now fragmented domestically, but the task of preventing a rebound of the epidemic remains arduous,’ said Zeng Yixin, a vice minister at the NHC, told a news conference on Friday. 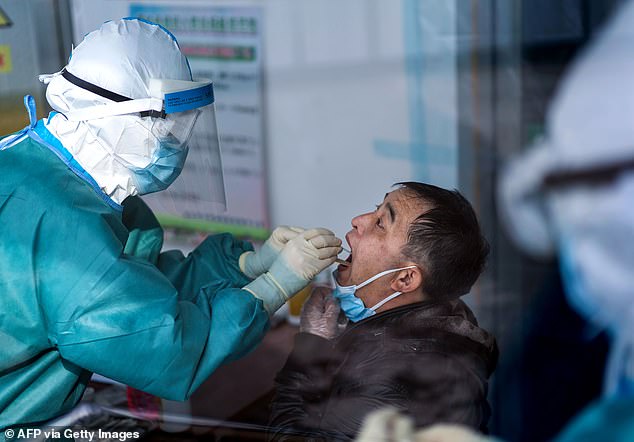 A health worker in protective gear takes a swab sample from a man in Heilongjiang, where patients are apparently responding differently from their predecessors in Wuhan

Beijing’s official figures have shown only a trickle of new cases since the initial wave of infections in Wuhan, with a total of 82,965 infections and 4,634 deaths.

However, there has been widespread scepticism about the accuracy of the regime’s figures.

China has also lobbied against an immediate inquiry into the virus, theorigins of which are still not fully clear.

Many of the earliest cases were linked to a wild animal market in Wuhan, but it is not yet known how the disease passed to humans.

Scientists suspect the virus may have originated in bats, possibly passing to humans via a third species such as pangolins.

The first case outside China was not officially confirmed until mid-January when Thailand registered its first virus patient.

However, France says it has subsequently found a positive test from December, suggesting the virus was already spreading then.

The World Health Organization said the French case was ‘not surprising’ and urged countries to investigate any other early suspicious cases.