One of the most flexible equity release deals to be launched has arrived, allowing borrowers to use their house as a cash machine – drawing out money as a monthly income.

Saga’s Regular Drawdown Lifetime Mortgage lets homeowners aged over 60 take a pre-agreed level of equity out of their home each month as cash.

The lifetime mortgage has the advantage of boosting pension income in a regular fashion, while also potentially lowering borrowing costs over time as large sums are not taken out with interest rolling up on them. But is it a good idea? We take a look.

Why offer a monthly income from your home?

Years of low interest rates, poor annuity returns  and rising inflation have had a real impact on the cost of living for those relying on pensions, savings or fixed retirement incomes.

Research from Saga claims 40 per cent of retirees end up with a smaller pension pot than expected, while a third are concerned about leaving an inheritance for their children.

What many do have, however, is a property with a sizeable amount of value tied up in it.

Equity release is a type of loan for the over-55s that allows you to release cash from your home and keep living there without having to make monthly repayments. The disadvantage is that interest rolls up on the debt over time and can take a sizeable chunk of a property’s value on death.

Initially, the main option with equity release was to take a lump sum and then put it into a savings account to draw regular payments. This was developed into drawdown products that allowed multiple smaller lump sums to be taken.

Following feedback from customers, Saga has now taken things even further, launching a lifetime mortgage product that enables people to take a regular tax-free payment from their property.

The Saga Regular Drawdown Lifetime Mortgage is the first of its kind on the market and allows people to set how much money they would like to receive each month, with a minimum of £200.

Alex Edmans, of Saga Money said: ‘Our customers have consistently told us that they want a solution that enables them to stay in the home they love, but to use it as a way of generating additional monthly money.

‘For many that means they can pay their bills or financially support their children, whilst others can go out and socialise with friends a little more often or treat themselves occasionally.’ 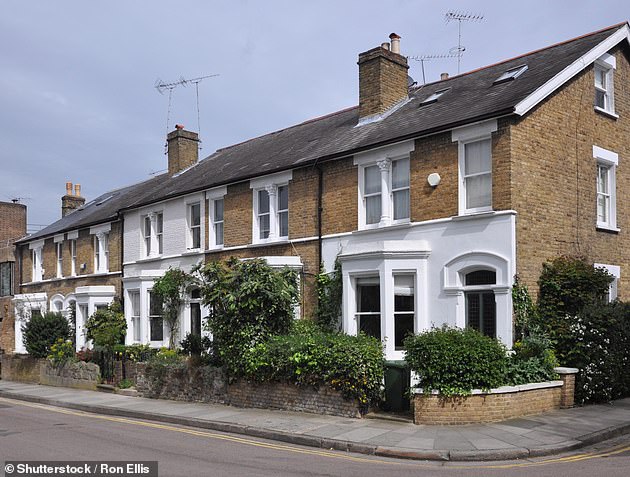 How does this work?

The Saga Regular Drawdown Lifetime Mortgage is available to people aged 60 to 80, at the start of their loan, with a UK property worth at least £150,000. People must take an initial lump sum of £10,000, and then take out a regular monthly payment set at a minimum of £200.

There are no fees for advice, valuation or set up, and interest on upcoming payouts is reviewed each year.

There is the option to change the monthly payment and release a further lump sum annually, with monthly payouts available for a minimum of five years and a maximum of 18 years, depending on your age.

The deal is also no negative equity guaranteed, meaning the loan will never be worth more than the value of your home.

What are the catches?

Lifetime mortgages, a form of equity release available only to those over 55, allow you to release cash from your property and keep living there without having to make monthly repayments.

FIND OUT ABOUT EQUITY RELEASE

This is Money has partnered with Key, a firm of independent advisers who specialise in finding retirement mortgages and equity release that work for you.

You can also download a free 32-page guide to equity release.

Instead, the loan is repaid when you die or are taken into care and the house is sold.

However, as there are no monthly payments, interest charges compound over the years and can eat into your equity significantly, leaving little to pay for care in later life or to pass on to children.

Within the equity release market, there are some deals which offer you the option of taking parts of the loan at different times, known as drawdown equity release.

By picking this type of deal over a traditional lifetime mortgage, you would take out a lower initial release, resulting in less interest over the long term.

What Saga is offering with its Regular Drawdown Lifetime Mortgage is a form of drawdown equity release.

The interest still compounds, however, so you will still end up paying a hefty sum.

To its credit, Saga offers customers a free full financial review when signing up to make sure they are aware of all their options.

‘We also encourage them to get family members involved in the decision where appropriate to ensure that everyone is happy with it,’ said Edmans.

‘I’m pleased to say in many cases our review service has helped past customers to find other options that might better suit them, however for those who would like to pursue equity release, they can do so with confidence.’ 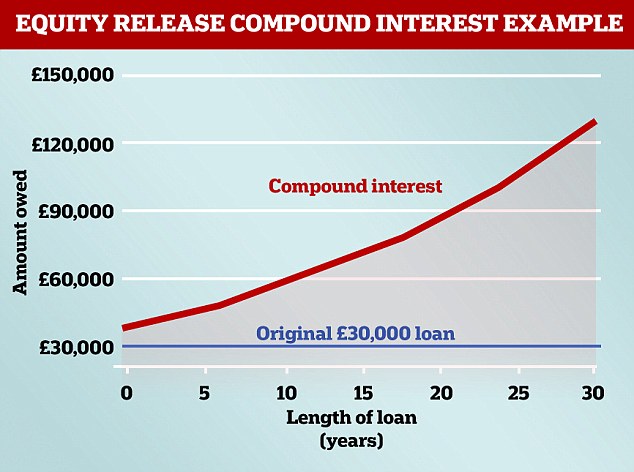 Source: This is Money /  Aviva

The FCA, Britain’s financial watchdog, defines the new wave of retirement mortgages as ‘interest-only mortgages for older consumers where, assuming there is no default, the loan is only repaid on a specified life event, usually the customer’s death or move into residential care’.

Customers must still be able to afford the ongoing interest payments, but ultimately the loan is repaid through the sale of the property.

A lifetime mortgage on the other hand is a form of equity release.

Borrowers choosing this option can opt either to pay interest monthly for as long as they wish and then switch to a roll-up plan, or go straight to rolling interest up.

The advantage of roll-up is that there are no monthly payments, so it can be an option for borrowers with low incomes.

The disadvantage is that interest charges compound over the years which can eat into homeowners’ equity significantly, leaving little to pay for care in later life or to pass on to children.

Equity release rates are also higher than standard mortgage rates as they factor in longevity risk – how long you’re likely to live before the lender gets their money back.

By comparison, Legal & General’s drawdown product, the Premier Flexible Lifetime Mortgage, is at 3.50 per cent and is available from 55 years old. There are no fees, and the drawdown can be requested by the homeowner at any point, with the minimum amount that can be taken being £2000.

More 2 Life also has a cheaper deal, with its Flexi Choice Drawdown Lite deal also available from 55 years old, fixed at 3.63 per cent, also with a no fee option. There is no limit on the number of drawdowns you can release – the only restriction is that no drawdown can be released in the same calendar year in which a partial repayment has been made.

There is also another type of deal emerging where the loan is only repaid when the borrower goes into care or dies, known as retirement interest only mortgages.

With these deals interest is paid each month, so it doesn’t compound.

This means that retirement interest-only mortgages can be significantly cheaper over the long run than taking a lifetime mortgage and allowing the interest to roll up.

Mansfield Building Society recently released a retirement interest-only mortgage with an added drawdown option, with a 2.99 per cent variable rate, £199 application fee and a £800 completion fee, up to a maximum of 40 per cent loan-to-value.

Will Hale, chief executive of equity release adviser Key said: ‘For a homeowner aged over-60 on a relatively modest income, this option may well be suitable but it is crucial that they receive specialist advice as regular payments from a plan such as this are identified as income for benefits purposes.

‘Lump sums and income are treated differently for benefit assessments so those in receipt of Pension Credit and Council Tax support may find choosing this option impacts on what they receive.’

Is this a deal worth taking?

People often take out equity release to boost their standard of living, fund home improvements, clear outstanding debts, go on holiday, or give the money to close family or friends.

But despite coming down over recent years, equity release rates are still between 3.6 per cent and 6 per cent. Saga’s new deal, at 5.65 per cent, is at the pricier end of the spectrum.

And as interest on upcoming payouts is reviewed each year, you really have no idea what you may be paying down the line.

Retirement interest only mortgage rates are generally lower, and because you are paying off the interest it’s going to be a significantly cheaper option over the long-term while allowing you to protect the equity in your home.

For this reason people may prefer these products to equity release. Although there aren’t many of them around yet, more are being launched and this is an option worth exploring.