Ford Motor Co has released more information and images on the 2021 F-150’s long-awaited airline-style sleeper seat that reclines all the way back, allowing customers to sleep in their trucks.

The automobile company first revealed details of the new ‘Max Recline’ front seats in June but eager buyers have been left waiting for a first glimpse of the feature that can transform their vehicle into their bedroom.

Available from this month, the latest generation of Ford’s brawny F-150 pickup truck also comes with the option to fold the main console into a desk – converting the driver’s seat into an office – as well a tailgate work surface and zone lighting. 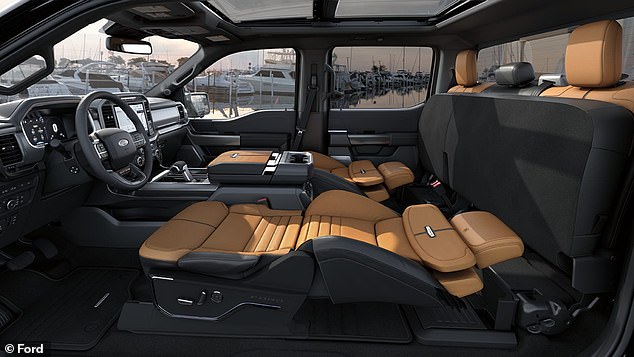 Ford has released more information and images on the 2021 F-150’s long-awaited airline-style sleeper seat that reclines all the way back, allowing customers to sleep in their trucks 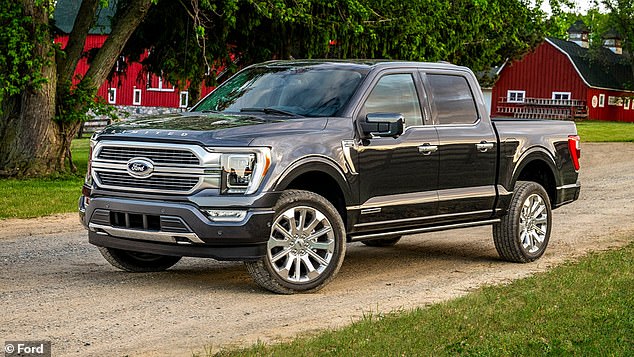 Ford claims that the new reclining front seats will provide ‘business-class comfort’ for owners looking to grab a rest during a long workday.

‘More and more people spending time in their cars when they’re not driving, it’s happening all the time, and people taking lunch breaks and a lot of night workers use an F-150 so this is a chance to relax  and catch up on sleep if you need to,’ Ford COO Jim Farley told Fox.

‘So many of our customers actually sleep in their trucks,’ added Jackie DeMarco, North American truck director at Ford.

‘You’re at the job site early in the morning and you’re working all day but during some idle time, you might want to catch a nap.

‘Or we have customers who play hard too. You arrive at a campsite late and rather than having to set up camp, you can really just recline your seat and settle in for the night.

‘Often for me, it was when I was picking up my kids from different activities or so on.’

However, the front seats don’t simply fold back. As they approach the horizontal position, the seat bottom lifts 3.5 inches to fill in the gap that would be created by a simple recline.

‘We thought about trying to make the seat fold flat and what we found was when you do that, it still wasn’t comfortable, there was this gap between the seat cushion and the seat back and it just wasn’t a comfortable position,’ DeMarco explained.

‘You needed to do more than just make the seat fold flat.’

She said that the Ford team worked on ensuring that gap was taken out and that the upper part of the seatback can also be extended to act as a neck support to make it as comfortable as possible.

‘The team really went to work on how they could actually raise the lower portion and fill that gap in as well as around the shoulder area to the headrest to be able to close that gap,’ she said.

‘When you fold flat it’s really like a first-class experience on one of the better airlines where you have a comfortable position.

‘I think it’s just a great feature. Our customers, they work hard, they play hard, and sometimes they’re tired and they need a nap.’

However, while the feature offers high-level comfort, it also comes at a high-level price.

The company is currently only making it available on the King Ranch, Platinum and Limited models, the lowest-priced of those going for $58,365.

Ford has not yet said if the reclining seats will be made available on the cheaper models in the future.

The seat bottom lifts 3.5 inches to fill in the gap that would be created by a simple recline 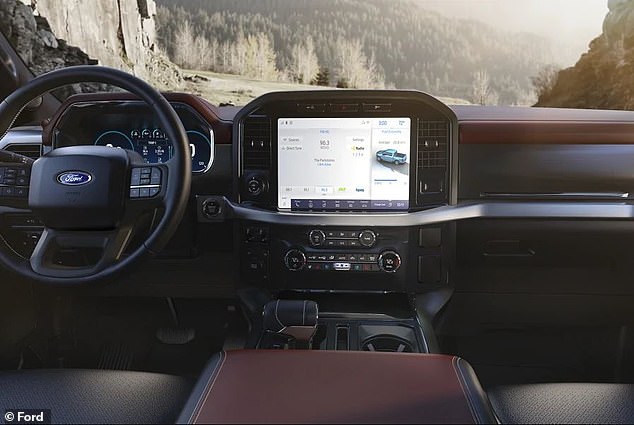 Another interesting feature with the interior seating in the 2021 F-150 is the new ability to transform the driver’s seat into an office chair, with a fold-down gear level and 12-inch touchscreen in the dashboard allowing for a workspace to be created between the front seats.

‘We also have a total mobile office so everything can fold flat to general console including the shift knob, the center console flips down, and you can do complete office work,’ Farley said.

‘This is something we’ve been seeing for a long time, more and more people using their car as a home office.’

And there’s further multi-functional workspace at the tailgate with tie-down cleats, clamp pockets and places to put pencils, pens, tablets and trays.

The vehicle can even power a worksite or a campsite with a built-in generator for up to three and a half days on a single tank of gas, and exterior zone lighting allows for set up.

Ford says the generator can choose between one of three outputs and power everything from an arc welder to an electric grill to a 70-inch TV. 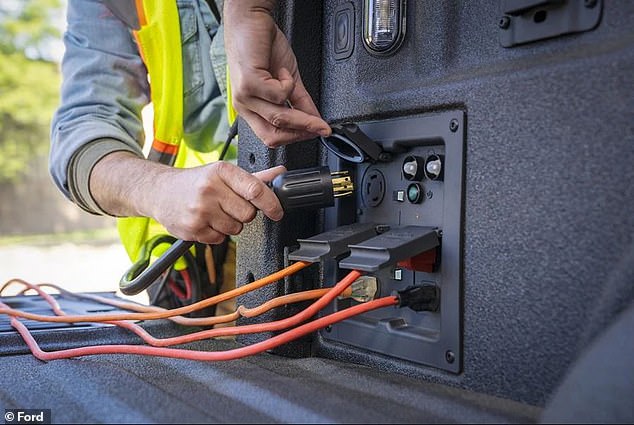 Work tools and camping supplies can all be securely locked in a full-width bin that comes under the rear interior seat.

And of course, the new F-150 comes with the new drive assist with allows drivers to go hands-free for over 100,000 miles of mapped roads across the United States.

Under the dashboard, the 2021 edition of the classic truck is powered with six engines, with a full-hybrid engine available.

Earlier this year, it was revealed that Ford, the No. 2 U.S. automaker, is counting on the 2021 14th generation of the F-150 to help pay off coronavirus-related debts.

The over-the-air software eradicates the needs for the vehicles to be brought to a dealership to update key modules controlling the vehicle as it can now be done with wireless technology.

It is expected to bring the technology squarely into the mainstream.

‘It’s really about technology and productivity,’ Farley said at a Deutsche Bank conference on June 10, according to Reuters.

The new F-150, part of the best-selling vehicle line in the United States for the past 40 years, accounts for $50 billion in annual revenue and a significant share of Ford’s annual profit.

The new truck is a critical plank in Farley’s plan to slash $5 billion in warranty costs, speed Ford’s push into vehicle connectivity and add the automaker’s already-strong position in the North American commercial vehicle market.

Ford has borrowed more than $20 billion to ride out the economic shock from the coronavirus pandemic.

Profit from the new F-150 will be key to paying that money back.

Sales of the current version have remained strong despite its age, and the new model could help Ford hold or even build its position in the segment, said Sandy Munro, chief executive of Michigan-based consulting firm Munro & Associates.