NO cap on immigration numbers after Brexit: EU workers will STILL be allowed to come looking for work in the UK until at least 2025 under new border rules as Javid refuses to back May’s 100,000 target

There will be no cap on short term workers coming to the UK until at least 2025, new immigration proposals out today reveal.

The plans include a five-year scheme that will mean anyone from the EU will be able to come to the UK to look for work for years after Brexit.

Unlike today the workers will need a visa in advance and will only be allowed to stay for a year because EU free movement is being axed. They will also not be allowed to bring family members or claim benefits.

But the system means net migration to the UK might not fall and could even increase in the years after Brexit despite a decade of Tory promises to bring numbers down.

Home Secretary Sajid Javid unveiled the proposals today more than a year after they were first due.

In a swipe at Theresa May he refused to back the long-standing target of getting net immigration down to the tens of thousands.

There will be no cap on short term workers coming to the UK until at least 2025, new immigration proposals unveiled by Sajid Javid (pictured in the Commons today) reveal

Mr Javid’s plans set out the creation of a skills-based system which treats EU nationals in the same way as people from the rest of the world if they want to settle permanently.

There will be no cap on the number of highly skilled workers who can come to do jobs like being doctors or engineers.

Other skilled workers will be allowed to come but will have to meet tough income requirements.

A proposed threshold of £30,000 triggered a major row today as business groups and the NHS said it was disqualify too many people in professions such as nursing.

The rule has been sent out for further consultation after the issue also caused deep divides inside Government. Chancellor Philip Hammond and Business Secretary Greg Clark said it should be stripped from the plans.

There will be no way for low skilled workers to come to the UK for long term jobs under the new system.

Even as late as yesterday evening, it was unclear if the document would be unveiled as ministers struggled to resolve heated disagreements. As part of the blueprint:

As he unveiled the plans this morning, Mr Javid effectively axed the ‘tens of thousands’ promise on immigration as he unveiled long-delayed reforms to border rules.

The Home Secretary refused seven times to repeat the target in an extraordinary interview this morning – and confirmed it does not feature in post-Brexit plans due to be published later.

Instead he insisted the goal is to achieve ‘sustainable’ levels of immigration.

The shift will be seen as a fresh blow to the authority of the PM, as she struggles to cling on amid a storm over her Brexit deal.

Mrs May has been a champion of the Tory target for bringing net annual immigration below 100,000, which was first declared a decade ago when David Cameron was leader.

But they have never come to close to meeting the aim. In the most recent figures, net arrivals were running at 273,000 a year.

Mr Javid  said: ‘There is no specific target. It will be a system that will bring net migration down to more sustainable levels,’ he said.

‘If you look at the current level of migration, the latest stats show 273,000. Most people agree that is very high, certainly by historical standards.

‘In the last two decades it has been in the hundreds of thousands. If you go back further than that it was much lower.

‘What we want to do is bring it to a level where it is sustainable, in the sense that it meets first our economic need and at the same time, though, it is not too high a burden on our communities or on our infrastructure.’ 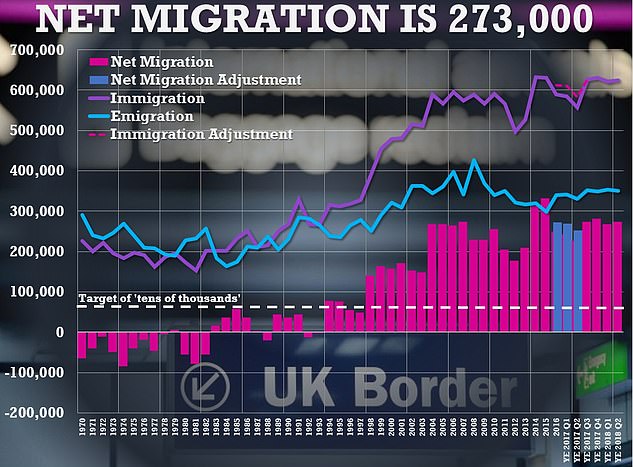 Net immigration to Britain rose to 273,000 in the first half of 2018 despite a continued fall in arrivals from the EU according to ONS data out today (pictured).

The Immigration and Social Security Co-ordination (EU Withdrawal) Bill will crack down on welfare payments claimed by EU workers arriving after the end of December 2021.

Official data from before the 2016 Brexit referendum showed that EU workers received more than £2.2billion in tax credits and housing benefits, £1.1billion in out-of-work payments and £700million in child benefit.

But non-EU nationals on visas are not allowed to claim until they been given leave to remain or settlement – typically after about five years.

EU citizens and their families who are already in Britain before the transition date will still be able to claim benefits.