On Thursday the president nominated Don Willett, a Texas Supreme Court justice, to serve on the 5th Circuit Court of Appeals.

Tributes poured in, mostly on Twitter. That was the best way to make sure he saw them.

Willett, 51, is a Twitter-holic who combines the whimsy of social media with the seriousness of the law.

The Texas legislature once appointed him to be the state’s first ever ‘Twitter Laureate,’ a position with no power but which came with a tweet-length proclamation. 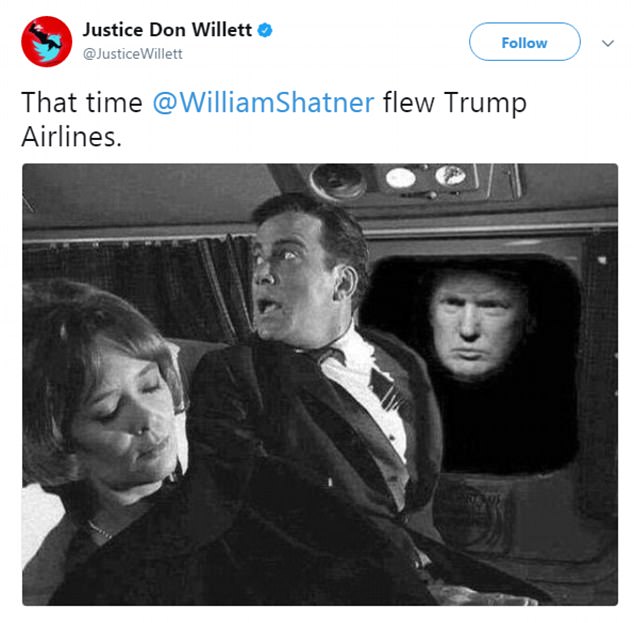 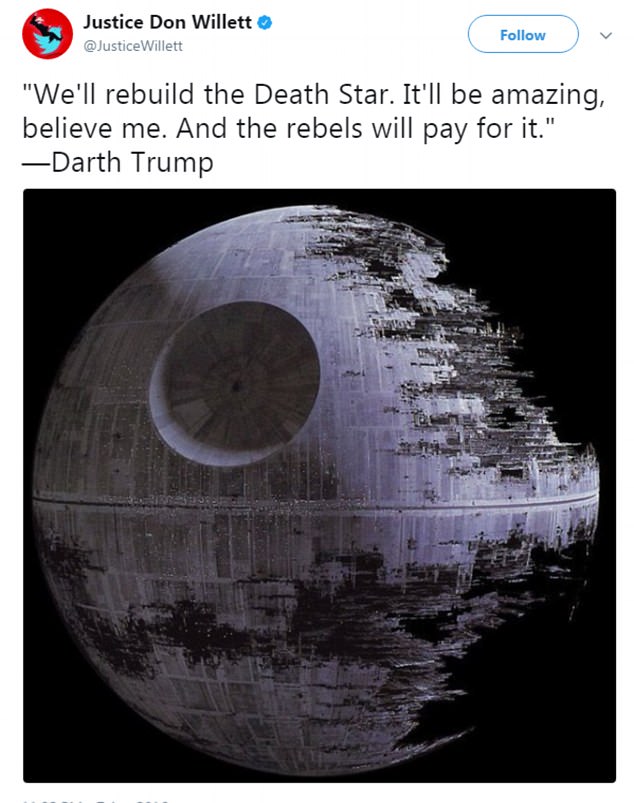 This Willett masterpiece lampooned Trump’s pledge to build a wall on the U.S.-Mexican border as a pronouncement from Darth Vader

Nearly 100,000 followers chuckle at Willett’s jokes and clever asides – and enjoyed watching him skewer an upstart billionaire presidential candidate during the 2016 election cycle.

The ribbing doesn’t seem to have hurt him.

Willett, the son of two high school dropouts, once joked that if Trump were to remove his mask the world would find out he is really Ruth Bader Ginsburg.

He tweeted a haiku reading:

‘Who would the Donald

name to #SCOTUS? The mind reels.

Another message used a Star Wars reference to mock Trump’s promise to build a wall on the Mexican border.

‘We’ll rebuild the Death Star. It’ll be amazing, believe me,’ he wrote. ‘And the rebels will pay for it.’

He even blamed Trump’s self-deprecating appearance on Saturday Night Live for the Dallas Cowboys’ slump in 2015. 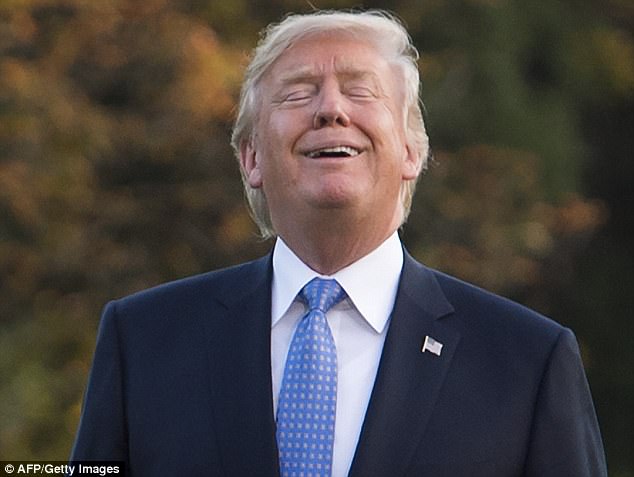 The president doesn’t seem to have been offended, judging from Thursday’s announcement; Willett also made this year’s short-list for a U.S. Supreme Court nomination 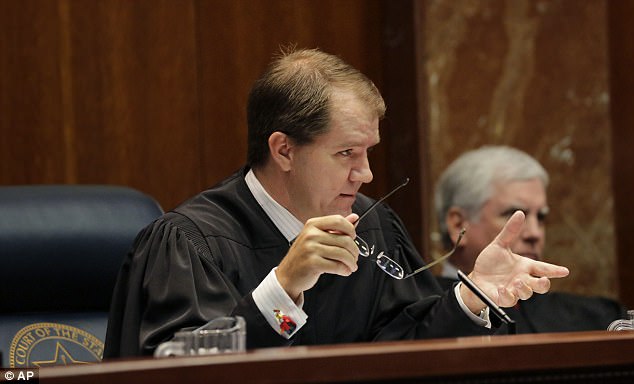 Willett was once named ‘Tweeter Laureate’ by the Texas legislature, a made-up title that came with a 140-character proclamation 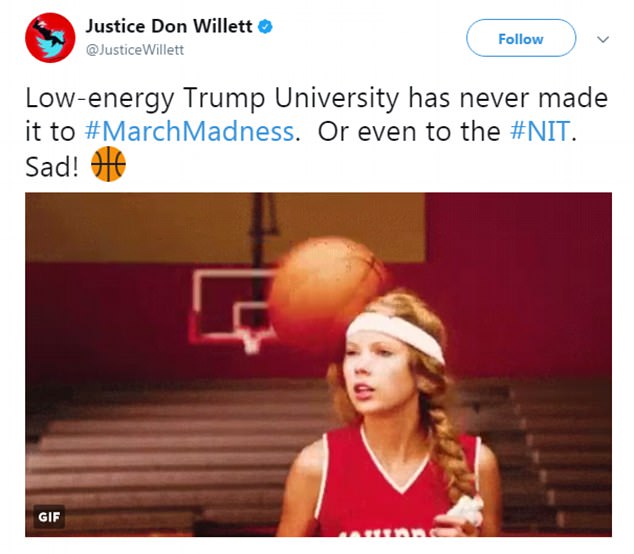 Asking his Twitter followers to suggest a mascot for Trump’s business-education experiment, he heard ideas ranging from the Monopoly game’s tycoon character to a mulleted llama 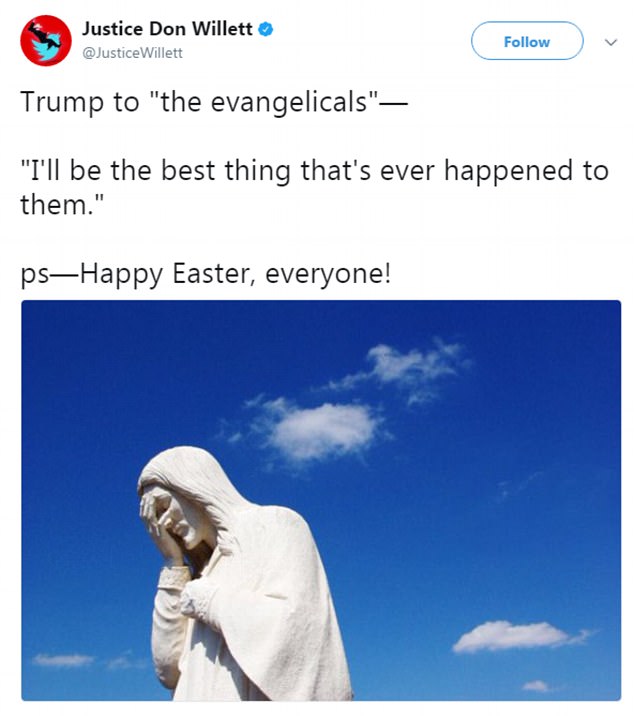 While the presidential campaign was in full swing, Willett even joked about Trump’s promise to look out for the interests of evangelical Christians

The jurist once asked his Twitter followers to come up with a school mascot for Trump University, fielding suggestions that ranged from the Monopoly game’s tycoon and Scrooge McDuck to a slice of baloney and a mulleted llama.

His own suggestion was a ‘#Tribble,’ the furry rodent-like animal from Star Trek.

‘Low-energy Trump University has never made it to #MarchMadness. Or even to the #NIT. Sad!’ he added last year during the NCAA’s basketball tournament season.

Willett mocked Hillary Clinton once – just once – when a photojournalist captured the Democrat sipping a beer at an Irish bar with a fan who was cradling an infant in one hand while quaffing with the other.

‘Worst baby shower ever,’ he captioned the picture.

Most of his tweets, however, aren’t political. 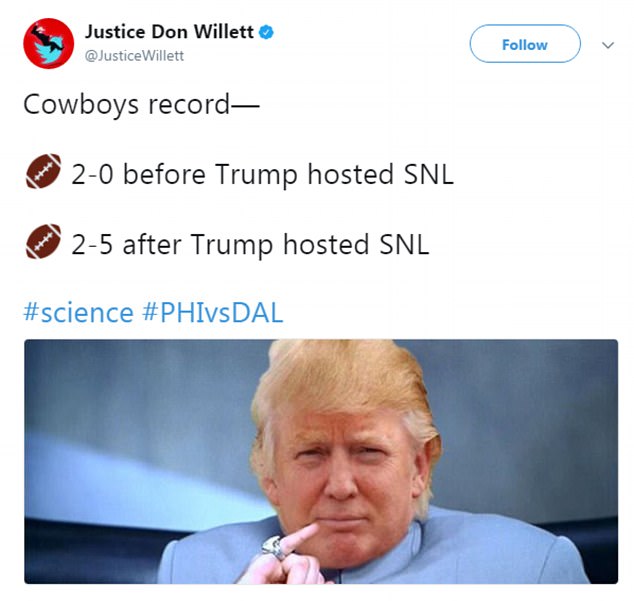 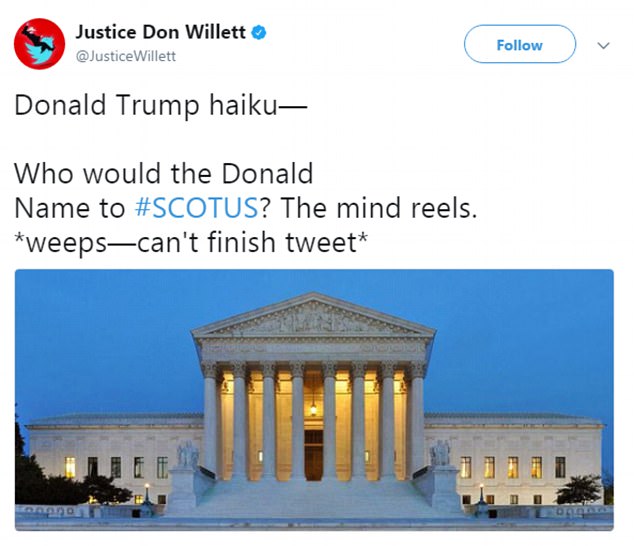 ‘The Chief Justice has rejected my proposal to add pumpkin spice scratch-n-sniff to our Fall opinions,’ he chuckled this month on Twitter.

He also tweets about his children.

‘Daddy, what do you call a vampire who’s a good cook?’ he once wrote, retelling a riddle from his 7-year-old daughter. 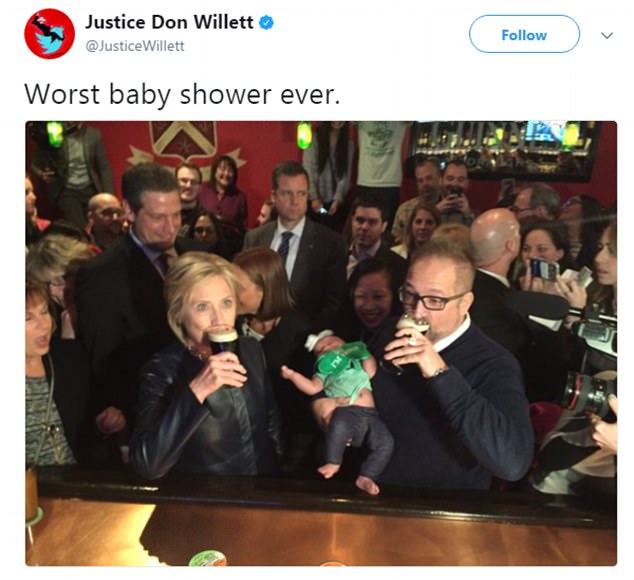 Most of the Texan’s tweets aren’t political; some are funny jabs at the day-to-day drudgery of life on the bench 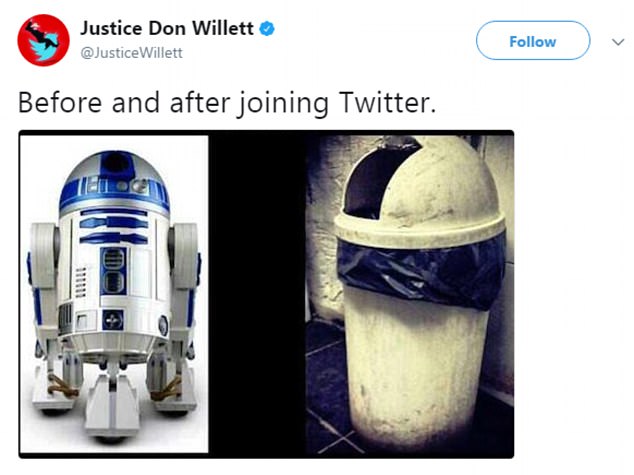 Rick Perry, a former Texas governor and the current secretary of energy, appointed Willett to his position in 2005, later winning the post in his own right in 2006 and 2012 elections.

He has also been a Deputy Assistant Attorney General in the Office of Legal Policy at the U.S. Department of Justice and Special Assistant to the President and Director of Law & Policy in the White House Office of Faith-Based and Community Initiatives.

He earned his undergraduate degree from Baylor University, and then three degrees from Duke University including his law degree.

This year Willett was on a short list of jurists the Trump administration considered for a U.S. Supreme Court appointment.

That slot went to Neil Gorsuch, but the federal appeals bench could still be a springboard for a future appointment to the highest court in the nation.