New loyalty scheme rewards you for going to the pub

There’s a new loyalty programme in town rewarding people for their credit card spending – even down the local pub.

It goes by the name of Ice and is an add-on that can be used with any registered MasterCard in more than 300 pubs across the country – and with shops on and offline, leisure companies and financial services providers.

As well as a long list of independent pubs, big name chains participating in the loyalty scheme include All Bar One and O’Neills.

The scheme will see spenders clock up extra rewards on top of any other loyalty schemes they are members of – such as Avios and M&S Sparks. But is this kind of thing worth signing up for and what can you get?

Cheers: You can rack up points to save you money on the cost of a pint at more than 300 pubs

How you earn points

Ice is a new loyalty scheme that operates in two ways and comes from a former managing director of the popular AirMiles scheme.

The first is exclusively for MasterCard holders, who must register their card with Ice to take part.

Every time they use their card to pay in any pub, retailer or financial services provider participating in the scheme they will clock up reward points.

The amount of points varies for each retailer – ranging from an accrual rate of one point per pound spent to a much more generous seven points per pound.

For the majority of transactions, the more you spend in each transaction, the speedier the rate at which you will build up points for each full pound you spend. 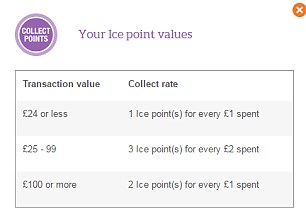 How your points build up at Barnt Green Inn

So to get the most bang for you buck and get either three points for every full £2 spent or two points for every £1 spent, you’d do you well to set up a tab behind the bar and pay for all your – and your friends’ – drinks and food in a single transaction. 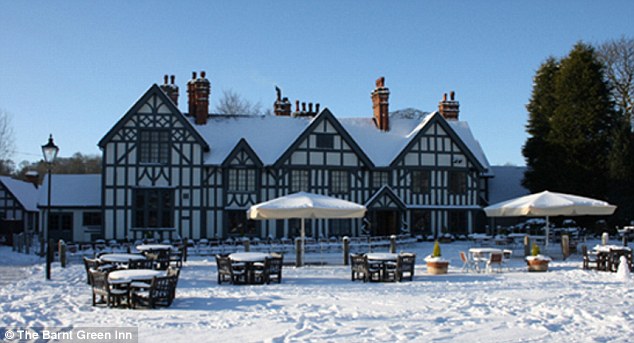 Want Ice with that? Pay for your round on MasterCard at the Barnt Green Inn and collect points

As soon as you’ve made a transaction (eg bought a round), Ice will text you an alert notifying you that you can either ‘collect points’ at the rate outlined above or ‘spend points’.

Points are turned into pennies – again, how many depends on the partner – and can be redeemed with the companies taking part in the loyalty scheme to get a discount on your MasterCard bill in the form of a credit.

Unlike many other loyalty schemes that only let you spend points when you’ve accumulated more than a certain threshold – £5’s worth in the case of the Boots Advantage scheme – you can redeem from just one point with Ice.

What’s more, when you sign up you’ll get 150 bonus points automatically so that gives you an immediate £1.50 off your MasterCard bill. 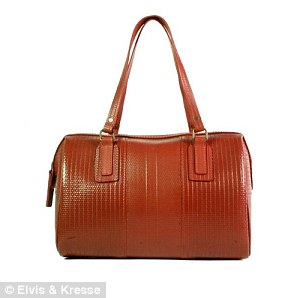 The £150 Post bag from Elvis & Kresse is made from decommissioned fire-hose previously deployed in active duty for up to 25 years, fighting fires around the UK

And the clever way to spend points is to do so when there’s the added incentive of their being doubled in value to 2p per point.

For example, if you buy a luxury handbag made from recycled materials from retail partner Elvis & Kresse, you could either choose to ‘collect points’ at the rate of seven per full £1 spent, or you could redeem your existing Ice points with Ice doubling seven Ice points per £1 you spend with each worth 2p.

So spend £150 on the bag and and you could either collect 1,050 points, or if you already have the same number of Ice points, spending them would give you £21 off in the form of a credit on your MasterCard bill.

Ice says it is currently in talks with many more prospective retail partners expected to join the scheme shortly.

There’s a second way to save using Ice for non MasterCard holders. Once you’ve registered for an Ice account, you can make online purchases via myice.com and redeem your points for online giftcards. 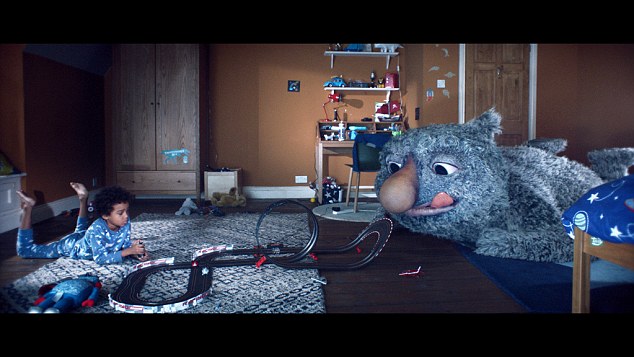 At John Lewis you collect one Ice point for every pound you spend and your first 250 points can be redeemed for 2p each on every transaction to purchase an online giftcard. So spend £250 with the retailer online through myice.com and you’ll earn enough points to get £5 off your next shop.

The M&S deal works in the same way as the John Lewis version, with one Ice point earned for every pound spent. But unlike the more generous John Lewis deal, only the first 50 points can be redeemed at the rate of 2p each. But giftcards can be bought in amounts from £1 at M&S so after you’ve spent £50 with the retailer, you’ll have enough points to get £1 off your next shop.

And, as outlined above, Ice points are earned on top of other loyalty card points such as M&S Sparks.

Jude Thorne, chief executive of Ice and ex-managing director of AirMiles, said: ‘ ‘We’ve used all our expertise in customer loyalty to create something which doesn’t have any of the frustrations of other loyalty schemes.

‘We don’t want our points to be lost and go unused, we want people to enjoy their points and use them fully, no matter where they collected them from.

‘There is also no Ice loyalty card to carry around, as any time you use a Mastercard credit card registered with Ice with one of our partner brands you automatically have the chance to earn points or spend a few points to get a bit off your purchase or a lot of points to get it for nothing. It is entirely up to you.’

Mastercard holders who sign-up to Ice today at can currently receive 150 free Ice points to spend straight away.