A tick-borne disease killed a man in Connecticut after weeks of suffering from what he thought was a stomach bug.

Michael Yoder, who lived in New Milford, died of liver and kidney failure after contracting babesiosis from a tick bite, according to the state’s medical examiner.

The 55-year-old was an avid gardener who knew about the risk that tick bites carry, and his wife Wendy told News Times they didn’t see any signs of a bug when he started showing symptoms in early summer.

At first they just thought it was a persistent stomach illness.

Eventually, he started showing more serious symptoms of weakness and yellowing skin. He went to the hospital where he was diagnosed with the devastating infection – but it was too late.

Now public health experts are warning about the prevalence of these diseases in the area, which have more than doubled in recent years.

Michael Yoder, who lived in New Milford, died of liver and kidney failure after contracting babesiosis from a tick bite, according to the state’s medical examiner

HOW TO PREVENT TICK BITES

‘We had no idea whatsoever that a tick could do something like this,’ Wendy told News Times.

‘A single tick. We thought it was bad when it  gave you Lyme disease. This one is a killer.’

Babesiosis is caused by microscopic parasites similar to what causes malaria. Those parasites are carried by ticks.

It invades a sufferer’s red blood cells and only shows symptoms in severe cases, at which points it can be irreversible.

Most people come down with flu-like symptoms such as a fever, sweats, muscle or joint pain and general feelings of discomfort. Also common is a breakdown of red blood cells – which is called hemolytic anemia.

The disease is generally treated with a combination of anti-malarial drugs and antibiotics.

It is rarely fatal but can send people to the hospital for multiple days.

In the most serious cases, like Michael’s, it can cause anemia so severe organs begin to fail.

Babesiosis can be fatal if sufferers:

Michael’s sister Dawn Schappach told the News Times that he had his spleen removed in the 1980’s.

Babesiosis is entirely preventable if steps are taken to limit exposure to ticks. 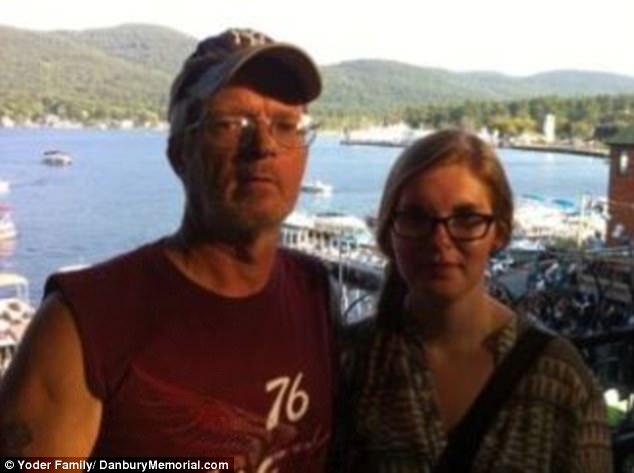 Michael, pictured with his daughter, first showed signs of a persistent stomach bug. By the time he started showing more serious symptoms and could diagnosed it was too late

There have been more and more cases reported in the United States annually, and primarily in the New England area of the country.

Connecticut, specifically, has seen a huge uptick in recent years. In 2011 there were only 74 cases of the disease and three years later there were 205, according to numbers provided by the Centers for Disease Control.

Just in Michael’s hometown of New Milford, the Health Department has reported 55 babesiosis confirmed by blood tests since the beginning of 2017. That is compared to a total of 41 that were reported in 2016.

Dr Paul Nee, an infectious disease expert in the area told News Times that ‘tick-borne diseases as a whole are up,’ and that each year ‘we see more severe cases.’

Researchers at the Western Connecticut Health Network have reported the highest number of deer ticks, which carry both Lyme disease and babesiosis, since 2011 when they first started doing field monitoring.