New model predicts Covid cases will decline through winter and drop to 9,000 per day by March 2022

The end of the COVID-19 pandemic may be near with cases and deaths declining to levels not seen in more than a year by next spring, a new model predicts.

The analysis, conducted by the COVID-19 Scenario Modeling Hub, which advises the Centers for Disease Control and Prevention (CDC), looked at different scenarios regarding the trajectory of the pandemic.

Researchers predicted that the U.S. has reached the peak of the fourth wave fueled by the Delta variant and will see all indicators improve.

This includes the number of virus cases dropping to about 9,000 per day and the number of daily deaths falling below 100 by March 2022. 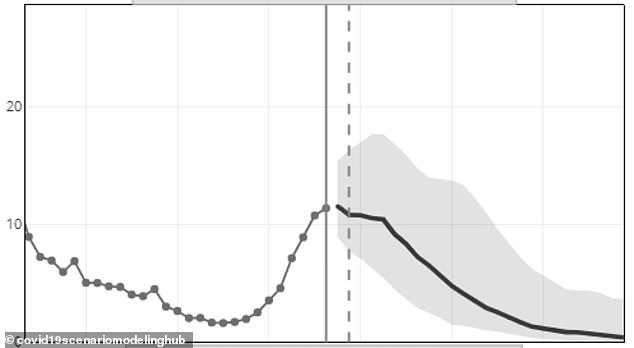 BEST CASE SCENARIO FOR DEATHS: Deaths are also projected to drop from 11,563 current weekly deaths, or 1,651 per day, to 415 weekly fatalities, or about 59 per day (above)

‘Any of us who have been following this closely, given what happened with Delta, are going to be really cautious about too much optimism,’ Dr Justin Lessler, a professor of epidemiology at the University of North Carolina, who is part of the Hub’s Coordination Team, told NPR.

‘But I do think that the trajectory is towards improvement for most of the country.’

For the new model, which was published on Wednesday, the team amalgamated nine different models from universities across the U.S.

Researchers came up with four different scenarios depending on whether or not children between ages five and 11 are authorized to get vaccinated and whether or not a new variant starts spreading.

The model does not advocate for or against childhood vaccinations, but merely suggests they will begin occurring by fall 2021.

Lessler told NPR that the most likely scenario sees kids being approved for Covid shots against and no highly transmissible strain being identified.

These are figures not seen since late March 2020, when states first began shutting down and implementing stay-at-home orders.

Experts have previously the decline in cases be attributed to two things: vaccines and the ‘true’ number of people infected by the virus.

As of Wednesday, 63.9 percent of the entire U.S. population, or 212 million – has received at least one dose of the vaccine and 54.7 percent are fully vaccinated.

This means that nearly two-thirds of Americans have at least some level of protection against the virus. 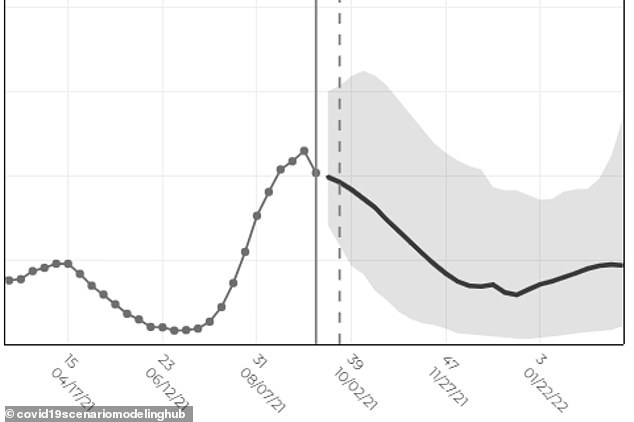 WORST CASE SCENARIO FOR CASES: Another scenario, which predicts the emergence of a new infectious Covid variant, would lead to weekly cases falling to 467,507, or 66,786 daily infections (above) 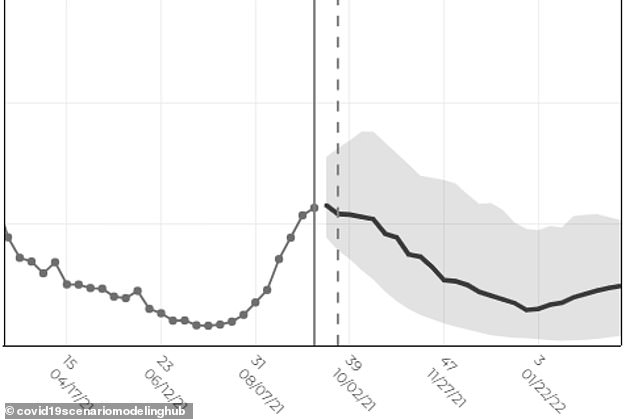 WORST CASE SCENARIO FOR DEATHS: Weekly deaths would also have a modest drop to 4,922, or 703 daily deaths by March 2022 (above)

Recently, President Joe Biden has mandated vaccinations for healthcare workers and for people working at companies with 100 or more employees – or perform weekly testing – which will drive vaccination numbers up even further.

Additionally, the Centers for Disease Control and Prevention (CDC) suggests that far more than 42.2 million Americans have been infected with COVID-19 and the true figure stands at 120.2 million.

Combine this 120.2 million statistic with the number of people who have been vaccinated and the virus is running out of vulnerable bodies to infect.

‘We’ve seen really big Delta waves. The virus has eaten up the susceptible people. So there are less people out there to infect.’

Notably, the model predicts there won’t be a surge in winter as was seen last year, but the researchers tell NPR there will be variability between states. 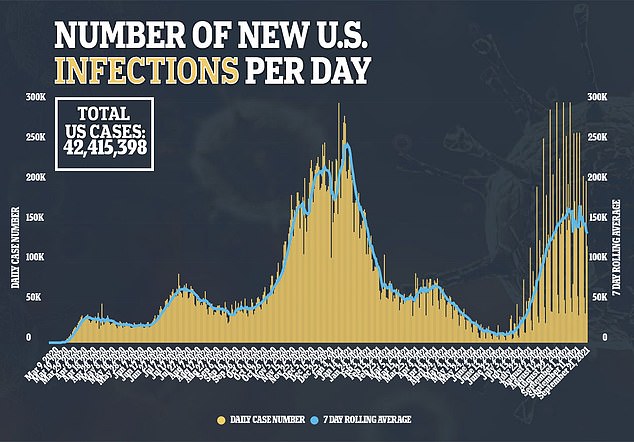 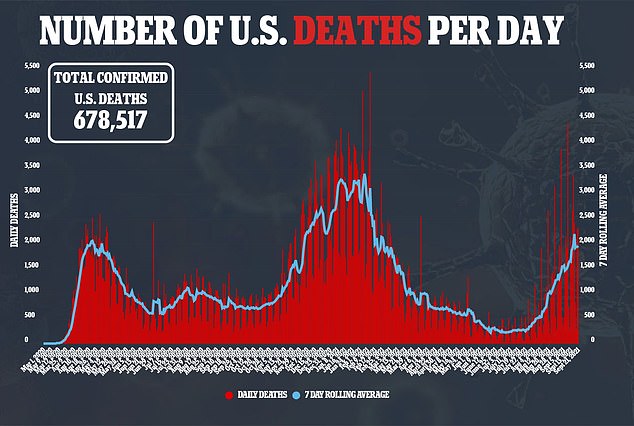 In the worst case scenario, in which children aren’t approved for vaccination and a new variant that is 1.5 times more transmissible starts circulating, cases and deaths would still decline – but not by as much.

These numbers are similar to levels that were seen during summer 2020, amid the second wave of the pandemic, and in April 2021, following the deadly third wave.

The team warns Americans not to led their guards up and to keep following mitigation measures, such as wearing masks in public.

‘We have to be cautious because the virus has shown us time and time again that new variants or people loosening up on how careful they’re being can lead things to come roaring back,’ Lessler told NPR.

‘I think a lot of people have been tending to think that with this surge, it just is never going to get better. And so maybe I just need to stop worrying about it and take risks. But I think these projections show us there is a light at the end of the tunnel.’