Six years ago, when I was a police officer, I started struggling to breathe whenever I was called to an emergency and had to run to my patrol car.

The operators would be on the radio wanting to talk to me as I drove, but I’d spend several minutes gasping for air.

I assumed I was just unfit and this was starting to show as I reached my 50s.

But then I became short of breath when walking upstairs or carrying heavy shopping, so in late 2012 I saw my GP.

After checking my lung function, he referred me for hospital tests which showed I had chronic bronchitis — one of the main forms of chronic obstructive pulmonary disease (COPD), or progressive lung disease.

The airways in my lungs had become inflamed over time, most likely as a result of smoking. I’d started at 18 — and was soon on 20 cigarettes a day, if not more.

I’d tried giving up before, but only stopped completely in 2014.

The doctor said my breathing would get worse and I was prescribed medications including preventer inhalers to relax the respiratory muscles, as well as a reliever inhaler for my breathlessness, like someone with asthma.

But I still found myself coughing to clear mucus from my chest and by early 2014, I’d need my inhaler even more — I certainly couldn’t chase any criminals.

That March I was moved to answering phone queries. In August the police medical officer decided I wasn’t fit enough for operational duties, so I took early retirement at 53. It was the sensible decision, but I was sad I could no longer do the job I loved.

What are the risks of destroying vagus nerves around the lungs?

Later that year I began working as a store security guard. Everyday life was becoming a struggle. My consultant said my lungs were only a third as effective as they should be, which was a shock.

In July 2016, my mum read about a new treatment for COPD where they burn away some of the nerves around the lungs to stop them sending signals to produce more mucus.

I showed my GP the article and he referred me to the clinical trial it mentioned. Within a week I’d heard back from Professor Pallav Shah, a lung specialist at the Royal Brompton Hospital in London, who was leading the trial.

I underwent the 45-minute procedure in May last year under general anaesthetic — I was able to go home later that same day. There was a slight pain in my left lung for a few hours, but it went. Straight away, my breathing was much more comfortable and I was back at work the next day.

Later that week the team called to say there’d been minor technical difficulties during my operation which meant they’d only operated on one lung — they hadn’t told me then because of the strict placebo trial guidelines. I had my other lung treated two weeks later. I didn’t mind as now I knew I’d had the real treatment.

After the second procedure, instantly my breathing was even better. I could push myself that little bit further when walking and my cough of five years stopped straight away.

A regular check-up in November showed my lung function had improved by 10 per cent, massive for lungs as poor as mine. I walk more than 10,000 steps a day at work, with much less difficulty than before. I still use my inhalers but my quality of life is better, and hopefully through the trial I’ve helped other patients, too.

Professor Pallav Shah is a consultant physician in respiratory medicine at the Royal Brompton Hospital in London.

With more than three million people in the UK with COPD, it’s the second most common lung disease after asthma. About 90 per cent of those affected have at some time been a smoker.

COPD is an umbrella term. The main conditions it includes are: emphysema (where the lung’s air sacs become damaged by inflammation due to excess mucus) and chronic bronchitis (long-term inflammation of the airways caused by excessive mucus).

In healthy lungs, tiny branches of the vagus nerve — which runs from the brain, down the windpipe and into the lungs — tighten the muscles in the airways and stimulate mucus production. In COPD lungs, this mucus irritates the airways (already inflamed and narrowed) even more. This means air can’t enter and leave the lungs as easily, so becomes trapped, causing a persistent cough, wheezing, a tight chest and breathlessness.

COPD is initially treated with medications to dilate the airways; these typically improve lung function between 5 to 10 per cent but there are downsides, including the inhaler not distributing the drug evenly, and side-effects such as dry mouth and blurred vision. 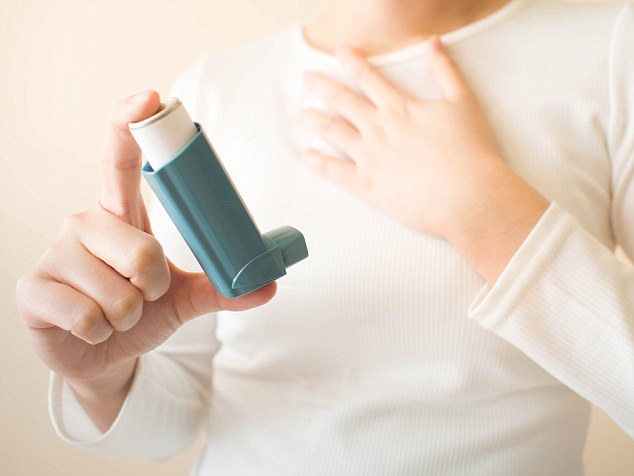 COPD is initially treated with medications to dilate the airways; these typically improve lung function between 5 to 10 per cent but there are downsides, including the inhaler not distributing the drug evenly, and side-effects such as dry mouth and blurred vision

In the past decade, we’ve developed a number of new treatments to collapse portions of damaged overinflated parts of the lung.

In the past three years, a new non-invasive procedure has been trialled. It was only introduced to the UK last year. It’s a one-off treatment, so better than drugs which patients have to take all the time. It has an added effect in terms of improving lung function when used with medication.

It uses radiofrequency ‘heat’ energy to destroy branches of the vagus nerve. With the patient under a general anaesthetic, we insert a tube with a balloon at the end into the top of one lung. The balloon is then filled with saline.

Attached to the balloon is a half-moon shaped electrode just over 3mm in size, which is heated up to 80c. The balloon keeps the tissue of the airway cool and the electrode in the correct place.

The heat energy penetrates the airway’s tissue to about 14mm, sufficient to burn away the nerve branches. We rotate the electrode by 90 degrees and repeat the procedure three more times, completing a 360 degree rotation inside the airway.

All the nerves below this treatment site are now unable to receive messages. The procedure is repeated on the other lung.

The patient feels the benefits almost immediately — the optimal level of improvement is reached after three months.

We’ve carried out about 20 of these procedures jointly at the Royal Brompton and Chelsea and Westminster hospitals so far as part of an international trial.

The results are promising. Worldwide, about 70 per cent of patients have seen an improvement in lung capacity, breathlessness and quality of life.

In our trial there were dramatic improvements in ten patients having the real treatment (with no change in the placebo group). Those patients suffering with unpleasant side-effects of inhalers could, in some cases, stop taking them, while those who continued to use them found them even more effective — we think this is because the drugs can now reach further down into the airways.

This treatment will make COPD easier to live with. The final results should be available in three months. We’re now looking at whether this can also help severe asthma. We hope to have some results in 2019.