People allergic to cats but would like to own one may get some respite thanks to a new cat food that claims to reduce allergens by up to 47 per cent.

Scientists working for pet food firm Purina spent a decade studying the causes of cat allergies and found it was cat saliva on the fur that causes the sniffles.

One in five adults report a sensitivity to cat allergens, including people living in a house with a cat – which prompted researchers to look for a solution to allergies.

The new feline-friendly food neutralises a protein in cat saliva responsible for allergens, this stops it passing to fur and is less likely to be spread around a room.

Many people assume it is cat hair or dander – the flakes of skin shed by the animal – that are responsible for allergens – but it’s what is on that cat, researchers say.

All cats produce Fel d 1, regardless of breed, age, hair length, sex or body weight, but at differing levels.

When cats groom themselves, Fel d 1 gets on the hair and skin through the saliva and with shedding, it eventually gets into the home environment.

It spreads widely and easily, attaches itself to any surface it comes into contact with and remains in houses for over a year or more, the team said.

The key ingredient in the new cat food, called Pro Plan LiveClear, is a specific type of special protein sourced from eggs.

As cats eat the food, the protein binds to the Fel d 1 and neutralises it in their mouth.

By reducing active Fel d 1 in the cat’s saliva, it reduces the amount of the allergen transferred to the cat’s hair and dander when they groom, ultimately reducing the allergen in the environment. 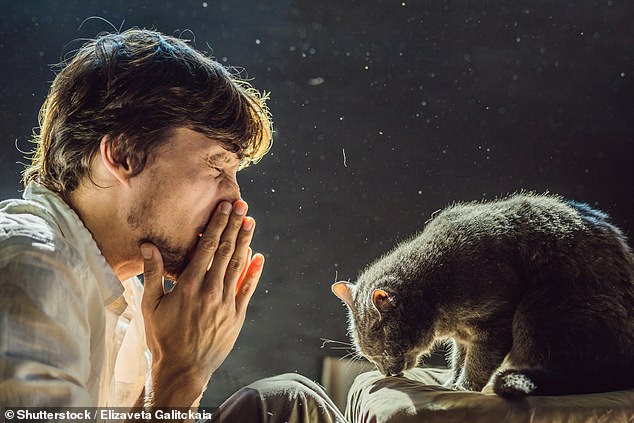 One in five adults report a sensitivity to cat allergens, including people living in a house with a cat – which prompted researchers to look for a solution to allergies

Researchers discovered that feeding the new food can reduce the allergens on cat hair and dander by an average of 47 per cent from the third week of daily feeding.

Vet and broadcaster Dr Mark Evans said this was a fascinating new discovery.

‘What fascinates me about [the food is that] It reduces cat allergens in cat’s saliva without impacting the physiology of the cat,’ he said.

‘Because in the scientific world we don’t know exactly why cats produce Fel d 1, Purina has found a way to neutralise the allergen rather than inhibit its production – it’s a feline-friendly way to help bring pets and humans closer together.’

The launch of the new LiveClear food comes as a recent survey found people with sensitivities to cats would go to great lengths to keep their pet in their lives.

It found that 76 per cent of cat owners remove their pet from the home when allergies act up and 75 per cent would restrict the cat to specific parts of the house.

Two thirds of people would use special products on the cat including allergen sprays or bathing the cat regularly.

The research revealed they also go to great lengths to remove allergens from the home, with 92 per cent using a high-quality vacuum cleaner, two thirds putting covers on their furniture and a quarter cleaning furniture daily.

According to charity Allergy UK, pets are the second most important cause of allergies in the home.

With people spending more time at home than ever, owners who are sensitive to cat allergens could be finding the problem increasingly difficult to manage.

She said they are also rarely fully feline-friendly, adding that ‘for example, bathing your cat can be a stressful experience and is often impossible.’

Similarly, keeping them restricted to a certain part of the house, can also result in increased levels of stress for the cat, she said.

‘Unfortunately, human allergies are a major cause of cat relinquishment – in 2019, 1,320 cats were sadly given up for adoption to Cats Protection due to human sensitivities to cat allergens.’

A safety study of the food and its impact on cat digestion showed that the egg product ingredient coating the kibble is completely safe for cats to eat. 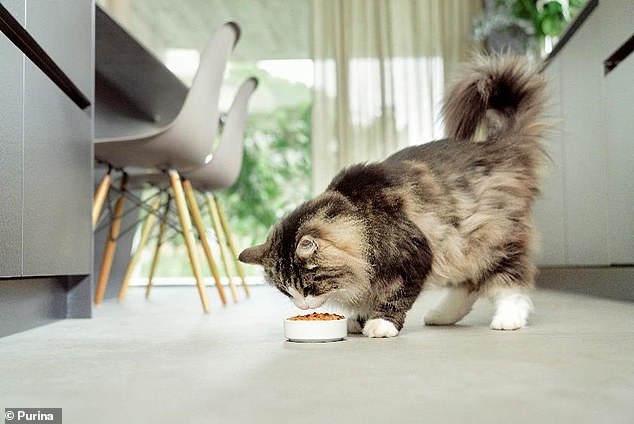 The action happens in the cat’s mouth, but once swallowed, the ingredient is digested like any other protein, the safety study discovered.

There are a number of ways in which cat owners try to manage their exposure to cat allergens and keep their symptoms at bay, says Amena Warner from Allergy UK.

This includes taking antihistamines and using inhalers for quick symptoms relief as sensitivity to cat allergens is often linked to allergy-related asthmas.

They also regularly clean and hoover, get non-allergic family members to bath and grooming the cat and then turn to medical help if those measures don’t work.

’Every cat is unique though and so the level of Fel d 1 they produce varies, just as every person’s sensitivity level to these allergens is different,’ said Warner.

‘That is why there is no ‘one size fits all’ way to manage exposure to cat allergens.

‘Every little bit helps so a combination of management tools often works best to help reduce cat allergens in your home – the combination is unique to your lifestyle.’

She said the new food would be useful when used as part of a wider cat allergen management regime, creating a ‘meaningful extra tool for allergen households’.