England is brimming with wonderful pubs – which makes the establishments that made the cut for this new tome very special indeed.

Great Pubs of England by photographer Horst A Friedrichs and writer Stuart Husband, published by Prestel, honours 33 of England’s ‘finest and most distinctive inns’ with stunning photographs, all accompanied by absorbing descriptions that reveal their fascinating history.

Delightful establishments that feature in the book include a beautiful Liverpool watering hole lauded as a ‘cathedral among pubs’, a Cotswolds gem beloved by Simon Cowell and a spooky 14th-century Salisbury pub where a ‘wealth of paranormal activity is served up’.

In the foreword, John Warland, who runs guided walking tours that ‘explore London’s rich hostelry heritage’, writes: ‘Since time immemorial, the public house has offered a place of shelter, liquid refreshment, sustenance and occasional lodging. But it’s much more than the sum of these parts. It’s often the very heart of a community, raising funds for its patrons, providing ad-lib counselling services, and offering a sociable antidote to the prevalent plague of loneliness.

‘The pub is the backdrop for first dates, mending broken hearts, or toasting hatches, matches and dispatches. At its best a great pub feels like home, or makes you feel like you’re at home – it’s not always the closest to where you are, but it’s a perfect fit with who you are.

‘I’m sure that this book will inspire [readers] to go forth and explore England’s liquid history anew. It’s the perfect snapshot of where pubs have been, where they are now, and where they might be headed.’ Below is a selection of evocative pictures of the characterful boozers that appear in the compendium…

THE BOLEYN TAVERN, EAST HAM, LONDON: Punters in this pub, which has been running since 1900, sit amid ‘the etched-glass likenesses of footballing legends Bobby Moore, Trevor Brooking [and] Geoff Hurst’. The football theme is in place because the pub is a short distance from what was once the Boleyn Ground, the home of the West Ham United football team. The book says: ‘On match days… The Boleyn was packed to the gunnels with home supporters (clutching their £3 pints in genuine glasses) and away supporters (who were charged £4 for the same pint in a plastic glass).’ The pub has now ‘been restored to its Victorian splendour’ with ‘seven snugs divided by ornate panels, Carrara marble floors, and a massive stained-glass skylight dominating what was once a dingy billiards room’. Today, punters can ‘bask in the glory of a place that’s once again an expansive temple to relaxation, pleasure, company and enjoyment’ 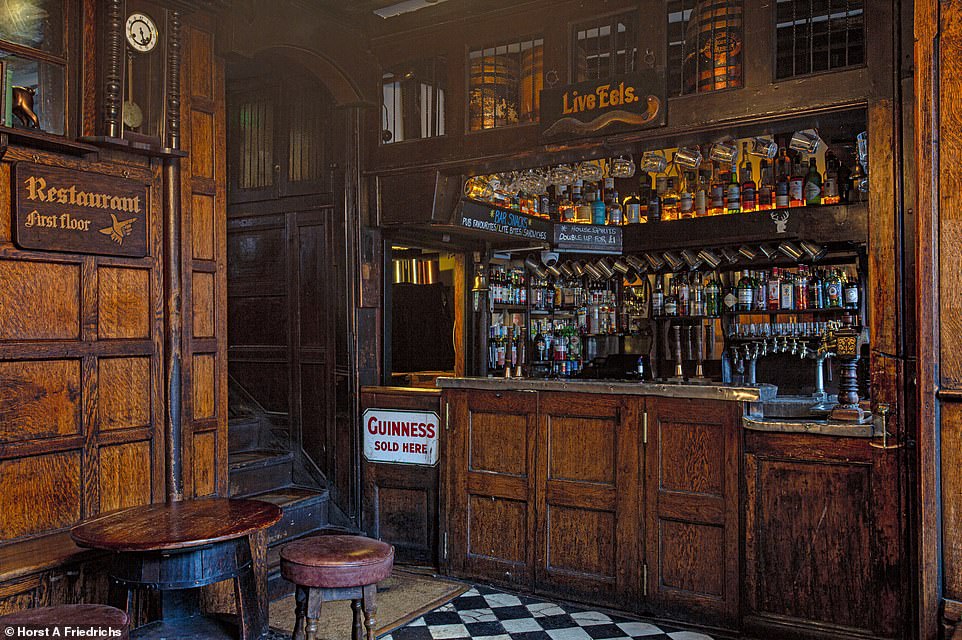 HAUNCH OF VENISON, SALISBURY: This charming timber-framed boozer dates back to 1320, the book reveals, and a ‘wealth of paranormal activity is served up’, with ‘reports of skittering chairs and shattering candleholders (all, frustratingly, occurring just out of CCTV reach)’. Each Halloween, the pub opens up the ‘secret’ bar, ‘a tiny and crepuscular space under the restaurant with its own concealed entrance’. Another intriguing feature is a photo of Winston Churchill and Dwight D. Eisenhower that ‘references the legend that the pair plotted the D-Day landings here in 1944’. Plus, there’s a ‘live eels’ sign by the bar that ‘thankfully only promises rather than delivers’ and upstairs a ‘mummified hand housed in a former bread oven by the inglenook, said to be forcibly excised from a punter after he was caught cheating’ during a card game. The book points out, however, that the hand is ‘actually a replica – the original was stolen before being “handed in” to the police, and now resides in the Salisbury Museum’ 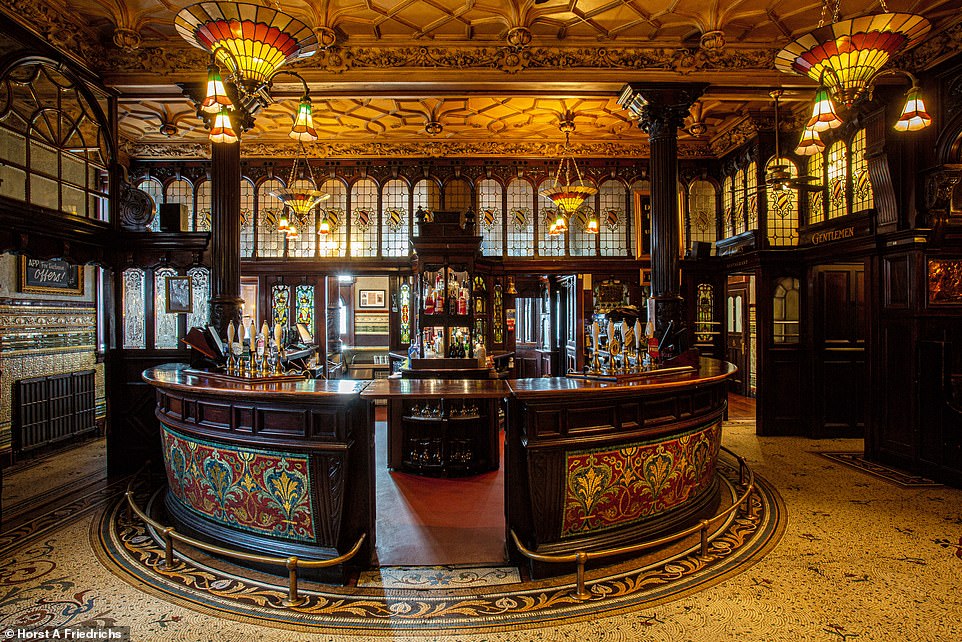 PHILHARMONIC DINING ROOMS, LIVERPOOL: This beautiful Grade I-listed establishment is ‘a place lauded by heritage body Historic England as “a cathedral among pubs” and “the pinnacle of the gin palace”‘, the book reveals. The pub, which was built between 1898 and 1900, is described by the tome as a ‘phantasmagoria of High Victoriana, from its turreted, gabled and oriel-windowed castle-like exterior… to an interior that puts a melange of imposing styles – Gothic, classical, Jacobean, Romanesque, Scots baronial – into a giant blender’. Even the gents’ loos are eye-catching, with ladies apparently regularly lining up to peek at their ‘rose-pink faux-marble 1890s “Rouge Royale” urinals’ and ‘glinting mosaics’. Such is the pub’s allure that John Lennon was moved to claim that ‘the principal price of fame’ was ‘no longer being able to have a pint in the Phil’ 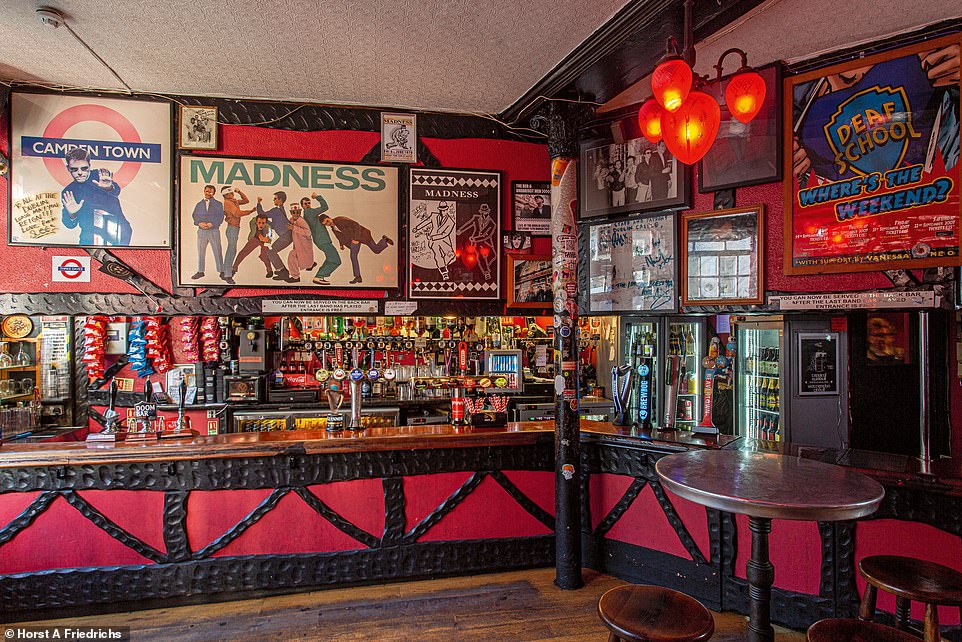 THE DUBLIN CASTLE, CAMDEN, LONDON: The Dublin Castle opened in 1856 to serve the Irish community of ‘navvies’ who were building the nearby railway, and its music tradition grew from their weekend ceilidhs [music sessions], the book reveals. This pub, however, was ‘put on the map’ by the ska band Madness, which ‘packed the place out for six weeks’ with ska kids when they were starting out. Coldplay and The Libertines also played some of their formative gigs here, the book reveals – and Amy Winehouse, who lived nearby, ‘treated the pub as her local’. The book describes the interior as ‘Guinness-steeped and [as] authentically scuffed as any mosh-pitting indie kid could wish’ and notes that a black Music Heritage Award plaque, ‘given to venues that have played a crucial role in creating music history’, adorns the pub’s facade 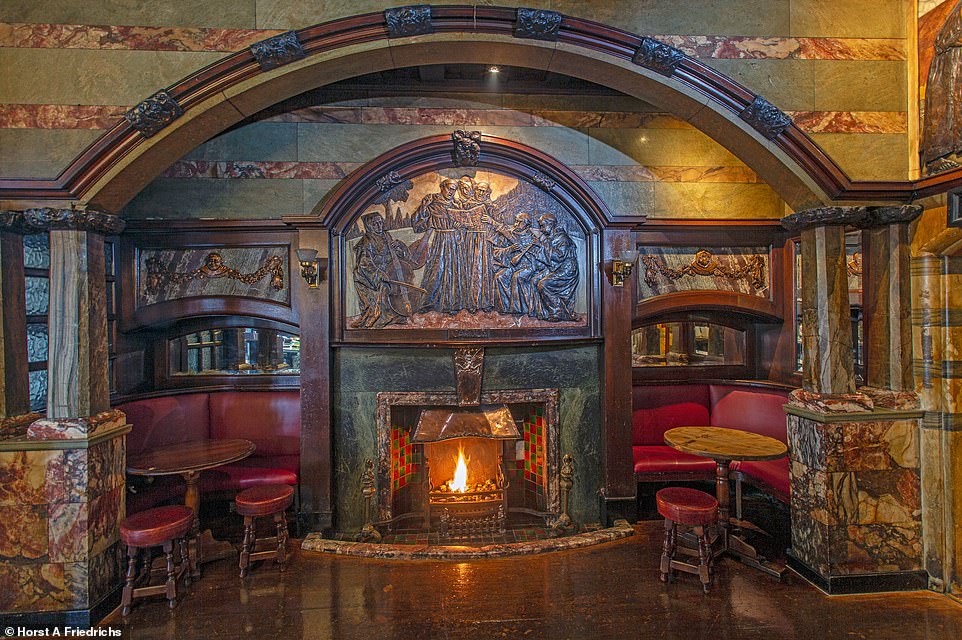 THE BLACKFRIAR, BLACKFRIARS, LONDON: The decor of this ‘spectacular and giddily eccentric’ Grade II-listed pub is inspired by the history of the site on which it sits – a 13th-century Dominican priory once stood here. On the outside above the doorway a large stone friar ‘stands sentinel’, but it’s ‘inside that the fun really starts’, the book says, with dozens of friars ‘in sculptures, mosaics, metal reliefs and stained glass’ helping to form ‘surely London’s most singular pub interior’. ‘It’s like a Byzantine chapel designed for Croesus, or maybe Donald Trump,’ one regular tells the authors. The pub’s ‘startling bling’ is the work of the architect Herbert Fuller-Clark and the sculptor and Royal Academician Henry Poole, ‘who were given carte blanche to remodel the pub in the 1900s by then landlord Alfred Pettitt’. ‘To miss this place would not only be regrettable. It would amount to heresy,’ declare the authors 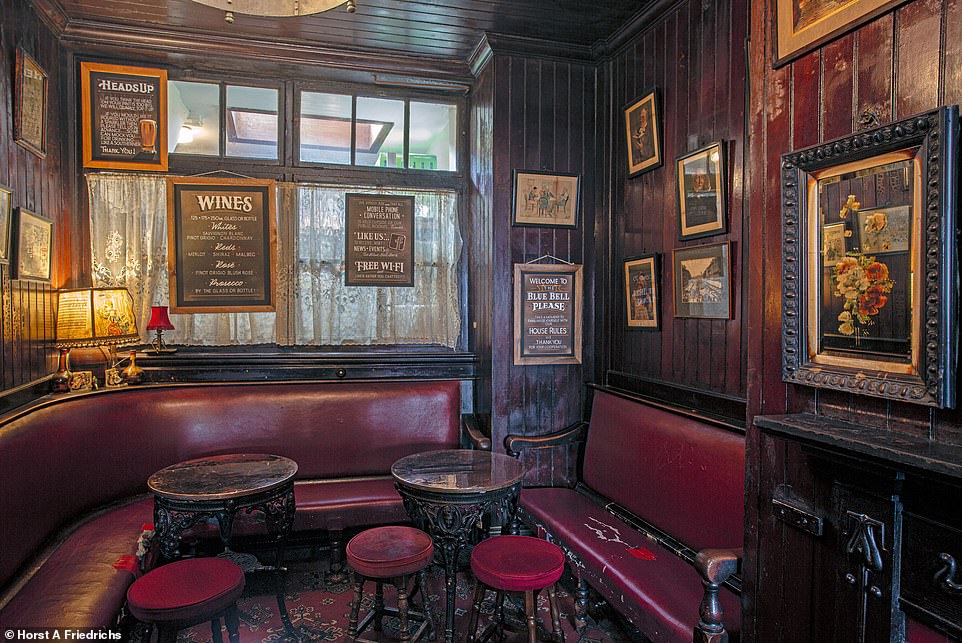 THE BLUE BELL, YORK: The book explains that this ‘Edwardian hostelry’ has had six trustees in 112 years, with one ‘Basil Fawlty-esque’ former publican hanging a ‘big orange neon “Private Party” sign on the door, all day every day, to discourage admittance to all but those in the know’. The book reveals that those who are in the know and step inside will discover ‘something of a treasure’, noting that one Canadian couple ‘apparently loved the place, and the regulars, so much that they emigrated to York just to be near it’. And there’s a framed letter in the bar from Hollywood actor Paul Newman in which he describes it as ‘the epitome of the traditional English pub – a perfect venue for good company, great conversation, and terrific beer’. Intriguingly, staff bonuses at the pub are ‘dependent on their acing a regulars-themed questionnaire’, with questions including: ‘What does Corridor John drink? (Answer: a pint of blonde), and: Why do Corridor John and Robin actually drink in the corridor? (Answer: because they don’t like the heat.)’ Pub owner John Pybus tells the authors: ‘Places like The Blue Bell still play a really valuable role in society. Close them all and the country would definitely fall apart’ 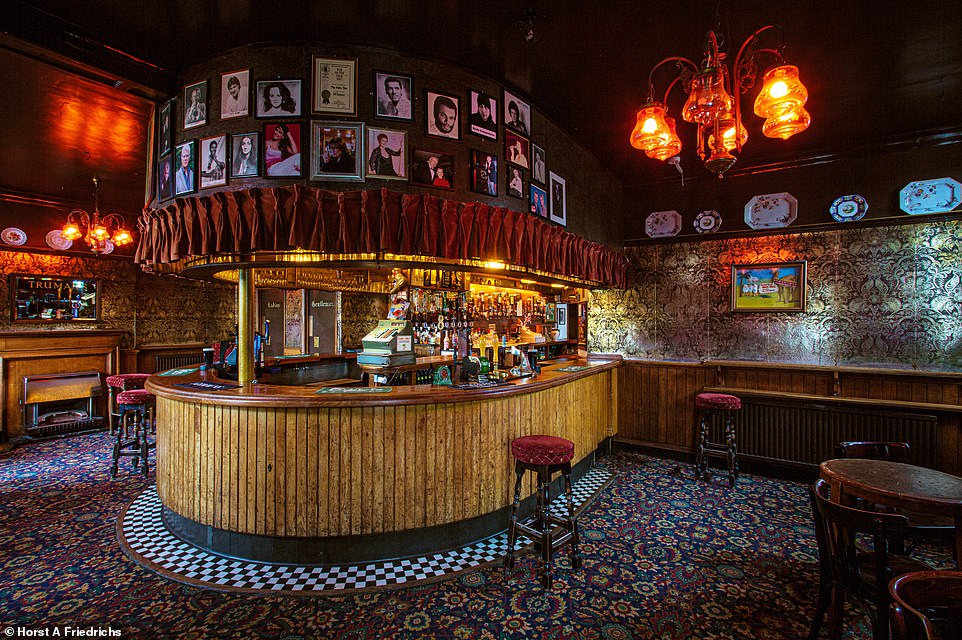 THE PALM TREE, BOW, LONDON: This pub has been run by East End couple Val and Alf Barrett since 1977 – ‘and pretty much preserved in aspic ever since’. The book continues: ‘Witness the remarkable interior: an oval-shaped wooden bar, dazzling gold wallpaper, a psychedelic carpet, and red velour curtains. The front bar is hung with photos of old-school tuxedoed crooners and thrilled celebrity visitors, and the back bar is chock-full of Alf’s sporting trophies and boxing memorabilia.’ The pub is cash-only, ‘though a sign does reassure punters that “we now sell spirits in metric sizes”‘. The book says that ‘no less than three proprietors of the Queen Vic, the Cockney hostelry in the BBC’s long-running soap EastEnders – Mike Read, Barbara Windsor and Danny Dyer – have pulled up a stool at Alf’s bar, perhaps in order to see how it’s done’. Weekend jazz sessions have taken place on its tiny front-bar stage for the past four decades, with the ‘likes of Helen, an octogenarian singer who once lived next door to notorious East End gangsters the Kray Twins’ and 94-year-old Jack, ‘who used to play the piano for Second World War icon Dame Vera Lynn’, keeping punters entertained with their ‘renditions of Cole Porter and Irving Berlin standards’ 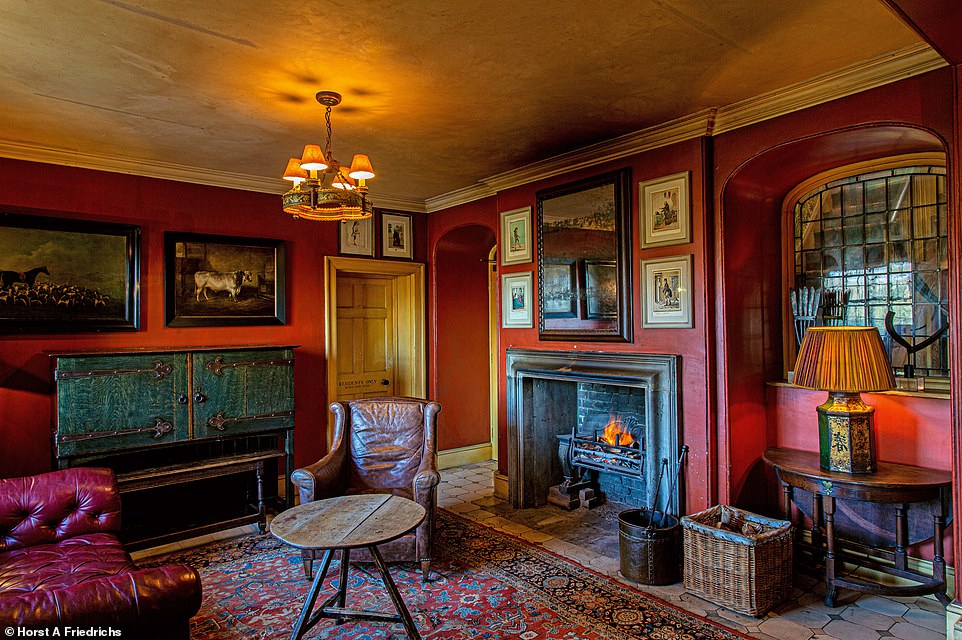 THE GUNTON ARMS, THORPE MARKET, NORWICH: This pub is run by landlord Ivor Braka, known as the ‘rock ’n’ roll art dealer’. The pub, which sits on the edge of the thousand-acre Gunton Park estate, was originally the estate manager’s house and then operated as a ‘slightly chintzy hotel’ called the Elderton lodge. When Braka acquired it, he set about transforming it into ‘another world’. ‘That world has been painstakingly crafted to be a little darker, more mysterious, more romantic, and a tad more subversive than our own,’ the book notes. The decor features ‘roaring hearths’, ‘chunky cabinets’ and burnt-orange walls that have been rubbed with dirt to create an ‘artfully scuffed look’. The pub’s artwork ‘starts innocuously enough, with hunting prints and paintings of complacently plump cows in the lobby lounge; but penetrate further and things take a more disconcerting turn’. For example, one unusual piece is ‘an oil by Jonathan Yeo of fallen leaves, serenely autumnal until you notice the images of genitalia concealed within’. There are also photos of Braka’s wife, the supermodel Kristen McMenamy, ‘in various states of artistic deshabille’ 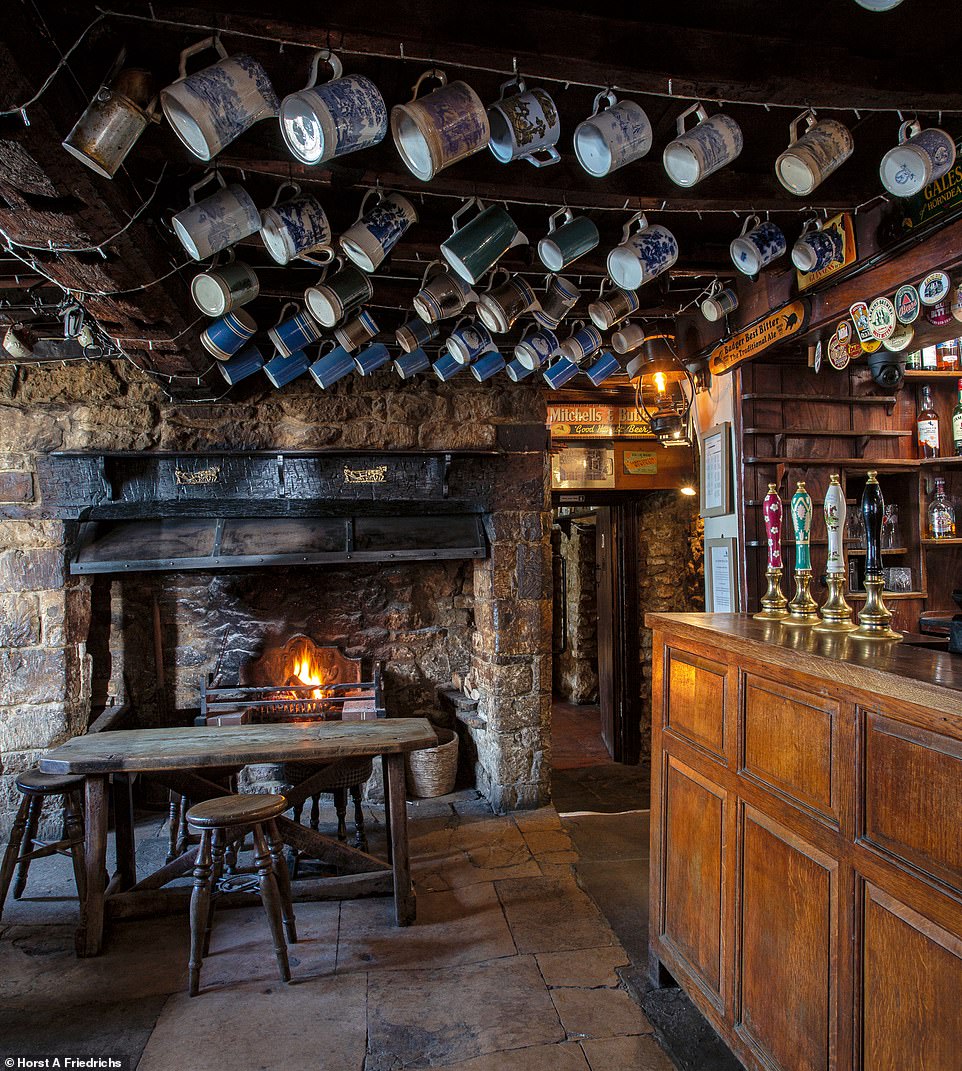 THE FALKLAND ARMS, GREAT TEW, CHIPPING NORTON: This pub, which lies in the ‘bucolic’ Cotswold hamlet of Great Tew, attracts an A-list clientele, the book reveals. Pub manager Andy tells the authors: ‘The Beckhams were in recently… we had Sir Patrick Stewart in last night, and Simon Cowell’s a regular.’ But Andy stresses that whoever walks in, regardless of status, will find the same things on offer: ‘Great beer, great service and a sense of familiarity.’ And something of a time capsule. The tome continues: ‘There’s no music, no fruit machines and no TVs; instead, there’s rambling roses round the door, a view of the ancient village school across the lane through the mullioned windows, and an ambience as timeless as the ancient grandfather clock in the corner, which stopped at some point between the 16th century and the 21st.’ Until recently, you ‘could even still purchase snuff from behind the bar’. The picture above shows the ‘cornucopia of hanging mugs and jugs’ that hang from the pub’s ceiling, some of which have been ‘lost to involuntary headbutts’ 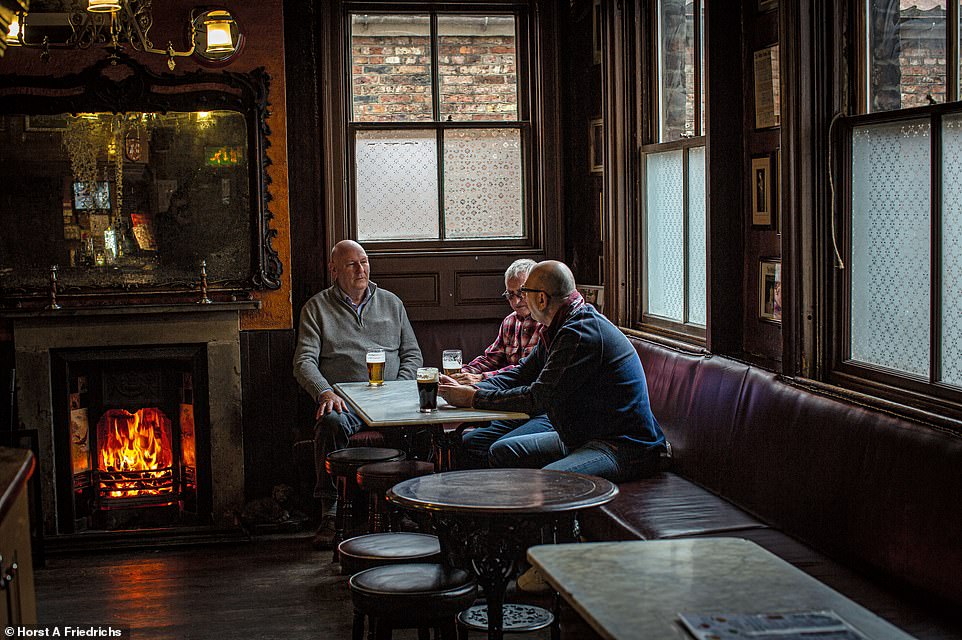 WHITE HORSE INN, AKA NELLIES, BEVERLEY: This Yorkshire ‘institution’ was originally a 17th-century coaching inn, the book reveals. Over the centuries, it’s ‘evolved into a warren of idiosyncratic rooms – the Ladies’ Parlour, the Linen Press Room, the Scullery – with tobacco-stained walls, pitched wooden floors, gas lighting, ornate mirrors, and a series of cast-iron fireplaces and open ranges that, when all ablaze, set the fire alarms jangling at such a pitch that they drown out the peal of the bells from nearby Beverley Minster’. The book says: ‘Around midday, as the doors open, familiar cries can be heard (“stout please”), favourite tables are bagged, newspapers are spread out, pints are nursed, and dry-as-dust Yorkshire witticisms are exchanged.’ The pub’s popular nickname derives from former owner Miss Nellie, who ran the establishment for nearly a quarter of a century from 1952