Premier Gladys Berejiklian said the state remained on ‘high alert’ as she announced the new cases on Wednesday morning.

Of the new cases, only one case is a returned traveller from overseas while two are from Victoria.

The new cases have sparked a health warning for anyone who visited Rhodes IKEA on August 8 and Parramatta Westfield on August 5 after a previous confirmed cases visited the locations while infectious.

One case has been linked to Our Lady of Mercy College in Parramatta, taking the cluster at the school to three.

The source of the newest case is under investigation has it has not been directly linked to the previous two cases.

The school has been closed for 14 days as concern about the virus spreading within the school grows.

Students and staff have been advised to self-isolate for 14 days, monitor their health and get tested for COVID-19.

The school is expected to reopen on Monday, August 24.

The closure comes after several clusters popped up schools across the state with the number of cases linked to the Tangara School for Girls in Cherrybrook in the city’s north-west rising to 19 on Wednesday.

Ms Berejiklian issued a desperate plea to schools to not hold excursions and extracurricular activities amid reports an overnight religious retreat took place shortly before the first Tangara case was diagnosed.

Despite the growing cases Ms Berejiklian has announced NSW residents returning from Victoria will have their hotel quarantine fee waived for the next month to ease the financial burden on returnees. 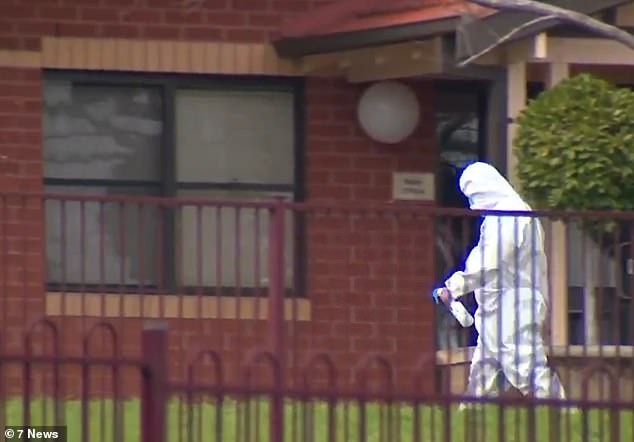 Deep cleaning continued at Tangara School for Girls in Cherrybrook on Tuesday as the coronavirus cluster grew to 17. The figure is expected to rise

The charge will be waived retrospectively and apply to NSW residents already in hotel quarantine after travelling from Victoria.

Anyone who attended the following venues during the dates and times below are advised to isolate, monitor and test for COVID-19 should any symptoms present, however mild:

• Dooleys Lidcombe Catholic Club from 5pm on 7 August to 1:30am on 8 August

Ms Berejiklian said the NSW Government recognised the cost of hotel quarantine was a challenge for many NSW residents making their way home from Victoria.

‘Hotel quarantine is key to reducing the risk of seeding of COVID-19 from Victoria into NSW,’ Ms Berejiklian said.

‘We have listened to the concerns of NSW residents who say they cannot afford to come home to NSW and will now give them more time to return.

‘We are asking any NSW residents who are in Victoria and want to come home to make their way back to NSW before Friday, 11 September if they want to avoid paying for hotel quarantine.’

‘We understand the cost associated with hotel quarantine has made it difficult for NSW residents to return home from Victoria – that is why we have waived that cost for the next month,’ Mr Hazzard said.

‘These changes are also retrospective and will apply to NSW residents who have travelled from Victoria and are already in hotel quarantine.”

The moratorium on the hotel quarantine charge for NSW residents will expire at 12:01am on Friday, September 11.

There are 133 COVID-19 cases in hospital with eight patients in intensive care and seven being ventilated.