Wild surf is battering the New South Wales coastline, and authorities have warned dangerous surf conditions will only get worse in the wake of Tropical Cyclone Gita.

Authorities have issued warnings for dangerous swells, including waves up to four metres high along the NSW coastline.

Authorities have issued warnings for dangerous swells, including waves reaching three to four metres along the NSW and Queensland coastlines (The Gold Coast, on QLD’s border with NSW, is pictured)

Mr Gonzalez warned waves would reach about two metres off the coast of Sydney on Monday, before picking up overnight.

Despite beaches along the state’s coastline being closed over the weekend and lifesavers rescued about 150 people from dangerous surf at the weekend.

‘Northern New South Wales is expected to experience extremely strong conditions, with waves in excess of four metres as a result of the system pushing down from Queensland,’ he said.

‘So as a lifesaving community, we’re certainly encouraging everyone to be extremely careful before heading out and not to overestimate their ability or underestimate the conditions.’ 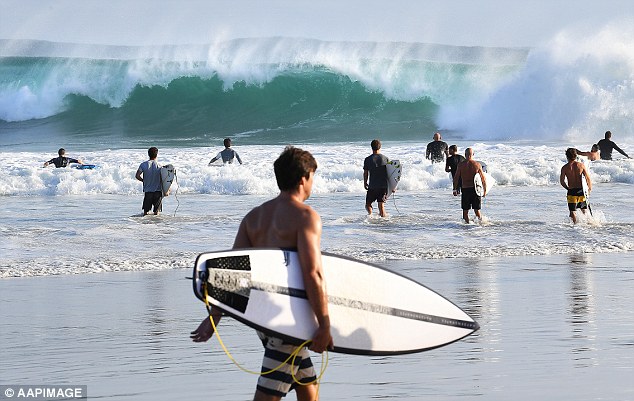 Surf Life Saving’s Liam Howitt warned swimmers, surfers, and fishermen to steer clear of the water – but surfers have reveled in the chance to navigate the waves 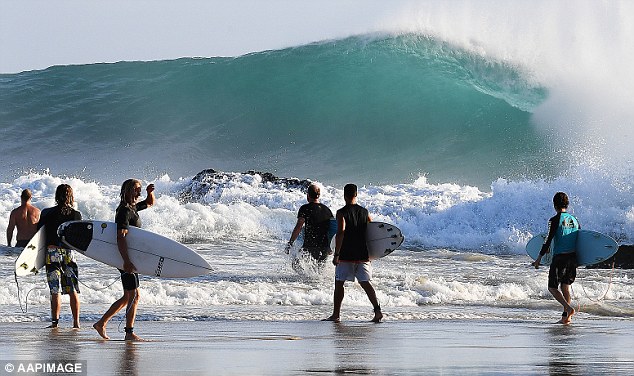 Beaches along the state’s coastline were closed, and remain closed as heavy swells and surf hit Australia’s east coast in the wake of Tropical Cyclone Gita 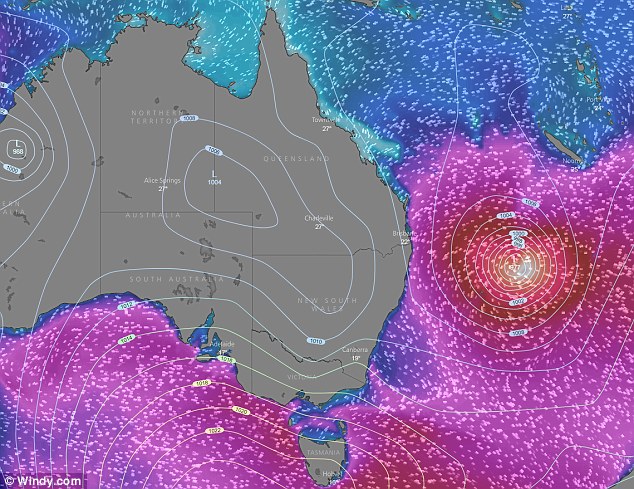 Meanwhile, a severe storm warning has been issued for parts of the south coast and the Snowy Mountains.

While the country escaped the worst of Tropical Cyclone Gita, Mr Gonzalez said Sydney might see some showers on Monday afternoon.

Temperatures will reach about 27C on Monday, before a cool change sets in and Sydney gets a reprieve from muggy and oppressive conditions.

Mr Gonzalez said Sydney weather would cool down on Tuesday and remain cool until hot weather returned in time for the weekend.

‘There will be another round of heat for the weekend, with temperatures hitting 31C on Saturday and Sunday,’ he said.

New South Wales has seen below average rainfall this month, recording only 38m, well below the 120m February average.

WHAT IS THE FIVE DAY WEATHER FORECAST ACROSS AUSTRALIA? 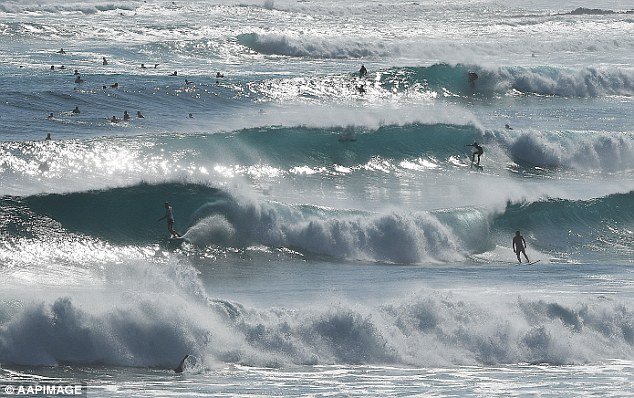 Meanwhile, the search for a swimmer has turned into a recovery operation.

The 22-year-old man went missing in rough surf off the NSW north coast on Saturday, after becoming caught in a rip at Nambucca.

‘We are no longer looking at this as a rescue operation, more as a recovery operation,’ he said. 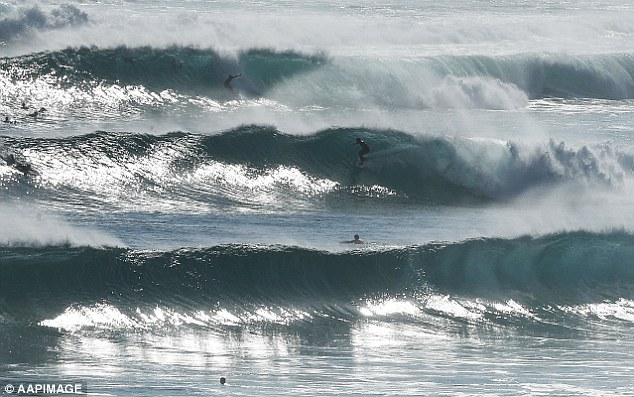 Despite danger warnings and closed beaches, surfers were pictured riding the massive waves at the Gold Coast, in Queensland’s south at the weekend 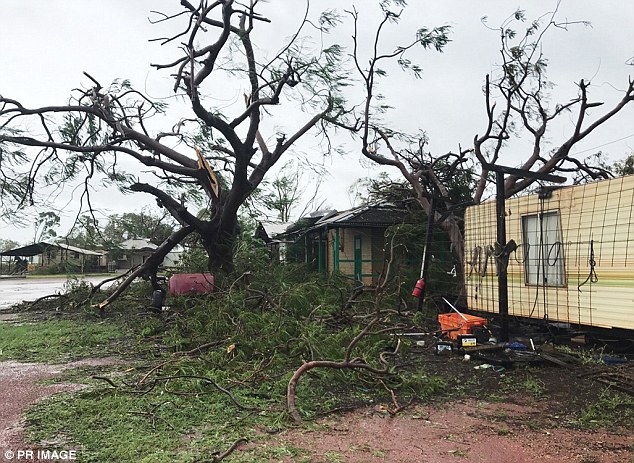 Around 250 kilometres south of Broome, Anna Plains Station felt the brunt of Tropical Cyclone Kelvin as roofs were knocked off, windows smashed and trees were uprooted

Meanwhile in Queensland, surf conditions are once again expected to close beaches.

Heavy easterly swells whipped up by tropical cyclone Gita resulted in several beaches on the Gold Coast and Sunshine Coast being closed throughout the weekend.

Conditions are forecast to be similar on Monday with the Bureau of Meteorology predicting swells up to three to 3.5 metres along the entire southern coastal region.

The swell isn’t forecast to ease until late on Monday night or early Tuesday in Queensland.

Lifeguards are encouraging beachgoers to stay out of the rough conditions after having to make a number of rescues over the weekend.

On Sunday a man in his 50s had to be rescued by the Westpac Lifesaver Helicopter at Jumpinpin bar on the Gold Coast.

The man fell off his jet ski in the dangerous conditions and spent significant time in the water before being rescued.

‘Our key message at the moment for the safety of beachgoers and the safety of lifeguards is the encourage people to stay out of the water completely,’ a Surf Lifesaving Queensland spokeswoman told AAP.

In other parts of the country, there are fears lives and homes could be lost in Western Australia’s top end as the region cops a battering from flooding and destructive winds of up to 150 km/hr.

Residents are bracing for the worst as Tropical Cyclone Kelvin was upgraded to a category two and hit landfall in a remote part of the Kimberley region on Sunday morning.

A cyclone red alert is in place as of Sunday night for Bidyadanga to Sandfire in the Kimberley with all roads closed.

‘There is a threat to lives and homes. You are in danger and need to act immediately,’ Department of Fire and Emergency Services WA posted on Facebook.

There are reports of sheds being destroyed by the strong wind gusts, 9 News reports.

Heavy rainfall is likely to continue over the far west Kimberley and far east Pilbara.

‘People in the West and North Kimberley Districts need to take action now as major flooding is expected over the coming days,’ Department of Fire and Emergency Services WA posted.

It advised residents in the region to watch for changes in water levels so they are ready if you need to evacuate to pack a relocation kit and relocate equipment and livestock so they do not get caught in floodwaters. 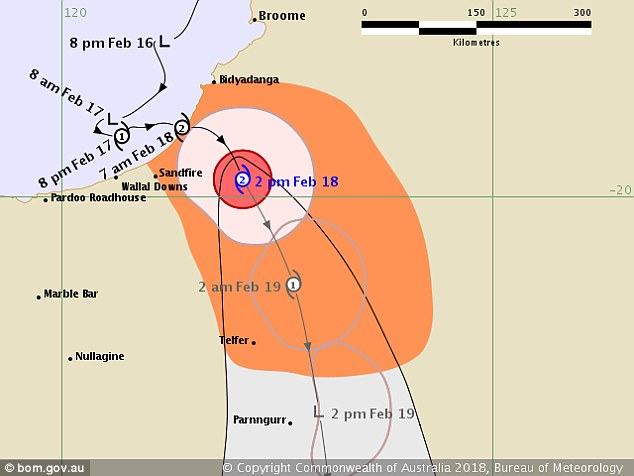 Residents in the cyclone-hit region are advised to stay indoors

The cyclone threat for between Broome and Bidyadanga has passed but residents are warned to take care to avoid dangers caused by damage.

People are advised to not swim, fish in Roebuck Bay or Dampier Creek in Broome until further notice following heavy rainfall since Saturday.

Broome is now just 23 millimetres off recording its wettest year ever, after record rainfall last month.

Around 250 kilometres south of Broome, Anna Plains Station felt the brunt of the cyclone as roofs were knocked off, windows smashed and trees were uprooted.

‘The worst of it is gone for us but it’s still quite windy,’ he told AAP.

‘I think the cattle probably coped with it better than us. 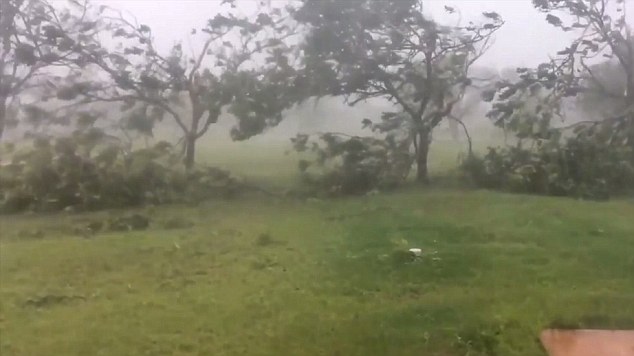 ‘People in the West and North Kimberley Districts need to take action now as major flooding is expected over the coming days,’ Department of Fire and Emergency Services WA posted 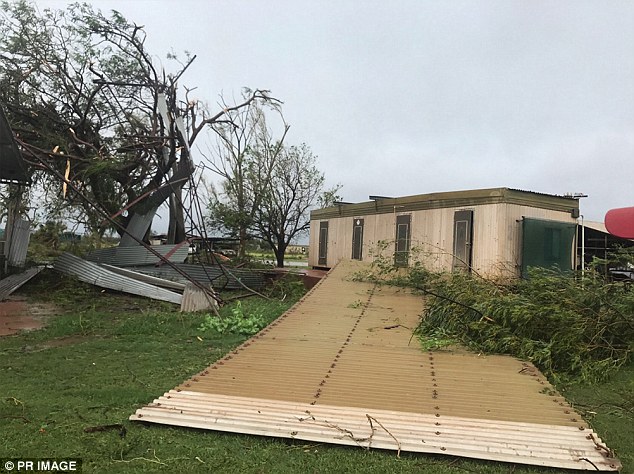 Anna Plains Station owner David Stoate, who has 20,000 cattle on the property, estimates the damage to be about $150,000

‘The wind has picked up quite a lot in the last half an hour so it’s pretty full on at the moment,’ Community CEO Tania Baxter told the ABC.

‘Everyone’s inside, we’re all just prepared for it. We’ve all been waiting for it to happen for a few days now so I think everyone’s ready for it.’

Department of Fire and Emergency Services WA said the cyclone will gradually weaken on Sunday night or Monday morning as it continued to move inland.