Premier Gladys Berejiklian was missing from Tuesday’s press conference after announcing she would no longer be attending the daily meetings.

Instead NSW Health’s Dr Jeremy McAnulty announced the new numbers, revealing 78.8 per cent of the state’s population have now received one dose of the vaccine and just over 46 per cent have been double vaxxed.

Case numbers have been dropping each day within the past three days with experts hopeful infections will continue to go down.

A woman in her 80s from western Sydney has died from the virus with Dr McAnulty confirming she had received one dose and had underlying health conditions.

A man in his 50s from western Sydney also died.

He had received one dose of the vaccination just three days before testing positive and did not have any underlying health conditions. 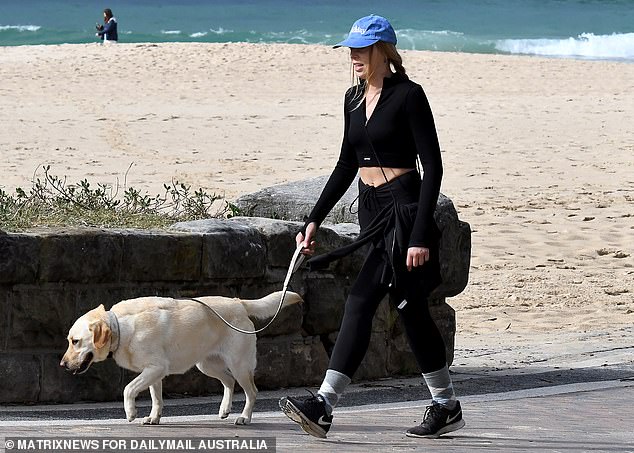 For western NSW, 14 new infections were recorded while another 14 were counted in the Hunter region and nine cases in the Central Coast.

Earlier, Deakin University chair of epidemiology Catherine Bennett said the reproduction rate in NSW – the number of people each infected person passes the virus onto – had now dropped to 1 after spending most of the outbreak at 1.3.

‘I think we’ve got a really good sign that we are now seeing this curve flatten,’ she told the ABC.

NSW’s rolling seven-day average also dropped slightly to 1,395 from 1,430 in a promising sign the state is getting on top of the spread.

Ms Berejiklian last week said modelling shows NSW’s rise in daily cases would peak this week, though the number of Covid-19 patients in hospital will increase until about mid-October and ICUs peak until early November.

Professor Bennett said the rising vaccination rate in the most virus-hit parts of Sydney was making a difference.

Almost 85 per cent of residents in Blacktown in the city’s west have received their first dose, Ms Berejiklian said last week.

‘We’re starting to see that real effort to lift the vaccination rate translate to better protection in the community and that then translates to a much higher level of control,’ Professor Bennett said. 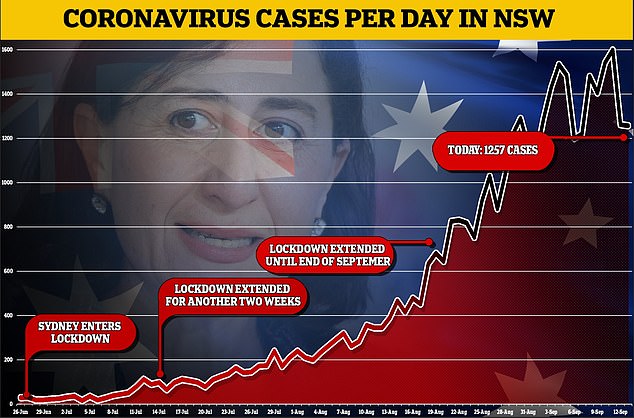 NSW recorded 1,257 locally-acquired cases on Monday – down from 1,599 on Saturday – as the the state’s double-dose vaccination rate hit 47 per cent

University of South Australia epidemiologist Professor Adrian Esterman said he was optimistic the spread of cases was slowing in NSW, but it is too early to know if the outbreak has reached its peak.

‘It has all the sign of a peak, but the numbers are not there to tell me it is a peak – but I am very optimistic,’ he said.

Ms Berejiklian on Monday said officials were ‘seeing a stabilisation’ in some of Sydney’s 12 local government areas of concern.

But she warned case numbers were now soaring in the city’s inner suburbs. 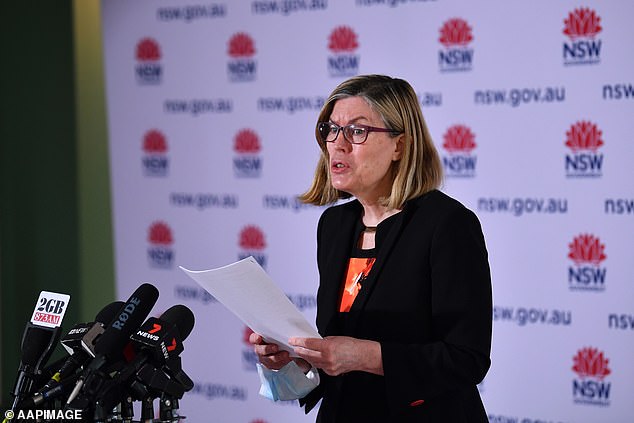 Health officials predict NSW’s rise in daily cases will peak ‘in the next week or so’, while the number of Covid-19 patients in hospital will increase until about mid-October. Pictured is NSW Chief Health Officer Kerry Chant on Sunday 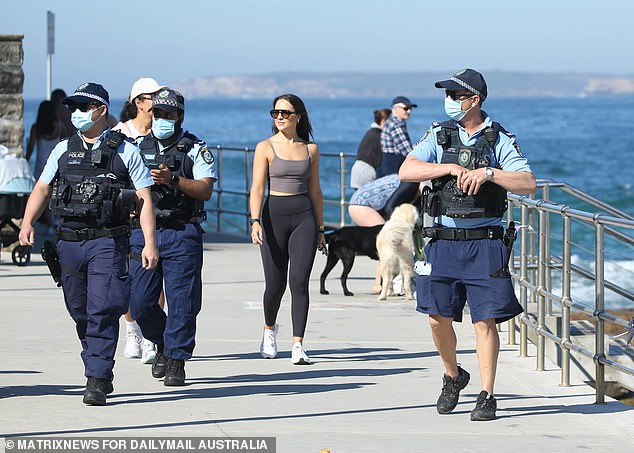 ‘We have seen also an increase in cases as we mentioned yesterday and the day before in the inner city areas of Glebe and Redfern,’ she said.

‘We ask communities in those areas to please come forward and get vaccinated, but also to make sure they’re sticking to the Covid restrictions.’

There are 1,189 Covid-19 patients being treated in hospital, including 222 in intensive care, of which 94 require ventilation.

Sydneysiders can now gather outdoors with up to five people as the first set of restrictions are rolled back across the city.

The new rules on outdoor gatherings came into effect for millions on Monday, marking the beginning of the end of a hard lockdown that has lasted almost 12 weeks in the city.

Those living outside of the 12 hotspot local councils are now able to meet outdoors with up to five adults plus any children under 12 for as long as they want.

Residents living in the hotspot councils – who are subject to a 9pm-5am curfew – will be able to gather outdoors with their household for two hours a day as long as everyone is aged over 18.

Regardless of location, residents must be fully vaccinated and must do their outdoor activity within 5km of their homes.