New South Wales is on high alert after Melbourne reported four new Covid-19 cases on Monday, as health authorities warn Australians to brace for more infections over the colder months.

The race has begun to find a missing Covid-19 infection link after Melbourne recorded its first locally-acquired coronavirus transmission in 86 days.

Health authorities are on high alert as they battle to contain a potential outbreak after four new cases were identified in the city’s northern suburbs.

They include a man aged in his 30s, another man in his 70s, a woman in her 70s and a preschool-aged child from the Whittlesea area.

Hundreds of Melburnians have been ordered to immediately get tested and self-isolate as a host of venues were identified as sites visited by infected cases, including a Woolworths, Nando’s restaurant and popular shopping centre food court. 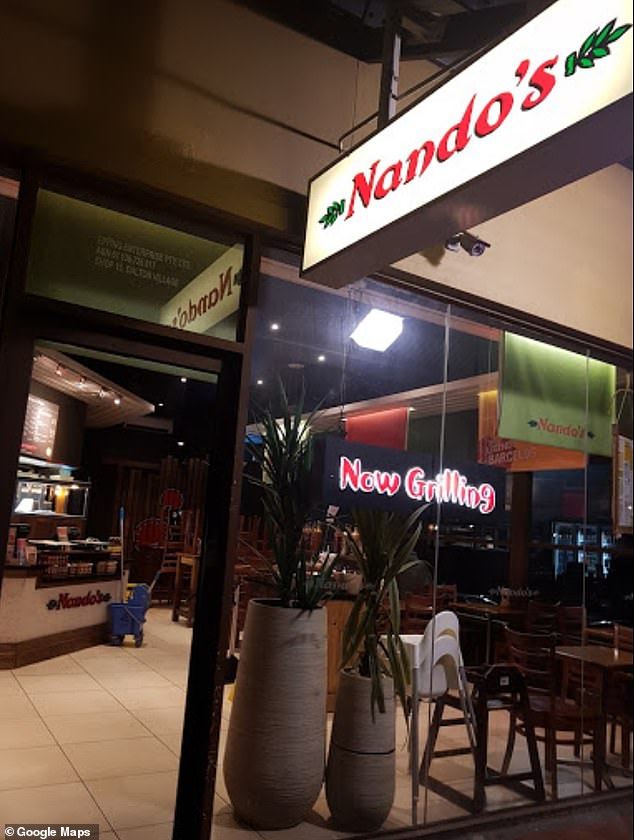 Anyone who attended Nando’s Epping (pictured) in Melbourne’s north on May 19 between 8.30pm and 9.20pm must get tested and isolate for 14 days, regardless of the result

More potential exposure sites are expected to be revealed as the desperate search to track down the mysterious source of the infection ramps up.

Health officials have warned one of the cases is ‘likely to be quite infectious’ and may have contributed to him spreading the virus to other family members.

There are also growing fears of a contact tracing bungle after health officials listed  the wrong supermarket as a potential exposure site.

Any diners who attended Nando’s Epping on May 19 between 8.30pm and 9.20pm must get tested and isolate for 14 days, regardless of the result.

The same order applies to anyone who attended Woolworths Epping North on May 22 between 4.45pm-5:45pm.

A host of tier two sites were also listed late Monday night, where anyone who attended at the specific times must get tested and self-isolate until they get a negative result. 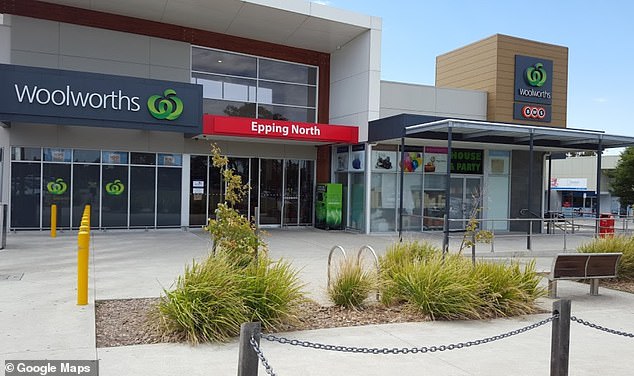 Anyone who attended Woolworths Epping North (pictured) on May 22 between 4.45pm-5:45pm must get tested and self-isolate for 14 days

They include anyone who was inside the Urban Diner Food Court at Pacific Epping Shopping Centre on Sunday May 23 between 1.15pm-2.30pm.

An infected case also attended Epping North Shopping Centre on May 22 between 4:45pm and 5:50pm, where they visited the House and Party store between 5.15pm-5:50pm.

An infected case also visited Shell Coles Express in Reservoir on May 18 between 3.15pm-4.15pm.

Anyone who attended the Preston Lions vs Whittlesea NPL football match on the night of May 21 at B.T. Connor Reserve in Reservoir must also get tested and isolate until further notice.

Those who attended Futsal Brunswick between 9am-10am on Sunday must also be on high alert.

Woolworths Epping North is the same supermarket where a Wollert man who tested positive earlier this month had attended almost two weeks ago. 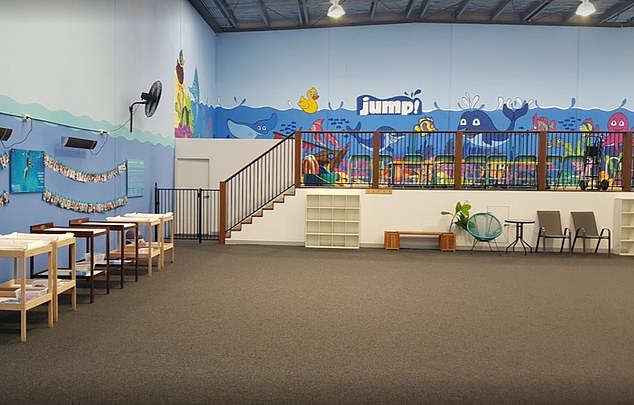 The Victorian Department of Health are now asking visitors to the Jump! Swim School, in Bundoora, Melbourne’s north-east, between 8.55am and 10.15am on May 21 to get tested immediately and self-isolate for 14 days

A health spokeswoman said authorities are yet to establish whether the previous and most recent case who visited the store on May 22 were linked to one another.

Health officials were forced to admit last Friday they incorrectly listed a Woolworths store in Epping, rather than Epping North, as an exposure site visited by the Wollert man earlier this month.

The error was detected after wastewater testing detected traces of the virus in the area.

‘We’ve got the government making basic errors over the locations of supermarkets, and those basic errors are putting all of us at risk and that is just not acceptable,’ Mr O’Brien said.

‘This is a government that created a second wave through its own incompetence.

‘They promised us they learnt the lessons and it seems they haven’t.

‘If we get another outbreak in Melbourne because this government didn’t do the basics right then frankly the Health Minister and other ministers need to lose their jobs.’ 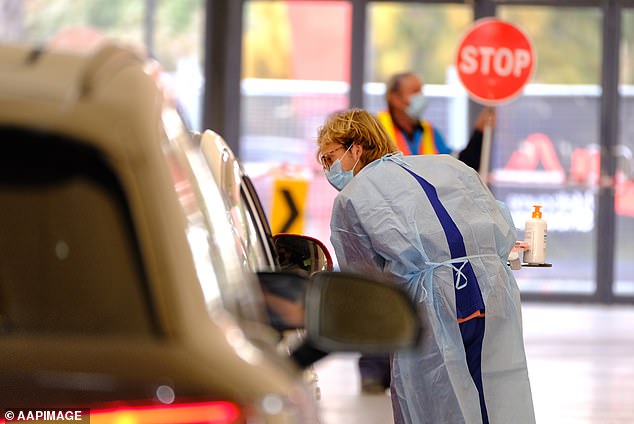 Hundreds of Melburnians flocked to testing clinics on Monday after the city recorded four new Covd clinic. Pictured is the drive-through clinic at Royal Melbourne Showgrounds

Earlier on Monday, the Department of Health urged visitors to the Jump! Swim School, in Bundoora, Melbourne’s north-east, between 8.55am and 10.15am on May 21 to get tested immediately and self-isolate for 14 days.

It comes after the infected woman and preschool-aged child attended the facility for a swimming lesson.

The pool has been closed until further notice to undergo a deep clean.

Thousands of shoppers are also at risk after one of the infected men visited Highpoint Shopping Centre in Maribyrnong on May 20 between 5pm and 8pm.

Tier one; Anyone who visited the below sites must get tested and isolate for 14 days, regardless of the result

Highpoint Shopping Centre, Maribyrnong, 5pm – 8pm on May 20. Shoppers must get tested and isolate until further notice.

Tier 2: Anyone who attended the following sites at the times listed must get tested and isolate until a negative result or further advice

Shoppers who attended the centre at the identified times are required to get tested and isolate until further notice.

Contract tracers are currently retrieving information about which stores the infected case visited.

‘We are getting further advice from the gentleman is to specifically where the visitations were in Highpoint Shopping Centre.

‘Getting the information out was really critical and then as further detailed information becomes available, we will update that site.’

The shopping centre said it is ramping up its cleaning regimes throughout all high traffic areas.

Genomic sequencing is due back on Tuesday, which will help determine if the cases are linked to the infected man from Wollert who flew to Melbourne from South Australian hotel quarantine earlier this month.

Mr Foley said the dates didn’t add up but refused to rule out a possible link.

‘Given the proximity of the gentleman from early May who returned from hotel quarantine in Adelaide who lives in that city, we do not rule out the prospect that there is a link,’ he said. 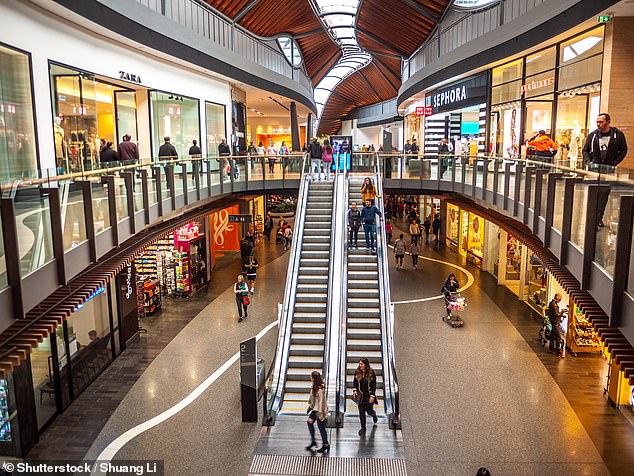 The other potential exposure site is the High Point Shopping Centre in Maryibyrnong (pictured), between 5pm and 8pm on May 20. Shoppers who attended the centre at the identified times are required to get tested and isolate until further notice

‘The dates do not line up immediately so we cannot rule out if there is a missing link out there.’

‘We are concerned, without a doubt, this is not a time to be complacent.’

Health authorities were alerted to the cluster after a Whittlesea man presented for testing on Sunday. He and an asymptomatic male relative from a separate household both tested positive.

A woman and the Whittlesea man’s preschool-aged child have also since been confirmed as Covid-19 positive.

The health minister said they would have more information on Tuesday after further conversations are conducted with the close contacts of the new cases.

‘Based off initial interviews and intelligence and are likely to be subject to further expansion as conversations with the cases and close contacts evolves,’ Mr Foley said. 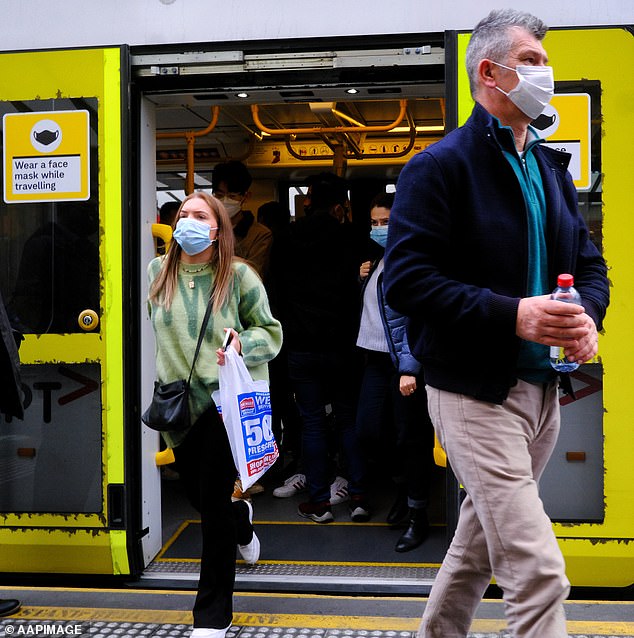 Commuters wear face masks in Melbourne on Monday, after it was revealed the state had identified new local Covid cases

‘Obviously we are going into a period where people spend more time indoors and are in closer proximity… We are three months, as we just heard, away from local community transmission.

There were hour-long delays at drive-through test clinics in Sandringham, Epping, Heidelberg, and Watirna, and 45minute wait times at the Banyule Community Health facility in Greensborough and at Monash University in Clayton.

By Monday night, wait times at the Hampstead Road Covid-19 testing site blew out to two-and-half hours as other testing sites remained open for longer due to the overwhelming demand.

Mr Foley stressed there are currently no plans for Melbourne to go into lockdown at this stage.

Anyone in Queensland who has been to one of the declared COVID-19 exposure sites in Victoria during the risk period specified will be required to quarantine.

From 1am Wednesday, anyone who enters Queensland and has been to any of the Victorian exposure sites at the time specified will need to quarantine for 14 days in government-arranged accommodation. 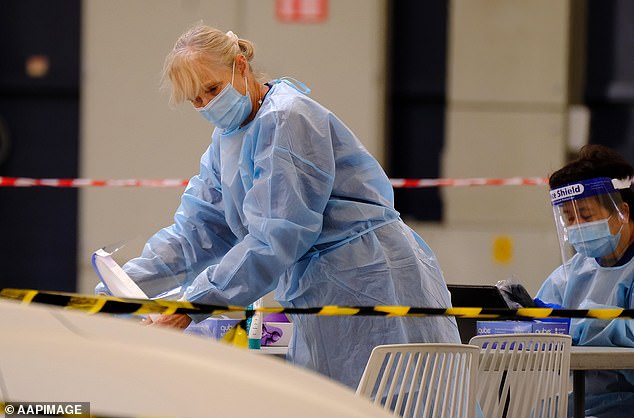 There were hour-long queues at drive-through test clinics across Melbourne on Monday. Pictured are health workers at Royal Melbourne Showgrounds

NSW Health is also closely monitoring the situation in Victoria.

Travellers arriving in Sydney from the Greater Melbourne area must complete a declaration which confirms they have not attended any of the potential exposure sites.

People who have been in the Whittlesea local government area in Melbourne’s north are advised to not visit residential aged care facilities, or hospitals unless seeking medical attention.