A 15-year-old boy who was born with a rare genetic disorder that would leave him blind met the woman who saved his life.

Anthony Dones, of Long Island, New York, was four months old when he was diagnosed with malignant infantile osteopetrosis (known as ‘stone bone’), a rare genetic disorder that makes bones prone to fractures and can cause bone marrow failure.

Doctors, who said Anthony would die if they didn’t find a stem cell donor soon, found an anonymous donor within 24 hours of his diagnosis.

Now, 15 years later, Anthony has finally met Patti and Sam Bosque, the mother and son who donated the umbilical cord blood that saved his life. 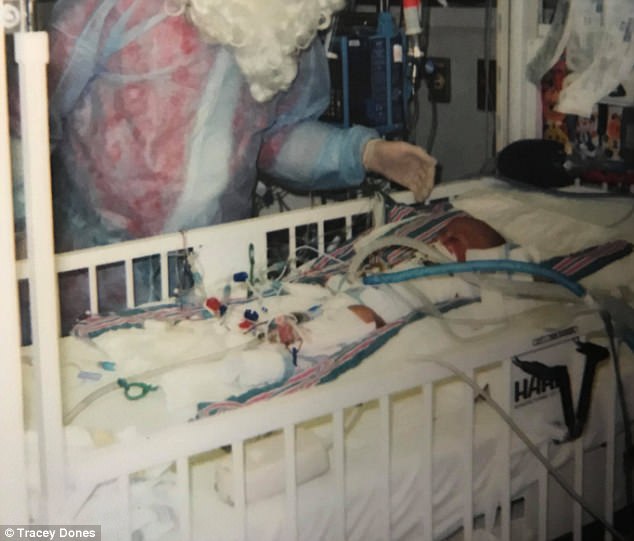 Anthony Dones was diagnosed with malignant infantile osteopetrosis when he was four months old. Pictured: Anthony in the hospital December 2002

‘After 15 years I always thought about who she is, what she looks like,’ Tracey Dones told Daily Mail Online. ‘She has no idea what she’s done for us.’

‘I remembered doing it for my daughter [Olivia, now 18]… and then my son was born two-and-a-half years later, but I don’t really remember anything,’ Patti said. ‘But Anthony was proof that I did.’

Tracey didn’t know her only son was sick until November 2002, four months after he was born, when he woke up one day vomiting.

She took Anthony to a pediatrician who noticed the then-four-month-old had an abnormally high white blood cell count – which usually signals that a person has an infection or a bone marrow disease.

Anthony was diagnosed with malignant infantile osteoporosis and doctors told Tracey he needed a blood transfusion to survive.

Malignant infantile osteopetrosis, which affects about one in 200,000 people, occurs when osteoclasts – cells that break down bone – do not work properly.

Osteoclasts constantly break down small areas of the bone so that they can be made again by cells called osteoblasts. In essence, old bones are breaking down to make space for new bones.

It makes bones prone to fractures, and can result in vision and hearing loss. The condition also affects bone marrow by significantly reducing the area in which its found and limiting its ability to create new blood cells.

If untreated, this can result in death due to severe anemia, bleeding or infections, according to Medscape.

It can take as ‘little as a few weeks’ and sometimes years to find a perfect match, according to officials at the National Marrow Donor Program. Tracey said doctors were able to find a donor for Anthony in within 24 hours of his diagnosis. 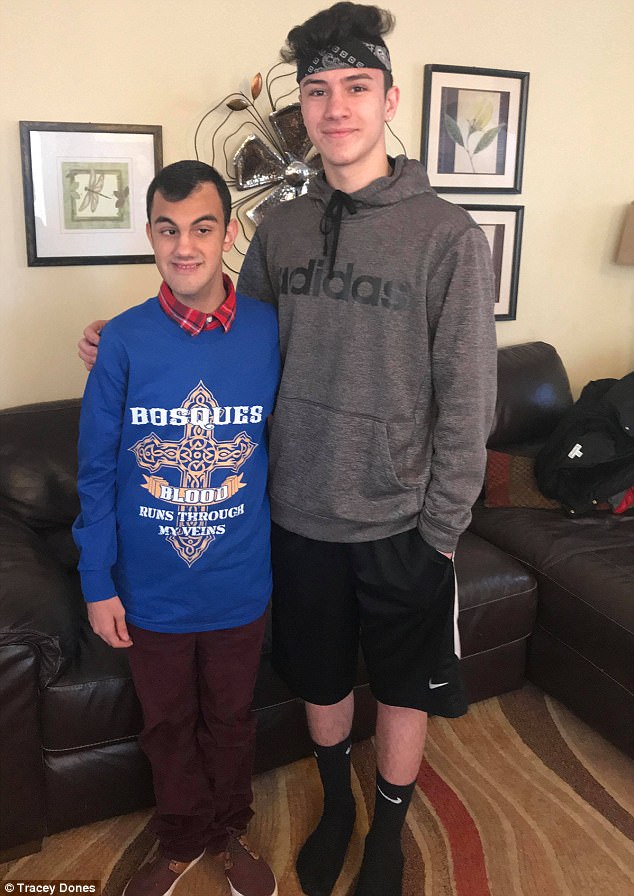 Anthony, left, and his donor Sam Bosque, right, finally met for the first time on January 14

Doctors had no luck finding a match through the National Marrow Donor Program. So they checked the New York Blood Center’s Cord Blood Program, a public bank for donated umbilical cord blood and found an anonynmous

A month later, doctors performed a stem cell transplant on Anthony, a procedure that saved his life.

‘I’m overwhelmed. It’s very overwhelming,’ Patti told ABC News. ‘When I donated the cord blood, I thought it was going to be used more for research. I certainly didn’t think it would have such an individual impact on one person.’

Fast forward to November 2017, when Tracey got the results of Anthony’s Ancestry DNA test, a genetic test that gives people clues about their family history, and noticed something interesting.

Tracey also noticed that he genetic test, which also matches people to those they might be related to, listed another woman as his mother.

After speaking with Ancestry DNA, Tracey said she realized that the test was picking up on the DNA from her son’s donor and decided to reach out to Patti Bosques in Lindberg, New York.

‘I did not set out to meet my son’s donor,’ Tracey explained. ‘It was purely by accident. I knew it was a completely anonymous donation and I was fine with that.’

Tracey tried reaching out to Patti through the Ancestry DNA website, and then she reached out to her on Facebook.

‘I saw a picture of [Patti’s] son on her Facebook Page and I immediately knew by looking at this boy, that this was my son’s donor,’ Tracey said.

The two decided to meet for the first time on January 14 at Patti’s home.

‘It was very exciting for me,’ Tracey said. ‘I don’t think she understand the magnitude of what her decision [to donate her son’t cord blood] did.’

Tracey and Patti said they hope the two families can continue a relationship.