The same old engagement photos can sometimes can a little boring which is why one New York couple decided to take an alternate approach and have some fun with their photo shoot.

Jackie Nguyen and Nate Huntley of Queens, New York, describe themselves as ‘huge nerds’ who look for an excuse to be a bit kooky. And what better way to celebrate their unique sense of humor than by dressing up as their favorite pop-culture power duos.

The pair, who are both actors, had some help from their photographer friend, Isaac James and over a period of months, paid tribute to iconic couples from movies such as Marty McFly and Doc Brown from Back to the Future and Marv and Harry from Home Alone – Isaac also took more ‘traditional’ engagement photos of the couple well.

Jackie told the Huffington Post: ‘Nate and I are huge nerds. We are completely obsessed with the majority of couples we paid tribute to and have a genuine love for being a bit kooky.’

The couple bought their costumes from thrift shops and borrowed from friends who had a lot of props on hand for Jackie and Nate to use.

And of all the costumes, Jackie’s favorite was Harry and Marv from Home Alone and Home Alone 2 as they are two of her favorite movie and Nate’s was Jack and Rose from Titanic because it was a dramatic but hilarious shot to get.

They are now planning their wedding which will be in Columbus, Ohio, come April and much like their engagement shoot, the occasion will be one filled with laughter and fun.

Jackie said: ‘We have the most outlandish and fun things planned for the wedding, some of which are surprises that we can’t reveal. What we can say is that it is a Chex Mix of Willy Wonka meets Christmas meets a magical carnival.’ 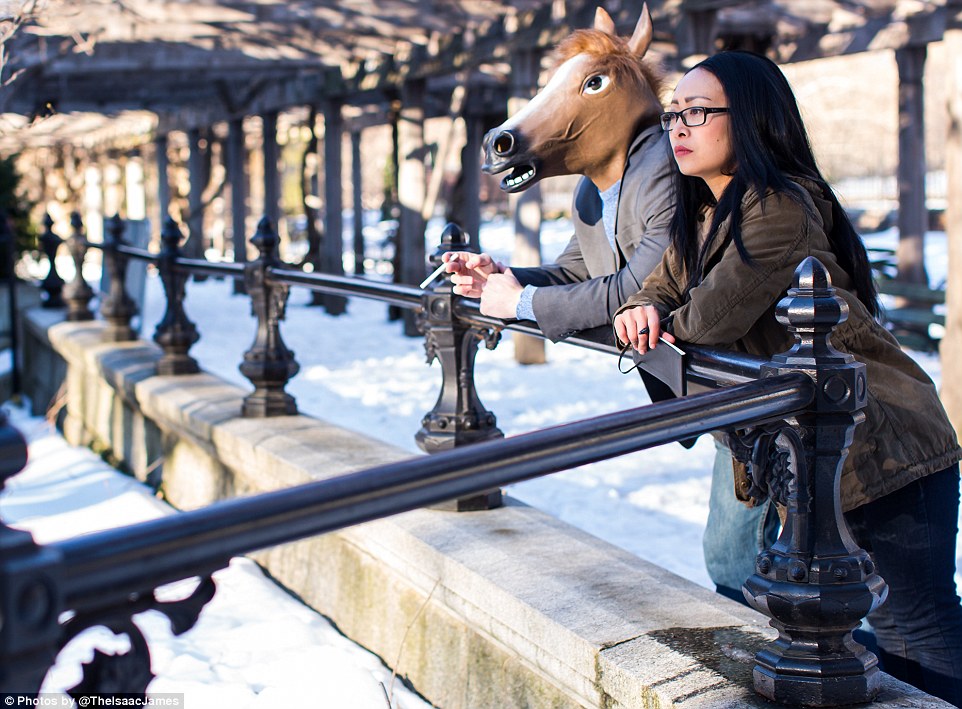 In character: Jackie and Nate acting as BoJack Horseman and Diane Nguyen look into the distance while still maintaining character 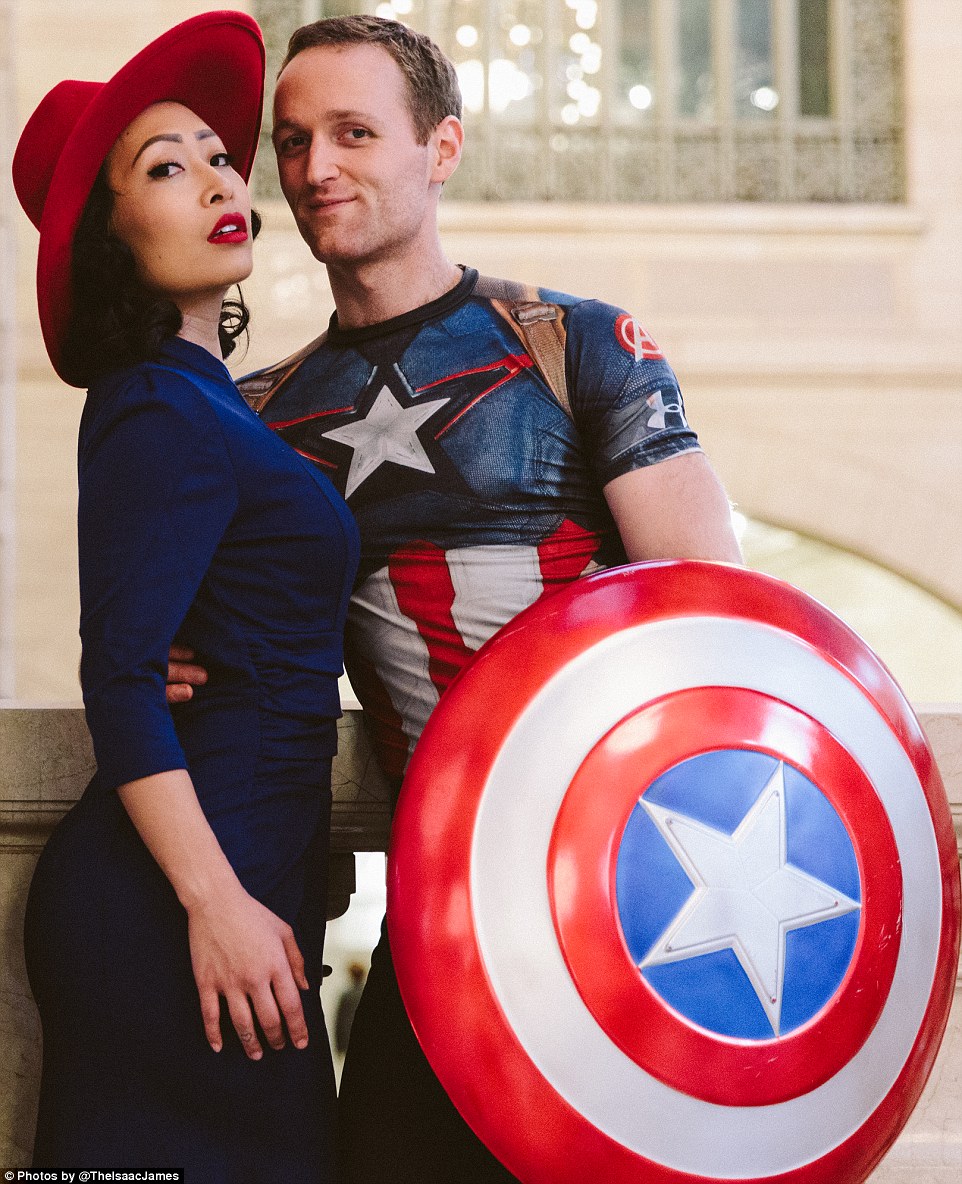 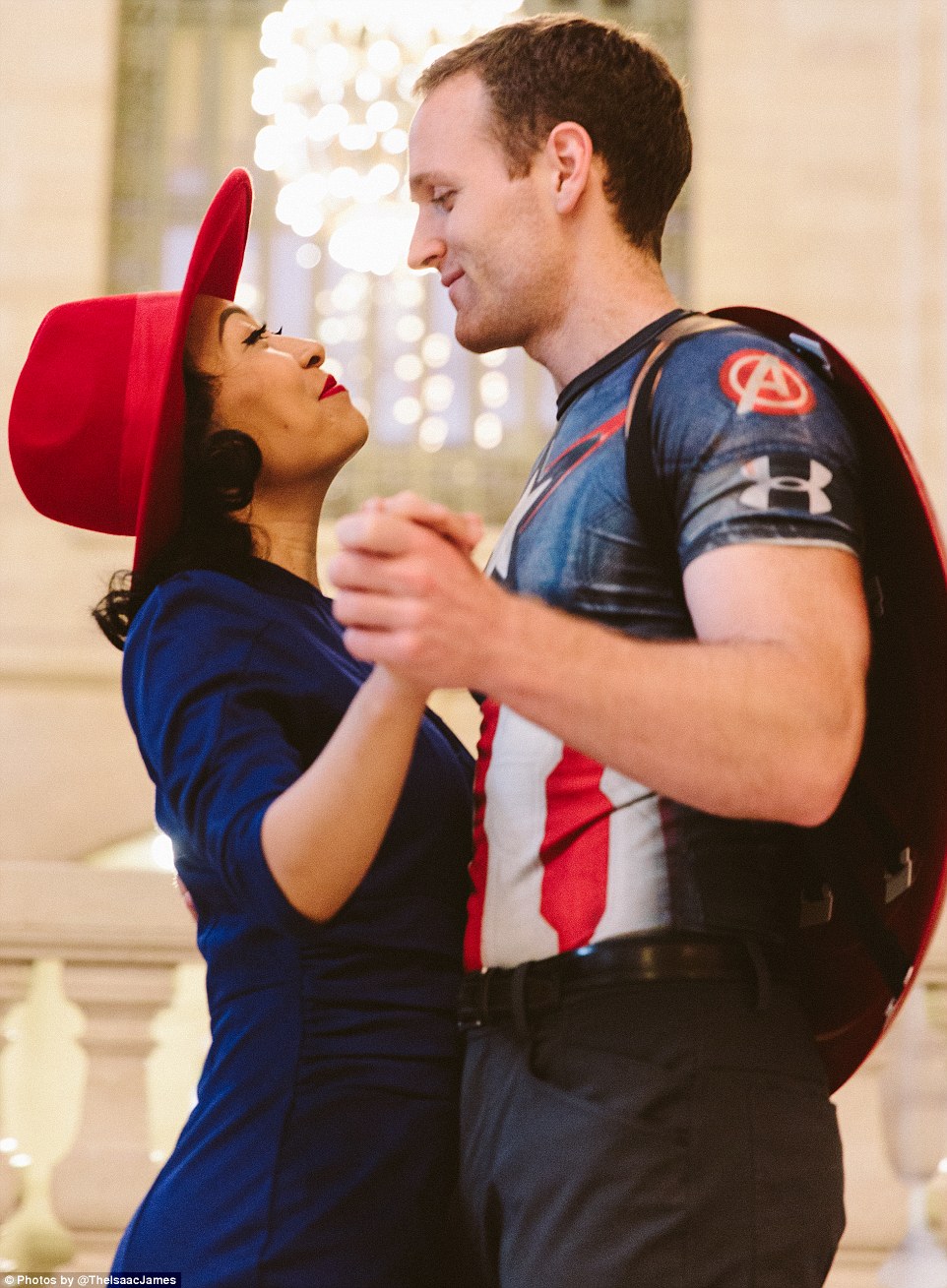 Lovebirds: The engaged couple hold hands and look at each other while cosplaying as Peggy and Captain America 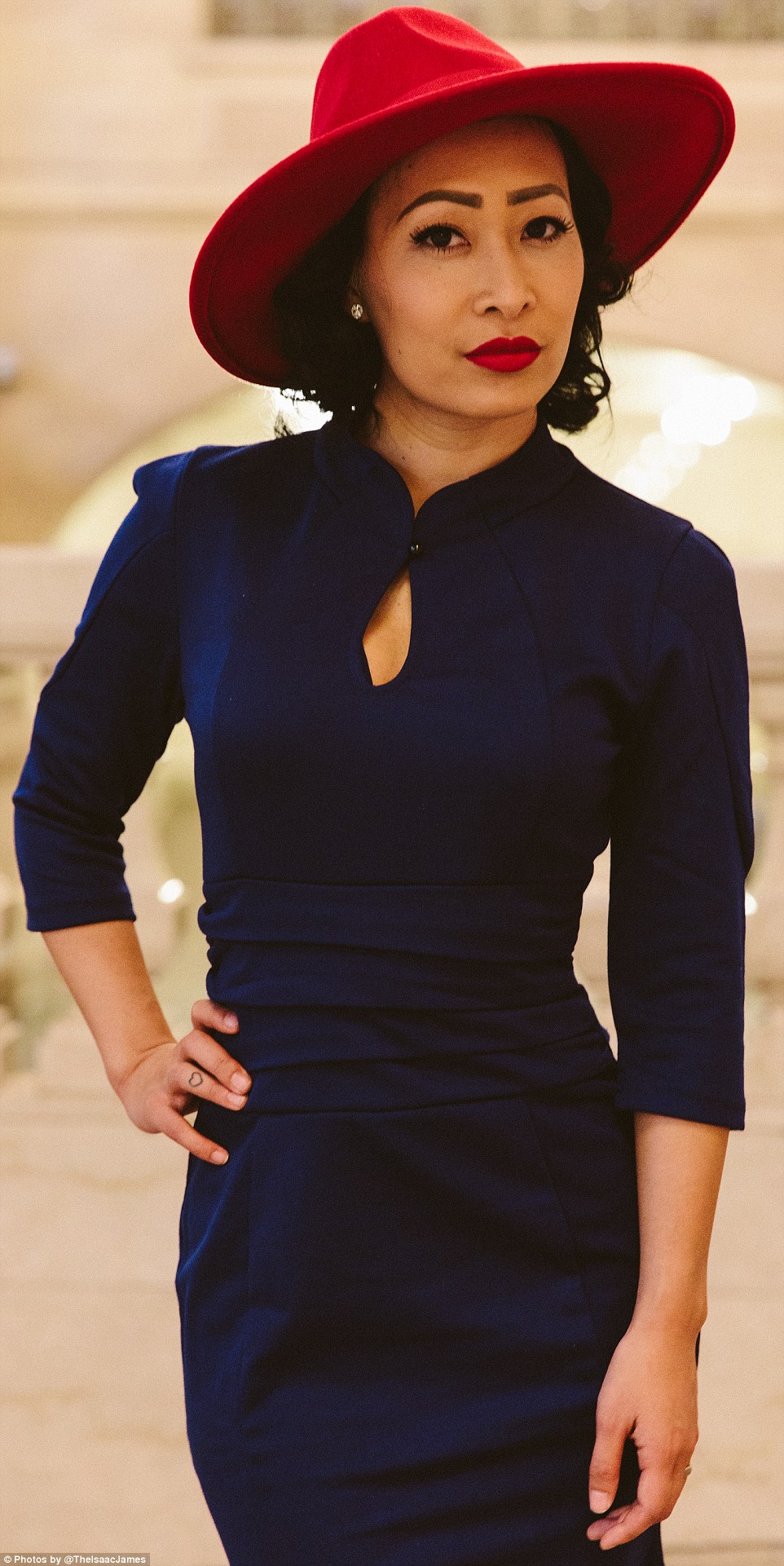 Model pose: Jackie does a solo shot as Peggy Carter wearing a form-fitting blue dress and red hat and lipstick 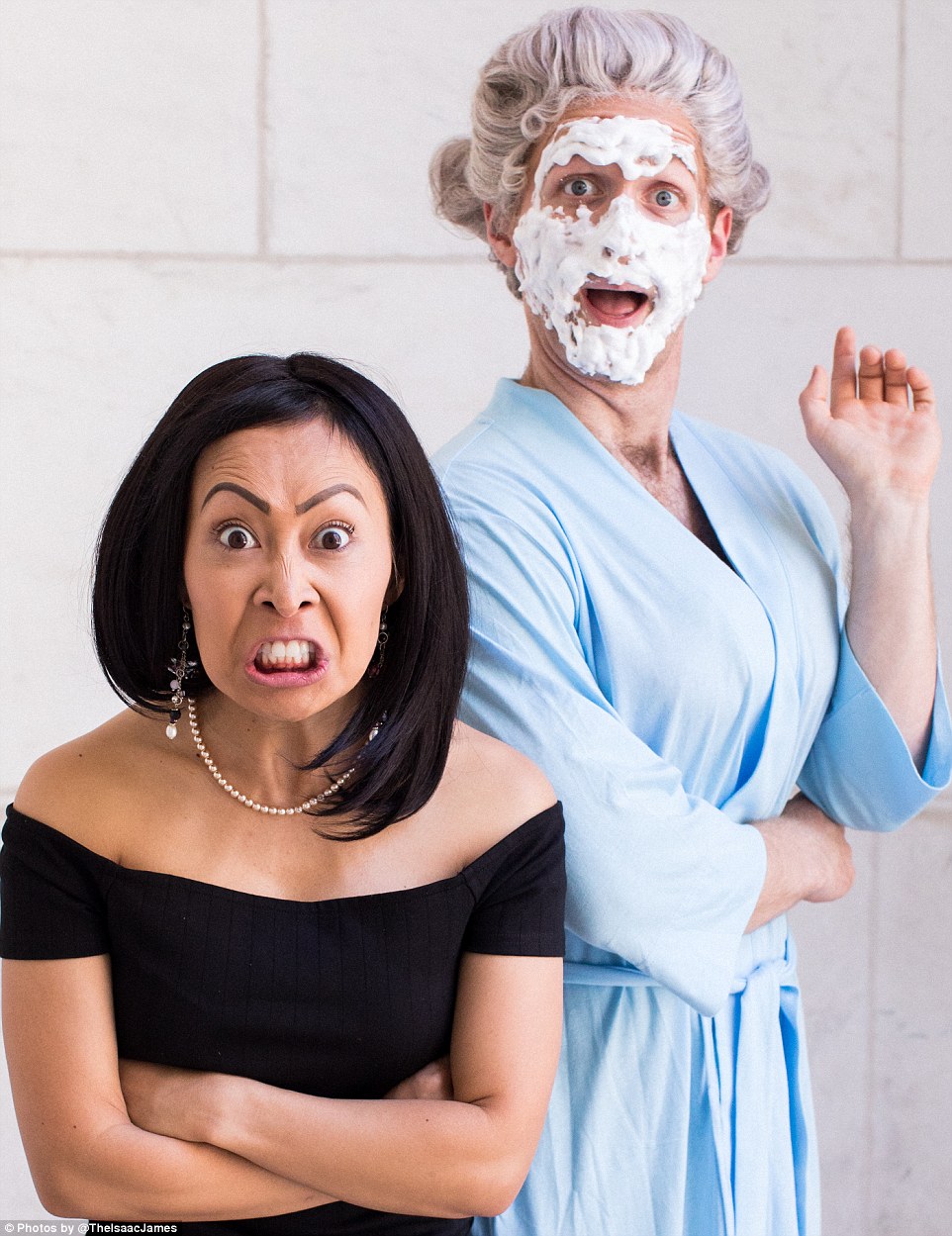 Iconic scene: Jackie and Nate reenact the iconic scene in Mrs Doubtfire when Robin Williams’ character dumps her face into a icing-covered cake 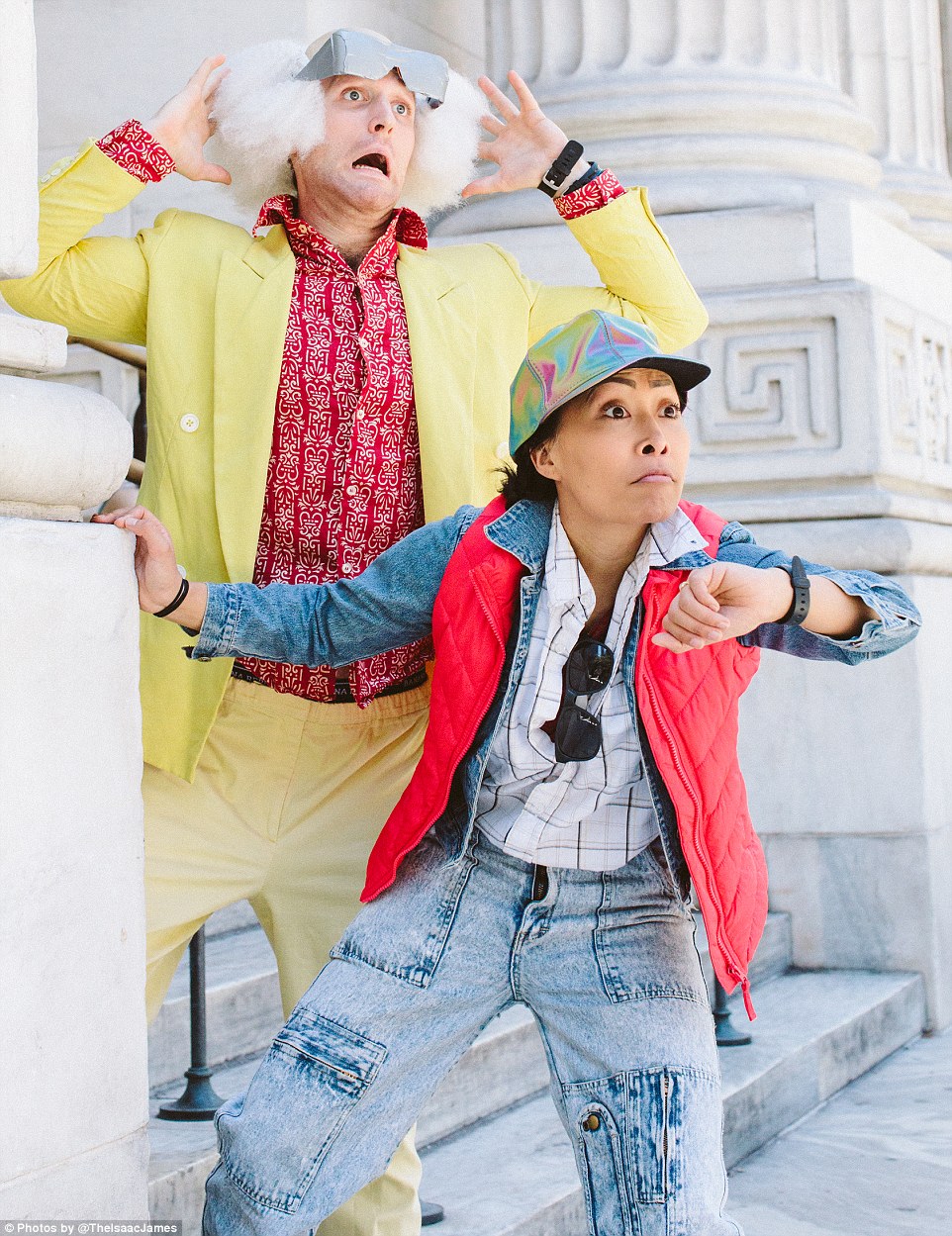 Back to the Future: The couple double as Marty McFly and Doc Brown from the well known 80s movie franchise 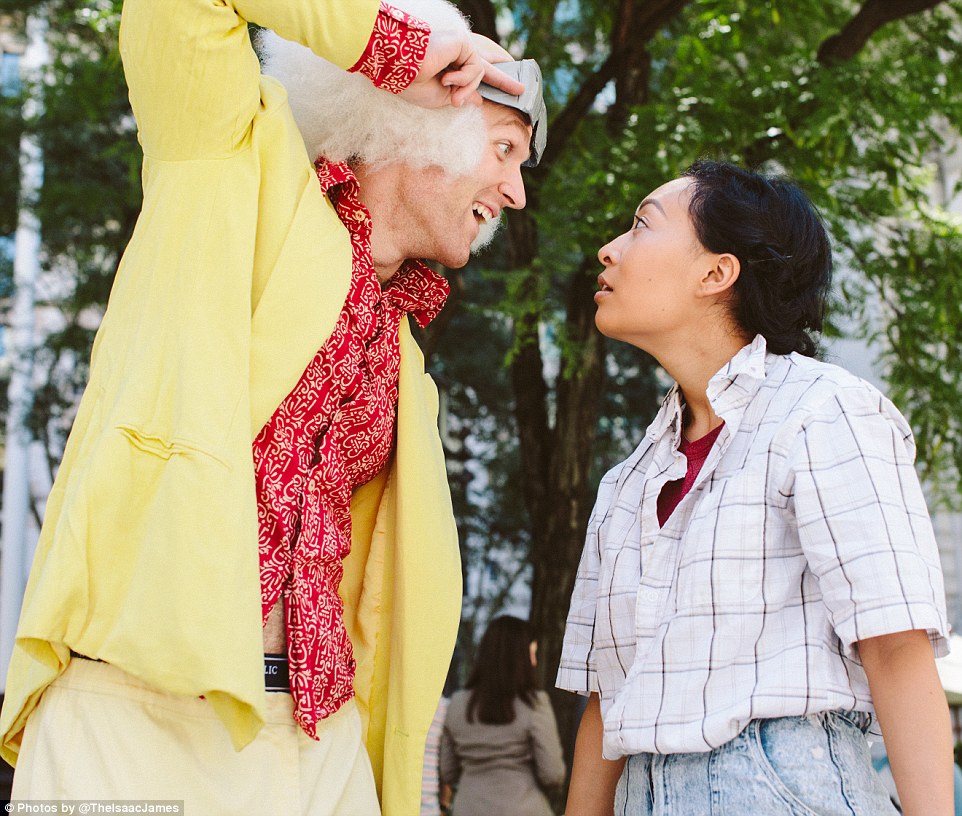 The perfect pair: The couple did multiple shoots for this cosplay and got some pretty authentic photos from it 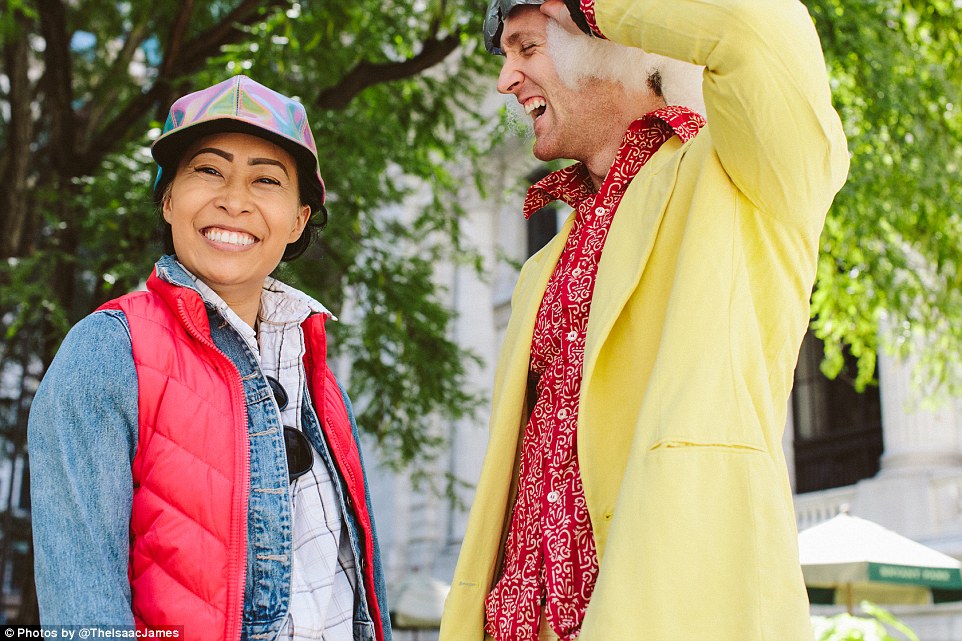 Better together: The couple clearly had a lot of fun together for their cosplay engagement photos 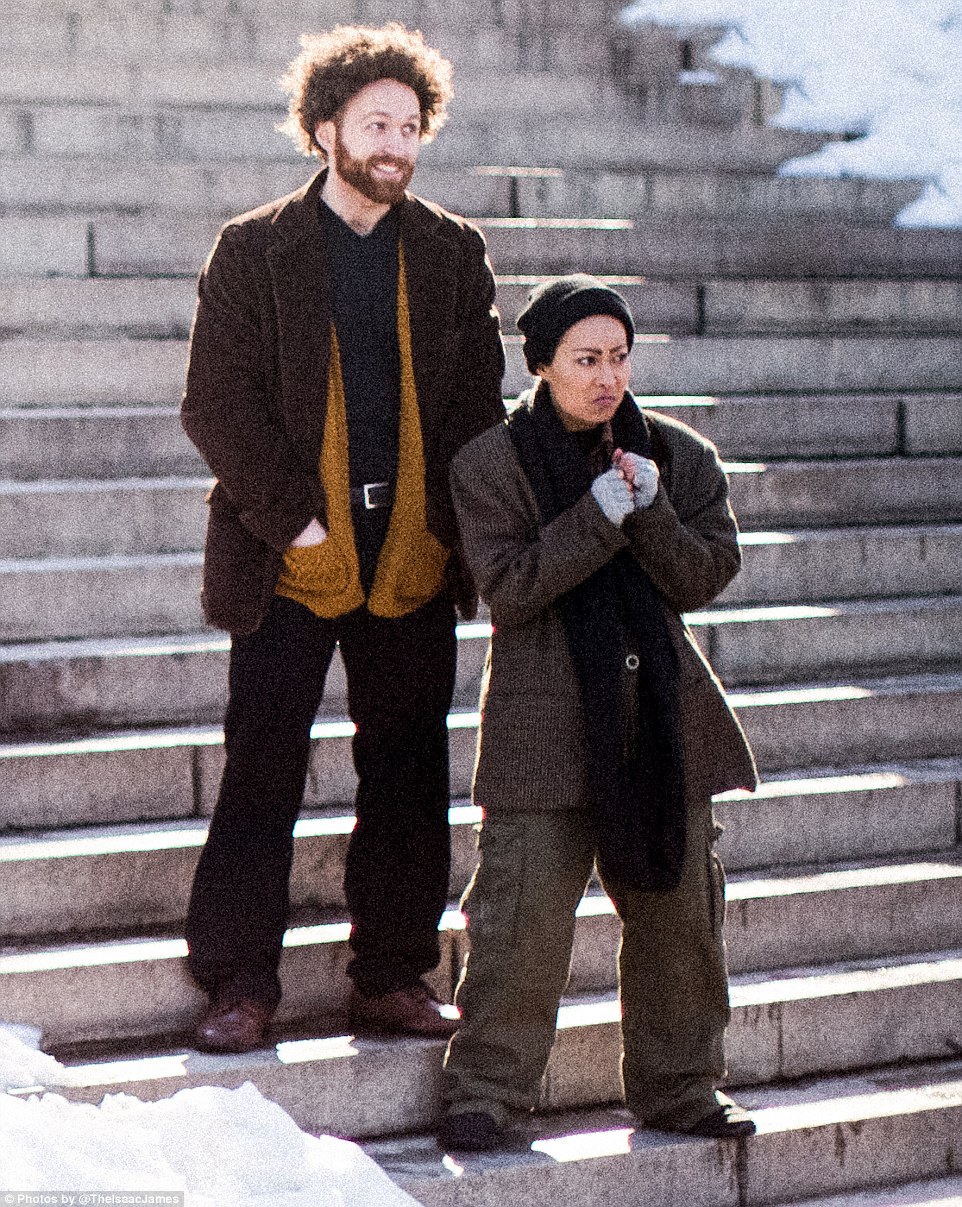 Marv and Harry: The duo also did a lot of photos for the Home Alone photo shoot as Home Alone and Home Alone 2 are two of Jackie’s favorite movies 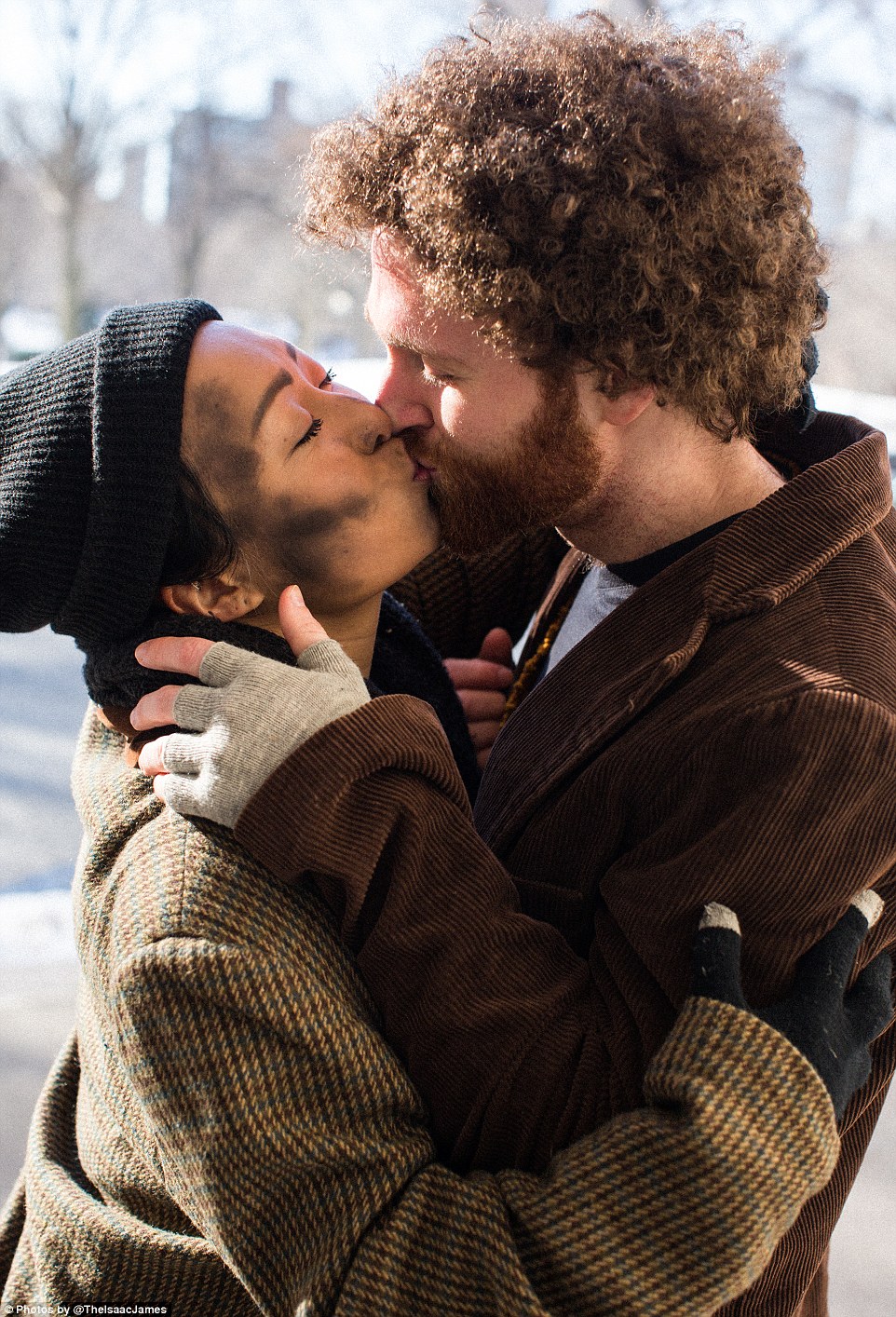 Kissing bandits: They may not have stolen anything from any unoccupied homes but they did steal each other’s hearts 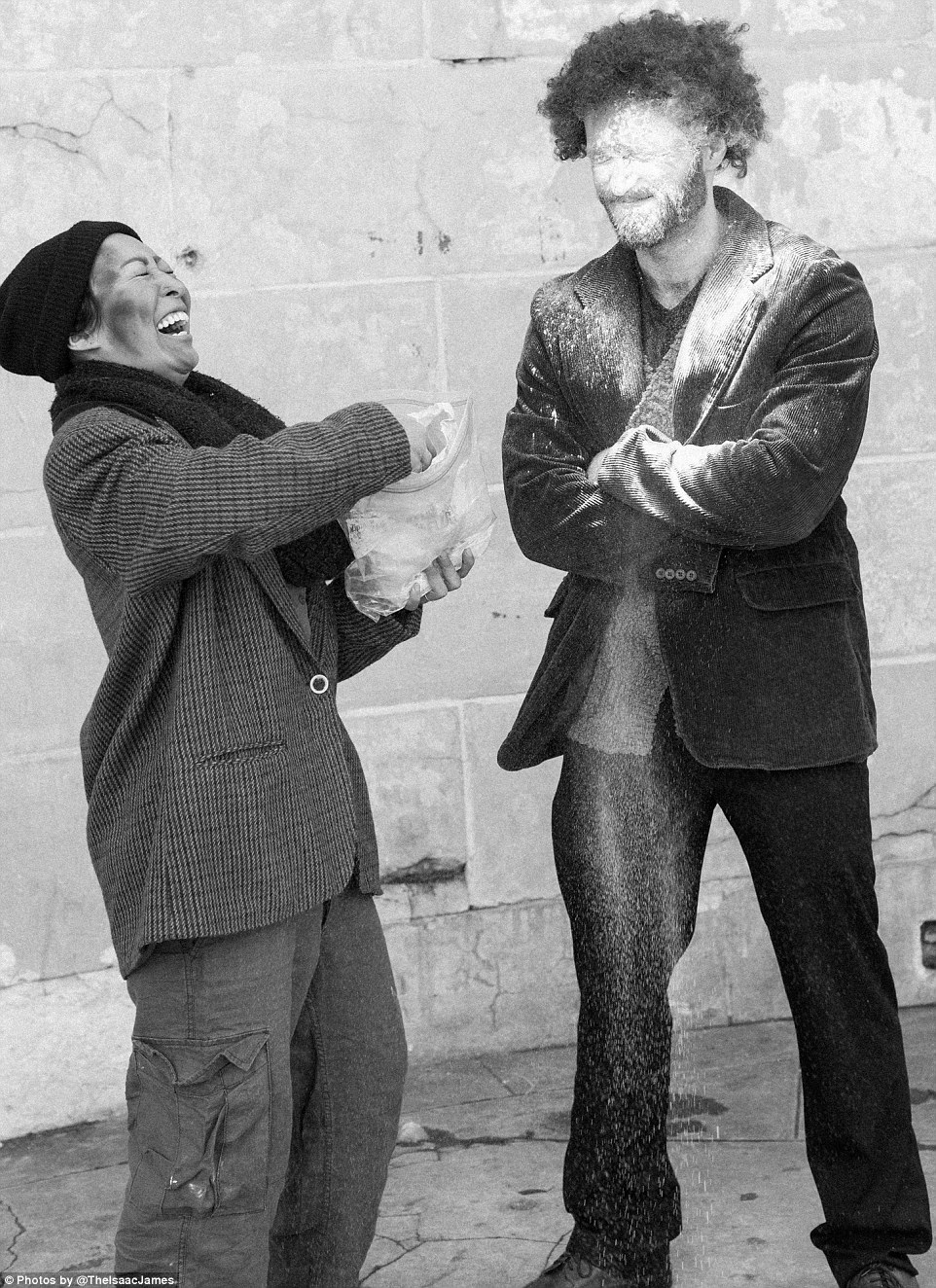 The perfect scene: The couple even act out the iconic scene when Marv gets power on his face 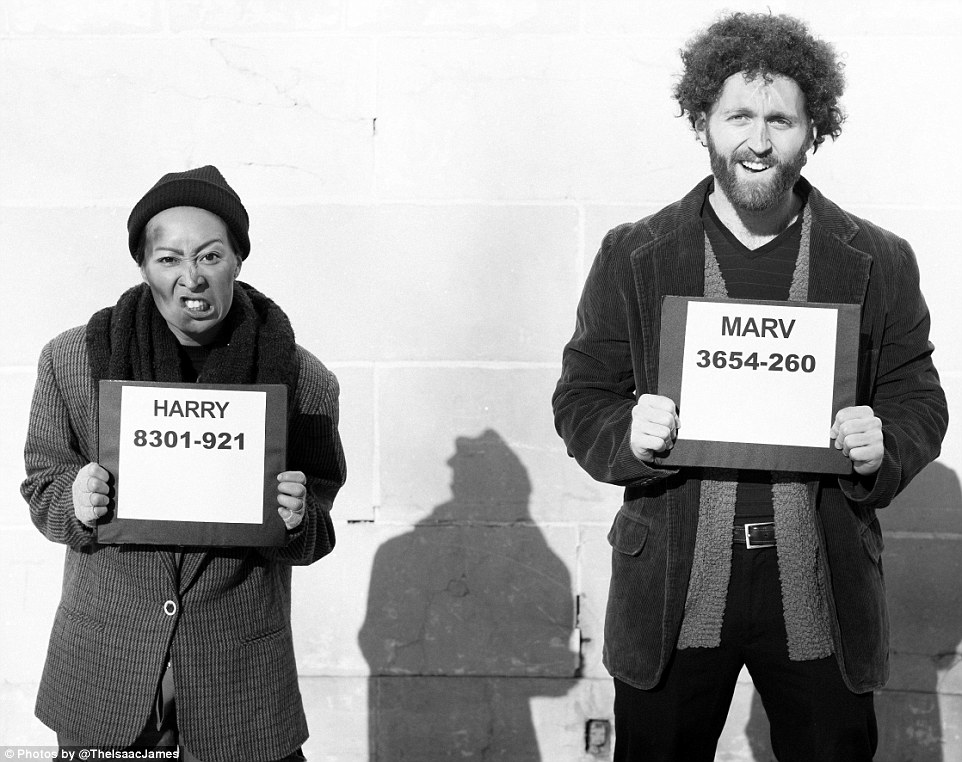 Mugshots: They even did a black and white mugshot photo shoot with their character names. Jackie even took the liberty of doing a silly face 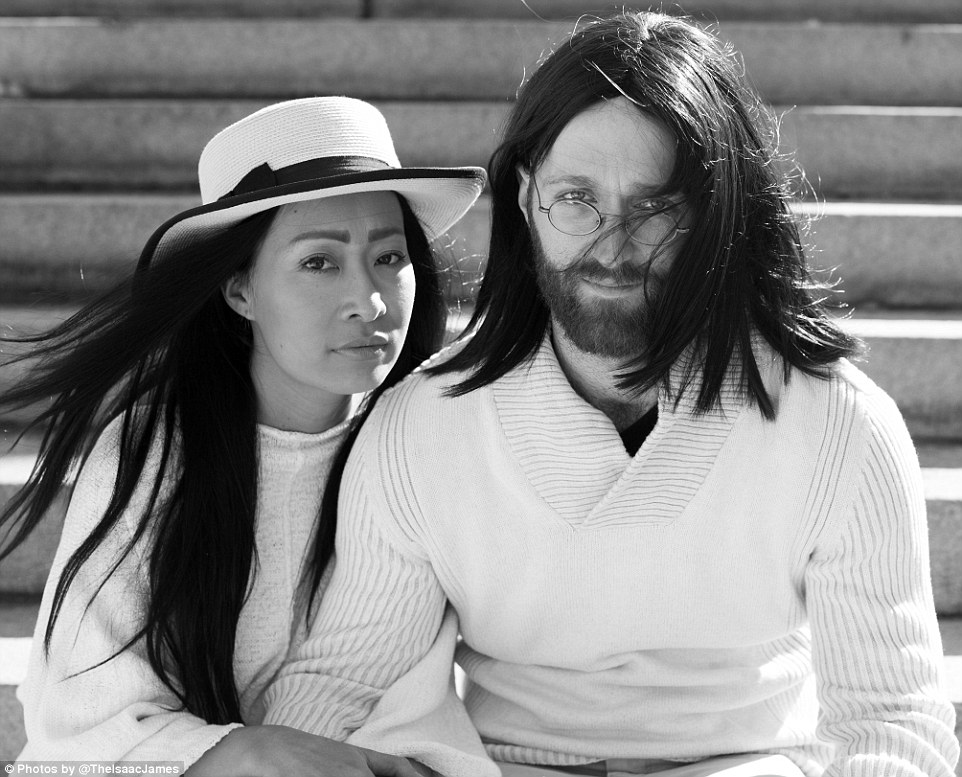 All you need is love: Jackie and Nate cosplay as historic couple Yoko Ono and John Lennon 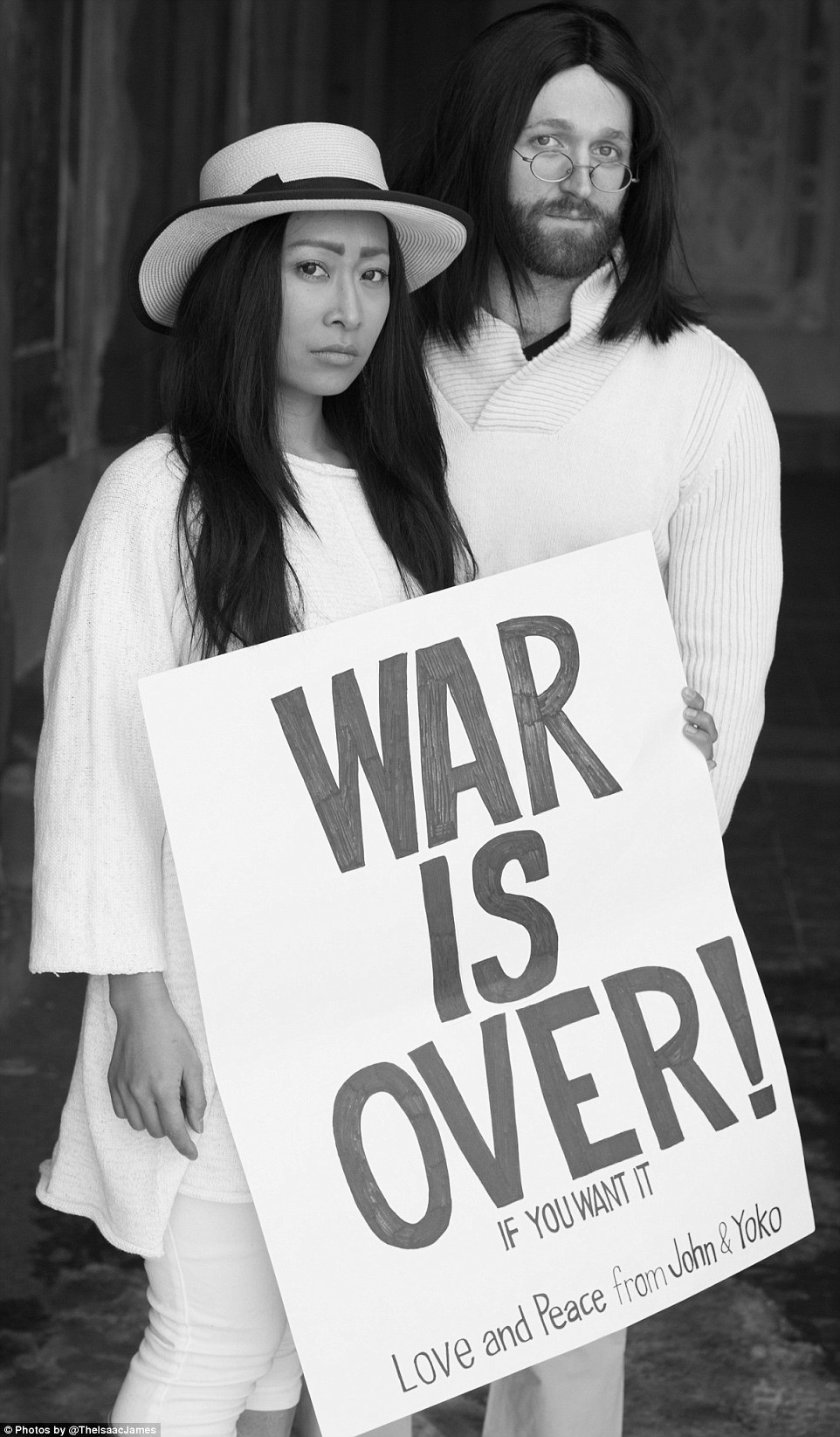 Love and peace: The pair even added a prop to their well-planned costume which included a ‘war is over’ poster 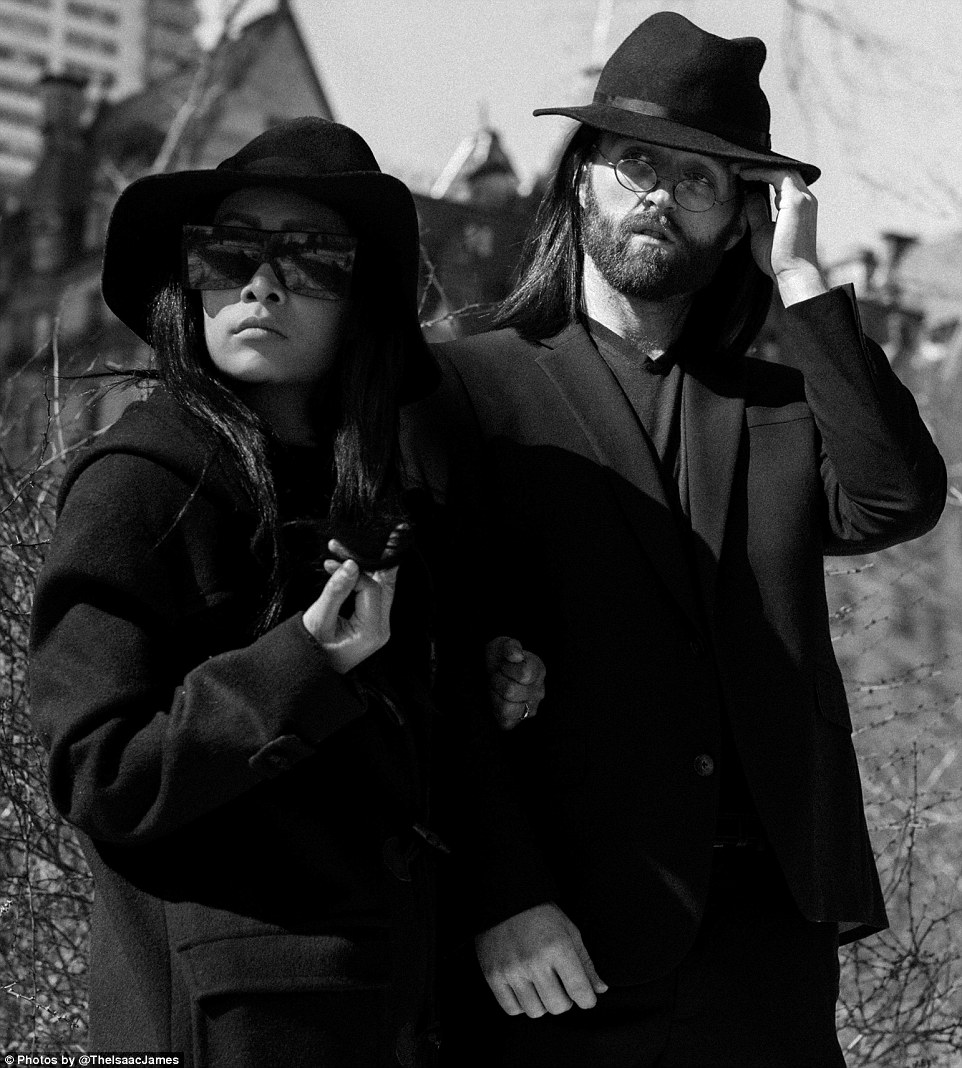 Lovebirds: The pair both describe themselves as ‘kooky’ which is evident even in their non-cosplay engagement photos 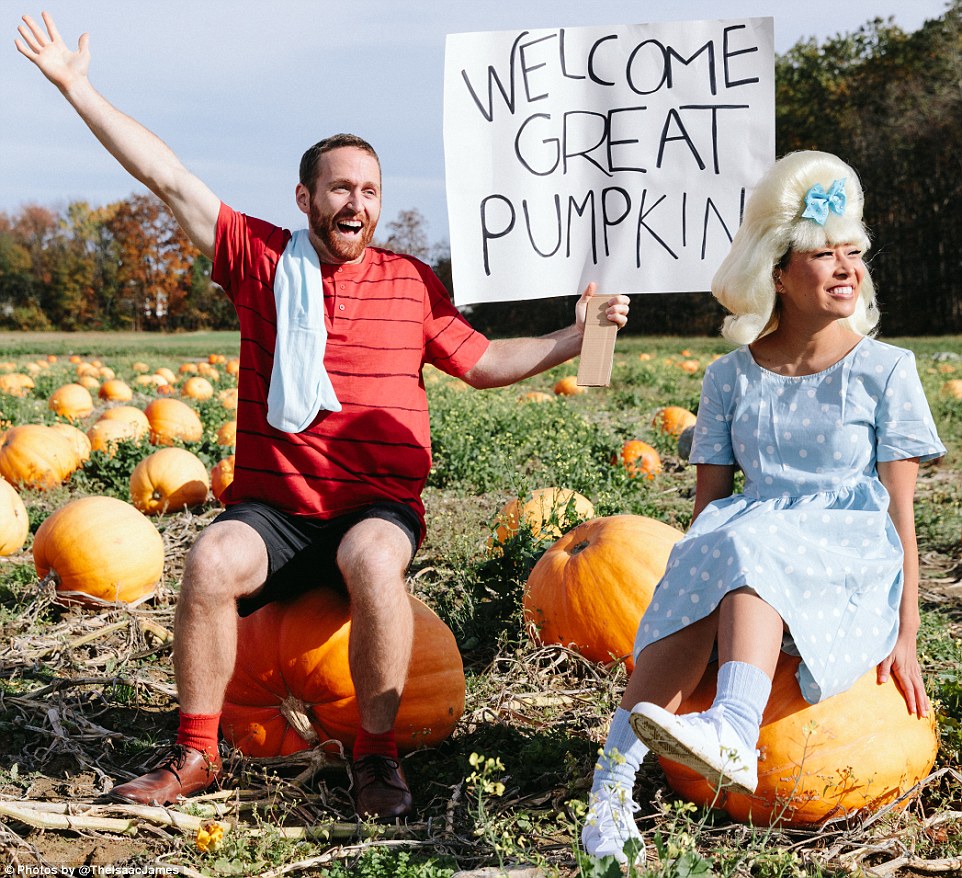 Young at heart: The couple cosplay as children’s movie characters Linus and Sally from It’s The Great Pumpkin, Charlie Brown 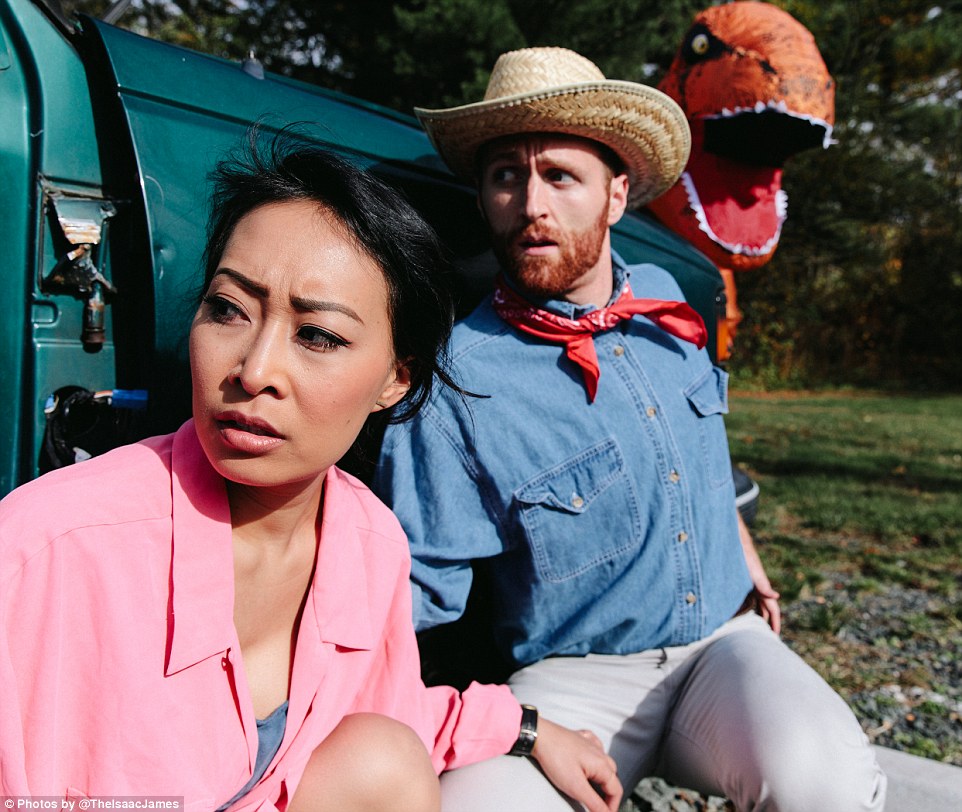 Perfect acting: During a Jurassic Park cosplay, Jackie and Nate are on lookout while the dinosaur can be seen in the frame behind them 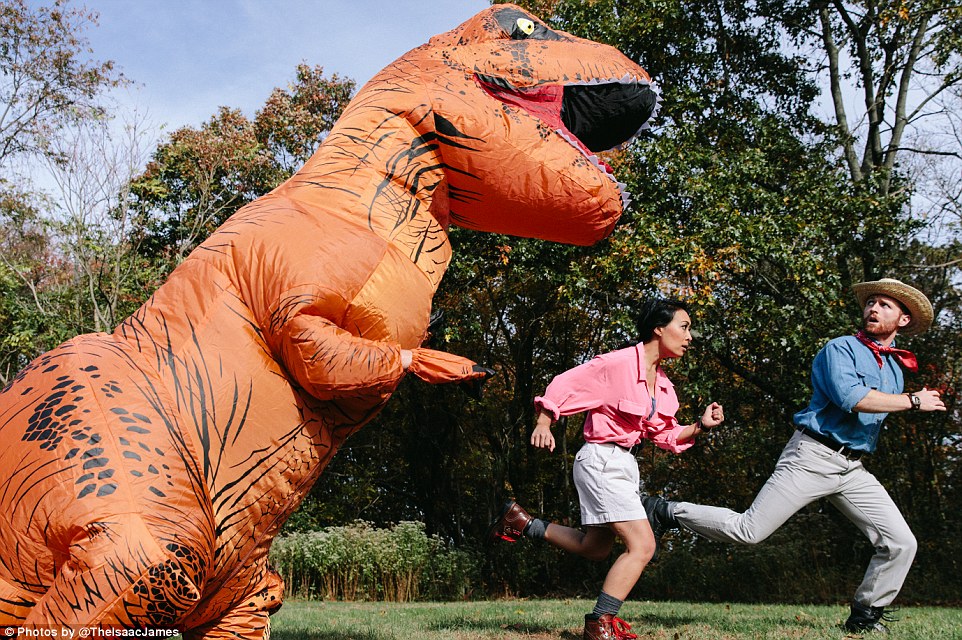 Running for their lives: The couple did an action shot while running away from a dinosaur during a Jurassic Park cosplay

Jurassic Park: Jackie and Nate did a Jurassic Park cosplay and got one of their friends to be the designated dinosaur 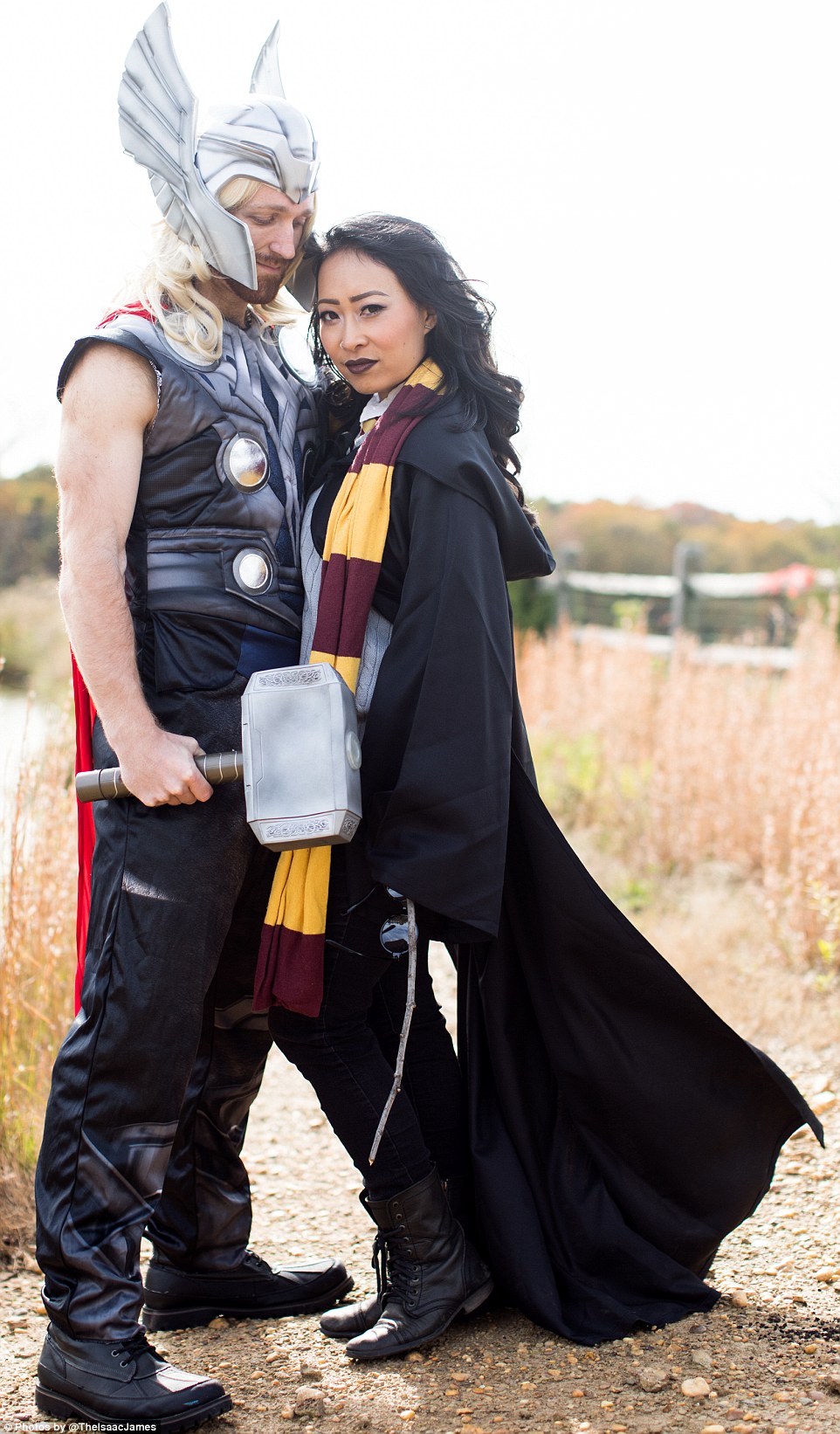 Thor and Harry: Although the characters are unrelated, Nate and Jackie still wanted to get a snap of the iconic pair together 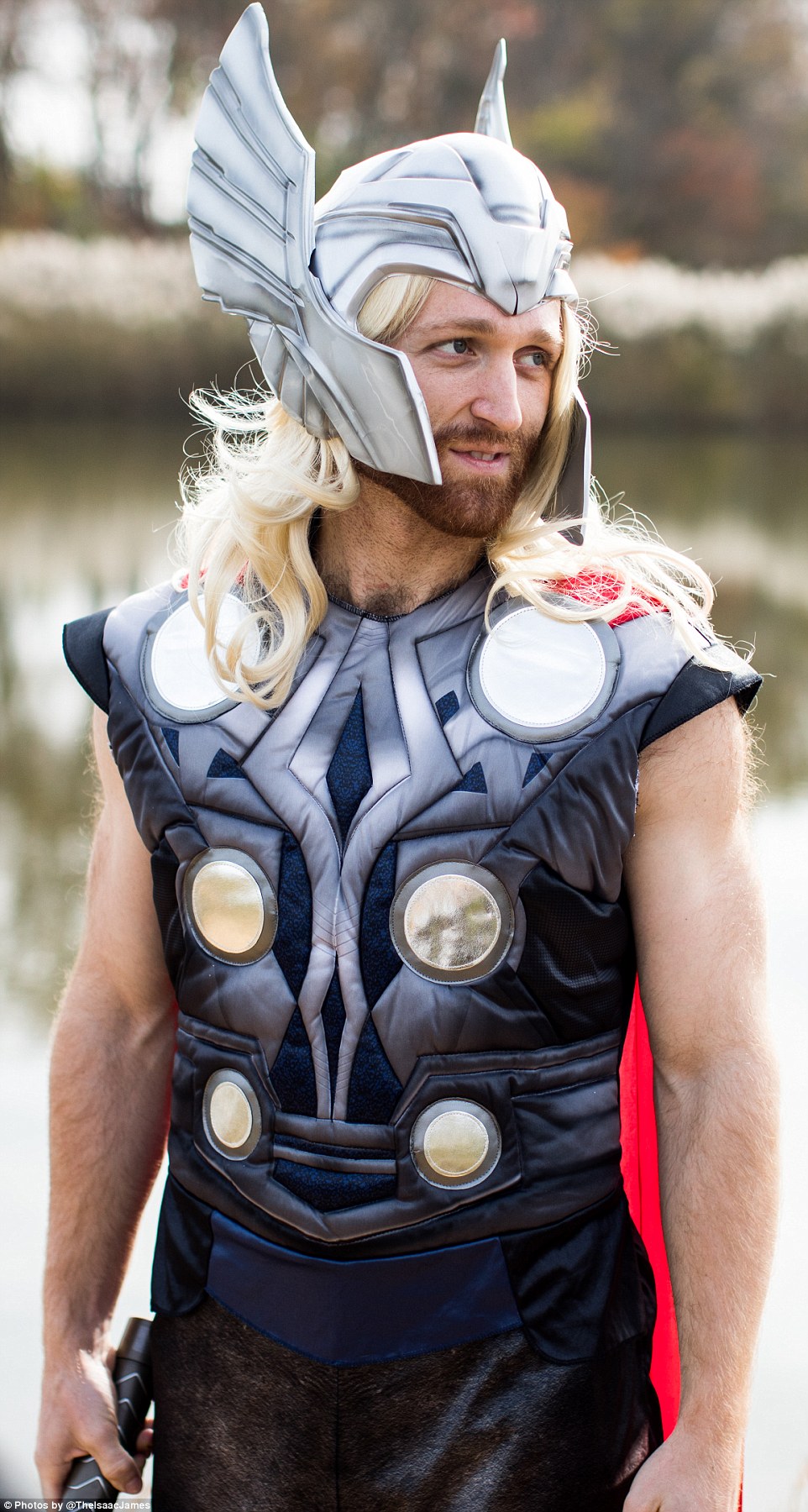 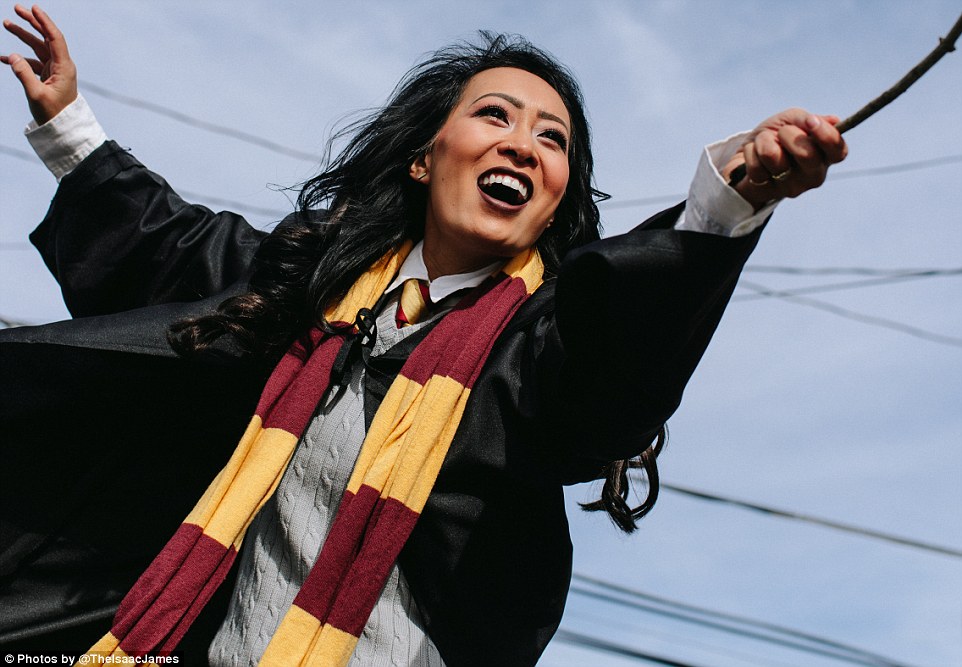 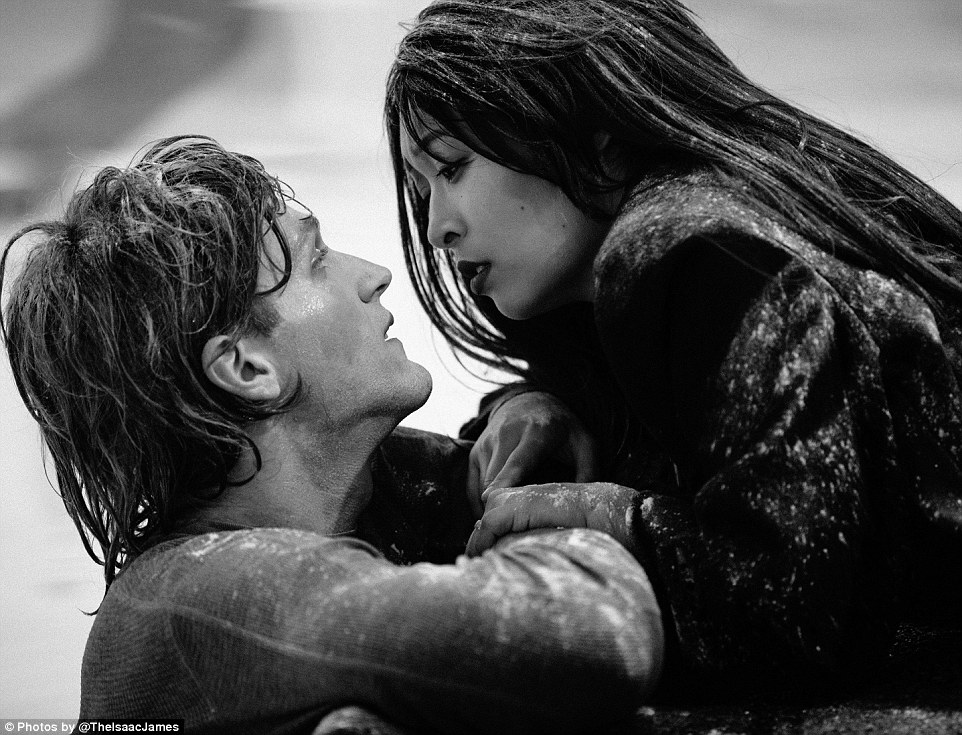 Don’t let go: Nate’s favorite costume was Jack and Rose from Titanic because because it was such a dramatic and hilarious  shot to get 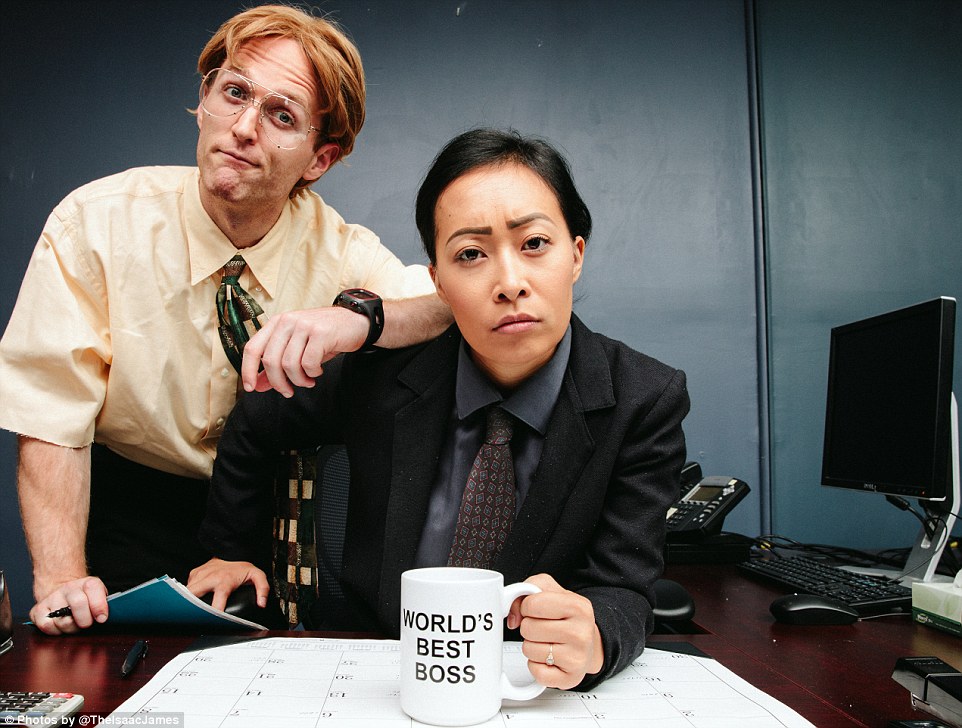 The Office: Nate and Jackie dressed up as Michael Scott and Dwight Schrute from comedy series The Office 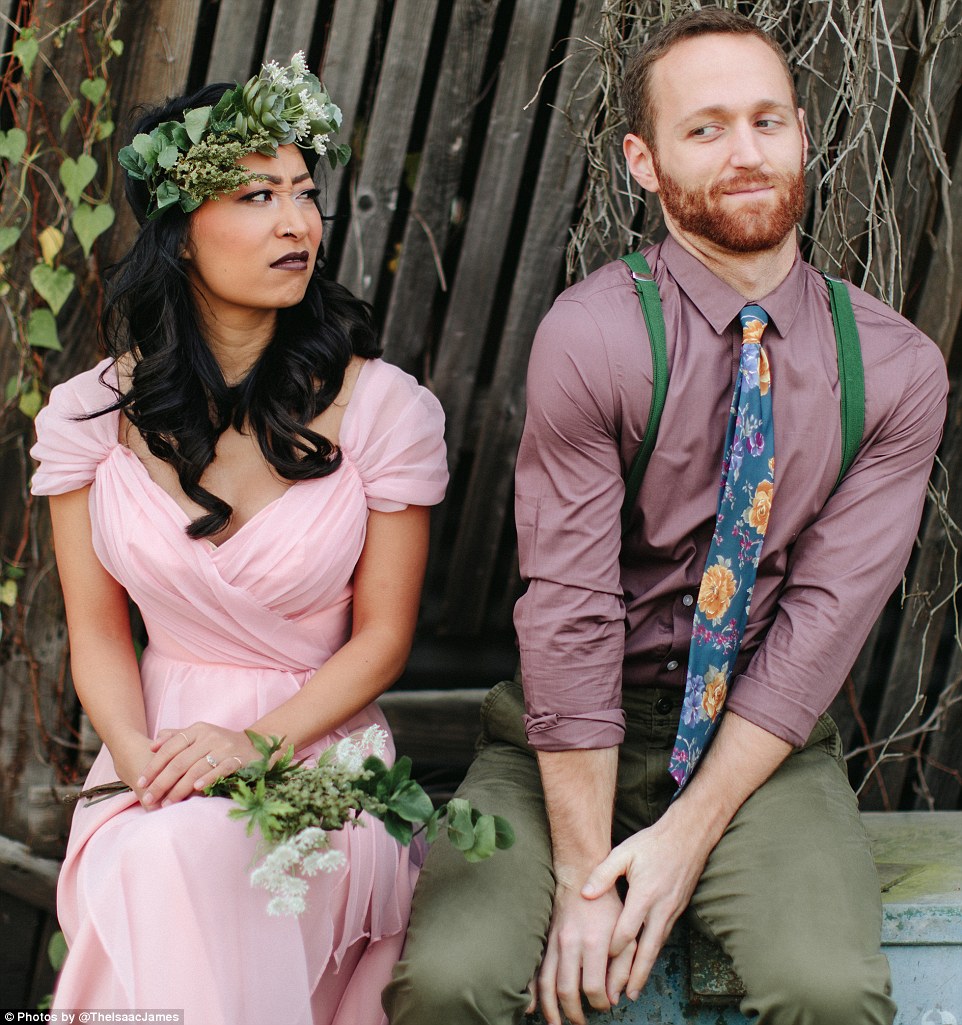 Wedding planning: They are now planning their wedding which will be in Columbus, Ohio, come April 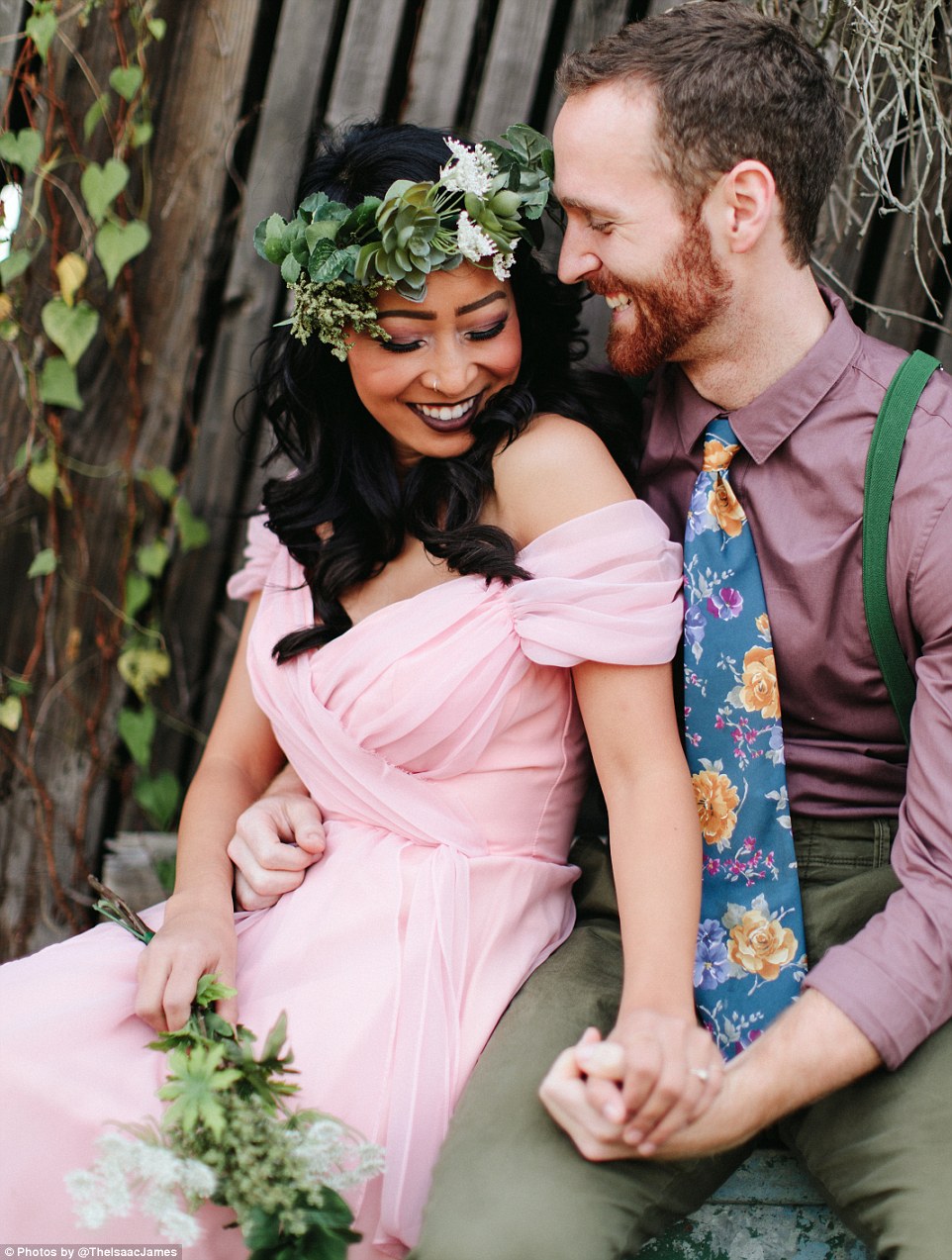 Kooky couple: Jackie and Nate also had Isaac take ‘traditional’ engagement photos of them as well