New York From The Air: Photobook takes readers on a ‘breathtaking journey’ across an iconic skyline

From a ‘Manhattanhenge’ sunset to ‘Ghostbuster’ storm clouds: Book presents stunning aerial images of New York by a former photographer for a helicopter tour company

By Lucy Lovell For Mailonline

Despite being one of world’s most photographed cities, New York’s iconic skyline still holds unseen secrets – as this breathtaking new book shows.

With over 200 pictures taken from both helicopter and rooftop vantages, New York From the Air by Paul Seibert takes viewers on a ‘breathtaking journey’ of ‘unique and unmatched aerial vistas’, say the publishers.

Mr Seibert, a lifelong resident of New York and an award-winning photographer, decided to write the book after two years working as the official photographer for a helicopter tour provider.

He says: ‘In the years since, my passion only grew stronger. I pushed myself to find new compositions, and was afforded ample opportunity to understand where the light would be to create dramatic and engaging images.

‘New York is known for its unapologetic attitude and brashness. However, over the years I have seen architectural details that suggest there is a fineness and delicacy to these creations. Finding and sharing these lesser-seen details has become somewhat of an obsession for me.’

Incredible ‘Ghostbuster’ clouds [familiar to anyone who’s seen the 1984 movie] cast a threatening shadow over the city in this captivating picture. Entitled The Storm, this was taken one hour and two minutes before sunset, at an altitude of 1,100ft (335m), writes Seibert 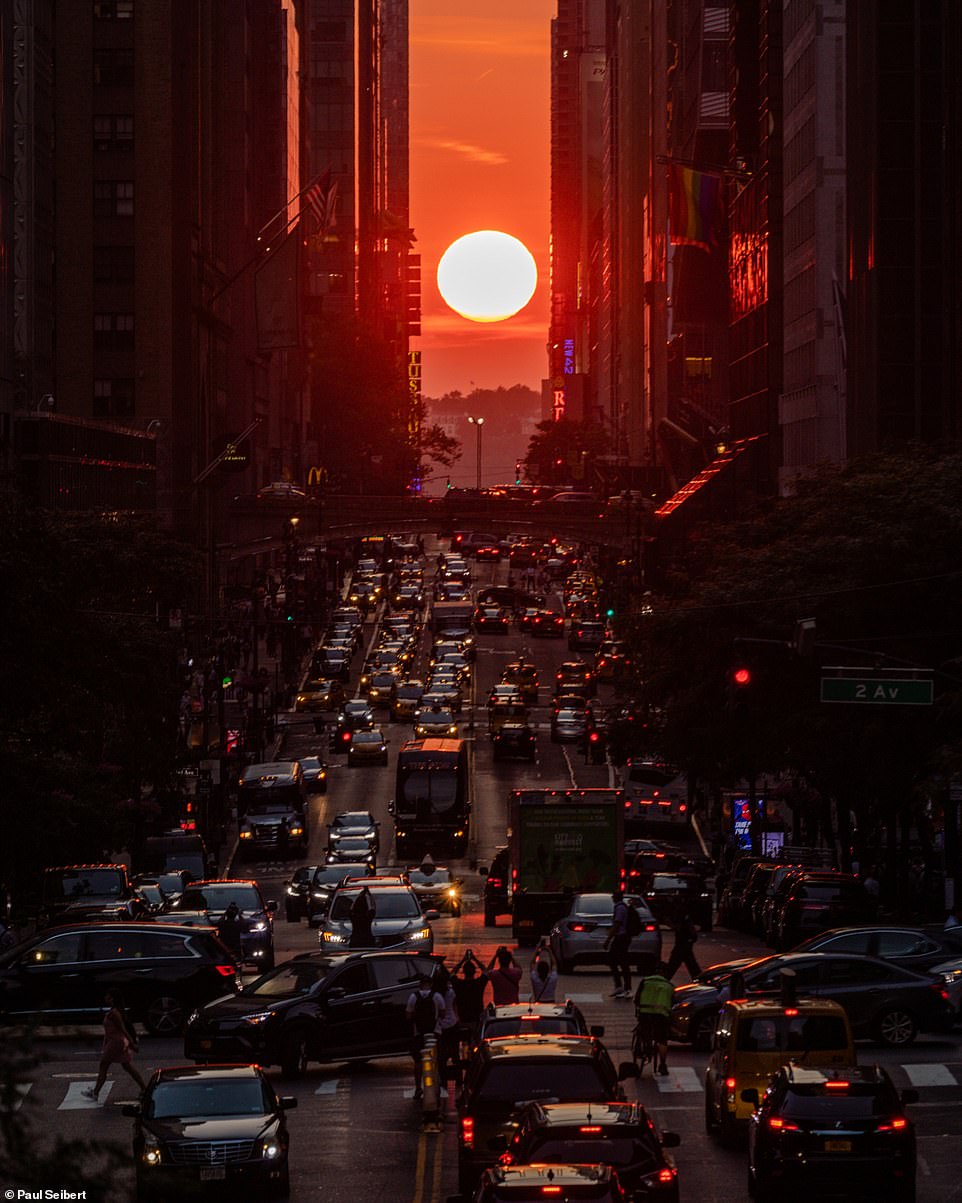 Here, Seibert captures the spectacle known as Manhattanhenge – a twice-yearly event when the setting or rising sun perfectly aligns with the main street grid of Manhattan, and casts a warm amber glow over the thoroughfares. The picture was taken nine minutes and 24 seconds before sunset at an altitude of 38ft (11.5m), writes Seibert 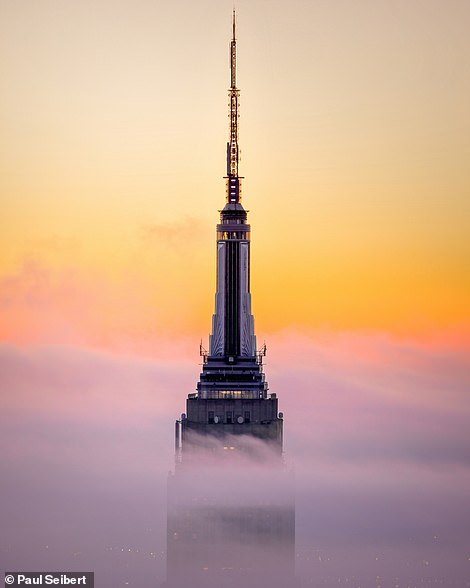 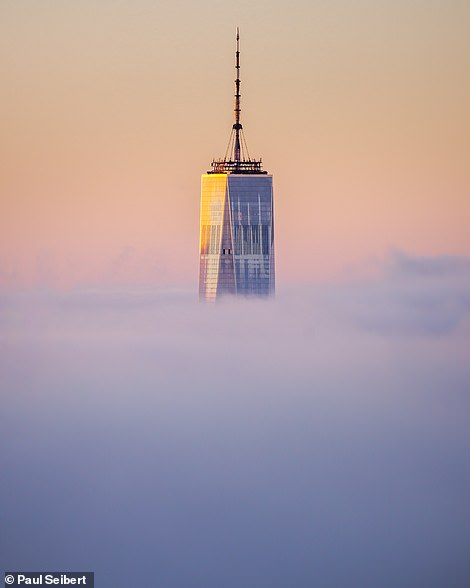 LEFT: The tip of the Empire State Building – the tallest building in the world until 1971 with a total height of 1,454ft (443.2m) – bursts through the clouds. The picture was taken looking east over the city, says Seibert, 13 minutes and 16 seconds before sunrise, at an altitude of 1,150ft (350.5m). RIGHT: The pinnacle of One World Trade Center – which measures a breathtaking 1,776ft (541m) – is pictured here surrounded by thick clouds. The photo was taken seven minutes and 54 seconds after sunrise, at an altitude of 1,150ft (350.5m), notes Seibert

The iconic Manhattan Bridge is captured beautifully here, with midtown Manhattan buildings behind reflecting the golden glow from the sunrise. Siebert took this looking west from Dumbo, four minutes and 57 seconds after sunrise, at an altitude of 325ft (99m) 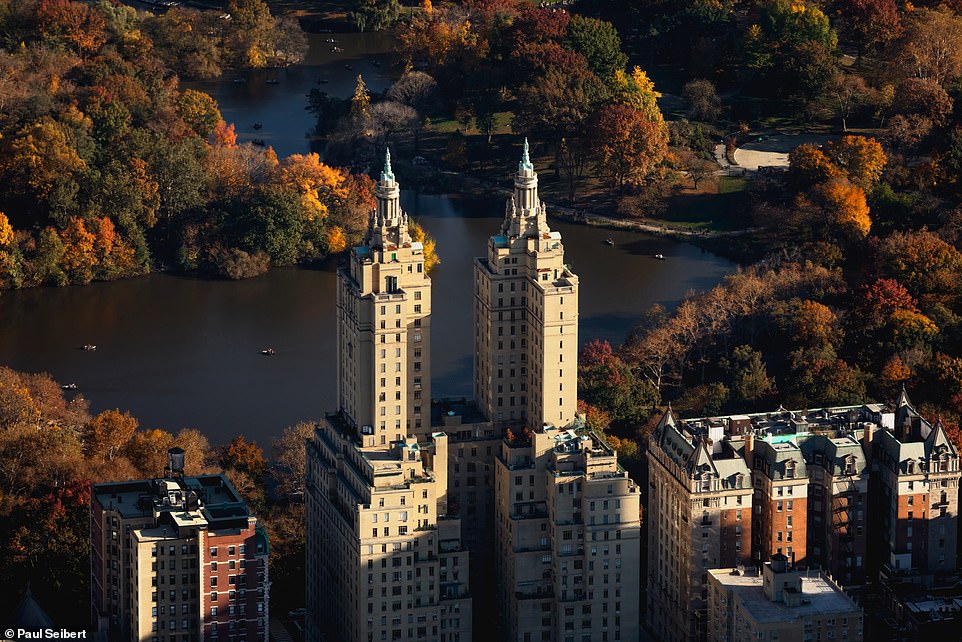 This photo shows luxury apartment building The San Remo – the first twin-towered building in New York – which overlooks the lake in Central Park. The picture was taken one hour and two minutes before sunset, at an altitude of 1,600ft (487.6m), writes Seibert 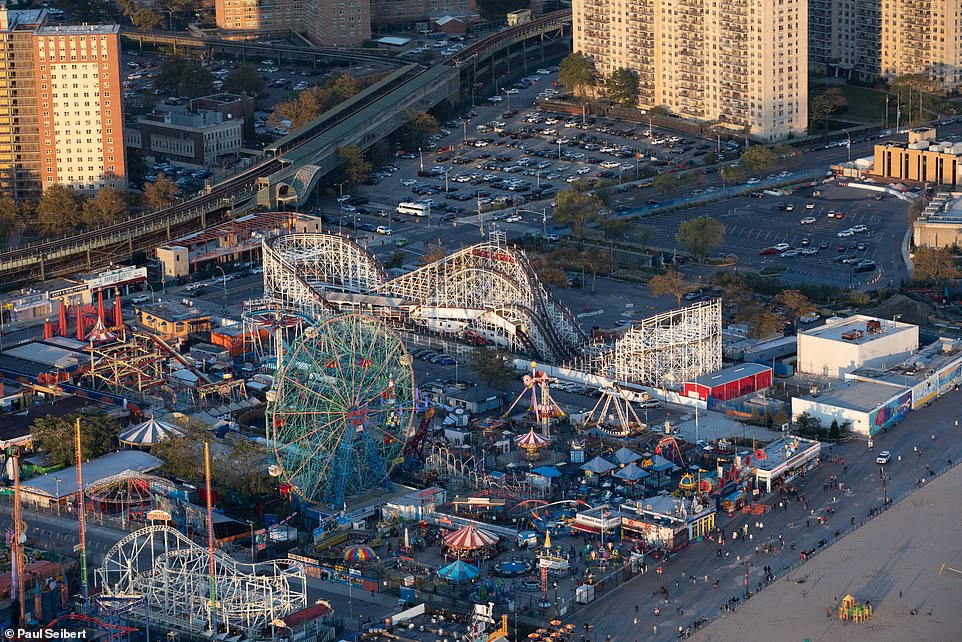 The retro landmarks of the fairground at Coney Island, Brooklyn, are shown here. They include The Cyclone, a wooden rollercoaster built in 1927, and Wonder Wheel, a 150ft (45.7m) Ferris wheel built in 1920. The picture was taken 25 minutes and 58 seconds before sunset, at an altitude of 1,200ft (365.7m), notes Seibert 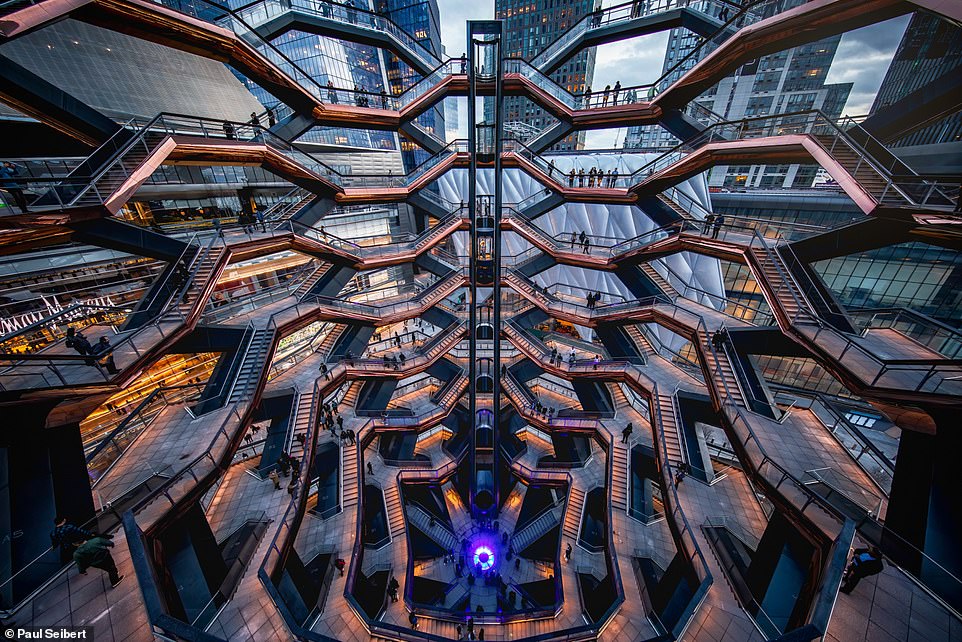 This mesmerising photo shows the unique spiral staircase of Vessel, an interactive artwork found in Hudson Yards, Manhattan. The picture was taken eight minutes and 44 seconds before sunset, at an altitude of 110ft (33.5m), writes Seibert