New York is OVERDUE an earthquake

When you think of the impending earthquake risk in the United States, it’s likely California or the Pacific Northwest comes to mind.

But, experts warn a system of faults making up a ‘brittle grid’ beneath New York City could also be loading up for a massive temblor.

The city has been hit by major quakes in the past, along what’s thought to be roughly 150-year intervals, and researchers investigating these faults now say the region could be overdue for the next event.

Experts warn a system of faults making up a ‘brittle grid’ beneath New York City could also be loading up for a massive temblor. The city has been hit by major quakes in the past, along what’s thought to be roughly 150-year intervals. A stock image is pictured

On August 10, 1884, New York was struck by a magnitude 5.5 earthquake with an epicentre located in Brooklyn.

While there was little damage and few injuries reported, anecdotal accounts of the event reveal the frightening effects of the quake.

One newspaper even reported that it caused someone to die from fright.

According to a New York Times report following the quake, massive buildings, including the Post Office swayed back and forth.

And, police said they felt the Brooklyn Bridge swaying ‘as if struck by a hurricane,’ according to an adaptation of Kathryn Miles’ book Quakeland: On the Road to America’s Next Devastating Earthquake.

The rumbles were felt across a 70,000-square-mile area, causing broken windows and cracked walls as far as Pennsylvania and Connecticut.

The city hasn’t experienced an earthquake this strong since.

According to geologist Dr Charles Merguerian, who has walked the entirety of Manhattan to assess its seismicity, there are a slew of faults running through New York, reports author Kathryn Miles in an adaptation of her new book Quakeland: On the Road to America’s Next Devastating Earthquake.

One such fault passes through 125th street, otherwise known as the Manhattanville Fault.

While there have been smaller quakes in New York’s recent past, including a magnitude 2.6 that struck in October 2001, it’s been decades since the last major tremor of M 5 or more.

And, most worryingly, the expert says there’s no way to predict exactly when a quake will strike.

‘That’s a question you really can’t answer,’ Merguerian has explained in the past.

‘All we can do is look at the record, and the record is that there was a relatively large earthquake here in the city in 1737, and in 1884, and that periodicity is about 150 year heat cycle.

‘An earthquake could happen any day, or it couldn’t happen for 100 years, and you just don’t know, there’s no way to predict.’

Compared the other parts of the United States, the risk of an earthquake in New York may not seem as pressing.

But, experts explain that a quake could happen anywhere. 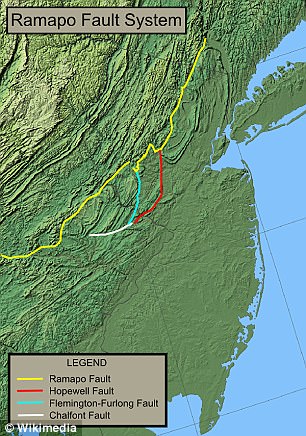 According to geologist Dr Charles Merguerian, there are a slew of faults running through NY. One is the Ramapo Fault

‘All states have some potential for damaging earthquake shaking,’ according to the US Geological Survey.

‘Hazard is especially high along the west coast but also in the intermountain west, and in parts of the central and eastern US.’

A recent assessment by the USGS determined that the earthquake hazard along the East Coast may previously have been underestimated.

‘The eastern U.S. has the potential for larger and more damaging earthquakes than considered in previous maps and assessments,’ the USGS report explained.

The experts point to a recent example – the magnitude 5.8 earthquake that hit Virginia in 2011, which was among the largest to occur on the east coast in the last century.

This event suggests the area could be subjected to even larger earthquakes, even raising the risk for Charleston, SC.

It also indicates that New York City may be at higher risk than once thought. 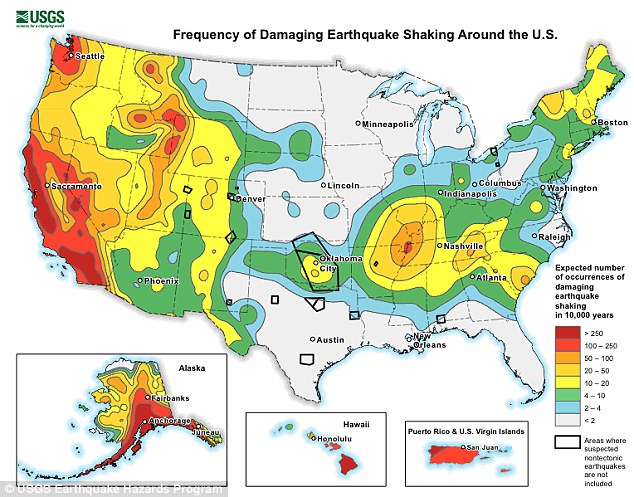 A recent assessment by the USGS determined that the earthquake hazard along the East Coast may previously have been underestimated. The varying risks around the US can be seen above, with New York City in the mid-range (yellow)

Given the population density in the region, a major quake in this area could be catastrophic.

But, in somewhat of a relief, the report also found that the threat to tall buildings posed by an earthquake in New York City may be lower than suspected.

‘In New York City, the maps indicate a slightly lower hazard for tall buildings than previously thought (but still a hazard nonetheless),’ the report continued.

‘Scientists estimated a lower likelihood for slow shaking from an earthquake near the city.

‘Slow shaking is likely to cause more damage to tall structures in contrast, compared to fat shaking which is more likely to impact shorter structures.’