The New York man who was left laying in a pool of his own blood by an NYPD officer who repeatedly smashed his face into the street following a Harlem traffic stop is suing the city for millions, his attorney announced Friday.

Kevin Diaby, 20, is seen in a gruesome viral video being punched in the head multiple times while pinned to the concrete by an unnamed police officer in a shocking Tuesday evening incident.

‘I’ve never been in no situation like this in my life,’ Kevin told the Daily Mail over the phone Friday evening. ‘I’ve never bled that much blood in my life. Seeing my own blood on the floor was crazy.’

Kevin, his sister, Fatou Diaby, 24, and a bystander named Christopher Johnson, 23, who all live in Harlem, were taken into custody by police after the traffic stop for alleged minor offenses.

The Manhattan DA’s office confirmed Friday that it is declining to prosecute any members of the trio, but did not elaborate further.

Kevin Diaby, 20, of Harlem, New York, is one of three people who filed a notice of claim Friday to sue the NYPD for a total of $14 million for alleged brutality

The incident began as Kevin was returning home around 6.30pm Tuesday after dropping off a friend at a nearby residence.

The 20-year-old told DailyMail.com he was parking his car near the corner of Fifth Avenue and 130th Street when a police car with two officers inside pulled up next to his driver’s side window. An officer in the cruiser’s passenger seat asked the young man for his license and registration.

Kevin said he has a learner’s permit and is in the process of getting his driver’s license, adding that the friend he dropped off nearby was a licensed driver.

He said a crowd began to gather around as the officers told him they were going to impound his car because he wasn’t a licensed driver and didn’t have the proper paperwork.

‘As soon as they pulled me over, everyone began to walk out,’ Kevin said. ‘That’s when the lieutenant told me if the people in the community weren’t putting him on the spot like that, he would have let me go loose.’ 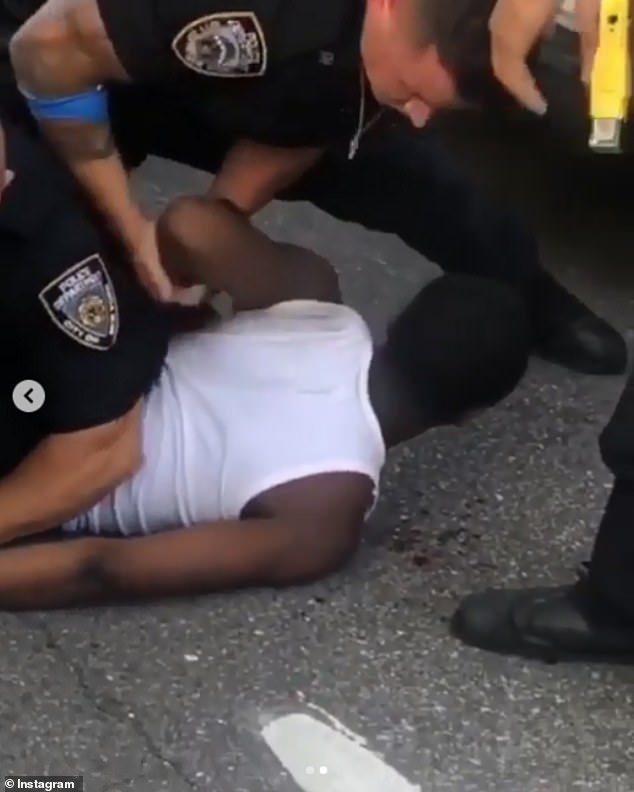 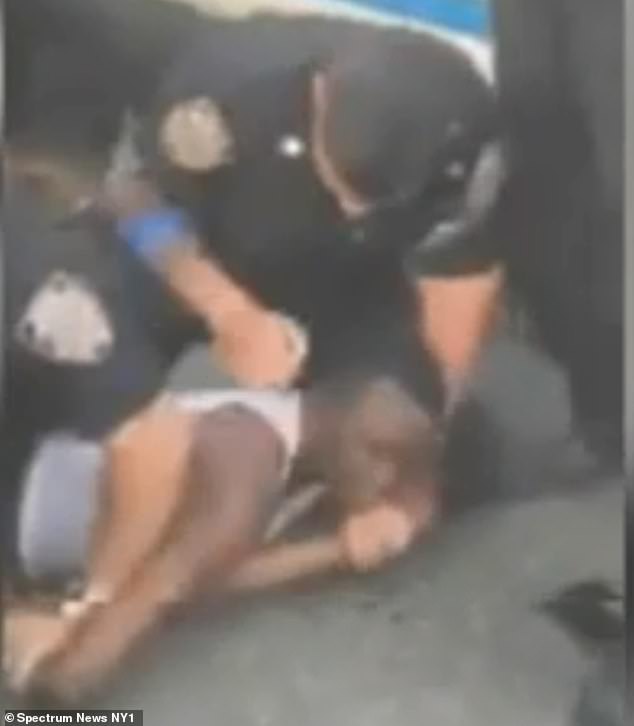 Police initially said they pulled over Kevin Diaby for failure to signal and that the 20-year-old didn’t have a driver’s license, insurance, or valid vehicle registration

Kevin’s sister, Fatou, ran to the scene soon after.

She told the Daily Mail she tried to reach inside her brother’s sedan to remove her cellphone charger as officers were attempting to impound the vehicle.

Multiple witnesses captured the incident on cellphone video before sharing the footage on social media. In one of the clips, a male officer is seen shoving Fatou away from her brother’s car as she tried to reach inside it.

A male bystander confronted the aggressive officer before being shoved as well. Seconds later, Kevin is seen on the ground being punched. At some point during the melee, someone threw a bicycle.

Kevin’s attorney, Elliot Kay, said his young client, a Binghamton University student with no criminal record, needed 12 stitches to close a gash above his left eye after the incident. 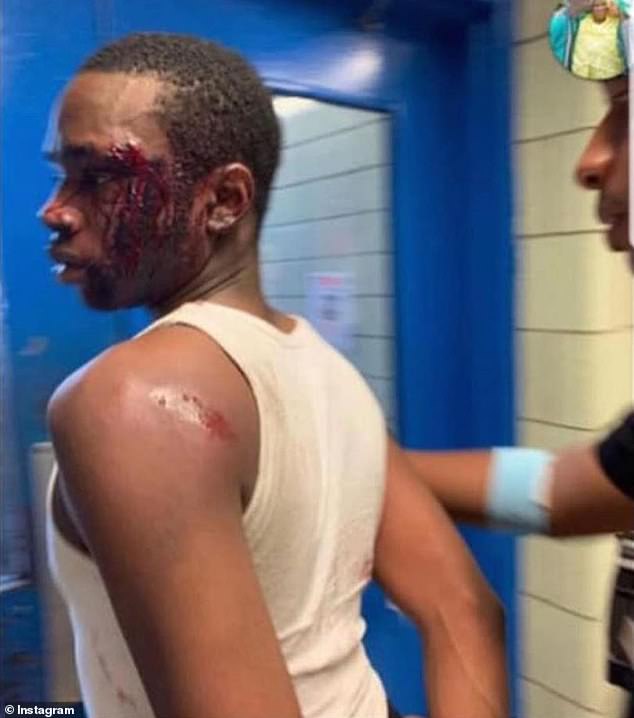 Kevin Diaby’s attorney, Elliot Kay, said his client needed 12 stitches to close a gash above his left eye after the incident 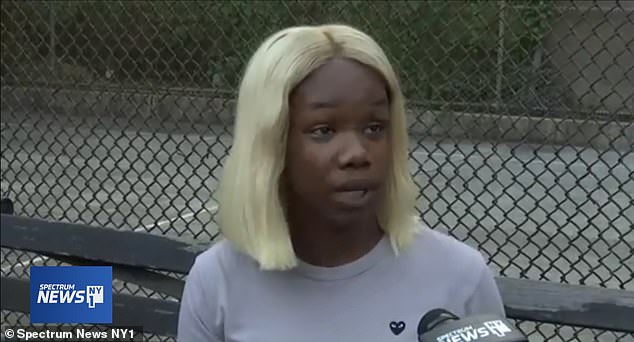 ‘His neck is messed up. He’s having difficulty moving it. There’s also numbness radiating through his hands. We’re going to have his neck and back checked out,’ Kay told the Daily Mail Friday following an afternoon press conference.

Fatou said she also received injuries to her wrist and hands after an officer grabbed and handcuffed her during the encounter.

‘My middle finger has, like, a blood clot in it. It’s very painful,’ she told the Daily Mail Friday.

New York Police initially said they pulled Kevin over for failure to signal after the incident.

NYPD Detective Sophia Mason also claimed Kevin was wrestled to the ground because he shoved a policeman who was attempting to impound his vehicle, which is why Kevin was initially charged with resisting arrest.

But video of the incident shows Kevin raising his arms in the air and backing away from an officer before being taken to the ground. 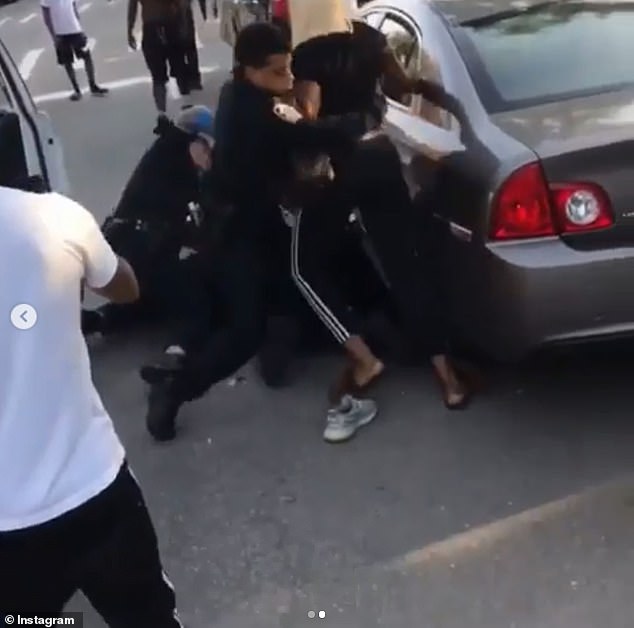 Diaby and his sister were arrested at the scene, but the Manhattan district attorney’s office confirmed Friday it is not pursuing any of the initial charges 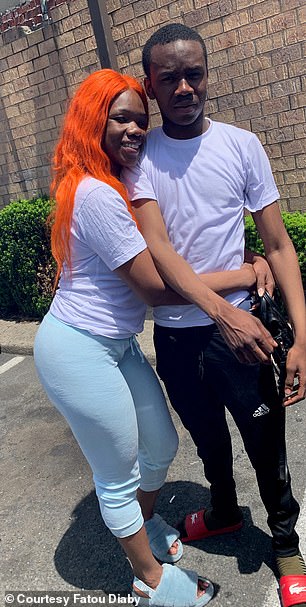 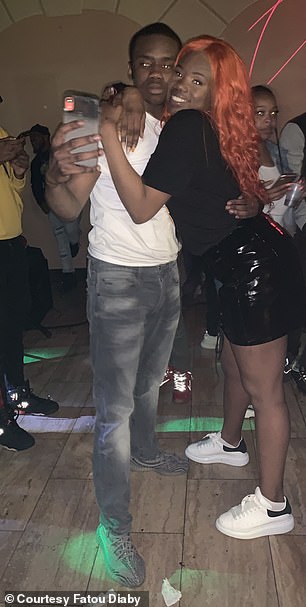 Police body camera footage of the incident has not been released.

Kay said his clients’ pending suit seeks $10 million in damages on Kevin’s behalf, $3 million for Fatou and $1 million for Christopher Johnson, who he said was tackled by police while filming the encounter.

The attorney said it appears the police who attacked his clients simply overreacted after a crowd gathered around them during their traffic stop.

‘The officers just lost their self control,’ Kay said. ‘When you have officers that are beating and assaulting members of the community, it’s going to erode the public confidence in law enforcement. People distrust police because this type of thing happens weekly if not more often. It’s just not always videotaped.’

Police refused to comment about city prosecutors’ decision not to pursue charges or the trio’s anticipated lawsuit.