Officers with specialized training to stop suicide bombers will be on patrol at Sunday’s New Year’s Eve celebration when up to two million people will flood the streets of Times Square in New York.

Police are promising a bigger security detail than ever before for this year’s event which will cap off a year that saw a number of deadly attacks on innocent crowds – including a vehicle rampage at the very spot where revelers will ring in 2018.

The stepped-up training is in response to an attempted bombing in a Times Square subway station walkway on December 11.

And it comes on top of increasingly stringent security for the city’s New Year’s Eve celebration in the years since the attacks of September 11, 2001.

In addition to its usual army of snipers, bag-inspecting officers and metal detectors, the department this year is relying on help from a growing corps of ‘vapor wake’ dogs, which are trained to sniff out trace amounts of explosive particles that trail behind someone carrying a bomb.

The NYPD is providing officers with specialized training to stop any suicide bombers at Sunday’s New Year’s Eve celebration. Above, security ahead of the 2015 event

More officers will be positioned throughout the area this year and all parking garages in the vicinity of Times Square will be emptied in advance of the celebration and sealed off, so no one has a chance to sneak in a car bomb, police said.

Police have said they will incorporate lessons learned from what they have labeled as three terrorist attacks in the city in the past 15 months, in addition to their ongoing analysis of all attacks worldwide.

That intelligence will form part of the massive security operation for the ‘ball drop’ celebration, a tradition that dates to 1907 and is now televised around the world.

‘You will see an increase in heavy weapons, bomb squad personnel, radiological detection teams, and our technology to include over 1,000 cameras in and around the area of Times Square for the event,’ the NYPD’s chief of counterterrorism, James Waters, told a news conference, two days before the event.

Officers involved in the New Year’s Eve security operation will receive a tactical bulletin and a training video on suicide bombers that they will be able to review on their department-issued phones starting Friday. 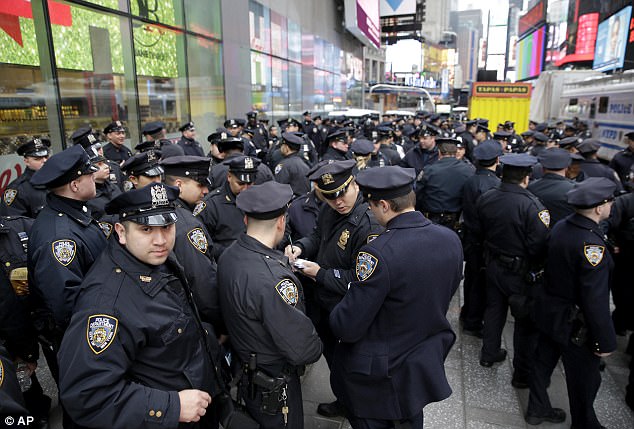 ‘We owe it to the cops to give them some kind of guidelines,’ Waters said.

The training material will include instructions on protecting bystanders if officers suspect someone has a bomb and guidance on apprehending and disarming suspects with the assistance of the bomb squad, he said.

Police will also be on the lookout for snipers in response to the mass shooting at a Las Vegas music festival on October 1, when a 64-year-old American opened fire from his 32nd-floor hotel room, killing 58 people and wounding some 500.

Detectives posted in hotels will keep an eye on guests, and additional emergency services and critical response teams will be on hand, Police Commissioner James O’Neill said. 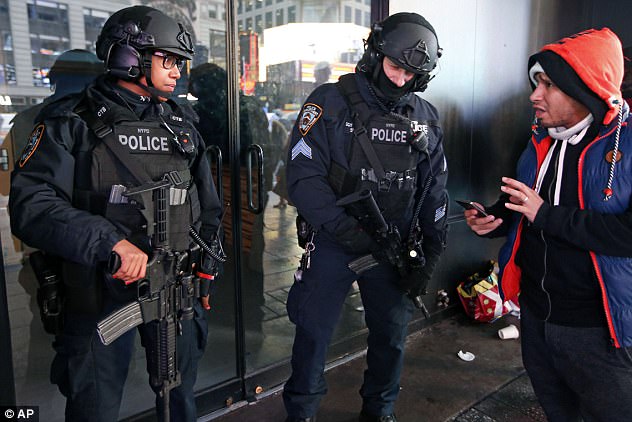 It comes on top of increasingly stringent security for the city’s New Year’s Eve celebration in the years since the attacks of September 11, 2001 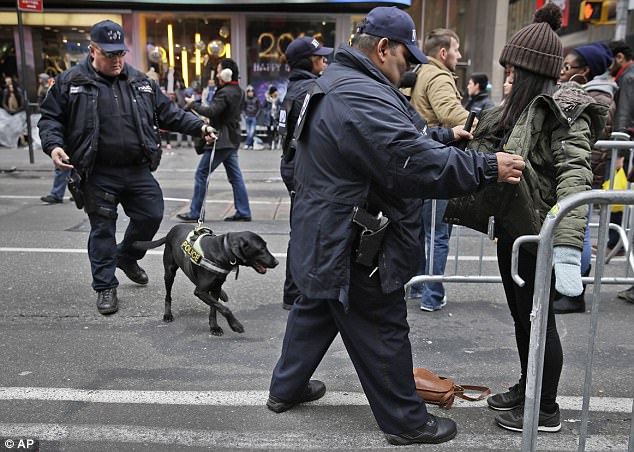 O’Neill declined to say how many of the department’s 36,000 officers will work on New Year’s Eve, in order to keep would-be attackers guessing.

People who want to see the New Year’s Eve musical acts and other entertainment up close in Times Square will have to pass by dogs trained to detect explosives and heavily armed officers, go through a magnetometer to check for weapons, have their bags inspected, and then repeat all those steps a second time.

Police will again use dump trucks filled with sand, police cars and cement blocks to close streets starting at 11am on Sunday. 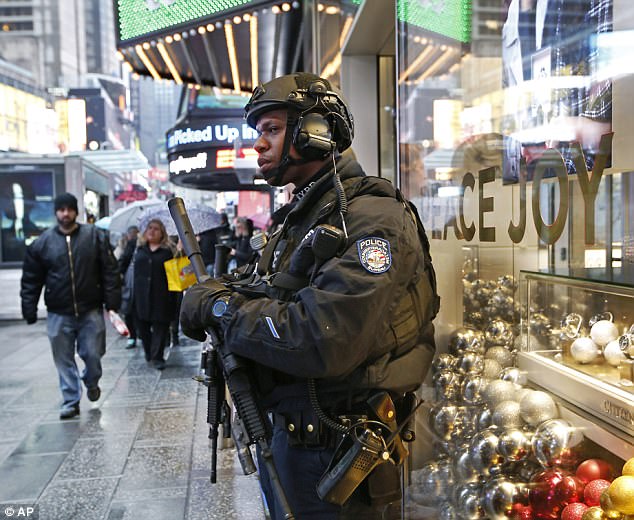 About 125 parking garages in the vicinity will be emptied of all cars and sealed.

Even so, police acknowledged a possible suicide bomber could manage to get close to large crowds of people before the checkpoints are set up, as evident by the December 11 attack.

On that day, police said, a Bangladeshi man set off a homemade pipe bomb strapped to his body in a subway pedestrian tunnel beneath Times Square, wounding himself and two bystanders.

Asked how to stop someone with such an intent, Waters said, ‘As a last resort: deadly physical force.’