The New York Times reporter behind the now widely-condemned article about Brett Kavanaugh is also the person who wrote an inappropriate tweet calling his alleged sexual assault of a woman ‘harmless fun’.

Robin Pogrebin is a culture reporter for the Times and is also one of two journalists behind a new book about Kavanaugh’s years at college.

She and colleague Kate Kelly, who is a Wall Street reporter, spent 10 months working on the book which they say focuses on Deborah Ramirez’s claim that Kavanaugh put his penis in her face in 1983 at a dorm party.

The pair have come under intense scrutiny for the fact that in an early online excerpt from the book, the Times left out the fact that another woman Kavanaugh was seen allegedly assaulting neither remembers the incident nor did she want to talk to journalists.

It is one of two controversies surrounding the story. The first was the tweet.

On Tuesday, Politico cited senior NYT staff who said it was Pogrebin who wrote the tweet.

Robin Pogrebin is a culture reporter for the New York Times. She allegedly wrote the widely condemned tweet but she refused to admit that during an interview with CNN on Tuesday (above) 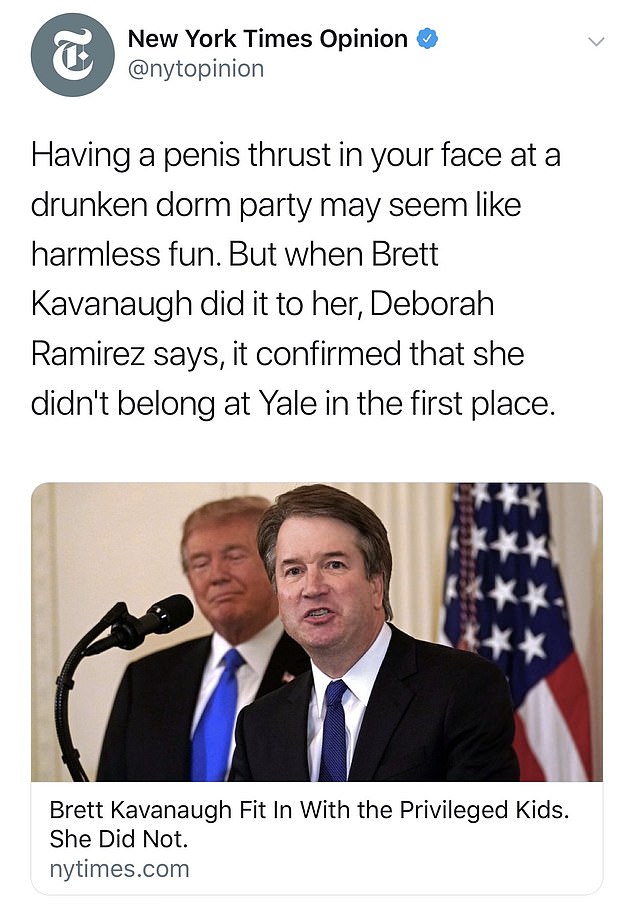 This was the tweet that was put out to promote the story on Sunday. An insider at the newspaper said it was ‘neglectful’ to let Pogrebin issue it without it being checked

She has refused to take responsibility for it.

When asked about it on CNN on Tuesday, she said: ‘We decided to not really try to excavate blame for this tweet but to realize in a vacuum it was ill worded and poor judgement and shouldn’t have gone out so we took it down and apologized.

‘All I can say is the tweet was written and the tweet was sent out and it shouldn’t have been sent out. I just feel like it’s a distraction to try to go back over that.’

Politico reports that Pogrebin wrote the tweet and sent it out without it being checked.

‘It was really neglectful. There were serious errors made along the way,’ the unnamed insider said.

The tweet was then deleted. Then, the NYT apologized for it.

Pogrebin and Kelly describe in their book how Max Stier, an old classmate of Kavanaugh’s, reported him to the FBI before his confirmation last year, claiming he saw him assault a third woman at a party. 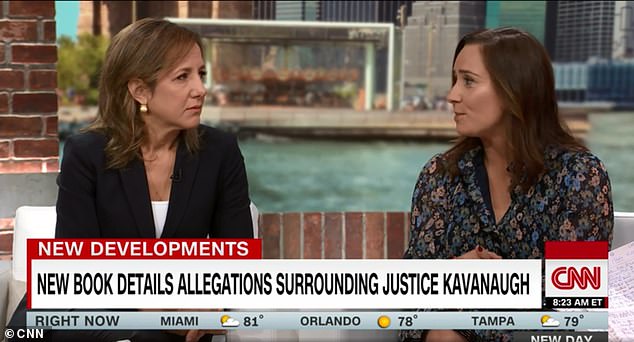 Pogrebin (left) with Kate Kelly, her co-author. They did a damage control TV tour on monday night and Tuesday

He said he’d seen him with his pants down, his penis exposed, and that Kavanaugh’s friends put his penis in the unnamed woman’s hand.

The woman has never come forward with her story and she did not report it to authorities.

However Kelly and Pogrebin name her in their book. She turned them down for an interview.

They say that the fact she’d turned them down and that she did not remember it were details that were taken out of their draft by Times editors who also snipped out the woman’s name.

This was the Editors’ Note which was added to the story on Sunday, hours after it went online

As the row over the story rumbled on on Tuesday, it also emerged that they approached their own news desk with the ‘scoop’ but that editors decided not to run a story on it because they did not feel it was ‘juicy’ enough.

It was punted to the Sunday Review section, where it appeared this weekend in the form of a book excerpt.

But many readers did not notice the difference and interpreted it as a hard news item.

Among critics of the newspaper’s handling of the entire debacle is its sworn enemy, Donald Trump.

He has tweeted repeatedly about the scandal. In his most recent condemnation of the newspaper, he said on Tuesday afternoon: ‘The New York Times is at its lowest point in its long and storied history. Not only is it losing a lot of money, but it is a journalistic disaster, being laughed at even in the most liberal of enclaves. It has become a very sad joke all all over the World. Witch Hunt hurt them.’

On Monday night, he tweeted: ‘I call for the Resignation of everybody at The New York Times involved in the Kavanaugh SMEAR story, and while you’re at it, the Russian Witch Hunt Hoax, which is just as phony!

‘They’ve taken the Old Grey Lady and broken her down, destroyed her virtue and ruined her reputation.’