By Cait Kelly and Reuters For Daily Mail Australia

A seven-year-old girl has convinced her country’s transport agency to change its ‘unfair’ road signs to be more inclusive of women.

New Zealand’s transport authority said on Tuesday it would adopt gender-neutral signs after Zoe Carew said it was ‘wrong’ to suggest only men could work on roadside power lines.

She spotted a ‘linemen’ hazard sign – which warn drivers about workers repairing or installing electricity and telecommunications cables – when she was en route to her grandparents’ house last month.

She took issue with the sign because ‘women can be line workers’ too and after a discussion with her dad decided to write a letter to the head of the New Zealand Transport Agency, Fergus Gammie.

‘Why does the sign say ‘linemen’ when the people working on the lines may be men or women?’ she wrote in the letter, which her mother, Caitlin Carew, shared on the social media site Twitter this week.

‘I think that this sign is wrong and unfair. Do you agree?’ she asked Gammie.

In a letter of reply posted to the agency’s official Twitter account on Tuesday, Gammie promised that authorities would replace old signs as they wore out with new ones reading, ‘line crew’.

Gammie said that ‘this may take some time,’ and praised Carew for speaking up.

‘I commend you for your suggestion and for taking action where you think something unfair should be fixed,’ he said, offering to have a photo taken with both of them and the new sign. 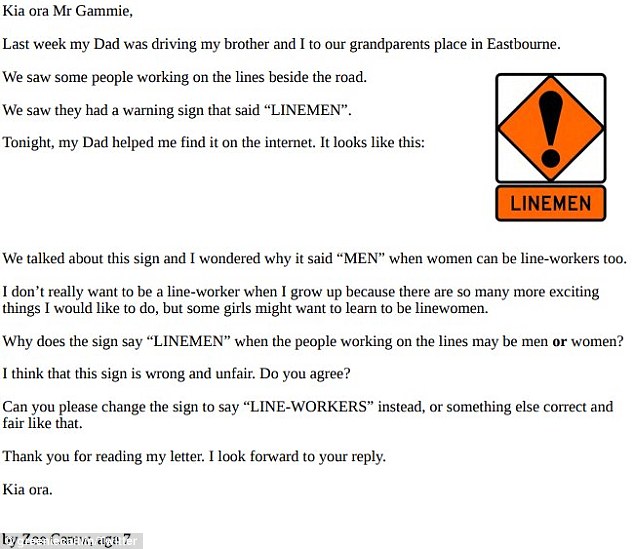 The agency also said in a Twitter post that it was happy to take on Carew’s suggestion as ‘great ideas can come from anyone, including seven-year-olds’.

Carew’s mother also annouced the news over twitter, saying that she was: ‘So proud of my seven-year-old.’

New Zealand has long had a progressive reputation and was the first nation to give women the right to vote in 1893.