A New Zealand farmer and his friend have had the fright of their lives after discovering a huge mysterious spider sitting precariously close to his front door.

In a spine-chilling yet hilarious video, the stunned friend of the farmer can’t believe his eyes as he sheepishly edges closer to take a look.

The farmer had been removing ivy from the side of his home in Waingaro, 140km south of Auckland, which revealed the gigantic spider lurking beneath.

The mortified friend is so shocked at the stature of the unsuspected guest, his eyes appear to bulge out of their sockets. 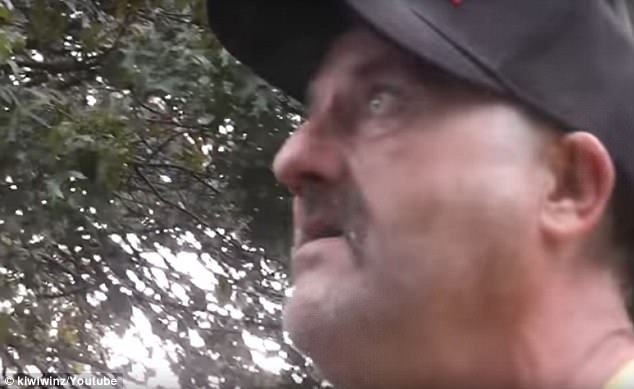 ‘I can’t get over that, that’s probably one of the biggest spiders I’ve seen. I’ve never seen a spider like that’ he said.

The two men speculated over the species of the spider, before deciding to move it away from the house.

Treading with caution, the pair use a rake to maneuver the eight-legged creature to the side of the house before transporting it out of harm’s way to a nearby fence.

‘I can’t get over that, that’s probably one of the biggest spiders I’ve seen. I’ve never seen a spider like that!’ the farmer’s friend revealed.

The spider is believed to be a giant Sheet Web spider, and at over 10cm long is four times larger than its average size.

Sheet Webs are renowned for their huge, piercing mouth parts, something the farmer’s petrified peer picked up on. 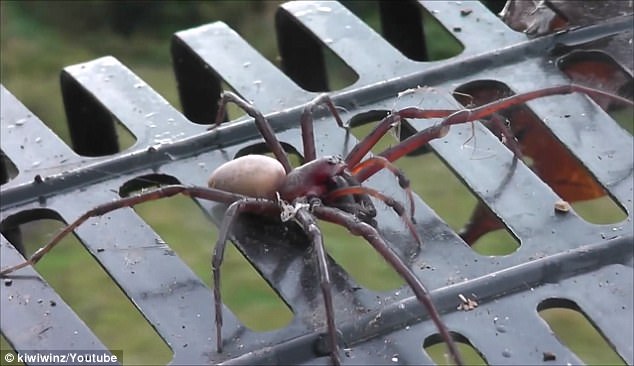 The spider is believed to be a giant sheetweb spider, and at over 10cm long is four times larger than its average size. They are also known to have huge, piercing mouth parts

The farmer, who appears a lot more at ease than his startled companion, manages to get a close up of the beast at the end of the video revealing the sheetweb spider in its full glory.

The video was shared to YouTube in March and has since racked up over 50,000 views.

Frightened as well as amused onlookers viewers took to the comments to have their say on the massive arachnid.

‘They got the biggest teeth I ever seen on a Spider, wouldn’t ever wanna be bitten by one!?’ one comment pointed out.

‘This is my favourite video of all time!’ another proclaimed.