If society suffers a cataclysmic societal collapse, New Zealand is the ideal place to be, according to a new study.

Researchers assessed the ability of countries to weather a series of disastrous events, including extreme heat, flooding and a viral pandemic even worse than Covid-19.

New Zealand was identified as the country ‘most resilient to future threats’, followed by Iceland, the UK, the Australian island of Tasmania and Ireland.

Being surrounded by water was a desirable trait to survive a global collapse, as it could protect borders from mass migration from other disaster-hit nations.

The experts say Earth is in a ‘perilous state’ due to ‘large and growing risks in ‘multiple spheres of the human endeavour’ – most notably climate change.

Worried about a cataclysmic societal collapse? Move to New Zealand. Experts found it’s the best location for survival in the face of a ‘major global shock’. Pictured, Banks Peninsula on the South Island of New Zealand

The study has been carried out by Nick King and Professor Aled Jones of the Global Sustainability Institute at Anglia Ruskin University.

Professor Jones ‘wasn’t surprised’ that New Zealand was top of the list, but was rather more taken aback by the UK’s strong placement.

‘We were quite surprised the UK came out strongly,’ he told the Guardian.

‘It is densely populated, has traditionally outsourced manufacturing, hasn’t been the quickest to develop renewable technology, and only produces 50 per cent of its own food at the moment. But it has the potential to withstand shocks.’

For the study, the experts examined countries’ self-sufficiency – their energy and manufacturing infrastructure – as well as their ‘carrying capacity’ – how much land they have available for arable farming and overall population.

They also considered their level of isolation, or their distance from other large populations that may be subject to disastrous ‘displacement events’.

The final five were found to be most suited to maintaining higher levels of societal, technological, and organisational ‘complexity’ within their own borders if a global collapse were to happen. 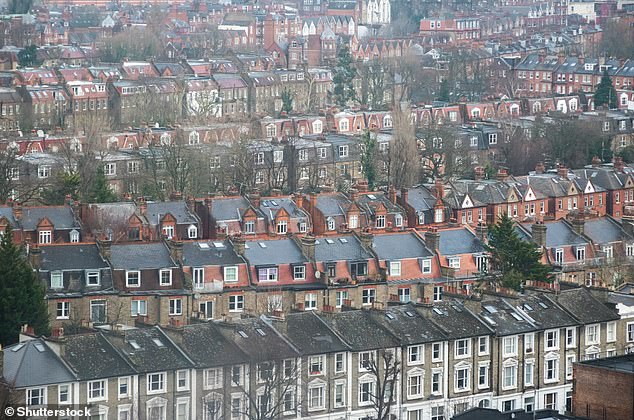 The UK is protected by water, although it has a high population density. Pictured, packed rows of terraced housing in London

They also have low temperature and therefore the greatest likelihood of relatively stable weather conditions, despite the effects of climate change.

Compared to the other four, New Zealand reached the top thanks to it having the greatest ability to produce geothermal and hydroelectric energy, its abundant agricultural land and its low population.

Iceland, Tasmania and Ireland also have favourable characteristics in this regard, the experts claim, while the UK presents a more complex picture due to its complicated energy mix and high population density. 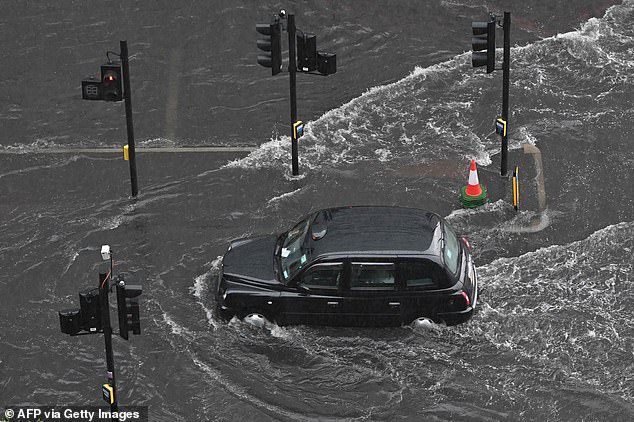 The study, published in the journal Sustainability, follows severe flooding in the UK. Pictured, a London taxi in The Nine Elms on July 25

The UK has generally fertile soils and a good variety of agricultural output, but it has low per capita availability of agricultural land, which raises questions about its future self-sufficiency, according to the experts.

The team conclude that a societal collapse could happen during a ‘long descent’, over years or decades, or very rapidly, in the space of less than a year, with no warning of the coming disruption.

The Covid-19 pandemic is one example of governments being unprepared for a disaster that became catastrophic relatively suddenly.

But humanity still has hope when it comes to offsetting a potential societal collapse, they claim, depending on future government responses.

‘Significant changes are possible in the coming years and decades,’ said Professor Jones.

‘The impact of climate change, including increased frequency and intensity of drought and flooding, extreme temperatures, and greater population movement, could dictate the severity of these changes.’

The study has been published in the journal Sustainability.

Deadly week-long heatwaves will be up to SEVEN times more likely by 2050 due to climate change, study warns

If greenhouse gas emissions are allowed to continue at extreme rates, deadly week-long heatwaves could be up to seven times more likely by 2050, a study has warned.

They found that record-shattering heatwaves become more likely not in association with the severity of global warming, but with the rate at which the climate heats up.

Under a high-emissions scenario, record-shattering, week-long extremes of heat will be 2–7 times more likely over the period from now until 2050 than they have been in the past three decades.

Read more: Week-long heatwaves will be up to SEVEN times more likely by 2050