A fun-loving photographer came up with a novel way to capture newborns this Holiday season, as she referenced the slapstick comedy National Lampoon’s Christmas Vacation in a themed photo shoot.

Amy Haehl of Coffee Creek Photography Studio said she had planned out the newly-released images, which reference iconic scenes from the 1989 classic, for well over a year.

Known for her humorous newborn photo shoots, the Indiana-based snapper said: ‘I love having a good laugh and love sharing the laughter with all of you. Figuring out all of the perfect little details and pulling this off has been quite an exhausting process and all I can say is… “Hallelujah! Holy s**t! Where’s the Tylenol?”‘ 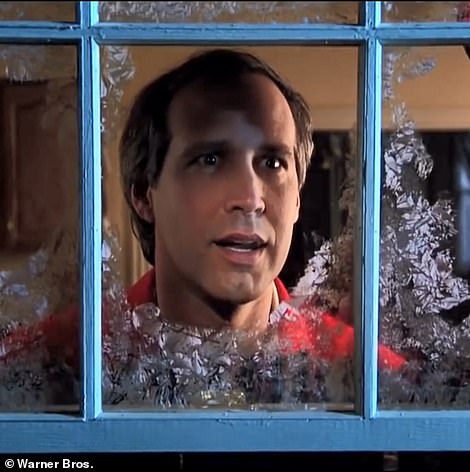 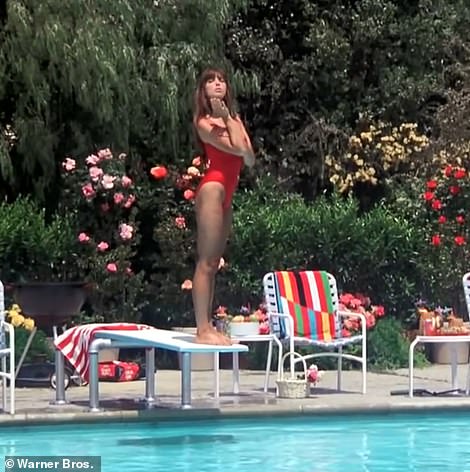 Captured: Amy had the newborns kitted out to look just like Chevy Chase’s character Clark Grizwold, left, and Nicolette Scorsese’s Mary, right, in their red outfits

The quote, of course, references the unforgettable line uttered by the movie’s lead, Clark Grizwold.

In the images, a newborn baby is styled to look just like Clark, who was played by the actor Chevy Chase.

One image shows a mini Clark styled in a festive red sweater and checkered shirt. Outside the window, a baby sleeps on a springboard in a long brunette wig and a red romper.

The hilarious parody is a play on the scene in which actress Nicolette Scorsese, as Mary, the lingerie counter girl, performs a tantalizing strip tease as she jumps into the yard swimming pool while Clark daydreams at the window.

‘That hair cracks me up,’ one woman wrote, referring to the sleeping baby’s wig.

A subsequent photo shows two sleeping tots on a sofa, while a faux mini Christmas tree appears to be burning in the background. 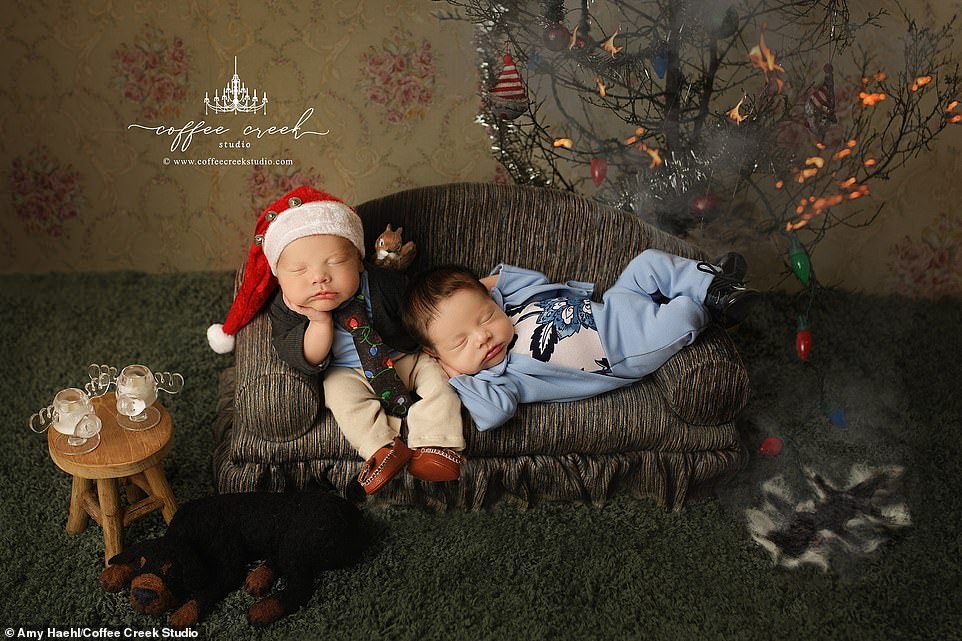 Reference: The two tots catch forty winks with the ‘burning’ tree and singed cat outline evident in the background 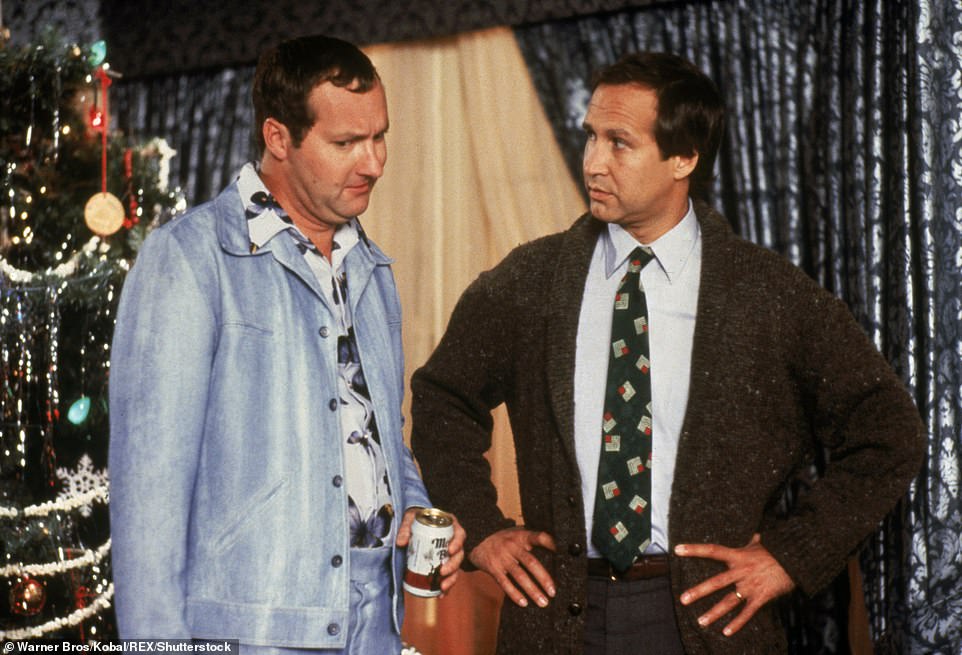 Outfits: The baby’s outfits were modeled after the characters’ exact looks – a vision that became a reality thanks to a local vendor who handmade the mini costumes 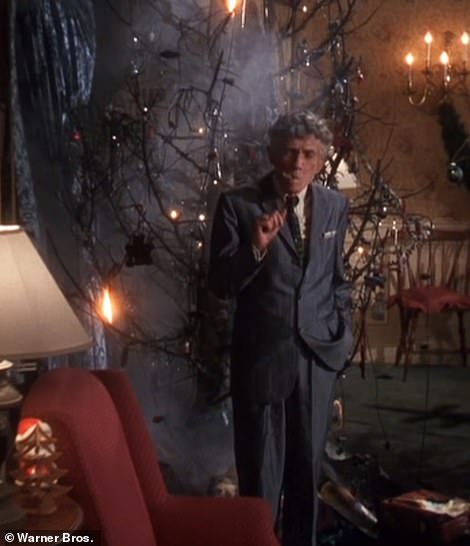 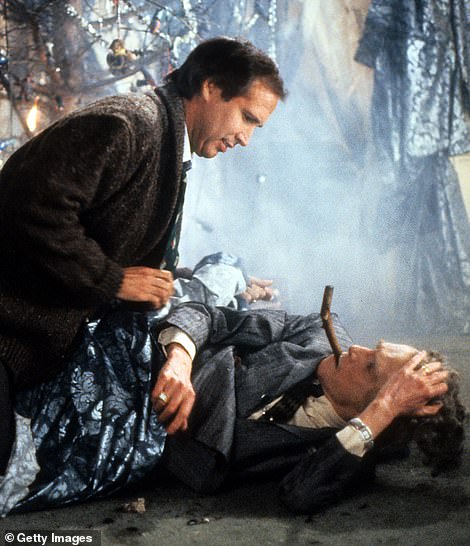 Flames: In the movie, Uncle Lewis memorably sets the tree alight and the cat gets electrocuted

For added effect, the outline of a singed cat is even evident on the carpet. According to trivia, the scene where the pet bites on the Christmas lights cord and gets electrocuted was almost cut from the movie.

In the movie, Uncle Lewis infamously unashamedly torched the Christmas tree with his cigar.

One baby is again dressed like Clark in an adorable little tie and loafers, while the other is kitted out to resemble Cousin Eddie in a miniature version of the character’s signature blue suit and wide-lapel shirt.

‘Once again, you have outdone yourself! Love all of these,’ a Facebook user praised.

Another applauded: ‘Amy, you win Christmas.’

Lastly, a hysterical photo shows a baby curled up on what’s supposed to be a bed of snow, resting beside a sewage pipe. 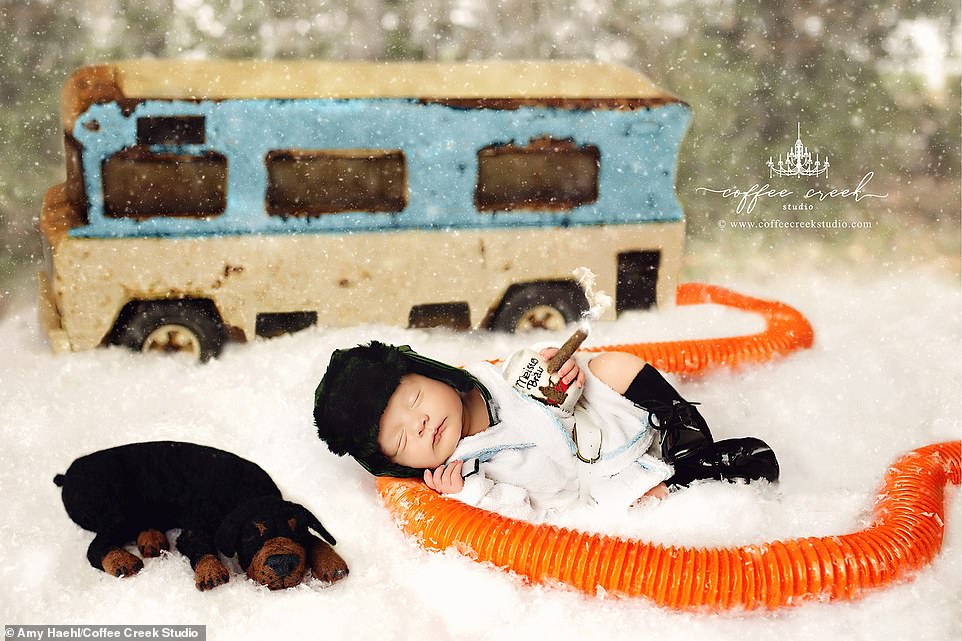 Props: One baby was modeled after Cousin Eddie in the scene where he dumps out his Winnebago’s tank in Clark’s yard; the scenario was made even funnier with the addition of the tiny beer can 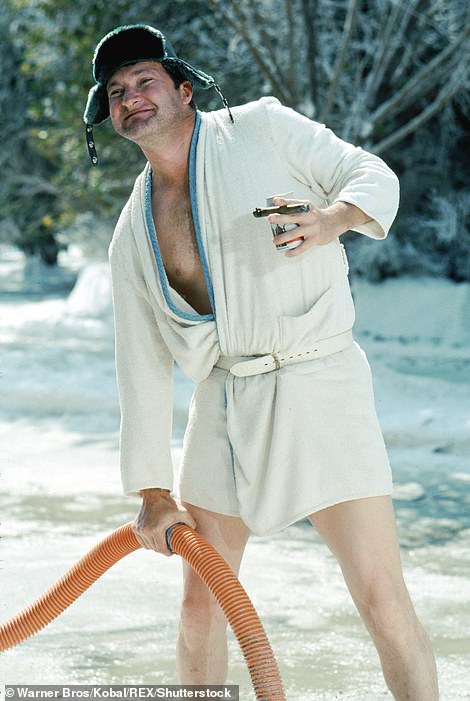 The scenario refers to the memorable scene in which cousin Eddie empties his Winnebago’s septic tank while sipping a can of Meister Brau.

The photo went down a treat online.

‘This is everything,’ said one woman while others agreed it was ‘awesome’.

Speaking to Insider, Amy said: ‘I’m a movie lover and have always loved this one in particular.

‘We watch it and laugh harder every year. I’ve always wanted to create photos based on this movie and have been gathering props for a while now.’

Said props – including vintage wallpaper, furniture, curtains, outfits, and the tiny RV in the sewage scene – were a ‘little challenging’ to source, but local vendors like Sunrise Baby & Co and JLS Creation Corner came through on the outfits and props respectively.

Amy added that she is grateful that many parents let her bring her visions to life.

‘I’m so thankful for the parents that allow me to photograph their babies in a humorous way. I can’t thank them enough,’ she said on Facebook.

‘I truly love my job, so being able to create photos that combine these two loves of mine is so rewarding,’ she said.