It could be a while yet before the riyal is trading stronger than the rouble in the Premier League. For now, Russian money sits at the top of the pile, and boy are Chelsea rich in talent.

But for all of their expenditure, it was a homegrown star who shone brightest here. The brilliant Reece James scored twice to break Newcastle’s resistance, which had lasted more than an hour before crumbling inside 15 minutes of defensive disorder.

The immediate concern for Amanda Staveley and the club’s new Saudi-led consortium is not the Champions League, but rather the Championship. That they remain just three points from safety is one of the few positives to which they can cling right now. 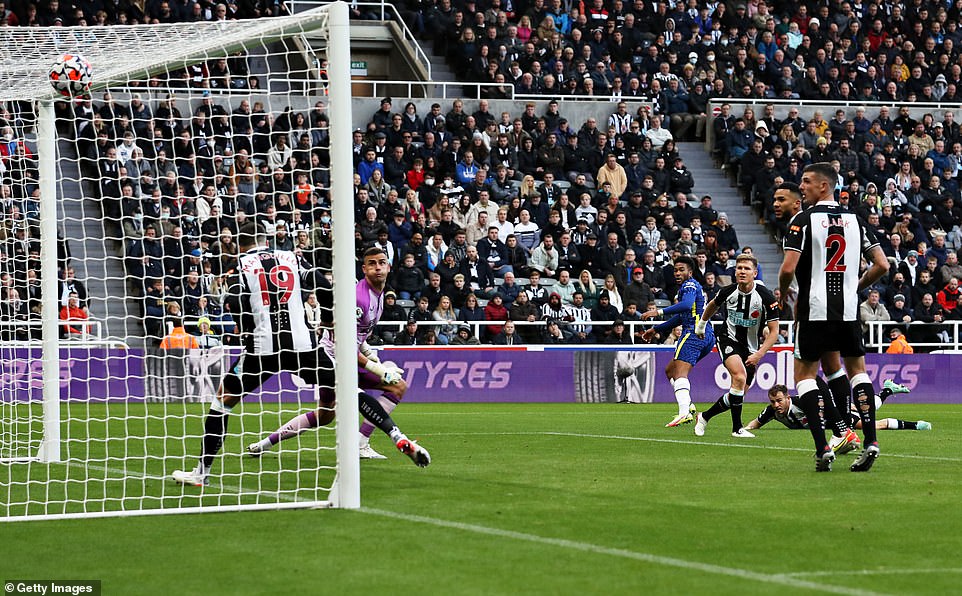 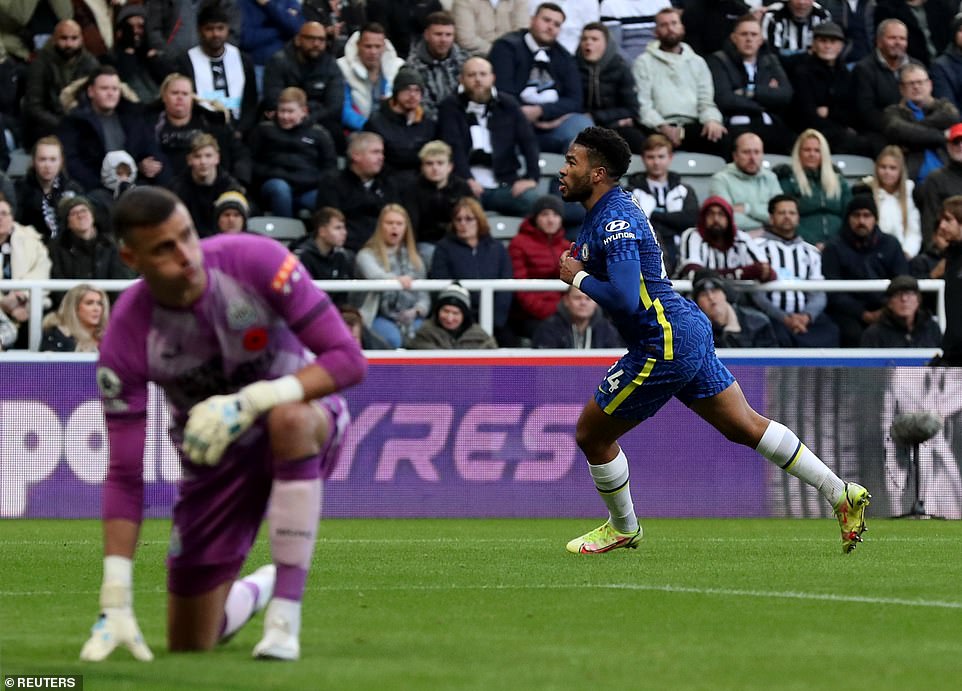 The visitors were forced to be patient, but found the breakthrough when James thumped a superb effort into the top corner

Interim boss Graeme Jones has scrapped days off in an effort to improve fortunes. He said it was ‘simple maths’ that more time on the training ground would give them a better chance come a Saturday.

What is another unavoidable mathematical truth is that Newcastle will have played another 10 matches by the time January comes around. Can you see them winning any of them, after going 10 without victory to date? Norwich at home, perhaps, for expectation in these parts is as low as the team’s league position.

Jones accepts that a ‘fresh face’ is needed in the dugout, and quick. Just look at the impact Tuchel had when replacing Frank Lampard last season. Within one training session he had cured many of Chelsea’s defensive ills.

Newcastle’s caretaker, in fairness, has attempted to address that end of the park during his 10 days in charge. But he is working with damaged goods, a legacy of both Steve Bruce’s management and Mike Ashley’s meagre investment.

What little confidence those players have is eroded at the first sign of setback, much like here when James blasted his first on 65 minutes.

Will that change with a new manager? They have to try, and the notion of leaving an appointment until during or after the forthcoming international break is as risky as some of their team’s passing.

Chelsea, by comparison, are mightily impressive and they refused to panic despite an hour of frustration – come the end they made their newly-gilded opponents look like paupers, brutally exposing the gulf in class that exists.

To think, Tuchel declared this week that Liverpool and Manchester City were the division’s standard-bearers.

He does not get much wrong, the German, but he did that – his side are the ones they have to catch this season.

For while their rivals stumbled yesterday, the Blues ran three points clear at the top of the table. 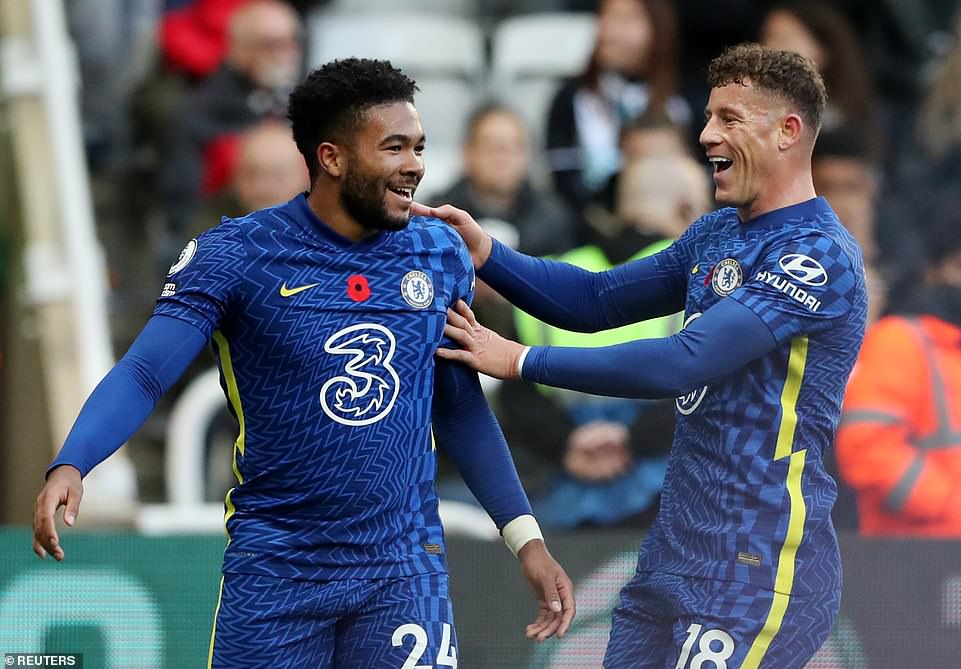 It was wing-back James who also scored Chelsea’s second goal, with his half-volley flying beyond goalkeeper Karl Darlow 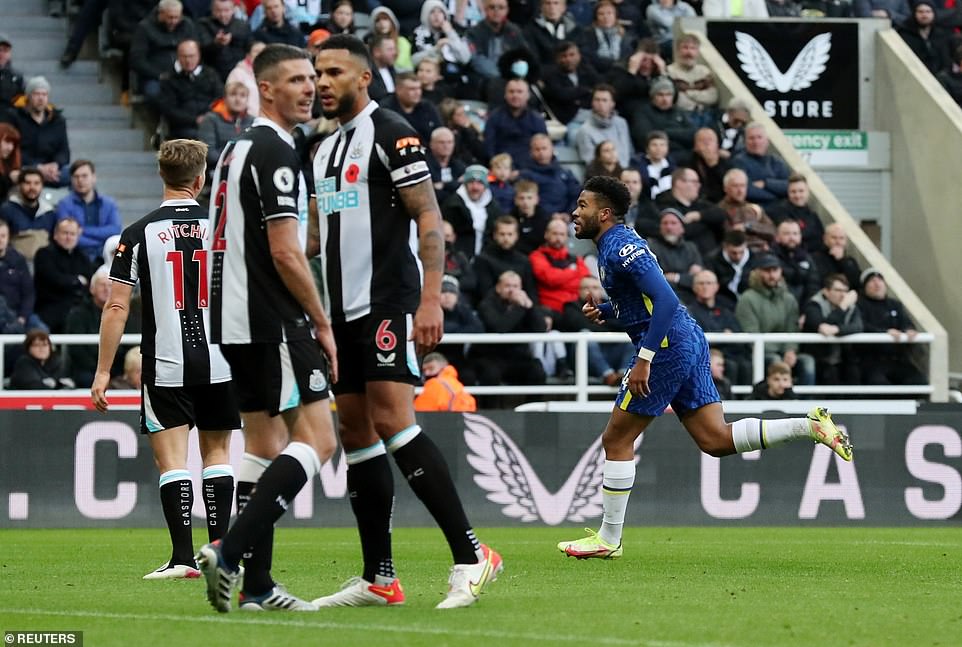 ‘We do not celebrate other team’s results,’ said Tuchel. ‘We need to have our feet on the ground. It is far too early. We can just focus on ourselves.

‘But I am happy today. We performed so well off the ball, that discipline was key. Newcastle tried to disrupt our rhythm. They defended with a low block, that is fair enough. But we were the deserved winners.’

There is no doubting Newcastle’s blueprint for improvement under Jones, it is there in black and white – 10 striped jerseys behind the ball, to be precise.

It has given their players a plan into which they can buy, and they did so with great enthusiasm for the opening hour. Pretty? No. Better? Maybe, although that is a low bar.

It is a brick-by-brick process, but Jones knows that the priority is to rebuild the defensive wall that once stood during the reign of Rafa Benitez. The locals will not tolerate such an unsightly approach long-term, and judging by the boos on full-time it is a tactic that is only justifiable by extracting a result from it. 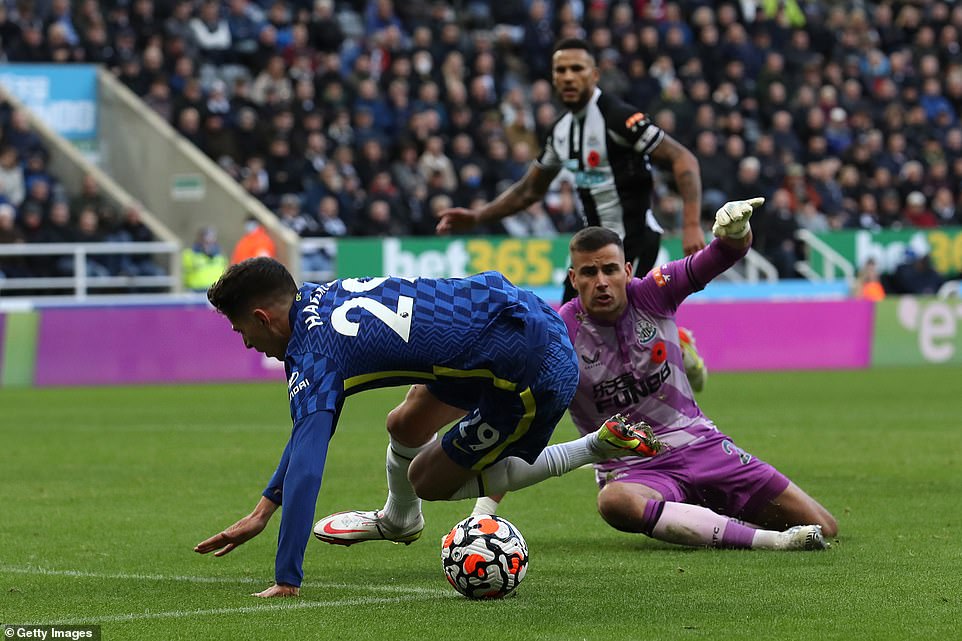 Darlow conceded a penalty with just under 10 minutes left of normal time, having clattered into Kai Havertz inside the area 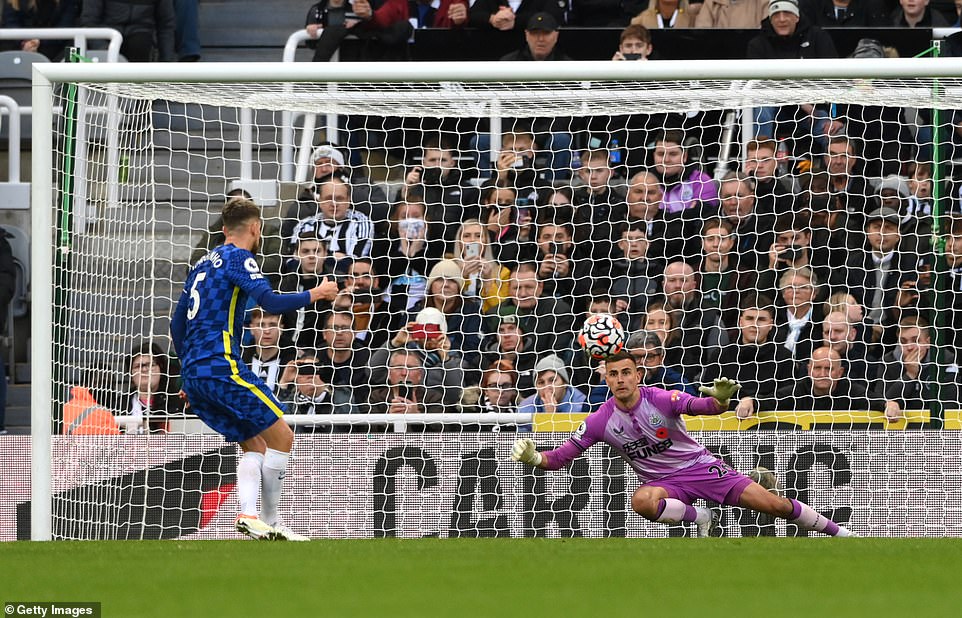 Jorginho stepped up to take the spot-kick, and the Ballon d’Or nominee beat Darlow from 12 yards with aplomb to add gloss 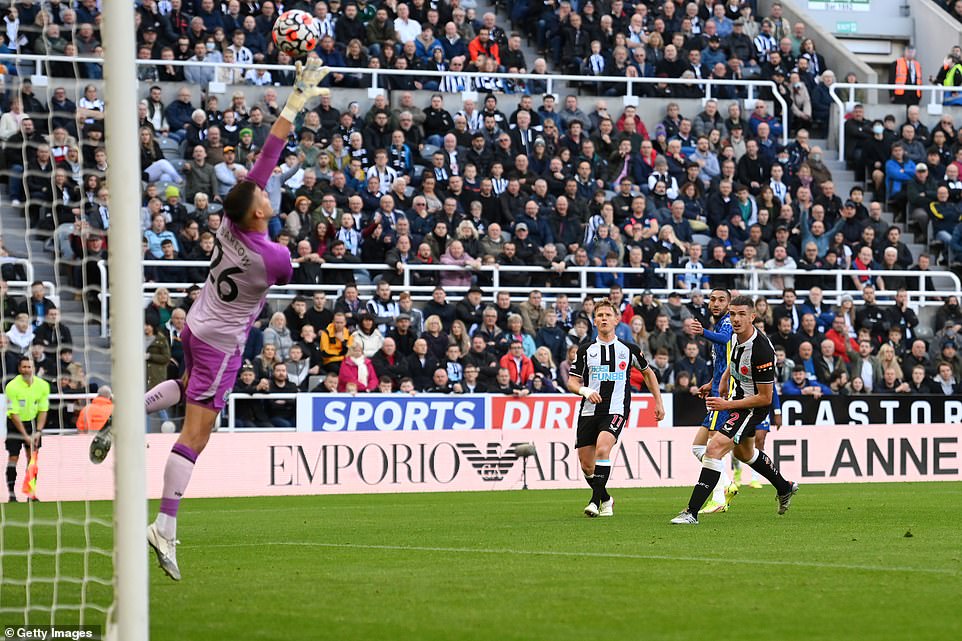 Hakim Ziyech saw a strike clatter off the woodwork inside the first half, which saw both teams struggle to make clear chances

The hope – forlorn for the large part here – is that they can spring the occasional counter-attack. They did achieve one such break inside 60 seconds and, had Ryan Fraser not delayed his cross in search of Callum Wilson, a quicker ball could have left his team-mate with a tap-in.

Goodness knows how deep they would have retreated had they scored. For even at 0-0 Newcastle’s three centre-backs had chalk on their boots from the six-yard line.

Chelsea’s chief threat was Hakim Ziyech during a first half of much possession if little penetration. Not that the winger felt like much of a danger when he volleyed into the crowd from six yards after James had swept across goal.

Ziyech did go closer early in the second half when a deflected shot spun onto the base of the post, but his afternoon was spent come the 64th minute when Tuchel made a double change. Within 60 seconds Chelsea were in front – now that is the difference a top manager can make.

Callum Hudson-Odoi escaped down the left and crossed to the far post, where James was afforded too much time to control and lash into the roof of the net. Tuchel pointed out that substitute Ruben Loftus-Cheek arriving inside the area had led to the chance for James, and he was right. 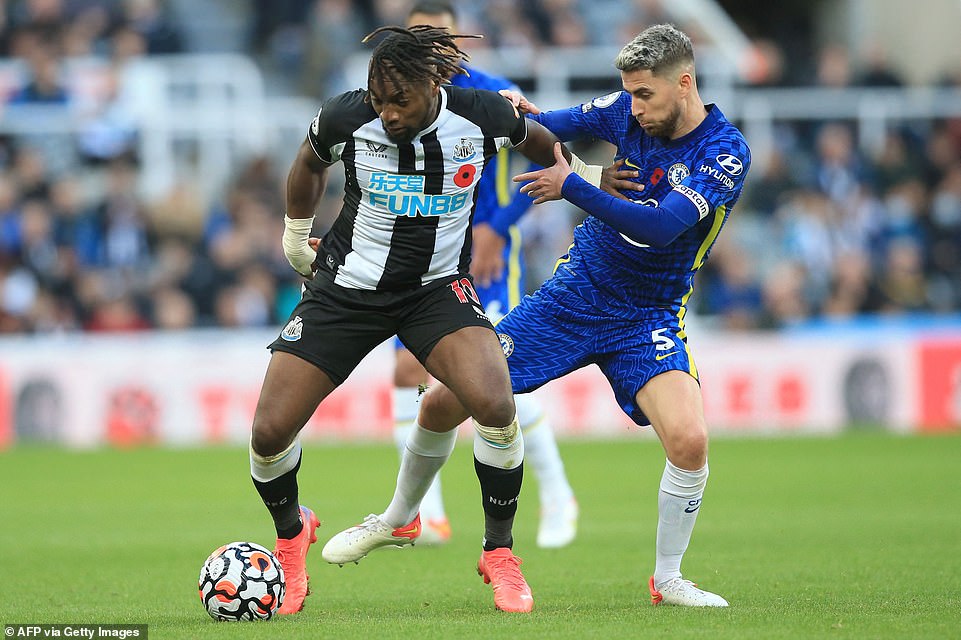 Allan Saint-Maximin, a rare bright spark for Newcastle in a dour season, was largely kept quiet by a well-drilled Chelsea team 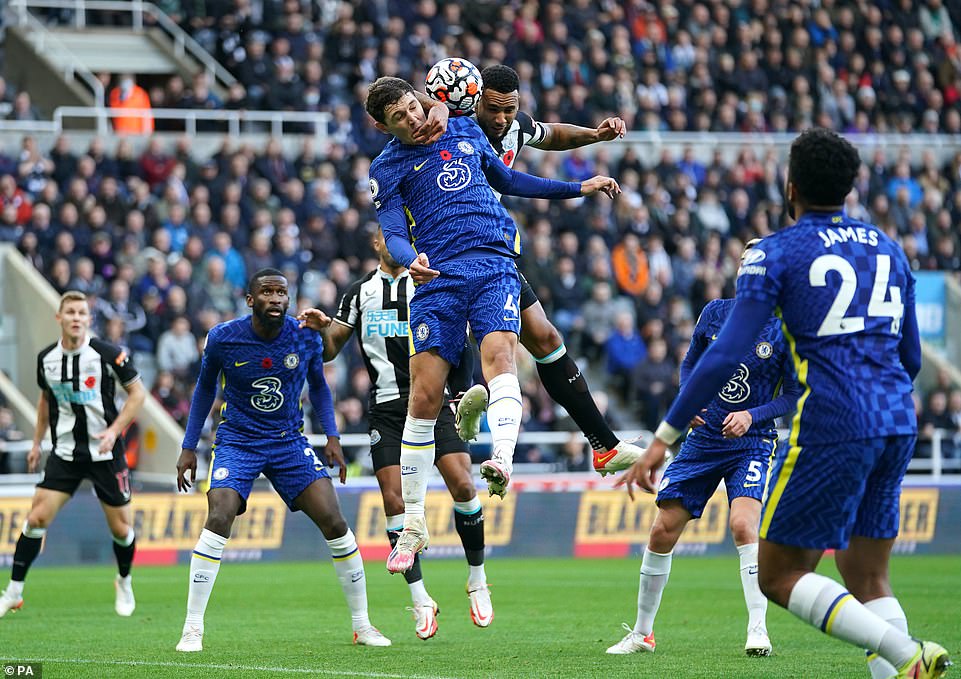 Jamaal Lascelles and Andreas Christensen challenged for the ball in the first half, with Chelsea going on to keep a clean sheet 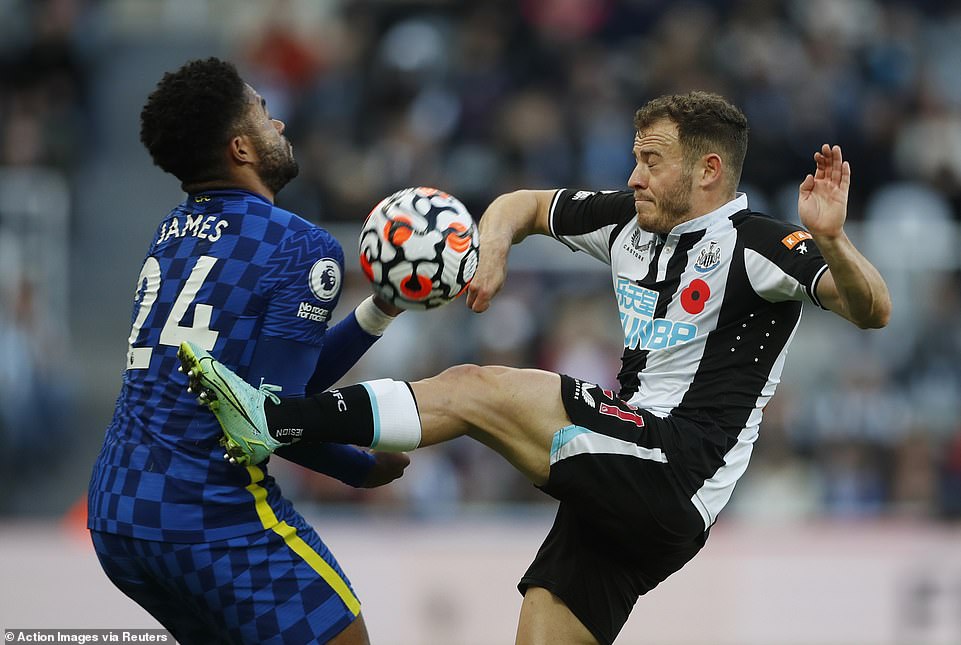 James was heavily involved throughout the clash on Tyneside, and had looked to rob tricky winger Ryan Fraser of possession

The wing-back’s second on 77 minutes was just as uncompromising a finish. The goal was gaping after Karl Darlow had dived in anticipation of a Loftus-Cheek shot that was blocked, and James duly swiped with zest into the unguarded target.

‘Reece has a kick like a horse,’ enthused Tuchel of his England international. ‘He found the space to score on his own. If we have players in all the places where we want to be dangerous, he is absolutely allowed to attack the free space or come inside.

‘We need the wing-backs to arrive in the box to our chances of scoring, and he did that.’

Chelsea’s scoring was complete three minutes later when Darlow tripped Kai Havertz and Jorginho clipped down the middle from the penalty spot.

The cameras cut to the directors’ box and, not for the first time, a solemn-looking Staveley. The co-owner had best get on the phone to Riyadh and release some riyals. If not, their dream vision could soon turn into a nightmare. 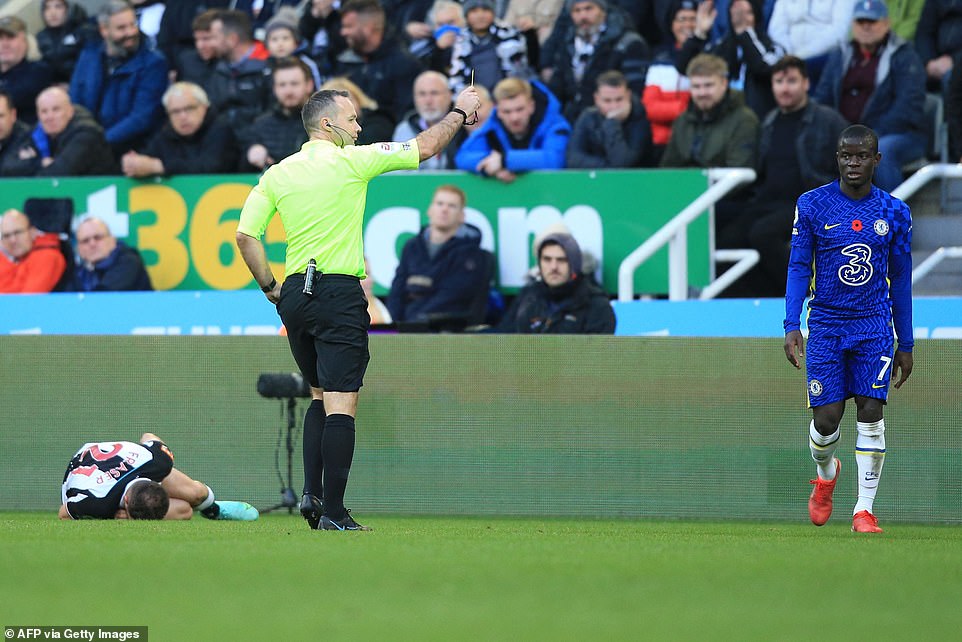 N’Golo Kante (right) was shown a yellow card for bringing down Fraser, before Chelsea went on to score their three goal salvo 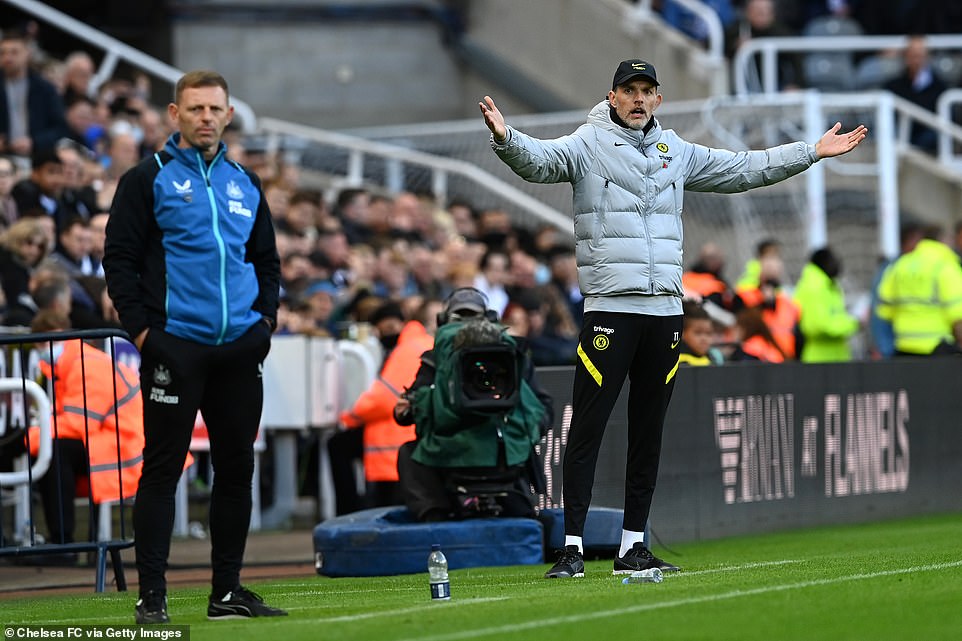 Blues boss Tuchel (right) initially cut an irritated figure on the touchline, while Graeme Jones (left) was made to suffer defeat 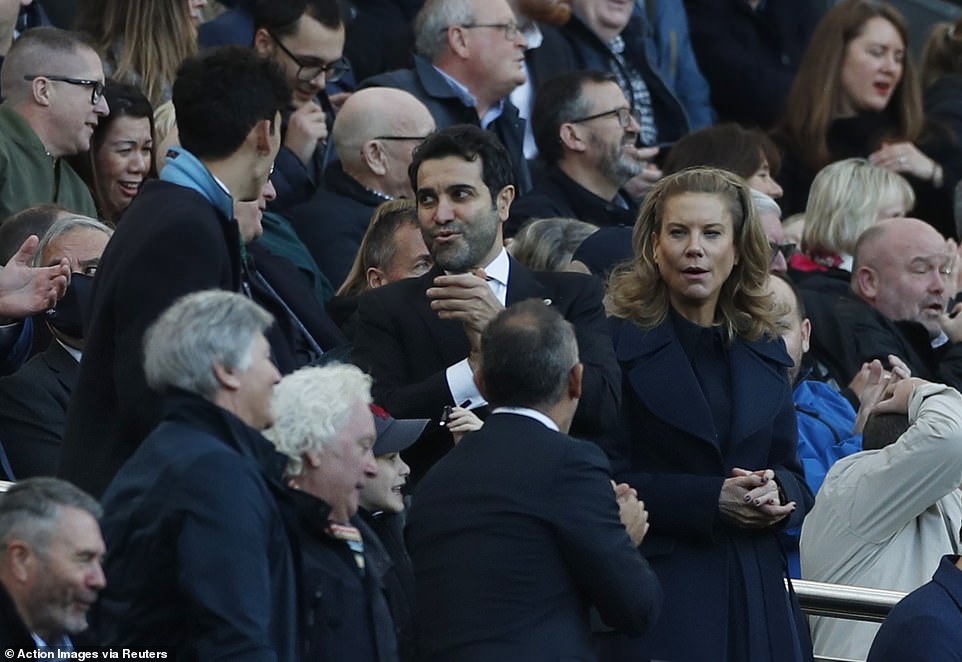